“These days many people, especially the middle-aged, put on a lot of weight in their abdominal area. They have cardiovascular issues, high-fat profile, blood sugar and hypertension. These symptoms are often clustered together as a set of conditions, together called metabolic syndrome,” said Asha Abraham, as we sat in her laboratory in the Loyola Centre for Research and Innovation (LCRI) at St. Aloysius College, Mangalore.

This condition is so frequent that it affects 25-30% of us today – spanning urban and rural areas. “It began as a disease of the old, then it was seen in the middle-aged, now even adolescents are affected.” In fact, these days even school children are known to develop these symptoms – “lifestyle changes are responsible…consumption of energy-dense food like burgers.”

Doctors usually treat affected people for individual symptoms. Only in recent times did it dawn on experts that most patients showed the whole set of afflictions, so the condition began to be referred to as an umbrella term. Still, there is yet no unified treatment for metabolic syndrome. Asha believes there is a missing link. “Since all of these symptoms occur in one individual, there may be a common starting point somewhere. I want to identify what this could be.”

It would be ideal to do the experiments on obese humans but this is neither safe, ethical nor practical. So biologists like Asha need a reliable non-human subject to perform the studies. ‘Model organisms’ such as bacteria, fruitflies, zebrafish or mice are good options. These animals are convenient for scientific experiments as they multiply quicker than larger animals. (In recent days, there have been efforts to create an ‘organ-on-chip’ which allows such experiments without the need of lab animals. See our report on Prajakta’s work on this technology).

Asha has chosen mice to study metabolic syndrome. She breeds the mice to mimic humans with this disease so that they are able to serve as a somewhat reliable model and the observations made on the mice will apply to humans, too.

Her challenge was to somehow make the mice exhibit the symptoms of metabolic syndrome. One way to do this is by putting them on a specific diet. When Asha looked for available knowledge on the subject, she found that mice fed a high-fat diet were most commonly used for such studies. This strategy did not sit well with her. “I felt this is not realistic because no one consumes just fat. People with metabolic syndrome consume a lot of carbohydrates, too.”

Energy-dense foods such as burgers and sugar-rich items, explained Asha, contain a lot of simple carbohydrates like sucrose, hydrolysed starch and maida (refined wheat flour). These simple sugars cause steeper spikes in blood sugar levels as they are easily broken down by the body, compared to more complex carbs found in whole grains and legumes. Asha felt it was important that her model mice were fed on a diet like this.

So, she and her team developed a particular diet called the high-fat-simple-carbohydrate diet to feed to the lab mice. “We found that within one month of this diet, the blood sugar level of the mice rose. In the following months, other parameters like cholesterol level also changed.”

Now that she was satisfied that her obese mice were worthy models of metabolic syndrome, the team went on to analyse various aspects of the disease right from onset to progression. They examined the changes in mice that the syndrome was causing. “We monitored how the mice accumulate body fat, checked various parameters like Body Mass Index (a measure that checks if you are the right weight for your height) and Lee index (a measure to predict the risk of cardiac problems) to estimate the level of obesity.” But most striking from their observations was the changes observed in the brain of mice.

Several studies on humans have noted that patients with metabolic syndrome are more susceptible to dementia and cognitive decline, but so far there has been no proof of this link. “Using our animal models, we are investigating this.” 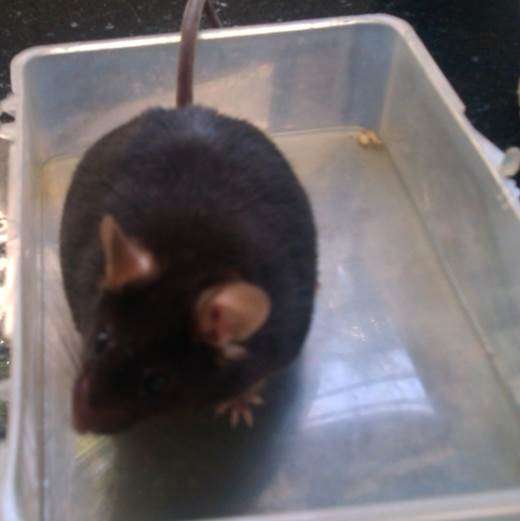 Affected animals are sacrificed and their brains analysed. To separate the different chemicals found in it requires the use of a popular technique called HPLC (High-Performance Liquid Chromatography). HPLC systems are generally quite expensive but Asha’s lab was able to procure one, thanks to a round of funding by the Indian government’s University Grants Commission (UGC).

Brain analysis using HPLC proved that these diseased mice had high levels of norepinephrine and low levels of dopamine and serotonin. These compounds are significant because they are neurotransmitters or chemical messengers transmitting signals through the nervous system, enabling our bodies to perform its functions.

In her model mice, Asha observed that such high levels of neurotransmitters are affecting feeding habits. “At first, the mice did not like the high-fat diet but soon they began to prefer it and we saw they consumed more than their counterparts (or control mice) fed a normal diet.”

When neurotransmitter levels get derailed, the regulatory centres in our brain that tell us to stop eating don’t work as well. This caused the mice to binge eat, a phenomenon commonly seen in humans too. “This explains addiction to fried items and high-fat food.”

She added: “Even juice has lots of sugar. Though fruits are good for health, juices are spiked with sugars like sucrose, which are easily assimilated by the body. People mistakenly think juice is healthy…”

From Kerala to Mangalore

After her BSc. in Zoology, the younger Asha decided that she wanted to study a more ‘applied’ science. But she didn’t have as many options as available today. It was 1989 and biotechnology in India was still not a popular course. In Kerala, where she grew up, Cochin University of Science and Technology (CUSAT) was the only college to provide an MSc programme in the subject. “Biotech was something new, I knew I did not want to do classical zoology.”

During her PhD, also at CUSAT, she got married and had both her children. Asha says she was lucky because her college and her guide were accommodating, plus her family was there to take care of the children. But when her chemical engineer husband got a job in Mangalore, Asha and her husband found themselves in a new city alone with their two-and-a-half-year-old son and six-month-old daughter. “I took a break for a year but after that, I wanted to come back to research,” she said.

Eventually, Asha got a place at the Fisheries College in Mangalore where she worked for more than two years on a post-doctoral fellowship from Council of Scientific & Industrial Research (CSIR). However, the fellowship was only for five years and Asha worried about what she would do afterwards. That’s when she saw a notice announcing that St. Aloysius was hiring faculty for their new MSc. Biotechnology department. She applied and made the cut.

Teaching suited Asha because it gave her stability at home. But like fellow scientist Smitha Hegde who we had interviewed earlier, Asha agreed that it’s not easy for teachers in private colleges to sustain their research. “Especially in biology, we are competing with research labs. While they do only research, here, teaching is primary and research is considered as something extra.” This meant that often, the quantity of output that comes from scientists like her are not equal to that of her peers in research institutions. Unfortunately, funding agencies consider this gap. “I may not have as many papers as full-time scientists. That is a limitation, but we manage.”

Asha has managed to keep a constant stream of minor and major projects going in her lab. She was able to secure another major project from the Department of Atomic Energy after making her metabolic syndrome discoveries. “The situation is not so dark. We need to find areas we are good at and highlight them while applying to funding institutes.”

Asha has had an even gender ratio so far with regard to her PhD students. She says that she has no problem hiring young women. But she conceded that she would want students she hires for projects to stick on until it is complete.

“I know those who want to pursue research will manage (irrespective of marriage, children) like I did.”

“I’ve managed because I’ve always checked my priorities and taken breaks when needed. God was kind to me; I didn’t have to face difficulties with money, otherwise, it might have been difficult. Anytime, I feel burdened I can give up something that is not so important to me.”

Kriti Keeps Our Satellites in Check

Smitha Hegde and Her Indomitable Ferns