The Life of Science
ARTICLES
12 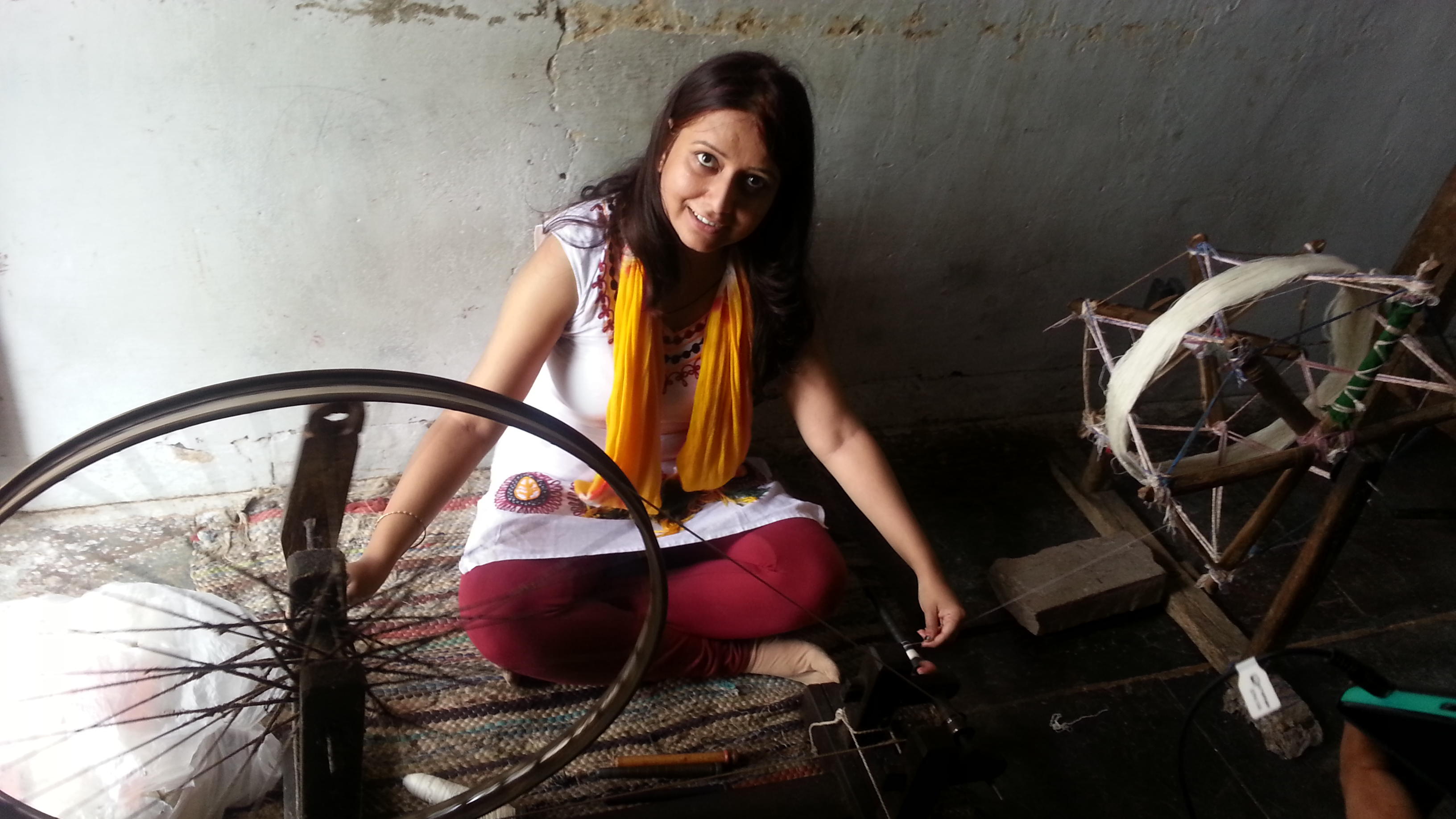 Cells, electrons or chemical bonds are not on her mind. Hemlata Manglani is a different kind of scientist – she observes the deposits in bank accounts of women in India.

Her research question is simple. Despite many government schemes, why is the socio-economic condition of some communities not improving? To answer this, she needs no microscope or particle accelerator, just a well-crafted questionnaire that can reach as many people as possible.

For her recently awarded Ph.D. thesis, Hema interviewed thousands of artisans working in three hundred printing enterprises across the Sanganer and Bagru regions of Rajasthan. “My work was focussed on the economy of Rajasthan, which is entirely based on exports. Artisans making blocks and printed fabric in these areas are an important part of this export-based economy. I wanted to explore the socio-economic conditions of these people who heavily contribute to this economy,” she tells me at her office at Central University of Rajasthan, next to the national highway connecting between Jaipur and Ajmer.

Among her findings, what stood out was the artisans’ low wages and poor socio-economic standards. In Bagru, where vegetable dyes are used for a completely eco-friendly production, their numbers are dipping dangerously low. “Artisans are disappearing from Bagru art because of the lack of a working policy. It is a completely unorganised sector,” she said.

Last year, Hema had a spark of inspiration from the first-hand experience of one of her Ph.D. students from Haryana. “The condition of women in her state is really bad. There is a high number of sexual harassment cases and the decision-making power of women’s groups is almost non-existing. She has herself struggled to get here and pursue her Ph.D., so that is why she wanted to work on women’s empowerment. That inspired me to go in that direction too. After doing some case studies we were convinced to do a detailed study in Haryana. That is when we sent a project proposal to the National Council of Women.” The project was accepted. Hema and her research partners are now preparing to leave for field studies in all five zones of Haryana.

As an economist, Hema has chosen one particular aspect of microfinance that is meant to help women help themselves: self-help groups. “These are part of the microfinance policies of the country. Women in villages, either self-motivated or assisted by the government, can create self-financing enterprises and create opportunities for income. It is not a job but more like a small business through which their deposits can increase. Two to three self-help groups can easily be managed in an average-sized village. Each group usually comprises 5-10 women.”

But despite these self-help groups and other microfinance schemes like Jan Dhan Yojna, Hema’s case studies revealed that the social environment for women’s groups in Haryana has not improved. “We need to understand why,” she stressed.

Hemlata on the field

Hemlata on the field

How to study a self-help group

The situation in Haryana and Rajasthan is one of the worst for women in the country, according to Hema. But thankfully there are encouraging examples of self-help groups in other states. Groups in Himachal Pradesh, specifically those studied by Hema in Mashobra district, have seen resounding success.

“Himachal Pradesh is number one when it comes to self-help groups. What we found there is that women are very educated and have a good life, in spite of the difficult terrain and difficulties in life. Education for the families there is supported by self-help groups. Their business has been rapidly increasing.”

“We interviewed people in Mashobra block and found that there were only two illiterate people, both old men who never went to school from the beginning. No female there is uneducated. And because of these women, practically the whole block is educated.”

“In every village in Mashobra block, there are two self-help groups. That is a very good number.” These women-led small enterprises owe their success to their own hard work and creativity in making and selling wooden artefacts at Lakkad Bazar, near the touristy Mall Road in Shimla.

For her next study in Haryana, Hema is currently preparing a preliminary survey that will help frame the questionnaire for the longer data collection procedure that will follow. Hema elaborates: “This will be an exercise in collecting data for all parameters – social, economical and political. All three parameters are important simultaneously to indicate how much empowerment rural women can gain from these self-help groups.

For the social parameter, interviews will grasp the level of decision-making power that the women are getting from these self-help groups.

To quantify political power, the study will find out if women are capable of getting into elections. How involved they are in local politics? Are they voting?

For the economic parameters we will study their savings, the number of accounts women have opened themselves, the deposits in these accounts – these will indicate how much they are earning from self-help groups.”

Sights from Hemlata’s work on the field

Hema at her office in CURAJ

The Economics department at CURAJ

The most tangible outcome of studies like Hema’s is policy implications. Emerging recommendations are handed over to funding bodies like the University Grants Commission and National Council of Women. Beyond publishing and presenting their findings, Hema and other researchers like her provide pointers to interested policy bodies. These pointers are meant to guide the government about where and when specifically the state should intervene.

“Ultimately, the legislature around these affected people should be reframed. In the case of women, their participation and contribution to social, economic and political life should be promoted by new legislative frameworks.” For example, in one such study concerning the condition of Beedi rollers in Ajmer district, the welfare policy implication that Hema handed to the government, via the UGC, prescribed an increase in their wages as their current wages are insufficient for them to afford their children’s schooling.

Following her socio-economic studies, Hema is in a good position to clearly identify ground problems.There are three basic ground problems, according to her:

First, the failure of women to make decisions themselves. “The contribution and participation of women in all spheres of social life should increase. This is the only target. We have many policies and schemes to empower women. But what we find is that they are not aware of their own rights. With these studies at least the awareness should increase. They are hesitating to accept their conditions and hesitating to come forward. We need to remove this hesitation,” she said.

Secondly, the oppressive customs and rituals that are underplay in all parts of India. “In Rajasthan, there are a lot of child marriages. Every Akshay Tritiya (a holy day around the end of April) many families fix the marriages of their children. There is also the custom of Naata Pratha, where without any marriage rituals or any officiating, a woman has to live with a man. Without any official status, women have to follow the family system with a man just because the families have agreed that they will live together. And the man’s family can leave her anytime, this happens.”

The third ground problem is sexual harassment, which Hema agrees exists not just in rural India, but also in the workplace. “It gives mental stress to women so they are unable to participate in social life. What I feel women should do is be stronger than all these hassles. I objected in my time. I did it because I could. All women cannot object,” she said.

Most educated person in the community

After she finished her post-graduation, Hema’s grandparents and extended Sindhi family objected to her wanting to continue her academic life. But Hema persisted and successfully dodged the ‘get married’ noose thrown at her from all directions.

Her mother, who she says she owes all her achievements to, supported her when no one else did. “From the first standard to the fifth standard, my mother taught us. She herself had studied only till the third standard but she was keen for us to go on. Because of her support, I am the most educated in our community, no one has gone this far, neither girl nor boy,” she boasts.

“Later on, my grandmother also realised that I was meant to go on studying because from the beginning I was a topper at my school and college. I was a national level debater, too. And I was awarded a lot of awards and trophies which spoke for me.”

“And I’m still not married. I am extremely happy with this. And now, so is my family.”

The Author The Life of Science