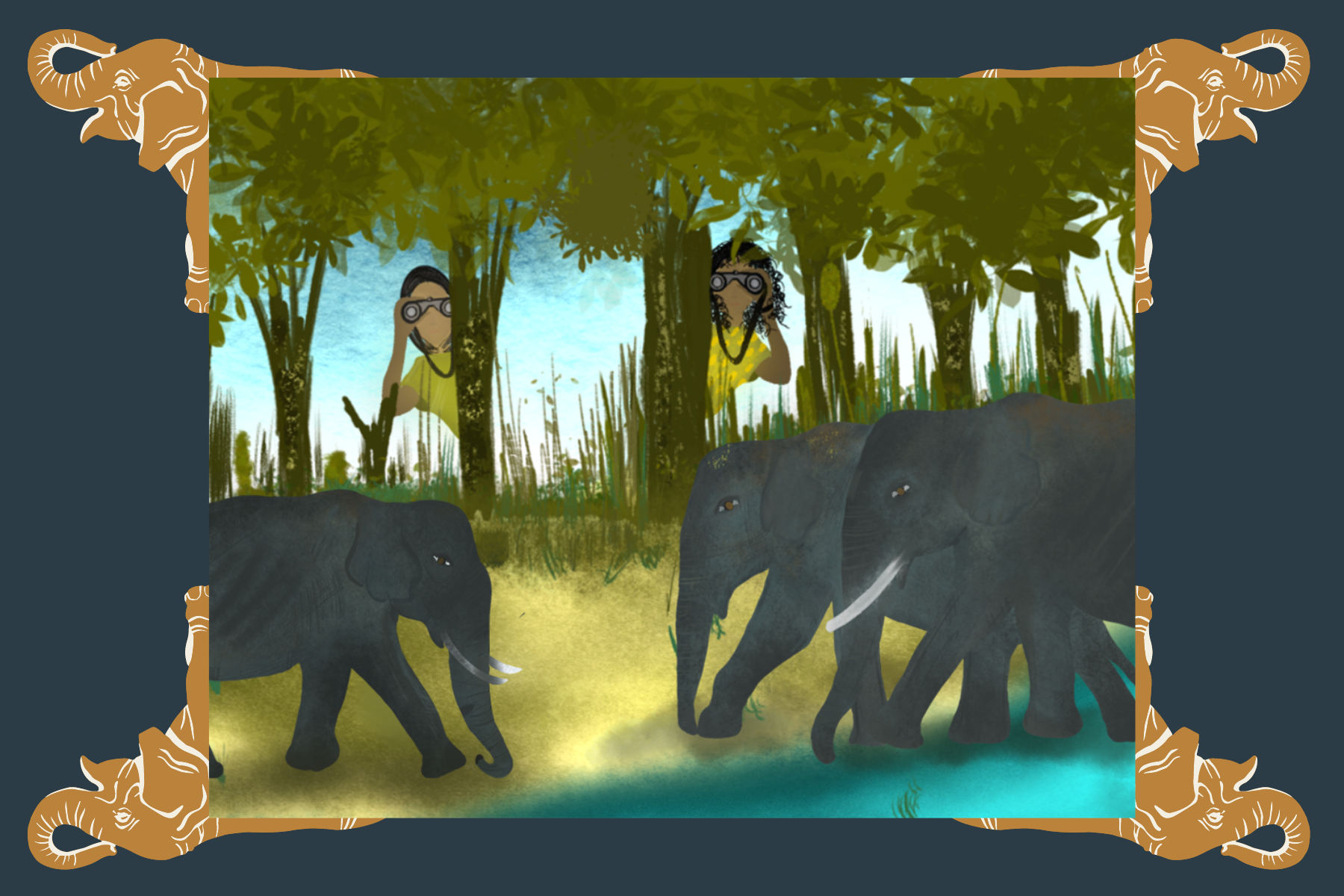 Though geographically quite distant from each other these days, Nandini S. and P. Keerthipriya regularly catch up over Zoom calls to reminisce their time on the field studying wild elephants. They spent much time together at the Kabini backwaters when they were both pursuing doctoral research at Jawaharlal Nehru Centre for Advanced Scientific Research (JNCASR), Bangalore.

Camouflaging among the trees, the field biologists would observe elephant behaviour at the Kabini backwaters that partition Nagarhole and Bandipur Tiger Reserves in Karnataka. Nandini and Keerthi made sure to conceal themselves from the elephants. Though the elephants have poor eyesight, their extraordinary sense of smell allows them to pick up scents over a few kilometres. “Forest is an entirely different world. I can’t express the joy I felt when I saw an elephant for the first time,” Nandini said, when I caught up with her for an interview. After a masters in biosciences, she was pretty convinced that a PhD was the way to go. “I was fascinated by evolutionary biology but animal behaviour intrigued me too,” she said, “When I applied for a PhD program at JNCASR, I realised that Prof. TNC Vidya’s lab offers the best of both worlds.” 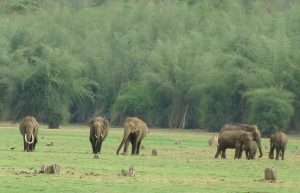 Two males with tusks on the left and females on the right. Credit: Kabini Elephant Project.

For Keerthi, the fascination with elephants developed early in childhood, during the times with her grandparents on their farm in Salem. “My uncle had plenty of goats and cattle. I took them to graze with my cousins. My mother would send word through multiple people to have me home for meals, but I would hang around in the field with the animals for as long as I could.”

A heartwarming video of a baby elephant has been floating over social media recently where it follows the Tamil Nadu forest officials, reportedly to be united with its mother. Such pleasing news is rare though. “There are numerous more dismaying instances of elephant deaths due to electrocution or train collisions,” Nandini said. With increasing forest loss, degrading habitats and forage quality, human-animal interactions are becoming more and more tense, she explained. “Studying elephants is the key to better management of human-elephant conflicts and the conservation of elephants.”

“Studying elephants is the key to better management of human-elephant conflicts and the conservation of elephants.”

Be it elephants or human beings, all social animals display a wide array of behaviours. Animal behaviour is known to be formed and moulded by many factors including food resources, mates and competition. Unlike most human groups, elephants have complex and elaborate social herds that are led by the oldest female.

Keerthi has had close encounters with such herds. “Elephants foraging on vast lush grasslands, a few male elephants interacting with their trunks extended towards each other, some cooling themselves off in the glistening water at Kabini…” she recollected what their summer field days looked like. Summers are a good time for ecologists to make observations because many herds linger around the backwaters all day. “Fairly good visibility in grasslands at Kabini aided in field observations, which is why we chose it as our field site,” Keerthi said. “However,” Nandini pointed out, “during rains, elephants stay inside the forest and following them was a bit tedious.” 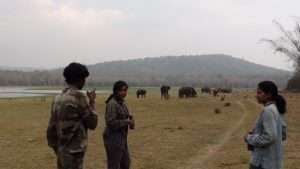 Keerthi (centre) and Nandini (right) along with their colleague Krishna, observing elephant activities in the field. Credit: Kabini Elephant Project

While female elephants grow up to adulthood in a clan, male elephants or tuskers begin to disperse from their natal groups as they hit puberty. After moving out, males spend most time foraging and sauntering alone in the forest. They might spend some time with mixed-sex groups that have adult females, young ones and sometimes one or two adult males.

“Differences in the male social organisation of Asian elephants and African savannah elephants that occupy similar habitats possibly arise from differences in ecology,” Keerthi and Nandini proposed in their latest study.  There is some understanding of how old males in musth [period when a male elephant is sexually active] associate with other elephants, but Keerthi and Nandini’s study was an examination of non-musth association among old and young adult males. Their research showed that unlike in African elephants, learning about food and mate resources from old adult males did not seem crucial for young adult Asian elephant males.

The males were said to be associating with females when they were close to the female group and showed coordinated movement. On the other hand, males were said to be associating with other males if they fed within 50 metres of each other in absence of females. “At about this distance males can display or react to visual signals, apart from sensing each other through smell and acoustics,” said the authors in their study. They found that males over 30 years of age were sighted more frequently with their age-peers than with young adult males. Even the young adult males were not keen on associating with old males and spent more time in mixed-sex groups: “Associations between non-musth elephants were temporary but were affected by male age and presence of females.” 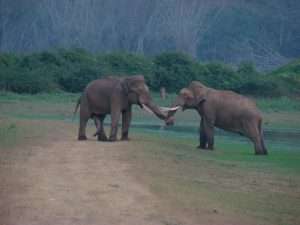 Elephants are a sexually dimorphic species, i.e., there are visible differences between males and females. Males are bigger and bulkier than female elephants and require more food resources. Body size and tusks of large adult males are cues for young males to avoid contesting with them for resources and mates. These factors can restrict herd size in males and motivate young adults to spend more time in mixed-sex groups where females are dominant.

Keerthi added, “Associating with mixed-sex groups could also be a tactic of young adult males to sneak a mating opportunity with females.” In a polygynous species such as elephants, one male mates with many females to enhance his chances of producing offspring. For this reason, there is massive competition among males to secure a mate. “A female elephant has a gestation period of about 22 months followed by a long nursing period. She mates once in four to five years,” said Keerthi, emphasising how this competition is further intensified.

To get in a good session of field work, the duo would wake up early in the misty and chilly mornings at Kabini. “By 6:30 in the morning, we were on the field, only to return after sunset,” said Nandini. Keerthi added, “We would pack our food before leaving. Initially, we would cook dinner after returning, but over time we found other places to eat. That was good because I am not fond of cooking!”

Keerthi and Nandini spent over 1,000 hours recording elephant behaviour. They would make notes of the total time an individual spent alone and with fellow elephants, and various physical gestures they showed towards one another like males sniffing female genitals or aggressively sparring with other males. They focused on one individual at a time and noted the number and identities of the elephants the focal individual associated with. To make useful deductions about male social networks, they used statistical models to meticulously examine the interactions playing out and if these changed with respect to the age and sex of elephants around. 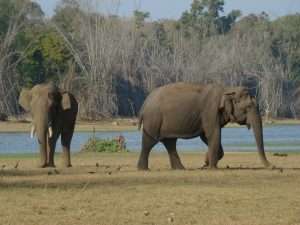 While on the field, they identified every elephant and assigned each of them unique names. Nandini said: “I was the first student in the lab when I began collecting the data as part of the Kabini elephant project that began in 2009. Prof. Vidya and I gave them mythology-inspired names. For instance, we named a big old aged male Bheema.” Keerthi’s choice of names was influenced by the novels she read in her childhood. “My favourite was Gartred, a name I had read in a Daphne du Maurier novel”, Keerthi said.

For female elephants, it was different. “We had first two letters constant for all the names for the females that belonged to the same herd”, said Nandini. Cuts and pigmentation of the ears, injury marks and variation in tusks in males, presence of smaller tusks called tushes in some females, back and tail characteristics, helped them tell elephants apart.

Being women on the field

“Having worked with a diverse set of people on and off the field over the years, I know that for many women in India pursuing a degree is the best way to witness the world, postpone marriage talks and live independently,” said Keerthi. But gathering ecological data is very different from the biological work done in a lab setting. “I have noted that representation of women in ecology and evolution in India is better than in other fields and many women have done pioneering work in animal behaviour. Yet, fieldwork has aspects that are particularly stressful and unsafe for women,” said Keerthi.  She was inspired by books written by Jane Goodall and Dian Fossey, researchers who were trailblazers in ape behavioural ecology. “They made me believe that women do belong in the field”. 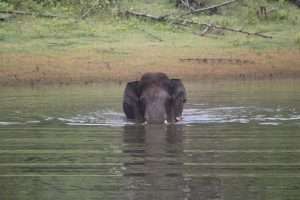 Field biologists work with forest guards and animal trackers, who are invariably men. “Because of the general attitudes and casual and not-so-casual sexism that most women face growing up, having to work in a male-dominated setting is very intimidating,” said Keerthi. She counts herself lucky to have had some supportive figures by her side on the field. “Krishna, an elephant tracker assisted us on the field; he was curious about the work. His enthusiasm for watching and identifying elephants matched ours. He was an excellent colleague and friend through the years!” Still, Keerthi believes there is room for improvement in ensuring that fieldwork is safe for all genders, orientations, castes, classes, etc.

“Being a woman in science gets more difficult with seniority,” she said. “ There were times near the end of my PhD when I was doubtful that I would finish. But support from family and friends, my partner, and of course, elephants pulled me through.”

Elephants pulled me through

Her being on the field has been a source of anxiety for her parents, but Keerthi recalled that they were reassured to know she would be working with a woman investigator. “Prof. Vidya invests in her team emotionally and checks on them. I could talk to her when I was flustered which made a huge difference to me and my productivity,” Keerthi said, and Nandini agreed.

“Studying animal behaviour requires a lot of patience which has trained me to understand the transient nature of difficulties in the field and in personal life,” said Nandini.  She believes that more efforts are required to comprehend motivations that guide animal behaviour. Though Nandini is still fascinated with elephants, she is currently nurturing her other interest—education. Today, she is an educator at Azim Premji Foundation. “I was always inclined towards teaching. After my post-doctoral research, I am now gaining experience in teaching and delighted to work with students.”

Keerthi, meanwhile, is on the hunt for postdoc opportunities: “Applying for postdoc positions makes me anxious sometimes. It is a chaotic and biased process. The best of ideas and hard work might not be enough. Nevertheless, my research ideas will eventually speak for themselves to bring me opportunities…I would love to continue working in the field of animal behaviour”.

Rupsy is a wildlife biologist and a multimedia science communicator who has worked in various landscapes in India addressing different aspects of conservation ecology. She likes to write and illustrate “all things science”.