Shilpa is an observer at the Giant Metrewave Radio Telescope near Pune. Her troubleshooting skills have kept India’s eyes into the universe open for many years. 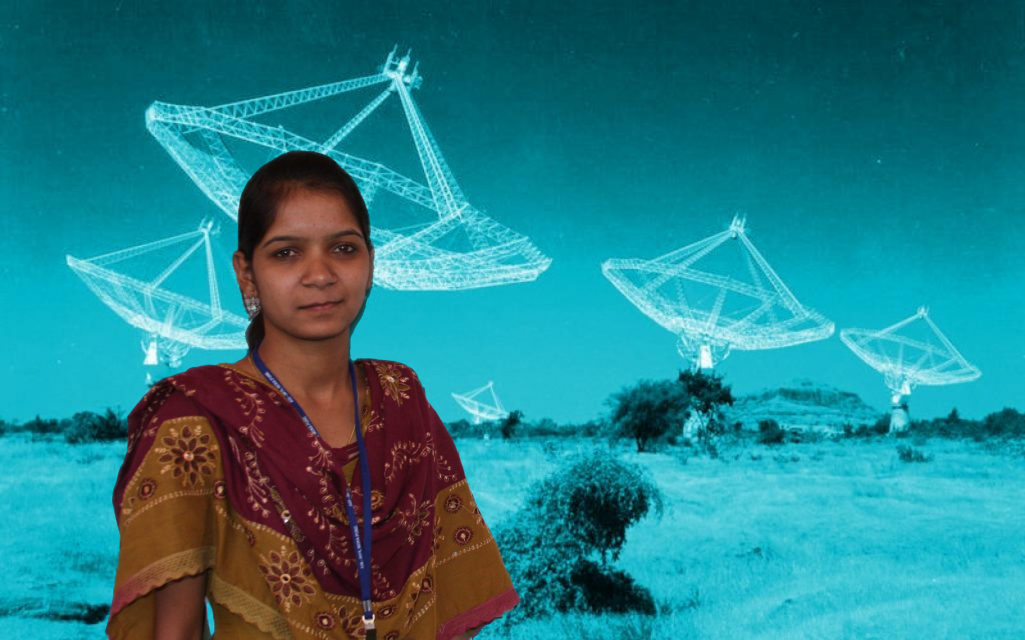 The Giant Metrewave Radio Telescope (GMRT) spreads out its many gargantuan steel arms from the village of Khodad, about 80 km north of Pune, Maharashtra. The telescope observes the sky not with light, but by detecting radio waves, which are the longest waves in the electromagnetic spectrum and invisible to our naked eyes. The GMRT gives astronomers access to the goings-on in distant galaxies, jets of particles moving at speeds close to the speed of light, stars that are invisible in the optical wavelengths, and many other fascinating astronomical objects. Making sure they get the data they need are observers like Shilpa Dubal who spend their days and nights in the control centre keeping these giant eyes into the universe open.

36-year-old Shilpa has worked here since 2008. Managing and troubleshooting this enormous telescope is, no doubt, hectic — even during the course of our interview the official phone lines in her residential quarter kept ringing. Shilpa explained that she needs to be available for consultation even when she is not working her shift. But that doesn’t seem to bother her; she treasures these antennas and what they can find.

During the day, the control centre is abuzz with activity. Each observation requires multiple people to work in tandem, including the academic staff, technical staff, observers and astronomers. Whereas astronomers analyse the data to answer scientific questions, observers make sure the telescope smoothly collects the data the astronomers are interested in, in a time-bound manner. They have to solve any technical problem that may occur along the way. At GMRT, ten observers work across three shifts: morning, afternoon and night. Shilpa is one of the two women among them.

Shilpa got the job right after she completed her undergraduate studies in electronics. She would later pursue a masters’ in electronics from the University of Pune, but this was while working at GMRT. “It was quite challenging as I had to balance coursework and work duties,” she says. For example, it was not possible for her to attend all the classes at the university. “So my colleagues made sure I could schedule my weekly holidays on days I had to attend class. The university was okay with me being irregular, as they knew I was sincere. Moreover, I got access to all the required technical books from the GMRT library,” she added. Like her colleagues and the university, Shilpa’s parents too were supportive throughout.

Shilpa with some of her colleagues at GMRT during a visit by ISRO Chief K. Sivan Credits: Shilpa Dubal

A day with the GMRT giants

Built over 1984 to 1996, astronomers started observations with the GMRT in 2001. It has since proved to be one of the most sensitive radio telescopes in the ‘metre’ wavelengths, and astronomers continue to make exciting discoveries with the help of data they collect with the GMRT. The GMRT has played a role in the discovery of the enigmatic ‘fast radio bursts’, the study of the rate of formation of stars billions of years ago, environments of supernovae explosions, and the discovery of dying galaxies at the edge of the universe.

Shilpa’s work as an observer is crucial to such discoveries. In the control centre, she closely monitors several screens flashing graphs and plots, providing various data points that are collected in real-time. These plots also tell Shilpa if something is wrong with the data, and where exactly the problem may lie. In case of a problem, she must check if the appropriate antennas are working. In case any are misbehaving — rare, but it has happened — Shilpa needs to coordinate with multiple engineers to identify the source of the technical problem. According to her, the key to successful troubleshooting is effective communication, and this is where a swift and easy rapport with individuals in different teams really helps. It may be a software issue, or an electronic one — either way, it’s up to the observer to get the observation back on track. A quick resolution is the only way to prevent the loss of crucial observation time. Time lost could make a scientific analysis of the astrophysical sources difficult, or in some cases, impossible.

In the rare case when there is a problem that multiple teams cannot diagnose, Shilpa is left with no choice but to halt the observation. In June 2020, Cyclone Nisarga wreaked havoc in Maharashtra, causing the GMRT team to park observations for three days; the extreme weather events that caused extensive damage in the area disrupted GMRT observations for another four days. For astronomy, that is precious time lost. Shilpa and her team had to reschedule the observations, depending on the particulars of the astrophysical source of interest. They consulted the scientists involved in scheduled observation and members of the GMRT Time Allocation Committee (GTAC) to come up with careful solutions. This was tricky. “If a particular issue requires the physical presence of any of the staff members who reside in NCRA, Pune, then rescheduling the particular observation that was temporarily switched off can also get delayed,” says Shilpa.

While the observation is taking place, Shilpa’s job is to monitor the health of the data being collected. Sometimes, she may have to shift between different wavelengths within the GMRT’s waveband; at other times, the target may have moved across the sky and she may need to reorient the antennas.

The activity at the control centre quietens down in the night shift. The control centre transforms into a deserted place occupied only by the security officials and a team member monitoring the temperature of the electronic systems. Sometimes, it’s just Shilpa and her desktop. There are residential facilities at the control centre which are occupied by technical staff members but they are not on duty at night. The GMRT residential colony, where Shilpa’s quarters are, is at Narayangaon, the nearest town about 15km away.

Observers have their hands full

During the nationwide lockdown in 2020, the GMRT members set up special computers in the housing colony and connected them to the control centre. The observers then continued their work by accessing diagnostic data collected in the control room via these computers. To maintain physical distancing, a maximum of two people could be present at any time in the hall. “The move went smoothly. Now we can log in from anywhere, and we have got intercoms at our house. However, it restricted other facilities we enjoy, like the canteen,” says Shilpa. At times, the technical issues in GMRT’s electronic system that hold up the observations demand diagnosis by technical teams. During the lockdown, this became impossible. Shilpa handled several problems that had emerged and managed to diagnose the issues precisely in conversations with multiple technical team members over the phone. Life became quite hectic in the lockdown, she admitted.

Although some of the staff members live with their families, Shilpa felt isolated. “I could not visit my family in Pune for three months,” she said.

In 2017, the GMRT underwent technical upgrades. The upgrades increased the frequency range that the telescope could observe and increased its sensitivity by about three times, Shilpa explained. The observers have had to adapt to the changes quickly. With increased automation, the failure in different systems, for example, the power systems can create automatic alarms, making it easier to locate potential problems in the whole network. But not all the systems are automated yet. 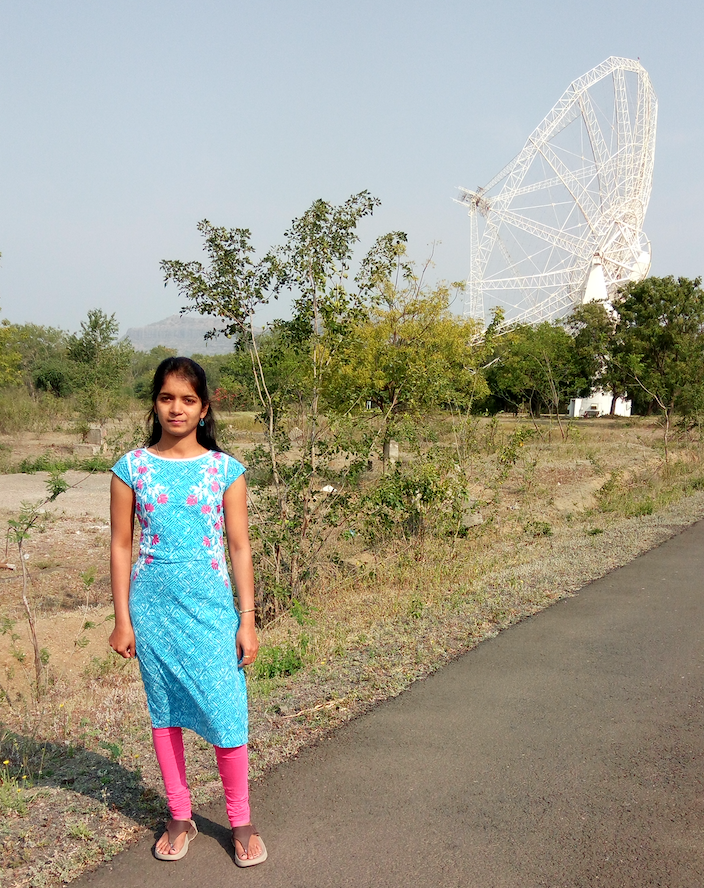 Shilpa in front of a GMRT Credit: Nutan Deshmukh and Manisha Samble

Senior observers like Shilpa have added responsibilities, but the pandemic has made her even busier. Earlier, astronomers would directly access all the astronomical data immediately after observations, especially those that require large storage space. However, with the limitations imposed by the pandemic, that is not possible anymore. Hence, it is the observers who are now expected to keep a safe copy of all GMRT data so that the astronomers can access them at a later time. Shilpa has to actively monitor the total amount of storage space in GMRT’s servers and make space for newer data, as well as be in constant touch with astronomers after the observations are over.

Besides her traditional observer duties, Shilpa has also conducted a scientific project for GMRT, along with two of her colleagues. They observed a set of 45 standard astronomical sources called calibrators which are used by radio astronomers to understand how the telescope behaves while observing different parts of the sky.  The knowledge of properties of calibrators with respect to the particular telescope helps astronomers correct instrumental factors that may affect observations of other astronomical sources. Shilpa presented her study in the Metre Wavelength Sky, an international conference held in NCRA, in 2013.

Of course, it is tremendously challenging to regularly execute scientific projects alongside observation and maintenance schedules at the control centre. Yet, Shilpa aspires to do her PhD in the future; she can do this with approval from NCRA. “It will be difficult to manage. Initially, we are required to follow astrophysics coursework, which is new to us because we are from a technology background,” she said.

দেবদত্ত পাল। [he/him/his] An eternal student of science. Writes for the world, writes for himself. Bogged by nightmares — still dares to dream of better times. Living in Climate Emergency, just like everybody else.