A technical officer in charge of a hydra facility tells us about what it’s like to work with these amazing aquatic creatures and how she dealt with the nationwide lockdown. 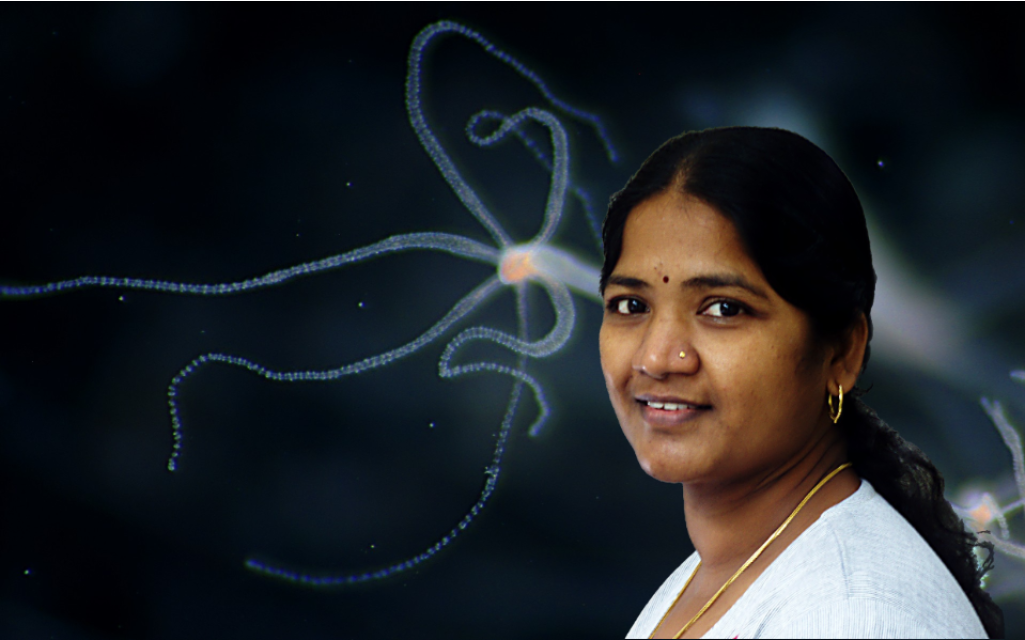 Rohini’s heart raced as she packed her bag with vials of tiny tentacled animals, a pack of brine shrimp eggs, bottles of the special water solution, glass bowls and pipettes. After all, it is not often that one has to carry laboratory material home. The Covid-19 pandemic was at its peak, and the entire country was in lockdown. The hydrae that Rohini had diligently maintained for fourteen years would most definitely die if she did not act quickly. Fortunately, she was able to create a safe environment for them to live in at her home. Developmental biologists around the country would be grateful to Rohini for this gutsy act.

As a technical officer at the Agharkar Research Institute (ARI) in Pune, one of Rohini Londhe’s major responsibilities is to grow and maintain hydrae. Hydrae are simple freshwater animals, few millimetres in length, known for their regenerative ability. These tiny cousins of jellyfish can, and do, live forever. Researchers who study cell regeneration, development and growth in animals use hydra as an experimental model. If the hydra samples at ARI had died due to lack of care during the lockdown, it would have taken almost a year to replenish new research-worthy experimental subjects. The movement restrictions posed by the pandemic meant that sourcing samples from other places were uncertain. That’s why Rohini, with support from her supervisor Surendra Ghaskadbi, decided to take the hydra samples home!

Her daring escapade ensured that the researchers could continue their research as soon as the lockdown was relaxed. She literally saved the day(s)!

Rohini grew up in a joint family of farmers in the town of Indapur near Pune. She had no plans to pursue science when she was in school一her siblings and cousins chose to study commerce, a discipline that they thought would help them handle farming and associated jobs. Things changed when she was 14. “The turning point came when my father met with an accident. He had to get multiple surgeries done and was hospitalised for almost a year. I was in charge of caring for him. In this difficult and formative time, we decided that I will aim to be a doctor,” Rohini told us. As it turned out, a medical seat was inaccessible to her, and she took up a BSc in zoology instead.

In 2002, Rohini moved into a hostel at the Savitribai Phule Pune University (SPPU) to pursue an MSc in developmental biology. Transitioning from a small town to a big city was challenging for Rohini, as she came from humbler realities. Homesickness aside, she was also struck by food poisoning in the withdrawal from home-cooked foods. The bigger challenge, however, was the English language. She was one among a few students at SPPU from small towns who were not as fluent in English as the course demanded. It took a while to get used to the pace of teaching. “But my mentor at SPPU, Saroj Ghaskadbi, and other teachers at the university was very helpful. They used to spend time with us even after teaching hours to ensure that none of us missed out on the learning,” Rohini says. Later, thanks to the many seminars and presentations at ARI, she got comfortable communicating in English.

After the Masters, Rohini worked as a junior research fellow at SPPU for a year, and then in 2005, she got an offer to join ARI as a scientific assistant. She accepted the offer immediately as it gave her financial stability and a chance to work on something interesting.

Initially, Rohini looked after chick embryos and hydrae, two popular animal models that researchers use to study developmental biology. Working with chick embryos became challenging during bird flu breakouts due to difficulty in getting uninfected samples. Hydra emerged as more favourable; it helps that getting access to these animals does not require any ethical committee clearances. So Surendra Ghaskadbi, who led ARI’s Animal Sciences division, found it prudent to have a permanent staff assigned to care for hydra and assigned that task to Rohini.

Hydrae have a very simple body structure. They have a foot, a long double-walled, tubular body, and a single opening called a mouth with long slender tentacles surrounding it. Hydra can grow into a whole animal from any cut portion of their body, provided the cut portion has a few cells of each of its cell types intact.

When food is plenty, hydrae reproduce asexually. A small bud emerges on the hydra body, grows and detaches to form a new hydra. They can also reproduce sexually. Ovaries and testes are formed, and they release eggs and male gametes, which combine to form fertilised eggs—the eggs hatch whenever food conditions are more suitable.

Rohini currently maintains two strains of hydra at ARI. They are light brown pond hydra belonging to the species Hydra vulgaris. Both the types originated from samples collected by her supervisor. Surendra Ghaskadbi collected the first from a lake in Savitribai Phule Pune University in the year 2000 (the Ind-Pune strain), and the other from the Naukuchiatal (NK) lake in Uttarakhand in 2012 (the Ind-NK or high-altitude hydra strain).

Despite belonging to the same species, the two strains have some genetic differences. Before being used for research, these genetic differences and other characteristics needed to be studied and recorded. Rohini did this for the Ind-NK strain. She was also able to describe the evolutionary origin of this strain.

Once the strain was clearly characterised, Rohini had to ensure that the sample stays uncontaminated, i.e., no other strains of hydra mix with it. The hydrae must be maintained under fully known conditions. To do good science with these animals, the medium they live in i.e. the water must have a standard composition of dissolved substances. Funguses easily infect hydrae, so Rohini has to make sure the medium is periodically cleaned. What her hydrae eat is also one of her primary concerns.

“If hydrae die or are lost, samples can easily be collected from nearby ponds and lakes. But after that, you have to grow an entire population from a single animal. It takes time to grow the animals and classify and identify them based on physical and molecular structure. Usually, the analysis process takes three to four months, but given that I have other responsibilities at the institute, it could take up to a year,” Rohini says.

Rohini is fascinated and protective about her hydra in equal measure. “It is exciting to see the buds grow and then detach from the parent one day. During sexual reproduction, the initial stages can develop as fast as within 48 hours. I come to the lab very early in the morning at times, just to check on the progress of growing embryos!” she remarks.

The pandemic and its challenges

When India suddenly locked down completely in March 2020, Rohini was one of the few who had special permission to visit ARI and monitor her animals. However, with the police and the local government pressuring people to avoid stepping out of the house, she could only manage to visit only once or twice a week. Even these visits had to be short. It made feeding and cleaning after the hydra, an activity that would take at least four hours, nearly impossible.

By April, Rohini knew that the only way to save her hydrae was to take them home. And that is what she did. This meant that she was committing to being close to her samples all day, keeping the hydrae alive and healthy in the non-ideal conditions of her home. It was never going to be easy. It was the peak of summer, and the hydrae were accustomed to the 18℃ laboratory conditions. “I used to keep them in front of a cooler running at full blast,” she says.

After the lockdown was relaxed in May 2020, the hydrae had to get re-acclimatised to the lab conditions. It was nothing else than Rohini’s deftness and experience that ensured that tiny organisms survived the tos-and-fros of the pandemic. When we spoke in July 2021, Rohini happily declared that the two hydra strains are doing well now.

Getting back to routine

Rohini has resumed her laboratory duties as the institute gets back into its research routine after the first and the second waves of the COVID-19 pandemic. Besides her hydrae, she also helps researchers in confocal imaging, another area of her expertise. She is a member of the team from ARI that does Covid testing for government testing facilities in and around Pune.

Rohini’s time at ARI is spent in a mix of administrative and research tasks. She is in charge of all the instruments in Surendra Ghaskadbi’s developmental biology lab – which studies how cells behave in developing embryos and how genes contribute to overall development. She is also often seen assisting and monitoring the researchers and students using the hi-tech instruments.

Rohini’s facility makes hydra samples available to any researcher in India who wants them. In 2018 she helped develop a nominally priced hydra kit, which includes hydra samples, food, and the medium for the hydrae to grow. Rohini periodically conducts workshops and demonstrations for students to learn how to take care of hydra.

Somehow, Rohini manages to do all of the above without a permanent assistant. Occasionally, students pitch in when she is on leave, but this is not often. If hydrae need to be only maintained and not grown, they need to be fed once every two days. If they need to be grown, it is essential to feed them every day. “I rarely take long holidays. I know that the hydra can survive for a week without food, but I would like someone to be making sure all is well with them,” she says.

When she is at home, Rohini likes to spend her time with the family. But what she enjoys best apart from research is spending time at her farm in Indapur. “Even if I get a two-day holiday, I like to go to my hometown with my husband and two daughters and work on the farm or spend time doing farming-related activities,” she tells us.  She wants her girls to know both the worlds, the academic as well as the farm life. She believes that it is important they connect to nature.

After our interview, Rohini kindly offered to show me what hydra looked like using the macro lens of my camera. “Looking at them while feeding is so exciting!” she said, and I wholeheartedly agreed.

Arati Halbe is passionate about science and believes that knowledge should be accessible to all. She is an electronics engineer by education and has been working as a science communicator for the past five years.