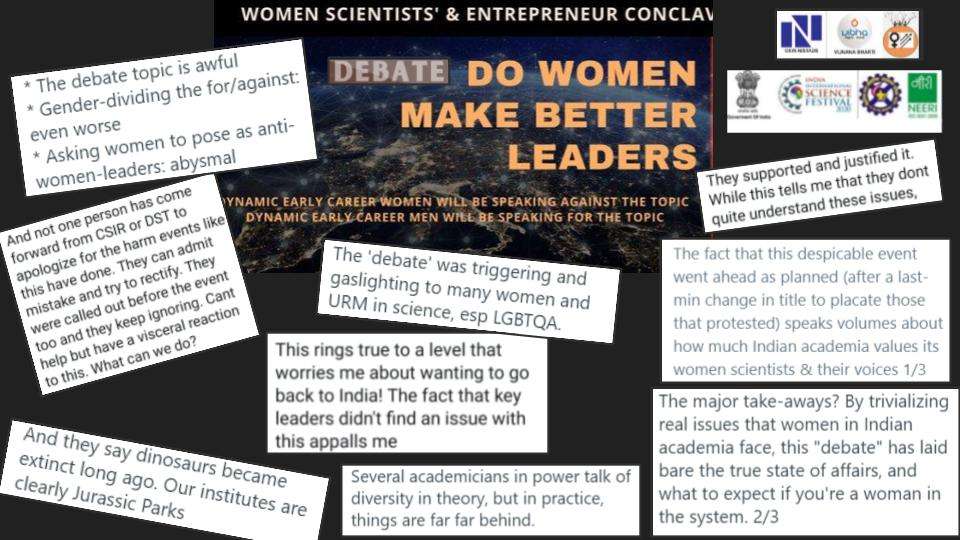 On December 20, a poster took me and other stakeholders in Indian science by surprise. It was for a debate entitled ‘Do women make better leaders?’, slated for December 24. It was being organised by the Department of Science and Technology (DST), the National Environmental Engineering Research Institute (NEERI), the National Institute of Science, Technology and Development Studies and Vijnana Bharati, among others, as part of the India International Science Festival 2020.

With paediatrician and motivational speaker Ushy Mohan Das as the moderator, the poster proclaimed that early-career women would be speaking against the topic and early-career men, for.

Fortunately, various observers, including the BiasWatchIndia and The Life of Science collectives (the author is affiliated with the latter), expressed their opposition to this misogynistic event in which young women had to contest their own leadership potential. However, Council of Scientific and Industrial Research (CSIR) director-general Shekhar Mande publicly defended the event.

Shortly after, the event’s organisers changed the topic, which now read, ‘How to promote women leadership in scientific institutions? Systemic changes are necessary’. But on the day of the event itself, December 24, the audience was shocked to see that only the name had been changed; the debate was still on the same issue.

As it happens, important members of CSIR institutions were also present in the audience, including NEERI director Rakesh Kumar as well as Mande.

This article focuses on the moderator Das’s talk at the end of the debate. While the debate’s premise was dodgy, what Das said directly delegitimised the event itself.

Among other things, Das spoke about how merit should be the key determinant of someone’s success – irrespective of their gender – and how discrimination lives more in people’s minds than in society. She also referred to queer-trans people as “LGBTQ-ABCD whatever”.

These claims are false and discriminatory, in my opinion, and harm the cause of inclusivity in Indian science, for which many of us have been fighting for a long time.

“No one can make you feel inferior without your consent”

The statements above seem to indicate that discrimination exists only as a construct in the mind of the discriminated, not as a social reality. It is almost unimaginable to think anyone would delegitimise discrimination as a reality that many of us have to face – given that it’s already well-established that Indian science, and science across the world really, is quite averse to women, queer-trans, Dalit, Bahujan, Adivasi (DBA), disabled and other marginalised people.

The idea of consent that Das introduces is more appalling. In indicating that one can only feel discriminated if and when they consent to it, she indicates that a person is responsible for the discrimination they face. This shifting of the blame from the oppressor to the oppressed reflects the archaic portions of Indian society itself, much like how rape victims are blamed for sexual crimes committed against them and shamed as ‘sluts’. Das’ words were also reminiscent of how often young marginalised people, who have had to quit science academia, have been told that their exit was their fault, not that of the system.

As it happens, Das didn’t mention any ways forward for the oppressor in Indian science – the savarna, cisgender, heterosexual, able-bodied man. Instead, her action points were all targeted at the oppressed. She spoke about the need for the oppressed to assert and believe in themselves (while also reminding us of the arbitrary “thin line” between assertion and aggression), but not for the need for savarna, cis-heterosexual, able-bodied men in Indian science to make way for women and people from other marginalised identities.

If we really want a more inclusive environment in the sciences, where people from different identities can coexist, it’s imperative that the more privileged bunch acknowledges the systemic and systematic biases that plague the sciences. The privileged and those already in power also need to take proactive measures to further the cause of fair representation and inclusivity in the sciences. The onus of this can’t be on the marginalised – and this kind of victim-blaming, gaslighting and shaming isn’t acceptable in any case.

Das’ words were also reminiscent of how often young marginalised people, who have had to quit science academia, have been told that their exit was their fault, not that of the system.

On the topic of success in science, Das spoke about what enables a person to succeed: “If you enable a person a free and fair environment, both men and women can grow, and merit will be manure, merit will be the fertiliser … nothing else which people claim as a reason to be successful, and I look forward to a world which is equal to everybody. I believe in hard work, merit, and effort, in you going above the ladder as you keep going along.”

Now, it’s worth repeating that merit is a poor, unfair, arbitrary and casteist measure of ability. When savarnas talk about merit, they mean they have a ‘natural’ propensity to be better at what they are doing. Merit is often invoked vis-à-vis higher education, where savarnas pose it as a (false) neutral marker of how someone deserves to be doing something. It’s no accident that ‘merit’ fits very well into the carefully crafted notions of science’s objectivity and neutrality.

However, society is not based in a neutral setting – and neither is science. Science is done and controlled by scientists who have their own social loci, power positions and biases. Innumerable communities have been systematically deprived of education over generations. And it’s unfair to expect that people who are first-generation scientists in their families will be able to compete with third- or fourth-generation scientists for the same position. Only a lopsided imagination resulting from generations of privilege could assume any real measure of ability from this idea of merit.

In fact, supporting merit on a public platform supported and sponsored by the CSIR and DST shows what Indian academia has been trying to achieve for a long time: an agraharam of savarnas running Indian science. This is the only thing that merit can act as a manure and fertiliser for.

Das’ view is also reflected in Indian science’s anti-reservation lobbies – among people who believe reservations for DBA and other marginalised people ‘dilute’ the ‘merit’ and efficiency of science. But their real fear is rooted in the upper-caste anxiety of savarnas losing their generational stronghold over educational spaces.

I strongly feel that such propositions, based on a superficial understanding of merit, should be discouraged – especially at a time when reservations in universities and institutes across the country are under attack.

In fact, supporting merit on a public platform supported and sponsored by the CSIR and DST shows what Indian academia has been trying to achieve for a long time: an agraharam of savarnas running Indian science. This is the only thing that merit can act as a manure and fertiliser for.

The curious case of “ABCD whatever”

The most triggering moment for me in this triggerball of a debate came to be when Das referred to queer-trans people as “LGBTQ ABCD whatever”. She said, “When  people start trusting each other, men or women, or any of the other genders – LGBTQ, ABCD whatever it is – the world becomes a superb place to stay” (emphasis added). I’m not sure if this is a poor sense of humour, but to me, as a queer-trans person in science, her words provide a glimpse of the cruel reality of everyday living in science.

It’s true that as a queer-trans person, being in science is a lonely experience. Most people around are not queer or trans, and are often ignorant about issues of queer-trans people. However, this sort of proud demonstration of the disregard and ignorance that science as a discipline harbours for queer-trans people is, I argue, harmful to the cause of inclusivity in the sciences and to the entire act of science itself.

The ‘L’, ‘G’ and ‘B’ in LGBTQ+ are not gender identities; they are sexual orientations. Das’ comment is thus already at risk of being ignorant and queerphobic. But the proud “ABCD, whatever it is” also puts something more harmful on display: how privileged, cis-heterosexual people don’t care about queer-trans sensibilities. As a queer-trans person attending the debate, I was triggered by such a reference and my mental health has been affected by it.

Moreover, the fact that all this happened in the presence of the CSIR director-general, the CSIR-NEERI director and senior academicians – and that nobody raised any objections – indicates that science as a whole is queer- and transphobic in this country.

Das’ way of referring to queer-trans people is derogatory to our identities and screams that Indian science doesn’t care about us – and is thus harmful to the discipline of science itself. Broadcasting such messages will discourage young queer-trans people from entering science, thus taking away many new possibilities and perspectives they could have brought to the discipline.

In addition, the silence in the face of such inappropriate comments only condones the abuse and harassment of queer-trans people already working in science. If the people in power themselves don’t care about making science a safe space for queer-trans people, we become disabled to confront our bullies, abusers and harassers in academic institutions.

Two recent Supreme Court judgments, NALSA v. Union of India (2014) and Navtej Singh Johar v. Union of India (2018), recognise the historical injustice that has been meted out to queer-trans people. So it is sad, discouraging and, more importantly, enraging to see scientists from important institutions stay silent – instead of speaking up.

Broadcasting such messages will discourage young queer-trans people from entering science, thus taking away many new possibilities and perspectives they could have brought to the discipline.

Who takes responsibility? Where are the answers?

A few questions still remain. Who will take responsibility for the harm this debate has caused to the cause of inclusivity and representation in the sciences? Who will take responsibility for the DBA and queer-trans people whose mental health has been affected by the casteism and queer-transphobia put on public display by Das in a government-sponsored debate? Do the DST and CSIR recognise this to be a mistake? What corrective measures are they going to take?

I’m still looking for answers, although I don’t expect any. I can only hope that as more people join the dissenting voices, there will be fewer such incidents in future. I also hope people in power will take responsibility for their actions and start where they should – with an unconditional apology, followed by critical engagement with their own actions.

A community is built on trust and collaboration. I’m not sure if I trust the science intelligentsia in our country any more.

Note: This piece was first published on The Wire Science and has been republished here with permission from The Wire Science team. Featured image is adapted from the publicity poster of the event under discussion as well as tweets discussing the issue.