With the threats of climate change, waste disposal and a housing crisis facing us, it has never been more crucial to adopt more sustainable ways of living. We talk to a scientist & a practitioner who see natural building as a way forward. 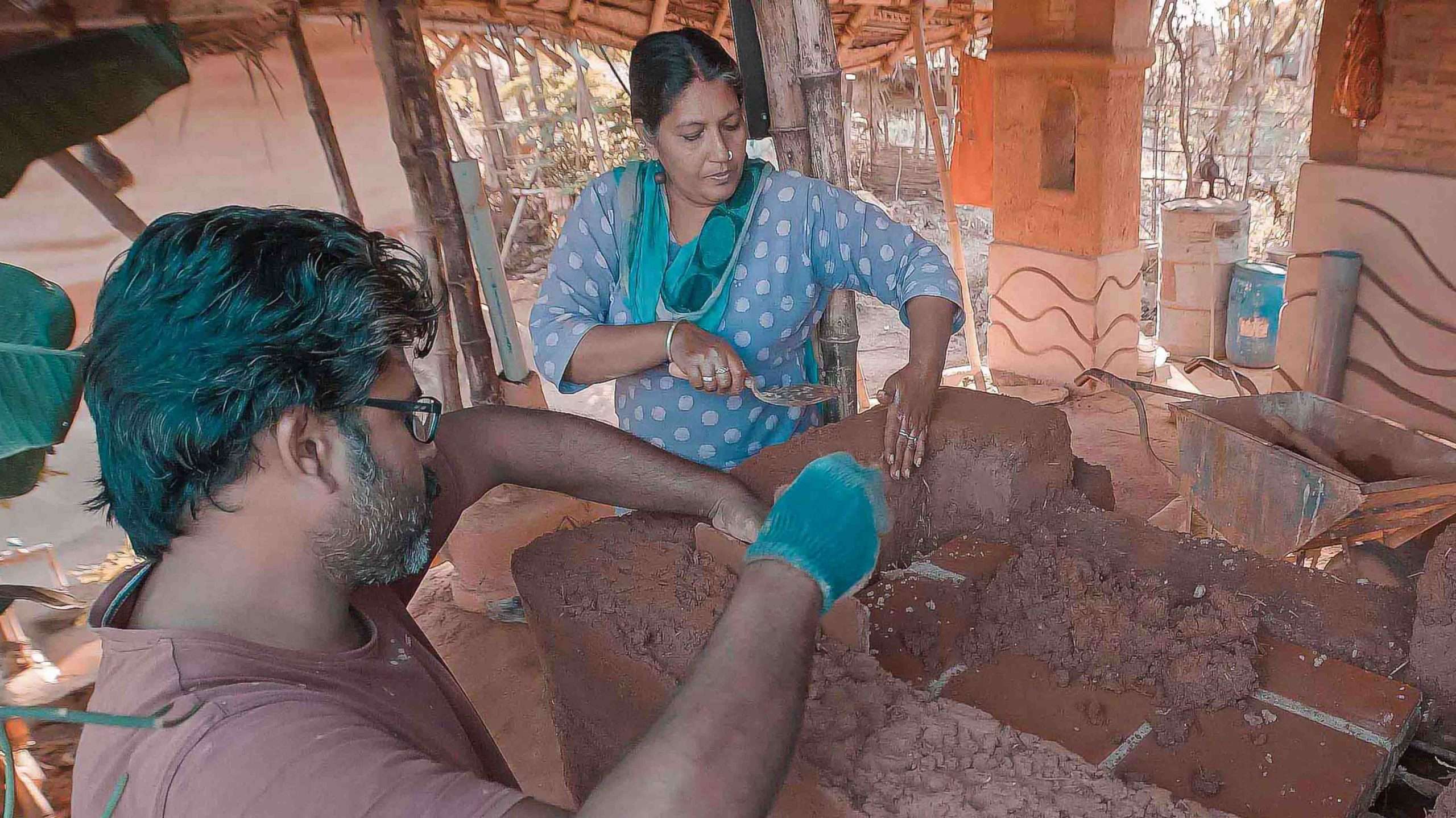 The building sector has recorded a new high: it now accounts for 38% of all CO2 emissions, according to a newly released report by the United Nations Environment Programme (UNEP). Cement manufacturing alone accounts for around 8% of the global CO2 emissions and consumes 2-3% of the global energy supply. “We urgently need to address carbon emissions from buildings and construction,” said Nigel Topping, United Kingdom High-Level Climate Champion, in a press release from the UNEP. He added that our future depends on if we are able to challenge the incumbency of steel and concrete.

Being the second-largest producer, cement and concrete has come to be very easily available in India, though prices are rising. It has come to be the preferred material for all kinds of construction. No longer are natural building materials such as mud desired for housing.

But as the odds stack up against cement, a comeback for natural building is on the horizon. Several scientists and natural building practitioners in India are demonstrating the benefits of mud and other traditional materials as construction material. Besides its eco-friendliness, mud is known to keep the indoors cool, the walls breathing, and is much more economical, studies are showing. Besides, mud may also help address the contemporary housing shortage.

A recent survey conducted by scientists from India and the Netherlands noted that it is not so much a matter of quality, as it was a matter of “societal image”, that is a key barrier towards the acceptance of mud as building material. The survey exposed how deeply the Indian government policy links poverty with a ‘kutcha’ house as opposed to a ‘pucca’ or cement built house. It also emphasised the role of NGOs in promoting construction using local materials and providing consultancy for safe construction with earth.

Sindhu Bhaskar is part of one such organisation.

Thiruvannamalai-based Thannal Mud Homes Trust is a natural building awareness group founded by Sindhu and her architect husband Biju Bhaskar in 2011. After years of workshops, interactions with traditional masons and artisans, and building projects that included their own ‘earthbag’ home built entirely with natural materials, Sindhu and her team are now working along with scientists to discover and document the scientific basis of their mud success stories.

Though Sindhu is deeply involved in all of Thannal’s activities, she is most known among the community to be a virtuoso with plasters. Plasters can be thought of as the skin of the building. They are the key to protecting the structure from harsh environmental conditions like heat and moisture. Additionally, they add aesthetic value to mud buildings – this is significant considering the role of ‘image’ in the popular resistance to mud homes.

After years worth of trial-and-error, Sindhu and her team have successfully developed and refined five different recipes for plasters. These use different proportions of mud, lime and other natural materials such as cow dung, egg whites, aloe vera and fibres. They are collaborating with scientists to conduct tests on them. “We give them the proportions and they do the mixing and testing. Sometimes we train their workers on how to apply the plaster properly. The results are looking good.” 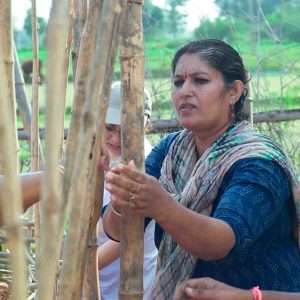 Growing up in Payyannur, Kerala, Sindhu developed a knack for design and handiwork very early in her life from her father, who was a tailor. In her new avatar as a natural builder, she has been able to translate this passion into a remarkable ability to play with and control the hues of the natural plasters she develops. “Plaster preparation is like cooking. Things can go very wrong with the increase or decrease of any ingredient. To get the colour you want is difficult, but when you succeed, it is a feeling that is hard to describe.”

Before Thannal, Sindhu was a homemaker in Kochi. Though her husband Biju worked in a conventional architecture company, they always felt somewhat out of place in the big city. “Both of us always liked smaller houses, thatched roofs – how it was in my village.

The couple have now established themselves as experts in natural building. Every year they get innumerable requests to take up building projects, however, the team is not tempted by these offers. “Being a teaching group, we take up only one or two projects a year, and only if they are unique in a way we feel strongly about,” said Sindhu. Two recent projects Thannal took up were that of a seed bank in Karur, and a home for a farmer in a remote spot in Attappady, Kerala. “The farmer was a normal person, had very little land and there was no approach road or anything. It would be hard to reach materials there, but we heard a depth, a sincerity in their voice and that’s why we took it up.” The home of Jayan, the farmer, is almost complete.

At Thannal, Sindhu and her team are challenging the dominance of cement by documenting how a fully natural home is possible and practical – and according to her, anyone can do it.

Among all their projects, Thannal’s strongest argument in favour of mud homes is the one that they built for themselves. Since 2016, Sindhu, Biju and their two sons have been living in a home they designed and built themselves using only natural materials obtained locally. Jute sacks were packed with mud to build the structure, a technique known as earthbag building.

Sindhu stressed that their work is based on ideas that are age old. For example, cow dung has been used since ancient times as an insecticide and a waterproofing agent; similarly, cashew nut shell extract has been used as termite-proof for wooden door frames and is known as an excellent antioxidant. She is skeptical about mixing mud with cement.

The mind of the original architects

The thoughtless addition of cement to natural buildings is an especially sore point with Thirumalini Selvaraj, a civil engineer at VIT University, well known for her work in restoring heritage structures. She illustrated this with the example of lime, which is a common ingredient in many heritage buildings. “What happens is this: lime is a low-strength material compared to cement, but has high durability. If you take a lime building and replace it with cement, it is incompatible. Cracks will appear.”

When restoring old buildings, Thirumalini has one mantra – know the properties of the materials and the technologies that were used to build it. This is where her specialty lies – in identifying materials used, finding its properties and understanding how it was processed. Based on this information, she looks for locally available materials that are most suited to restore the original structure. “Respect the original architect,” she stresses.

Thirumalini has worked on restoration projects of several famous monuments including Charminar in Hyderabad, Vadakkumnathan Temple in Thrissur and the Padmanabhapuram Palace in Kanyakumari. “With each project I do, there are many surprises. The information we get from studying these structures gives solutions for modern problems,” she said.

One solution that Thirumalini repeatedly encounters in her job is lime. Lime is derived from limestone or calcium carbonate. After burning and slaking, it takes the form of calcium hydroxide. This form of lime has been used as a binder in construction for thousands of years around the world. Limestone mining has its share of environmental impacts, but it is still considered a better alternative to cement by experts in natural building. Besides being an effective, breathable and healthy building material, it is – theoretically – recyclable. Within the structure, lime hardens with time as it sets back to limestone. And during this process, it performs the ecological service of absorbing carbon di-oxide from the atmosphere. 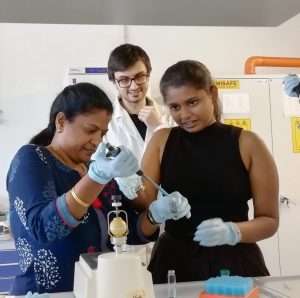 Thirumalini wanted to be a civil engineer for as long as she could remember. “My father worked in a government press but he had a passion for construction. When I was two or three, I would accompany him early in the morning to collect bricks so he could build small houses for relatives,” she recollected. “I thought building houses was the greatest profession in the world.”

Her desire to specialise in ancient architecture evolved more gradually, and she quickly realised that it wasn’t going to be easy. “Civil engineers were not studying heritage structures in those days. There was hardly any literature, and I would write to lots of foreign people working in the line. Many professors I approached to guide me declined as they themselves had no knowledge in the area.” But Thirumalini persevered and eventually secured herself mentors who agreed to support her through her mission.

Thirumalini’s faith in lime was reaffirmed recently while she worked on the restoration project of an 18th century haveli in Udaipur, Rajasthan. “We found that the lime mortars used were [still] in great condition, equivalent to modern concrete. The fibres and natural extracts [the original builders had] added to it was preventing tensile cracks and carbon capture was happening, too,” she said.

For the haveli project, Thirumalini faced the daunting challenge of deciphering the cocktail of natural extracts used to strengthen the limecrete (similar to concrete, but with lime instead of cement). “We needed a lot of data in order to accomplish this. Being from south India, I had to visit Rajasthan, monitor the monument, find the sthapatis (temple architects) and interview them extensively,” she said. The rest of the job relied on her expertise in various scientific techniques such as scanning electron microscopy, x-ray fluorescence, x-ray diffraction and Fourier-transform infrared spectroscopy. Eventually, she was able to determine which fermented plant extracts and hemp fibers were used by the original builders of the monument. Further trials in her laboratory helped her figure out the amounts and combinations. Only then could they prepare a compatible substitute material to fix the damages on the structure.

It’s not just for heritage buildings that Thirumalini sees value in natural building materials. “People think that cement is good because it is stronger. This strength may be needed for high-rise buildings but not for low-rise ones,” she says. She notes that while there is a growing interest in heritage buildings among architects today, civil engineers have yet to catch up. “All of us, architects, archaeologists and civil engineers, need to come together to convince people,” she says, signing off.

Update (February 25, 2021): This feature has undergone edits to remove the contributions of one of the sources on their request.

Note: This article is a part of season 5 of TheLifeofScience.com, which is supported by a grant from the DBT/Wellcome Trust India Alliance. All images have been sourced from the sources cited in this report. A previous version of this article has been published in Mongabay India.