Not every scientist had a breezy start to their careers, and these stories of struggle are just as important for us to hear as the stories of success. A story told through tweets... 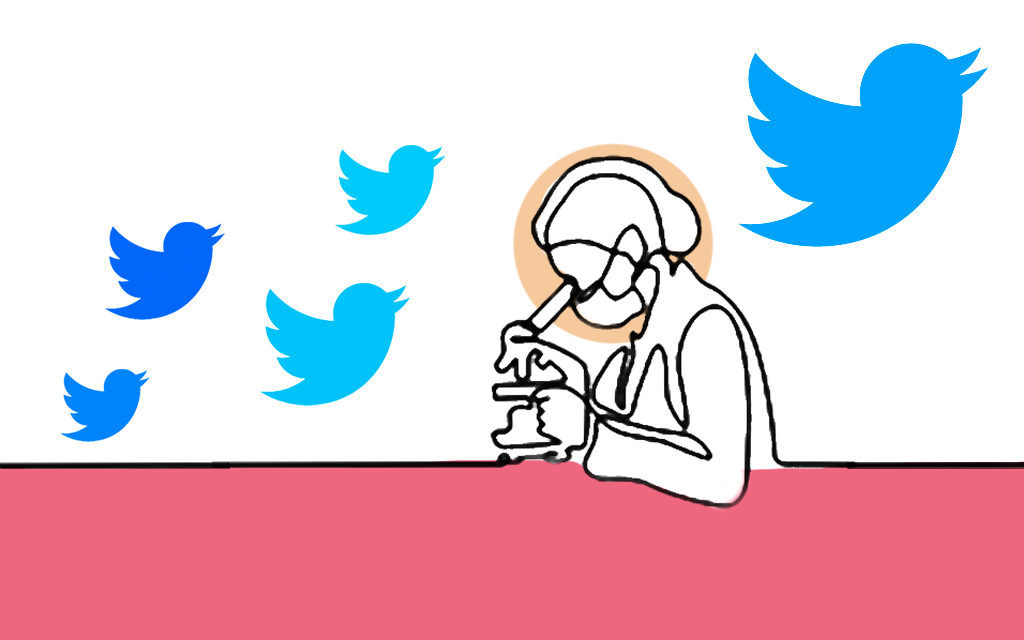 Even before I started my PhD, a faculty member told me, “Only 10% of PhD students go on to become scientists.” The context: this particular faculty did not think I would become one. I chose to not dwell on it too much because, well, I had time to prove them wrong, or even right. Now in the last lap of my PhD, faculty and other senior researchers often ask me about my future plans. The predominant advice conveyed to us is this: if you don’t manage to get a position at an Institute of Eminence, it’s best to take up a non-academic career.

How justified is this advice? Of course, for someone as trained to work with high-end instruments as many PhD graduates are, there is a need for specially-equipped and well-funded labs. Yet, I dare to think of alternative endings. Having heard the stories of many established Indian scientists firsthand, I have seen that where they are today is often not where they started.

I decided to mine for such stories on Twitter. 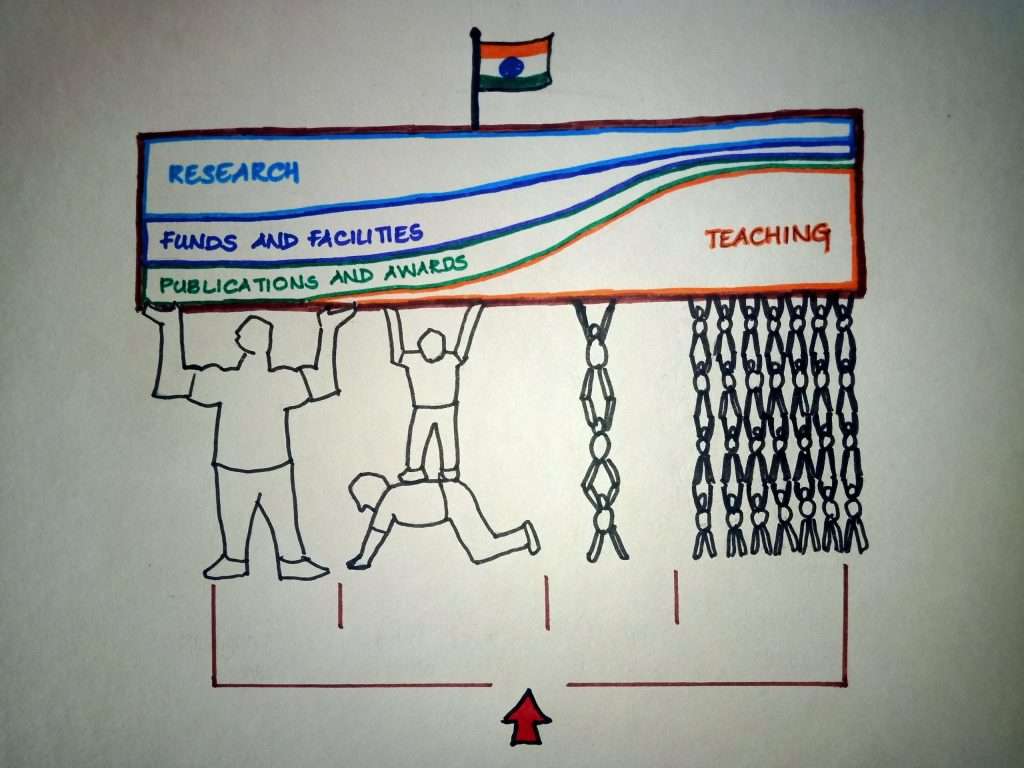 While national labs focus on research, universities focus more on teaching and training of next-gen scientists. Illustration by Samatha Mathew.

It began with my tweet on September 27th, a Sunday.

When faculty give advice, sometimes they speak from their current positions. This sets unachievable expectations for a beginner. Instead we need to hear more about their beginnings. I don’t think all faculty started working at state-of-the-art facilities with lots of funding 🙂

Totally agree. Struggles, challenges, lesson learnt and strategies employed to overcome in spite of all odds is what we need to hear. This helps PhD Scholars, Postdocs and early career investigators to define their own path.

Truly agree. We need to discuss more about the failures we faced or how we initiated things when we were stuck. In short we need also roads to success seminars in conjunction with the research ones.

Soon my PhD supervisor at CSIR- IGIB Sridhar Sivasubbu ignited interest in the thread by sharing the story of how our lab looked one and half decades ago.

We had one set of pipette between 4 students, reagents rationed and had to go to an internet cafe to check emails (in 1990s). Lessons learned: plan, plan & plan before doing anything.

IIT Kanpur’s Amitabha Bandyopadhyay joined in with a fairly detailed peek into his PhD journey. He talked about making bold decisions, the gumption to follow scientific instincts, and the importance of a right mentor who will pull you back when you are about to fall off a cliff.

I did my PhD in the lab of an outstanding scientist – Prof. Umadas Maitra. He only worked with graduate students – all Bongs, almost exclusively from Biochemistry Dept. Of Calcutta University. He felt comfortable with these students. https://t.co/sW2jCEnqO0

The next day, I woke up to a pleasant surprise: Gagandeep Kang, the first woman Fellow of Royal Society (FRS) from the country, and holder of other illustrious titles, who is working in India, had added her own story of humble beginnings.

Good point, Samatha. 20 years and 3 months ago, I came back from a post doc at the best rotavirus lab in the world, to find that in 2 years away everything I had before was gone, except my technician, Sheela Roy. A fungoid half lab & 1 old fridge was the sum total of resources!

Needless to say, the thread got much traction then on. Few more responses, from Surendra Ghaskadbi who retired from Agharkar Research Institute, Pune, Vidita Vaidya from TIFR, Mumbai and Amit Kumar Yadav from THSTI, Faridabad, highlighted the initial and ongoing struggles of Indian researchers.

I had a great mentor, project but poorly equipped lab, not even microphotography & inconsistent funding. Used lab facilities in and outside Pune. Begged, borrowed chemicals. As PI, had to build the lab slowly but collaborated extensively. Troubleshooting during PhD came handy.

We started and still are in a barracks style hut that leaks every monsoon and this is a saga of moving buckets. Then we discovered Mumbai’s magic blue tarpaulin. So our hut has a blue tarpaulin sheet over it. My two-bit advise – retain your sense of humour.

I didn’t hv a functional laptop/desktop for ~8 months. Used my 6y old laptop that shut down ~10 times a day while browsing. Then, got a workstation shared with my student. Being computational biologist, it was like not even having a pipette. Following year, got the stuff needed

It was Tapasya Srivastava from Delhi University who first raised a crucial point which I was hoping someone would bring up: Indian research is not a single, uniform entity.

Anyone who doesn’t have a huge funding such as that from welcome trust and others always starts on a different level and this extends to the rest of the career. Invariably those of us who continued to work in India never got the opportunity to set up big labs anyway. 🙂

What I could really appreciate from her points is this: while the universities train next-generation scientists, they don’t receive many funds for research. Plus, the teaching (the major agenda at Indian universities) that a lot of graduates end up doing, is not taken into account while evaluating for research grants. While this is definitely something Indian funding agencies should consider, it also explains why newcomer faculty compete neck-to-neck for a position at national labs or central universities.

Soon after, Hansika Chhabra, a science communicator, brought up the most pinching aspect: worrying about research output is itself a privilege among scientists. Many smaller universities — where a lot of trained scientists work — are still working to build basic infrastructure.

Met a new faculty at a small uni in TN (not sure) in Jan. She said her biggest first challenge was to get women’s toilet constructed.
Forget prioritising classes, applying for funding for research, or starting a research project. The lack of regulations can lead to such inequity.

The entire scenario of a beginner independent researcher in India was summed up neatly by Aishvarya Venkat, a Scientist from CSIR-IMMT:

If working with a senior faculty, then I hope setting up lab shd be relatively easy. But if starting with smaller grants n w/o a senior support (shared infra), better to network early n collaborate. IMO, beginners struggle for sct/faculty now will be quite different frm senior’s.

Vinita Gowda from IISER Bhopal countered the original tweet with some practical advice for students who might be disheartened.

Instead I’d say learn to read between the lines. Everyone, including students need to know how much to take when a faculty/PI is preaching! ‘Cause come-on! Also, dont compare research and outcomes & think the metrics used by anyone will be fair. It is meant to be, but it isn’t.

THIS is not easy – that I can vouch for! Ultimately – good and smart work shines, not awards, not grant money etc.. so scientific backgrounds cannot be compared, the personal motivations and inspirations can… so ask for that and just listen to that bit.

This discussion also reminded me of a very pertinent point brought up by the Principal Scientific Adviser to the Govt. of India during a Science Policy Forum meeting for young researchers, which I had live-tweeted.

He urged PhDs and postdocs to consider spreading out, rather than applying for faculty positions at the same handful of top institutes. He also added that a network between central labs and universities will be very useful for young researchers across the country.

PhDs/ Post docs have to be more adventurous and choose jobs other than at well known national labs.

More synergistic Science to be done where smaller universities are in a network with other labs/ institutions.

Of course, reality is not so rosy. If the funding is skewed, and therefore the publications and awards directly reflect that, universities will always stay undesirable for wannabe scientists. To raise the bar of training at our universities, we should be encouraging PhD candidates to look beyond top-tier institutes to take up independent research as faculty and provide the universities necessary support.

As for a young PhD like me, my hope is that I can do useful work after years of research training and not give up on research. My apprehensions come from the fact that opportunities in the country are limited and behind the above ‘success and struggle’ stories, there are a lot more from those ahead of me on the career path that is discouraging. Meanwhile, I keep seeking out diverse stories and receiving advice to decide the best possibilities ahead.

Author bio: Samatha is a PhD student in Biological Sciences at CSIR- Institute of Genomics and Integrative Biology.

Samatha is a PhD student in Biological Sciences at CSIR- Institute of Genomics and Integrative Biology.