An undergraduate student grapples with copious evidence that her passion and determination to do science may not be enough to make it in the tough, inequitable space of academia. 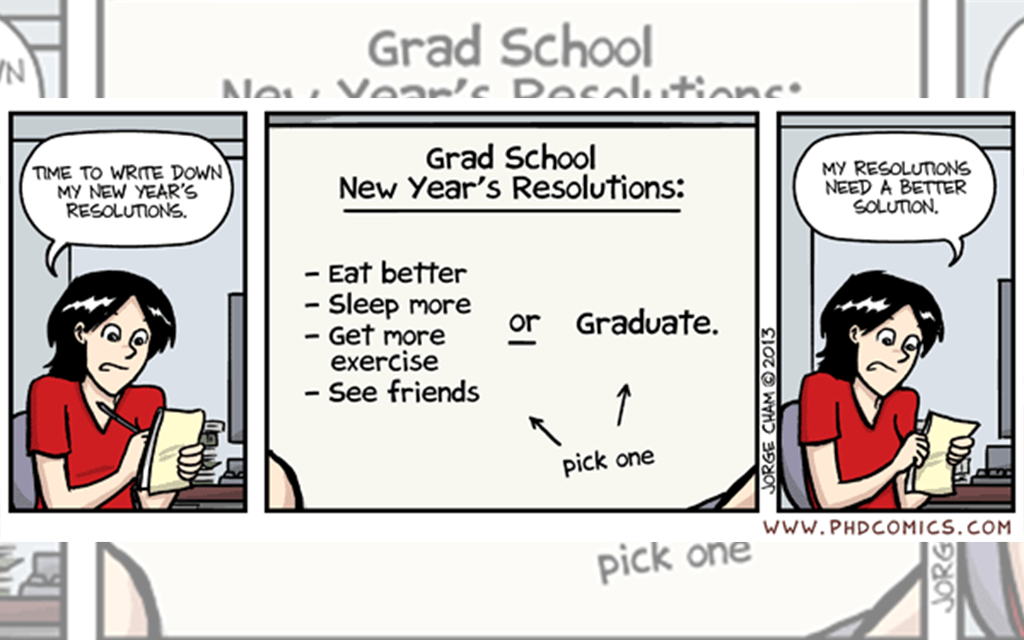 As an undergraduate student of zoology at the brink of entering academia, I often find myself questioning my choice of career—a field whe+re the success rate is phenomenally low, work hours insane and pay dismal. But then again, nothing brings me more joy than coming across scientific literature with titles like ‘Fantastic Species and where to find them’ or listening to ethologist and evolutionary biologist Richard Dawkins metaphorically talk about DNA flowing through time in his book River Out of Eden. My earliest memory of science is, perhaps, that of my grandfather –  a palaeobotanist, reading excerpts from the book  The Blind Watchmaker (also by Dawkins), as if it were a bedtime story. Back then, I understood little to none but almost twenty years later, the now tattered and yellowed copy of the book sits on my bookshelf.

So what then brings me and countless students like me to rethink science as a career?

The movie adaptation of the popular Piled Higher and Deeper (PhD) comics , by Jorge Cham, follows the lives of several graduate students. It reminds us that “Science is for the surprises, and not the prizes”. But when the success of scholarship is measured by the number of publications, impact factors and funding generated, is it really about the surprises?

A science graduate student is like Sisyphus, the absurd Greek hero; Sisyphus was eternally condemned to repeat the task of pushing a boulder up a hill, only to see it roll back – similarly, graduate students go about their day in the lab doing long, seemingly meaningless hours of work; experiments are conducted till coffee runs dry and they return the next day only to repeat and replicate results. Occasionally, there is a glimmer of hope when one arrives at promising results, only to have their dissertation rejected by the supervisor, yet again.

In his speech  “Science as a Vocation” at Munich University in 1918, German sociologist, Max Weber said:

‘One must ask every young scholar: Do you in all conscience believe that you can stand seeing mediocrity after mediocrity, year after year, climb beyond you, without becoming embittered and without coming to grief?  Naturally, one always receives the answer: ‘Of course, I live only for my “calling.” Yet, I have found that only a few could endure this situation without coming to grief.’

The low pay grade doesn’t help either. Graduate students carry the burden of Sisyphus’s boulder – otherwise known as college debt – while continually being exploited for their skilled labour in labs, internships and assistant jobs. As a summer trainee at a research institute in Delhi, I worked for nearly eight hours a day, six days a week, for two months. From designing primers to running PCRs for as long as ten hours, I did it all. At the end of it, I received a stipend barely covering a month’s travel expense.

If you are not a cis-man, prospects of a successful career in STEM are even lower. One must consider the XY bias, which talks about how womxn are perceived to be lesser capable of doing science as compared with their cis-men colleagues. “We know there are strong unconscious biases equating science to males. They’re just there in the air,” writes Dr. Sarah L. Eddy, a behavioural ecologist working towards a more gender-inclusive biology curriculum.

I remember looking at Rosalind Franklin’s Photo 51, while our high school biology teacher traced the history of our current understanding of DNA’s molecular structure. I asked what I thought must be crossing every student’s mind. Why didn’t Franklin share the Nobel Prize with Watson, Crick and Wilkins when their very research was built on the foundation of what she had discovered so brilliantly? Her answer was not satisfactory to my incipient feminist perspective, neither was my fellow classmates’ indifference. 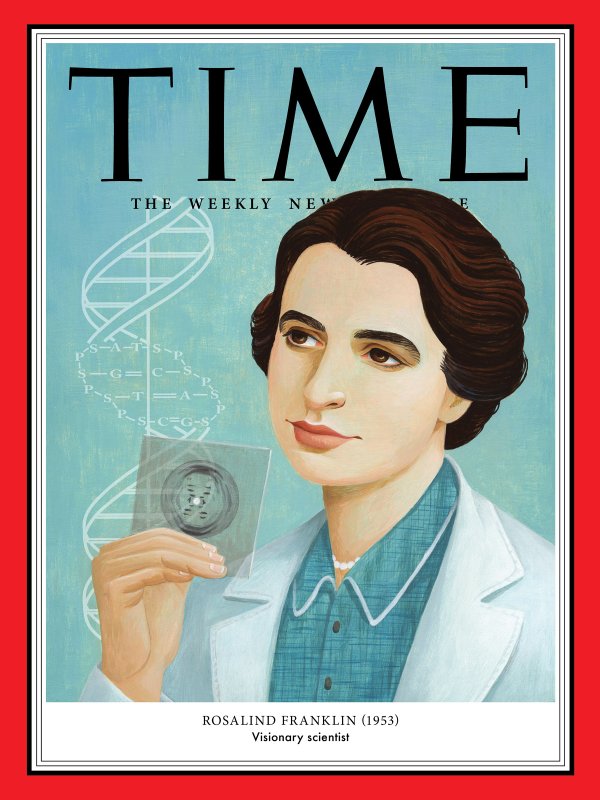 A portrait of Rosalind Franklin holding the famous Photo 51 on the cover of TIME magazine when she was recognized as one of the 100 most influential women of the last century. Illustration by Jody Hewgill.

So I took to reading The Double Helix, by none other than the ‘Father of DNA’: James Watson. He once infamously said:

“ I suspect that in the beginning Maurice [Wilkins] hoped that Rosy would calm down. Yet mere inspection suggested that she would not easily bend. By choice she did not emphasize her feminine qualities. Though her features were strong, she was not unattractive and might have been quite stunning had she taken even a mild interest in clothes. This she did not. There was never lipstick to contrast with her straight black hair, while at the age of thirty-one her dresses showed all the imagination of English bluestocking adolescents. So it was quite easy to imagine her the product of an unsatisfied mother who unduly stressed the desirability of professional careers that it could save bright girls from marriages to dull men.”

It can be very disheartening for a young student to read what the supposed ‘heroes’ think of their women counterparts in the lab, holding them guilty of being too uptight, hysterical, unfeminine, demanding of acknowledgement—it seems all personal traits are analysed and critiqued, but scientific temperament and intellect. Among the four Mertonian norms of scientific ethos is universalism, i.e. the impersonal and indifferent character of science. Can science, then, be of impersonal nature if the scientific institution is not?

Be it in mathematics or biology, women always face the glass ceiling at one point or another. The regressive notion of inherent male intellectual superiority and dominance perpetuated by biological essentialism still pervades in scientific dialogue. As of 2019, there have been 53 women Nobel Laureates while a staggering 866 men; the ratio tilts further when we speak solely of STEM fields.

Can science, then, be of impersonal nature if the scientific institution is not?

So how do I justify to myself my love for science? I do succeed with a little help from my friends, one of them being my innate scientific attitude (something I know I share with many of my gender)? But I would like to hear more voices of women of science; to be able to relate and share in their experiences. When the game changing biotechnological tool of CRISPR emerged from the labs of two women scientists—Jennifer Doudna and Emmanuelle Charpentier—I saw it as a beacon of hope for myself, a gradual shift in the scale of gender imbalance. Here, on TheLifeofScience.com itself, when I read about the contributions of innumerable women scientists, it amazes me everytime… how we learn about science in such great depths, but so little about the people behind the theory, especially when these people are womxn.

Why do I love science then and am I willing to take on its cons, I still hear you asking. I pondered over this while watching The PhD Movie, and one of the characters asked the other if he’d rather do something else. And I asked myself the same—would I find the comfort I do in the universality of science and reason elsewhere? It’s oddly magical how a bacterium is wildly distinct from say, a chimpanzee, which again bears no resemblance to a dolphin or an oak tree, but every life form makes sense in light of evolution. The whys, the hows, the whats—can all be explained in the context of science, and if not, it’s in the process of being understood. Every vocation comes with its own baggage of risks and bargains but to find yourself in a field that’s constantly adapting and evolving can be very exciting. And if you can be one of those who change the culture of science, then there’s nothing like it!

Author bio: Chandni is finishing up her undergraduate studies at the University of Delhi, and is on her way to pursuing a Masters’ degree. She interned with TheLifeofScience.com in the month of August 2020 and helped us set up our archives.

Chandni is finishing up her undergraduate studies at the University of Delhi, and is on her way to pursuing a Masters’ degree. She interned with TheLifeofScience.com in the month of August 2020 and helped us set up our archives.