An unconventional detour took Rachana Bhatawdekar from an IT job to leading a research group at the European Space Agency. We catch up with her about her recent discovery that took astronomers worldwide by surprise, and much more.

This June, the astronomy community was caught off-guard by a discovery made using the Hubble Space Telescope. The new observations suggest that the early universe’s first stars and galaxies formed earlier than we’d thought. The team of scientists who made this discovery was led by Rachana Bhatawdekar, an engineer-turned-astronomer originally from Nagpur.

According to commonly accepted theories, the oldest stars are supposed to contain only the lightest elements, hydrogen and helium. These stars, which in astronomy jargon are called the Population III stars, are supposed to be found at the farthest corners of the universe, and are hence the most difficult to probe. Although astronomers routinely observe a variety of stars with sophisticated telescopes, these cosmic oldies have managed to evade them so far. 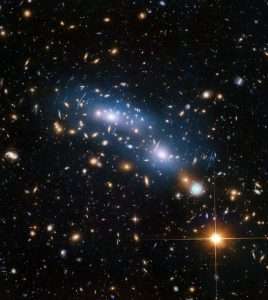 “Finding these stars will reveal the conditions of the early universe, which we know only through computer simulations as of now,” said Rachana, who has been communicating her latest results at back-to-back conferences, even in the midst of the COVID-19 crisis. In spite of all that is going on, and the distance between us (she is based in the Netherlands), Rachana’s friendliness was unmistakable.

Interestingly, probing the edge of the known universe for a living was not part of Rachana’s plan growing up. “Everyone in my family is an engineer,” she told me over email. “Despite being interested in astronomy from my early days, getting into engineering seemed like an obvious choice to me.” So, like thousands of other Indians of her generation, Rachana too graduated from a state university with a degree in electronics and telecommunication engineering.  She went on to get a masters degree in engineering in the US, before embarking upon a career in software in the USA, India and the UK. During her years in the IT industry, Rachana was put off by a ‘masculine culture’, where a notion that men were more capable than other genders was prevalent. “I have seen this in all the countries I worked in,” she said. “However, it was a lot more pronounced in India.” According to her, snide remarks on why womxn should stay at home or cook were common.

It was while working in the UK that her childhood dreams of becoming an astronomer were reawakened. Even after five years in the IT industry, they became so overwhelming that Rachana decided to quit her job. “I didn’t want to have too many what-ifs in my life,” she explained. Without wasting any time, she pursued another Masters degree, this time in astronomy and astrophysics from the University of Manchester, and then enrolled for a Ph.D in the University of Nottingham. This marked the beginning of her fascination for the oldest stars of the universe.

During her years in the IT industry, Rachana was put off by a ‘masculine culture’, where a notion that men were more capable than other genders was prevalent.

The Hubble Space Telescope is one of the most powerful tools humans have created to study the history of the universe. The HST is able to detect distant galaxies, by using to its advantage a phenomenon called gravitational lensing. This is when light from these faraway, low-mass galaxies gets magnified upon encountering massive objects in its path. But even with this, some galaxies are simply too distant, too faint to be detected by the space telescope. Rachana and her PhD advisor Christoper Conselice developed a technique that would allow astronomers to observe such galaxies 10 to 100 times fainter than those already observed. These galaxies are located at distances from the Earth that correspond to a very young (only 500 million-year-old) universe. Remember, the universe is 13.7 billion years old today. Until Rachana and Christopher’s technique, we were only able to probe the masses of galaxies as far as 600 million years.

Rachana pointing to MACS0146, the galaxy she probed for the population-III stars.

With this significant upgrade, Rachana and her team believed they had a shot at obtaining the first evidence for the first generation of stars aka the Population III stars. She closely studied the light emitted by the stars in these 500 million-year-old galaxies and estimated their ‘colour’. “As Population III stars are very hot and massive, they would be much bluer in colour compared to normal stars. So by looking at the colours, we can tell whether the galaxies contain Pop III stars, or if they contain stars that have heavier elements like carbon, oxygen, nitrogen, iron, etc. in them.”

To her amazement, there was still no sign of the Population III stars in the farthest galaxies whose masses are now measurable by us. “This means that the first generation stars must have formed even earlier than 500 million years, earlier even than this incredible instrument Hubble can probe,” said Rachana.

Timeline of the evolution of the universe from its formation till now. The era marked as “Reionization” is the highlight of Rachana’s study, when the first stars of the universe are theorised to have been formed.

Rachana certainly seems to be going places but it’s not been a smooth sail across the cosmos. In astronomy, especially in the field that she works in, the competition is cut-throat. “Criticism is indispensable and also welcome for the advancement of science, but a personal attack isn’t,” she affirmed. “More than anything, it shatters your confidence, and in the worst case, makes you want to quit. You would think that senior people would be more encouraging towards early career researchers like me, but domineering attitudes are common.” She is aware of her peers in other universities who have had to leave the field because of bullying and considers this unfortunate not just for them, but for science itself. 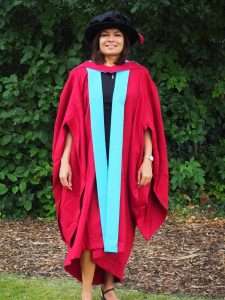 Rachana during her Ph.D. graduation.

There are other factors that make the dropout rate of womxn in astronomy especially high. “One needs to [be able to] travel around the globe for various postdoc positions before applying for a permanent position, and the chances of getting one are quite slim.” Rachana and her husband were fortunate to be together during her PhD. When she received a fellowship with ESA earlier this year, her husband’s organisation offered to transfer him to the Netherlands. “Although we are together now, we are deeply aware of the fact that it doesn’t always work out the same way,” she cautioned.

Looking back, and forth

Rachana has big plans for 2021. This is the year when the James Webb Space Telescope (JWST),  which is more powerful than the HST,  is scheduled to be launched. It will be powerful enough to view the universe when it was just 200 million years old. This is around when the universe must have produced the first stars, according to the commonly accepted expansion model of the Big Bang. “It’s only been six months since I joined the ESA, and right now I’m keenly looking forward to the JWST launch as it would help me extend my work done with the Hubble.”

One needs to [be able to] travel around the globe for various postdoc positions before applying for a permanent position, and the chances of getting one are quite slim.


Rachana is open to moving back to India if a good enough opportunity came her way. While she isn’t thinking about the future at this point, she admitted that Indian science has a lot to gain by creating the space that womxn astronomers like her deserve.

Rachana fondly remembers the letter she had written to astrophysicist and popular science writer Jayant Narlikar when she was 10 years old. “It’s his books that got me hooked to astronomy as a child; he is my idol,” she proclaimed. Many years later, she is happy that her own ground-breaking astronomy work has set a buzz at the Inter-University Centre for Astronomy and Astrophysics (IUCAA), Pune. It is the premier institute set up by her childhood hero himself. Once the pandemic is over, an invitation to IUCAA for a talk on her work is awaiting her.

More about Distance and Time in astronomy

The speed of light is an absolute constant for all observers, postulated Albert Einstein while proposing the Special Theory of Relativity. This implied that the speed of light is the highest possible speed attainable by any object in the universe. This has remarkable consequences. To give you an idea, consider the following:

The distance between the Sun and Earth is such that it takes light about 8 minutes to traverse it. This means, when you look at the Sun, you are looking at how it was 8 minutes back.

The same goes for things around us. The speed of light is remarkably large by ordinary standards, however. For example, light from the chair nearest to you is delayed by nanoseconds, and our brains think there is no delay at all.

Distance is equivalent to time in astronomy. The speed of light plays the role of the constant in equating the two. Thus, distance is measured in years – light years. The time it would take light to travel that distance.

দেবদত্ত পাল। [he/him/his] An eternal student of science. Writes for the world, writes for himself. Bogged by nightmares — still dares to dream of better times. Living in Climate Emergency, just like everybody else.

Thats a fairy tale for anyone. Hats of to the Girl. You make us all Proud.

Superb article. Good to know about your journey & contribution, Rachna. Wishing you all the best.

Thanks for reading it, Pankaj!

Loved reading about you and your work, Rachana. 🙂

It is certainly inspirational. All good wishes to you for endeavours ahead.

Awesome Rachana!! Many Congratulations to you, Saurabh too for the support 👏😊

Superb Rachana….you really deserve a applause 👏👏.
Your journey is very encouraging dear…. Proud of you….!! All the very best for your all future endeavours…!!

Proud of you Rachana !! Being your childhood friend I know how really tough was your journey but always knew that your hardwork and determination will some day definitely bring your dream to reality!! Hats off to you & your parents who have always done everything they can to help you pursue your dream since young age!! and also to your better half ,Saurabh ,who continued to support your dream. Hearty congratulations dear!

Great going Rachana!!
Wonderful to hear about you after so many years after we left Koradi colony.
Heart congratulations.

Thanks everyone for your kind words!

Dear Rachana………Proud of your efforts and glad that you pointed out the most unwarranted tendencies of Male dominance even in the field of basic Science.Let us keep bravely stating this so at least the younger ones learn to change their attitude.All the best and waiting for listening to you in Person at IUCCA,Pune.Looking forward to Welcome you home in Pune……Dr..Suhas Kolhekar(Virologist and Health Rights activist)