A facility manager by day and an artist by night, Deepti Trivedi has over the years become a critical part of the research community at BLiSC, Bengaluru. 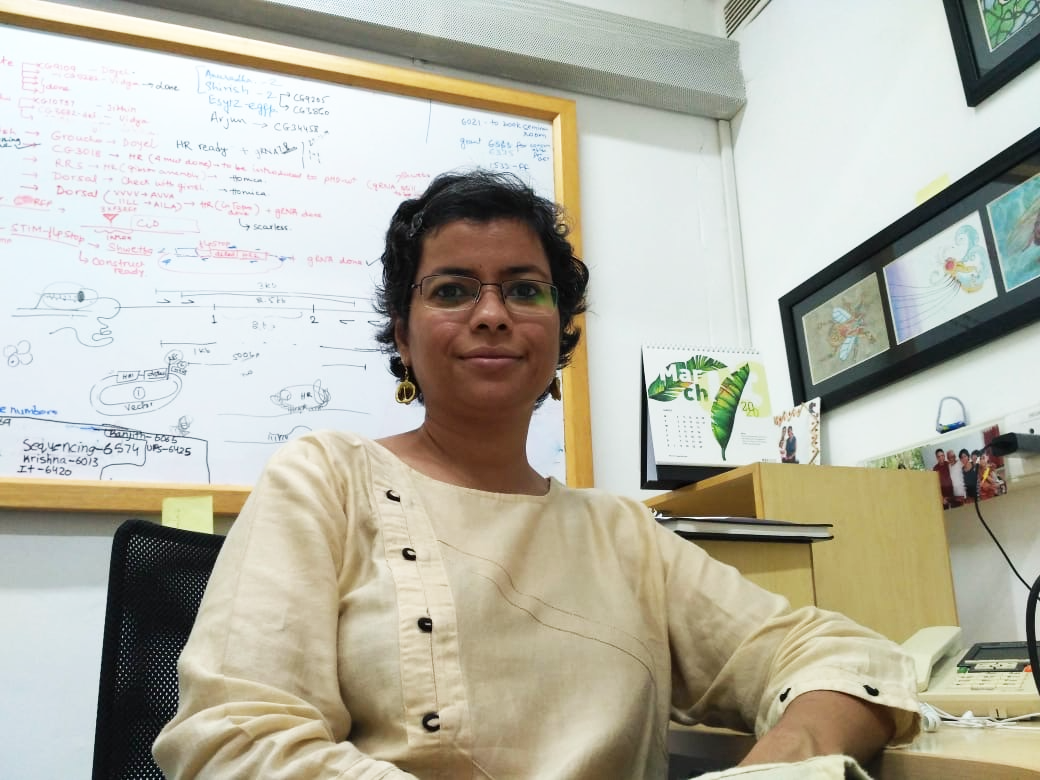 Deepti Trivedi’s office leaves no doubt in one’s mind that she works with fruit flies. Hand-drawn pictures of fruit flies adorn the walls, the tables and the noticeboards. An artist by night, Deepti manages the Fly Facility at the Bangalore Life Sciences Cluster (BLiSC) during the day. Fruit flies, known to researchers as Drosophila melanogaster, are used widely in research. Although they look nothing like humans, they share nearly all the fundamental life processes, making them a good system for understanding different aspects of biology. They are also very easy to handle and come equipped with a vast array of genetic tools, like a system that allows scientists to activate genes at will, or even change their eye colours. At BLiSC, many labs use these tiny flies to study processes ranging from flight control to stem cell biology. The Fly Facility currently maintains seven thousand stocks of different types of fruit flies, and also ‘makes’ new mutants or transgenic flies for the scientists working at the institute. Deepti oversees this facility, which serves as a resource for scientists outside of BLiSC as well. 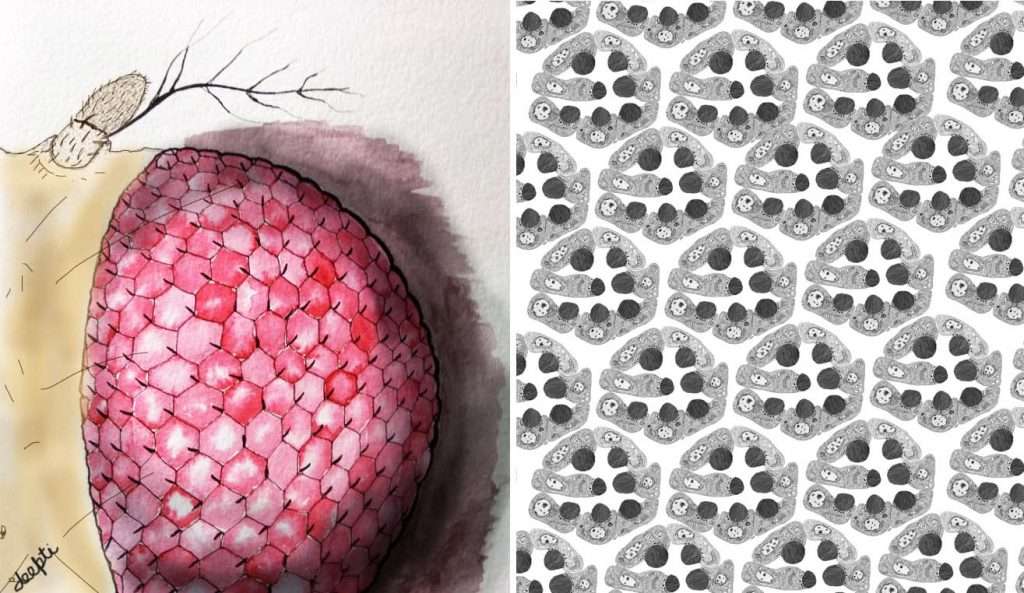 Deepti’s painting of the fruit fly head, and a sketch of their eyes as seen under an electron microscope. Source: Deepti Trivedi

From flies to mice, and back to flies

Deepti’s scientific roots lie both in fly biology and the National Centre for Biological Sciences (NCBS). She started her research career in 1999 as an M.Sc student in the lab of the late Obaid Siddiqi, the founder-director of NCBS, which was set up in 1991. With Siddiqi, she was the first researcher to set up a system to record electrical signals from parts of the fruit fly brain responsible for processing odours. Obaid is considered a pioneer in Indian biology who brought fruit fly research to Indian science, placing Deepti among the few Indian researchers at the time who successfully connected with fruit fly brains.

Upon finishing her M.Sc., she retained her NCBS connection when she joined the lab of Raghu Padinjat in the UK, who had himself graduated with a doctoral degree from NCBS. After three years of working towards her Ph.D. with fruit flies at Cambridge, she crossed the Atlantic to start a postdoctoral fellowship at UCLA in the US. This transition also marked the beginning of her departure from fundamental research.

After her Ph.D., Deepti was already certain that a traditional academic career was not the best for her. “I was fairly certain. I was looking for labs doing translational work, after which I could hope to join an industry, so I needed something different,” she said. She finally joined the lab of David William at UCLA, whose team conducted research on vision in mice using techniques like gene therapy. A stark departure from her seven-year background in fruit flies, for Deepti this was a stepping stone to a new career direction. Here she set up an assay for imaging the movements of visual proteins in live cells, again something that nobody else in the lab had done before. Once her project was over and she had published her work, Deepti decided to move back to India.

In 2013, Deepti’s job hunt once again traced a path to NCBS. Her old advisor, Raghu, had also returned to India to start his own lab at NCBS. CRISPR, a new method in molecular biology, had just arrived at the scene and promised to be the best method to make mutations in genes with a very high specificity. This was a huge leg-up on traditional methods that are more cumbersome and time-consuming, with lower success rates. BLiSC needed someone to come in and make this technique — originally developed in mammalian cells —  work in fruit flies.

Deepti leaped at the opportunity and, after a successful interview, took on the post of technology scientist at NCBS in the latter half of 2013.

(Editors’ note: Some parts of this section have been changed post-publication due to requests from Deepti Trivedi)

“I joined not as a facility-in-charge, but as a technology scientist for developing CRISPR as a technique in a facility with zero knowledge about CRISPR. Within a year, I was being asked to make it serviceable. That put me in immense pressure.” – Deepti Trivedi

CRISPR stands for Clustered Regularly Interspaced Short Palindromic Repeats and is actually part of a bacterial defense system. When a bacterium is first infected by a virus, it saves snippets of the viral DNA, kind of like catching a snapshot of a home invader on your CCTV camera. The next time the virus invades, the bacterium quickly matches it with the saved DNA and unleashes a molecular scissor called Cas9. Cas9 uses the saved snippets to sniff out the virus and cut its DNA into pieces, rendering it ineffective.

When scientists discovered this system, they quickly realised that the specificity of Cas9 would allow them to modify only certain bits of DNA, without worrying about unintentional changes at other locations. To edit DNA using CRISPR, researchers simply tag Cas9 with a synthetic “guide RNA”, which acts like the saved viral DNA snippets. Cas9 lets the guide RNA to lead it to the target sequence in the cell, where it promptly cuts the DNA. By tinkering with Cas9, scientists can use it to remove or add DNA, mutating cells or even whole organisms. 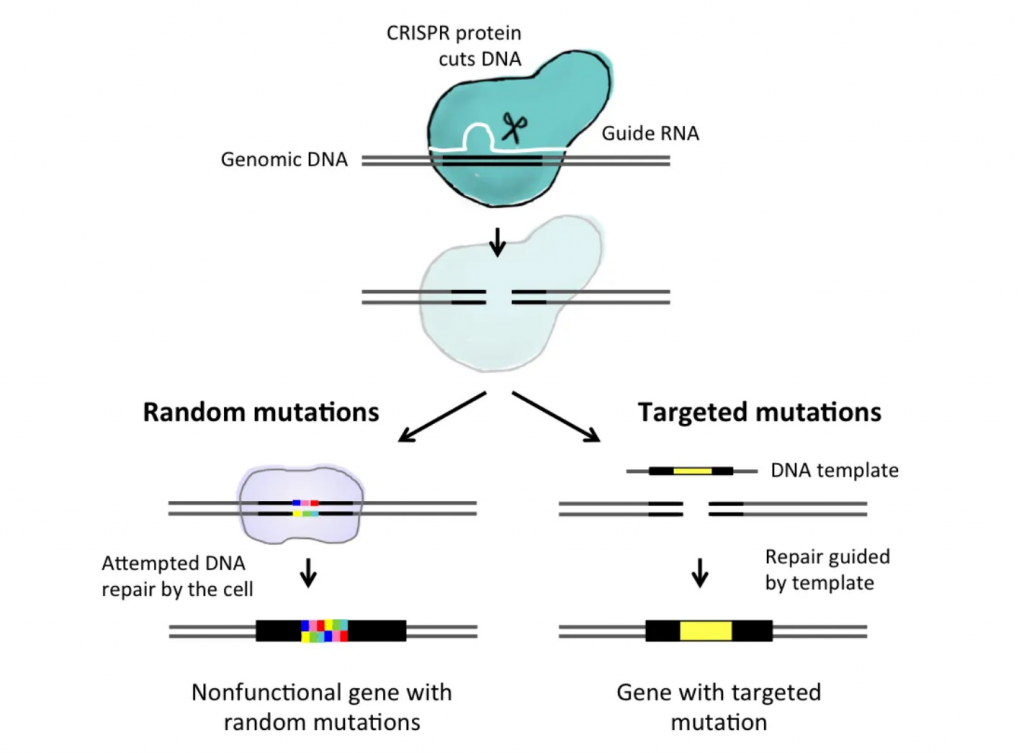 CRISPR is a method of creating targeted mutations in an animal using a guide RNA and a bacteria-derived protein called Cas9. Source: Angela She and Shannon McArdel, SITNBoston

Deepti says that the initial days were perhaps the most challenging since CRISPR was still in its infancy and nobody else at the institute was working on it; but apparently, everyone else in the world was. “Everything that we were trying was new to us; new to everybody actually. And the first few months just went in acquiring reagents and trying to make flies with the desired genotypes, and the problem I was facing was that CRISPR was spreading like… you know, the coronavirus!” she said. 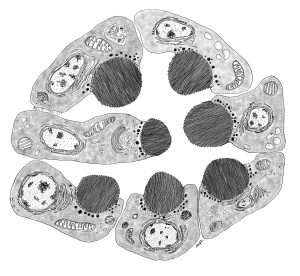 Deepti’s sketch of a fly rhabdomere. Each compound eye of a fruit fly has many of these rhabdomeres. Source: Deepti Trivedi

In those first months, Deepti worked tirelessly to make different types of fruit fly mutants, like those carrying  Cas9  or guide RNAs, only to find out at the final stages that somebody else had already made them and published the results. “It was going so fast! There are so many things that I made, which were actually not used. We used somebody else’s [flies] because, by the time we got ours made, there was something already published, tested and validated,” she explained. She spent months trying to generate mutants using CRISPR, failing more often than not. Referring to her first five successful mutants, she said, “Those five still remain to be the most difficult ones so far. I did not have any beginner’s luck or anything of that sort. All of them were difficult.”

This was a frustrating and stressful time for Deepti, not only because of the pace at which global efforts on CRISPR were moving, but also because there was pressure from C-CAMP, the technology development unit associated with NCBS, to offer CRISPR in fruit flies as a chargeable service. “I joined not as a facility-in-charge, but as a technology scientist for developing CRISPR as a technique in a facility with zero knowledge about CRISPR. Within a year, I was being asked to make it serviceable. That put me in immense pressure.” she said.

After two years of struggle and a lot of support from her mentor Raghu, Deepti pushed through and became adept at editing genes with CRISPR, like a seasoned seamstress cutting and joining different materials. True to her record of setting up new techniques, she established the CRISPR-mediated genome-engineering arm of the NCBS Fly Facility, which is now offered as a standard service to scientists at BLiSC and other institutes.

Eventually, Deepti moved up the ladder to become the manager of the Fly Facility. Aside from setting up the genome-engineering unit, Deepti has worked to improve the facility and implement new systems. Under her leadership, the facility has developed streamlined protocols for troubleshooting, a well-curated stock list and a website for scientists to access the services provided. They have also generated an entire fleet of mutant flies using CRISPR, now hosted at the Vienna Drosophila Resource Centre (VDRC), one the largest fly stock repositories in the world. Having the mutant flies hosted at VDRC instantly makes them available to scientists around the world, even if they do not have any ties to BLiSC.

Deepti now manages a team of eleven people, who bring different kinds of expertise — from stock maintenance to molecular biology — to the fly facility.  Deepti had this to say about being a manager in a scientific setting: “As a facility manager, whatever I’ve learned has been learned here, on the job. I had no experience of managing before this. This includes the personnel aspect of it, the financial aspect of it and everything else. Managing a research facility comes with its own challenges as you have to relate to specific kinds of people like those in the institute management, people who are immediately working with you in the labs, users of the facility and the academic hierarchy. That challenge is always going to be there.” 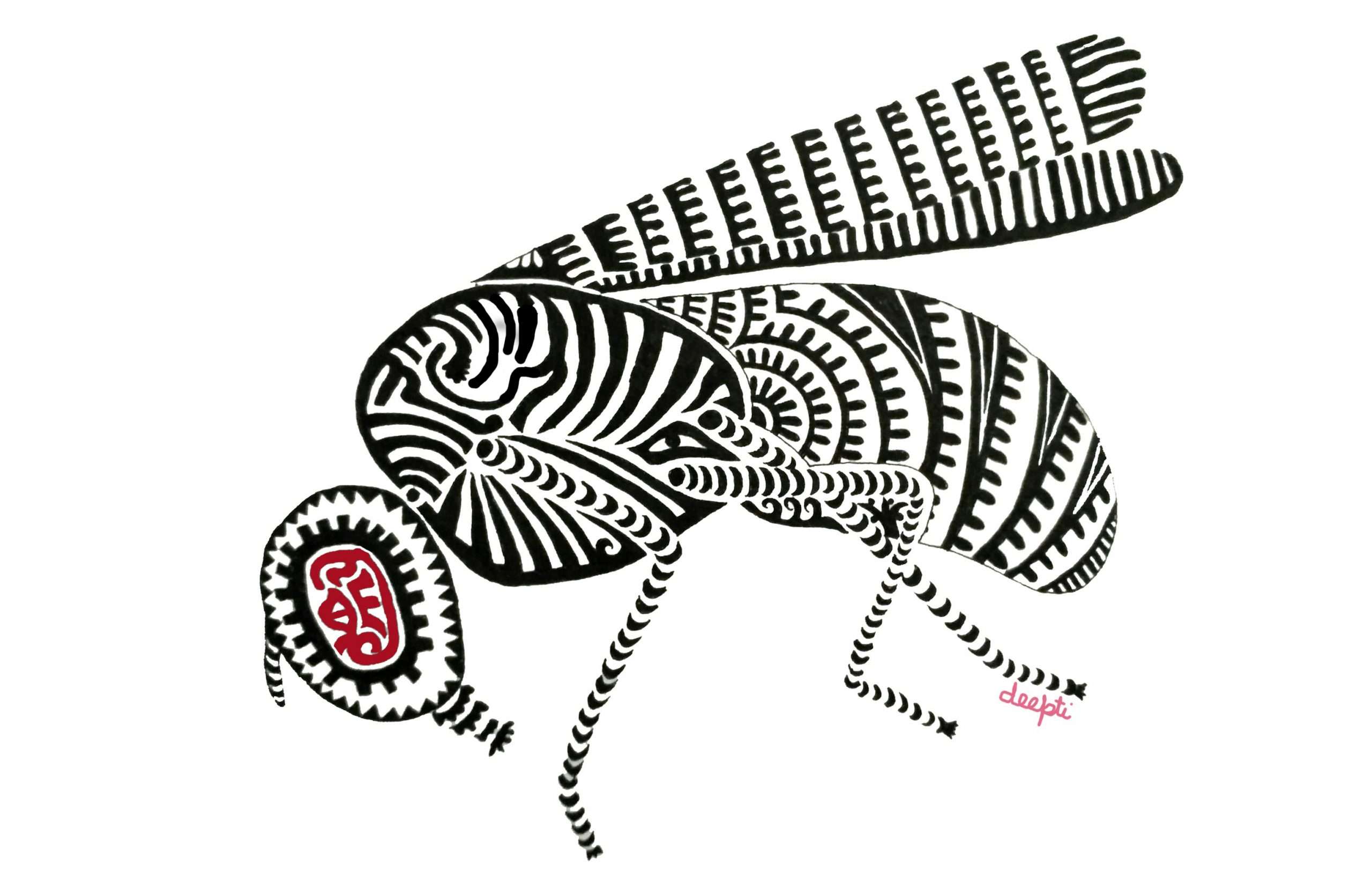 Despite these challenges, Deepti relishes the novelty of the job. “I get bored easily,” she said, “Here I can quickly complete one project and move on to the next.” She also likes to encourage users of the facility to bring fresh ideas to the fore. Going forward, Deepti is eager to drive the facility towards newer directions. Notwithstanding all her achievements, she muses that her high points as a facility manager are yet to come. She said, “The facility would do newer and newer things in the future. That’s where I think it should go.”

Author bio: Sruthi did her PhD from the National Centre for Biological Sciences, Bangalore. She did the old “pipette to pen” transition and is now making her way as a science writer.

Note: This piece is a part of Season 5 of TheLifeofScience.com sponsored by a grant from DBT/Wellcome Trust India Alliance.

1 response to "Deepti and her mutant fruit flies"

I have known Deepti as a scientist, an artist and a great friend. This article captures all these dimensions in a succinct way and highlights the quiet power of scientific freedom and innovation….aka Deepti Trivedi!