IISER Kolkata has taken a step towards recognition and correction of the gender imbalance that exists within its own walls. A new scicomm effort showcases the women scientists of the institute. Arunita Banerjee, the coordinator of this series, tells us more. 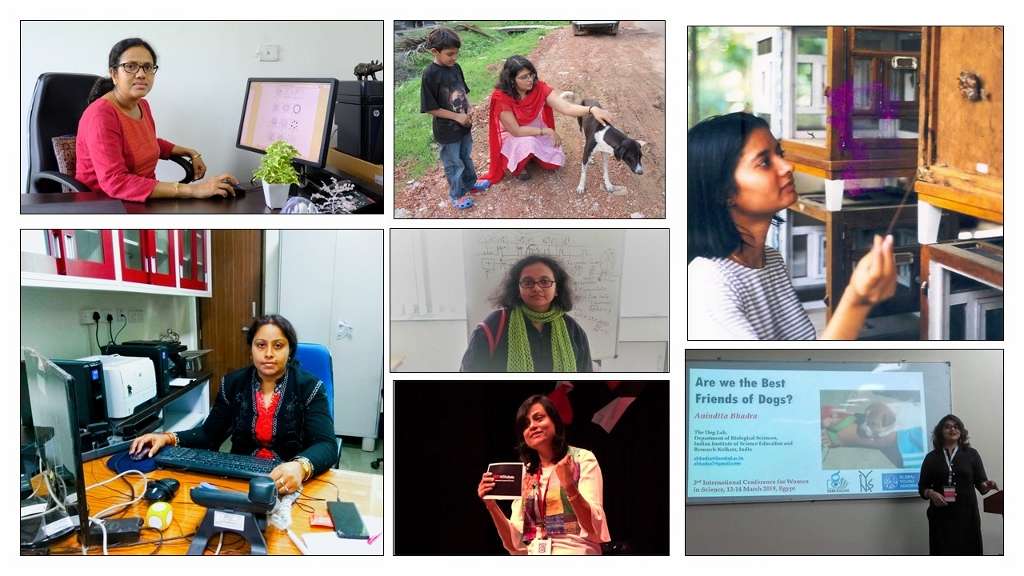 Some IISER-Kolkata faculty who may be covered by the #WIISER initiative in its interview series. From L-R: top row: Rumi, Anindita with her son, Sumana; centre: Koel; bottom row: Mousumi, Neelanjana and Anindita presenting.

On Women’s Day this year, the Indian Institute of Science and Education and Research (IISER) Kolkata launched #WIISER – an initiative to recognise and applaud the contributions of women scientists of the institute. IISERs are premier institutions, envisioned to integrate teaching and basic science education with state-of-the-art research. However, they suffer from a prominent gender imbalance — only ~17% of the faculty are composed of women scientists, on average. At IISER Kolkata, this is even lower, at  12.8%.

#WIISER is a series of interviews that recognises scientific contributions and roadblocks of the women scientists at IISER Kolkata. Anindita Bhadra, Associate Dean of International Relations and Outreach, who was instrumental in launching this, described the initiative: “We talk of equality and equal opportunities across genders and often discuss the problems that women have to face in academia. What we also need to do is to applaud the women who have achieved something in their careers in spite of all these problems. #WIISER is an initiative that aims to applaud the women faculty of IISER Kolkata.”

She added that the series is also intended to provoke the community to raise their eyebrows at how few women there are. “Let someone look at the banner and say, ‘only 14?’ Let someone note the skews in gender balance among the departments and decide to do something to change this. Every little step counts.” And when asked what the name #WIISER meant, she said, “Women in IISER, also women are wiser. And with the women, IISER becomes wiser!”

Anindita approached Cogito – the in-house science communication magazine to be the platform for #WIISER. And an undergrad student with similar ideas immediately shouldered the responsibility! “I was fortunate enough to grow up in a very liberal, open-minded household where my parents helped me understand early on that gender disparity was deeply rooted in our society.  As I read more, I grew cognisant that such disparity was widespread in STEM fields across the globe and even more so in India, but not enough people seemed to care. When I came to college I believed I was in a position to try and change that, and was lucky to have a forum to do so. That was my rationale behind starting this series. Hopefully, it’ll help open people’s eyes to the wonderful work being done in our institution by some incredible (women) scientists and will also go a small way into creating a more inclusive scientific environment in the future, not only for women, but people of all genders.” said Vedanth Sriram, a third year undergrad student at the institute, who is conducting the interview series.

As a research scholar and freelance science communicator, I (Arunita) am coordinating this interview series.

Highlighting achievements may not directly impact numbers but these scientists can serve as inspiration to younger women looking to make it in science. The women faculty at IISER Kolkata are spread across disciplines. The biology department has the maximum number, at eight. The departments of earth sciences and chemical sciences have three and two, respectively. The mathematical and physical science departments have one each, and the interdisciplinary research of these women has made them adjunct faculty of the biological sciences department too.

Rumi De studies the physics behind movement patterns, from microscopic cells to macroscopic animals, using multidisciplinary techniques. Through theoretical modelling and simulations over space and time, she aims to understand various active systems such as cell movement during the development of a fruit fly,  wound healing and prey-predator interactions in animals.

Further demonstrating the interdisciplinary nature of scientific research today, Bidisha Sinha and Neelanjana Sengupta are exploring different molecular aspects of biophysics. Bidisha uses state-of-the-art microscopes and other imaging techniques to understand how cells maintain the integrity of their membranes. She studies what happens when cells are faced with internal disturbances within its structure, thereby affecting its potential to maintain its form.

Neelanjana combines microscopy and computational biology to study how molecules interact with each other when faced with perturbations in temperature and chemicals in the surrounding environment. With these studies, she hopes to get to the bottom of the structural properties of proteins and possibly predict their behaviour.

The Behaviour and Ecology Group in IISER Kolkata is an all-women team. They use ants, stray dogs and zebrafish as systems. Sumana Annagiri’s lab studies unique transportation strategies used by Diacamma indicum, a species of ants, when relocating from one nest to another. Anindita’s research delves into the daily lives of Indian free-ranging dogs, conducting long-term observational studies to understand their ecology and behaviour. She also uses task-based experiments to gauge their cognitive abilities. Anuradha Bhat’s focus is to design conservation strategies of streams and ecosystems thriving on them, based on the distribution patterns and ecology of wild zebrafish, a fresh-water fish found in tropical countries.

Moving on to more fundamental biology, Malancha Ta studies stem cells found in the umbilical cord, which have the potential to eventually form different types of specialised cells. She observed what happens to them under conditions identical to physiological stresses such as increased temperature or external chemical variations.

Jayasri Das Sarma and Koel Das delve into neurobiology, through two different approaches. Jayasri’s lab works with certain coronaviruses which are known to infect mice and cause similar symptoms as the neurodegenerative disease – multiple sclerosis. Her research aims to design therapeutic technologies which may be used to treat multiple sclerosis and other similar diseases.

Koel’s research, on the other hand, lies at the interface of mathematics and neurosciences. Her lab uses pattern recognition tools to explore neural networks within the human brain and the basis of cognitive functions, to understand how humans would perform in real-world tasks.

In earth sciences, Swastika Chatterjee studies the properties of minerals found beneath the earth surface and tries to understand the processes that might occur in them at extreme temperature and pressure conditions, through simulations. Her colleague Sujata Ray’s research is broad-spectrum, covering various aspects of environmental sustainability. For example, she modelled strategies to prevent the escape of carbon dioxide from below Earth’s surface into the atmosphere.

Mousumi Das and Susmita Roy work in the field of theoretical chemistry and biophysical chemistry respectively. While Mousumi works on molecular electronics that could pave the way towards solar cells, Susmita dives deep into the molecular interactions between nucleic acids, to understand the pathophysiology of bacterial and viral diseases.

These are merely concise versions of their research profiles that I have collected as part of my work with #WIISER. It’s important to remember that behind these professional achievements, many scientists, especially women, have had to navigate roadblocks in their personal lives. While life may have been easier for some due to proper family support and resources, some have had to go miles before they slept each night.

Author bio: Arunita Banerjee is a research scholar at IISER Kolkata. She is also a freelance science communicator and the Chief Editor of the in-house magazine Cogito.