At the first of its kind scientific conference, Indian physicists start to agree that something must be done about the gender gap 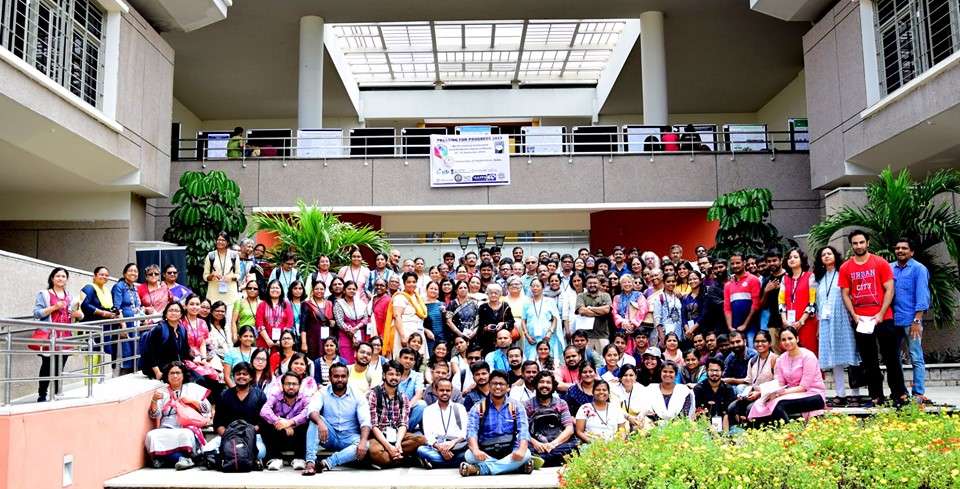 (For audio snippets scroll down)

At the first of its kind science conference, “Pressing for Progress” (PFP) DST representative Vandana Singh announced that DST will accredit Indian universities based on a gender audit similar to the UK’s Athena-SWAN to incentivise gender equity in scientific establishments in India. Details of what the Indian version of such a charter might look like were touched upon at the 3-day conference. As of now, there is no framework for it. Previous reports have suggested an internal committee based self-assessment followed by accreditation by DST. The programme that promises to bring institutional reforms for gender parity will be developed in collaboration with British Council, according to the DST’s monthly report from July 2019.

DST’s support of this meeting, where 70 per cent of delegates were women, encouraged delivery of “action points” on what can be done to close the gender gap in Indian science.

The meeting kickstarted with an ice-breaker event on 18th of September where the organisers, Bindu Bambah, Head of the hosting physics department at the University of Hyderabad and Prajval Shastri, retired astrophysicist and chair of Indian Physics Association’s The Gender in Physics Working Group, reiterated the need for a dialogue on gender parity within the Indian physics community. Prajval said the Baltimore charter for women in astronomy, authored by Meg Urry,  opened her eyes to the systemic nature of the gender-related problems, at the welcome reception, while Bindu hoped to see “a Hyderabad charter” at the end of 3 days.

Megan Urry, celebrated astrophysicist at Yale University, delivered a talk and launched the children’s book 31 Fantastic Adventures in Science authored by Aashima Freidog and Nandita Jayaraj. In her talk titled, “What I Love (and Don’t) About Physics”, Megan said women in science are akin to the proverbial ‘canary in a coal mine’ — more susceptible to prevailing issues in science, which left unaddressed, would affect the whole community negatively.

On the first day, inaugural green flags by the cis-male bosses of Indian science and Vandana Nanal (Secretary, IPA) kickstarted the proceedings. Ashutosh Sharma, Secretary of the Department of Science & Technology commented that what was required was not more “thick papers on what the problems are” but “actionable points”. The question that lingered in the room was why existing policies and recommendations have not been implemented and/or enforced, such as mandatory & gender neutral childcare policies, inclusion of women in leadership positions & committees, compulsory gender sensitisation workshops, functional Internal Complaints’ Committees and adequately penalising sexual harassers at institutes funded by the DST and other government funding bodies.

“Women in science are the canary in the coal-mine”

Principal Scientific Adviser to the Government of India, K VijayRaghavan tuned in from Delhi to call on the conference to challenge the dominant “deeply flawed arguments” that are generally used to exclude women. These “excuses” that must be “overthrown”, he said, can be biological – ‘women are unable to accomplish as much as men’, sociological – ‘our social structures don’t allow the inclusion of women’, economical – ‘in an open market, women are free join the workforce’ and cultural – ‘our culture hasn’t changed much’.

“We are a flawed meritocracy. “

Prajval Shastri provided a much-needed reality check of contrasting the views presented thus far. “The selected fraction of women (e.g. among faculty in a department or in honours lists), being smaller than the fraction in the pool, is a clear sign of discriminatory practice. Clearly we are a flawed meritocracy. And as physicists, the objective scientists, we are more culpable than outside society in perpetuating a gender gap. Which is why we need this conference,” she said.

Bimla Buti, a senior scientist who set up Institute of Plasma Research in the 80s – an offshoot from PRL, and the former Director of Plasma Physics at the International Centre for Theoretical Physics in Italy, was felicitated, coincidentally on her 86th birthday. She shared anecdotes from her life including how she was once rejected by IIT Delhi, only to be hired by Vikram Sarabhai to PRL a few months later. Bimla also shared her disdain at the woeful gender ratio of the country’s top science award the Shanti Swarup Bhatnagar Prize. In her essay in Lilavati’s Daughters, she had commented that it was “almost impossible for me, a woman scientist in a man-dominated field, to get nominated for prestigious awards like the Bhatnagar prize.”

The delegates of PFP 2019 stood to benefit from three workshops on “understanding gender equity”. One of them, conducted by Bhanumathy Vasudevan and Payal Gupta, helped the participants bond through commonalities in their life and introspect the effect of social injunctions on their lives. A theatre and improvisation exercise-based workshop by Swasthika Ramamurthy and Madhu Shukla explored personal agency and gender stereotypes and how they affect our sense of belonging. Both the workshops created a safe space for the participants to talk about their observations, experiences and open up their thoughts and opinions to discussions.

The third workshop ‘Understanding Sexual Harassment Dynamics’ was not as interactive as the other two. Most women raised their hands in unison about having faced sexual harassment at some point or the other in their life. Some segments such as the one on understanding consent on inappropriate workplace behaviour would have been more meaningful if the audience weren’t predominantly female. On the other hand, lawyer Vasudha Nagaraj’s education of the provisions of the law was helpful. The expectation of participants for the workshop’s material to be of practical use remained unmet.

A fresh change in pace was brought on by a lecture on quantum technologies by Aditi De – last year she became the first woman to ever win the Shanti Swarup Bhatnagar Prize in the Physical Science category. Though this was one of the physics lectures, Aditi displayed some effective science communication skills as was evident from the audience engagement that followed. She did not ignore the important questions; she brought up the gender ratio at her institute, Harishchandra Research Institute in Allahabad (three women among 18 faculty members), and rightly suggested that gender equity is not mutually exclusive from science. The lecture on the growth of supermassive black holes by Megan Urry also kept the delegates successfully glued to their chairs. This rung true even on the final day of the conference during the talk by surface science expert Shikha Varma from Institute of Physics, Bhubaneswar. While acknowledging pioneers in her field, Shikha’s session also brought up the systematic omission of scientists like Rosalind Franklin and Agnes Pockels.

The panel discussion on “Gender disparity in physics: Whose problem is it?” included three men among six panellists – a gender-neutral panel! Pratibha Jolly, former Principal of Miranda House, a women’s college in New Delhi, served as the moderator. It began with Rajesh Gopakumar, Centre Director of ICTS-TIFR, Bangalore dismissing toxic masculinity and how it had seeped into the academic culture. Satyavani Vemparala from IMSc questioned the message being sent to prospective women physicist when discussions on gender parity tend to become echo chambers of socio-economic issues faced by women everywhere. Ram Ramaswamy (IIT-Delhi) recommended making gender sensitisation an essential training module for all MHRD leadership programmes. When Ajit Srivastava (IoP, Bhubaneswar) asked why it was hard to ensure gender parity on committees, Ram turned defensive, suggesting that this was easier said than done. A number of times during the discussion it became evident that the concept of reservations was looked down upon. Ram said: “I think we don’t want quota.” This provoked an audience member, educator and mathematician Jayasree Subramanian, to question this attitude. There was no response except from Ajit who supported the need for reservations to correct historical injustices.

On the topic of sexual harassment, the general consensus seemed to be that an untrained Internal Complaints Committee (ICC) was proving to be unhelpful for victims but suggestions on how to make ICCs functional and promoting healthy policies remained elusive. At least twice during the conference, scientists who’ve themselves served on ICCs, admitted and even advised complainants to go to the police directly rather than involving ICCs, which in their own admission are ineffective.

Bindu Bambah, HoD of Dept. of Physics, Univeristy of Hyderabad

The third and final day of the conference was an intense series of plenary talks on different approaches to gender equity, leading up to the session on recommendations of the conference. Chayanika Shah, feminist scholar and physicist by training and Gita Chadha (University of Mumbai) spoke about the sociology of science, from covering ground gender politics to the deconstruction of the “scientific genius”. Aashima (TheLifeOfScience.com) talked about the science media platform thelifeofscience.com that has been reporting the lived experiences of women scientists with Nandita and how it led to their first book! The conference ended with recommendations presented by Srubabati Goswami, physicist at PRL and Co-chair of the conference with Prajval.

Here’s the audio of Gita Chadha’s (University of Mumbai) delivering her talk titled: ‘Questioning the Construction of the Scientific Genius’ where she introduced her field of Feminist Studies of Science

Of the interventions suggested by many to improve the ratio of women in science, those aimed at high school or lower grade students was a recurrent one. Meant to solve the issues stemming from socio-cultural constraints, such as pressure to marry and reluctance to invest in education for girls; gender neutrality in textbooks, women’s toilets in schools and state colleges and on-campus residence were suggested solutions.

In hindsight, making the selection procedure for faculty positions and mid- or senior-level leadership positions, awards and grants transparent, should have perhaps been given the most importance. While the members of the scientific fraternity debated measures to bring about gender equity in open spaces, the decisions being made behind closed doors, remain unchallenged.

This report was published on “Research Matters”

indian women in scienceseason4Women in Science

11 faculties out of 17 faculties are Bengalis at HRI. Physics Department. This shows itself how some partiality is under current there.