At the backdrop of the 2019 Kodagu floods, Switzerland-based agroforestry researcher Maike Nesper, talks about working with small coffee farmers to find sustainable ways of growing coffee. 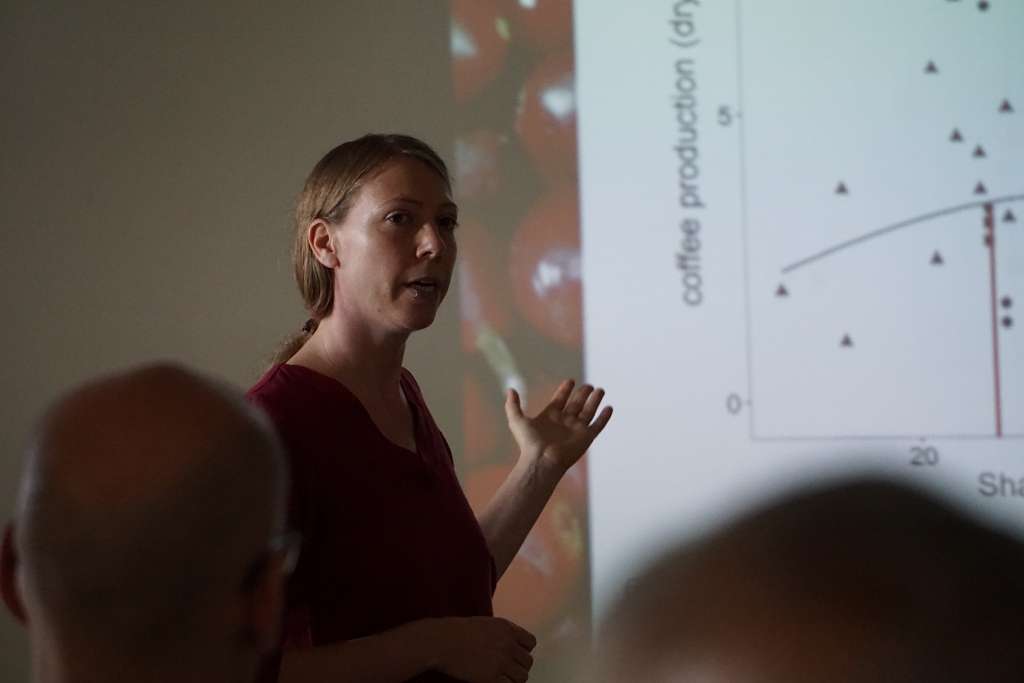 Maike Nesper giving a talk at a workshop.

As south-west India finally has a respite from the recent heavy rains, the discussions have now turned to what went wrong. In the district of Kodagu, nine days of non-stop rains wreaked havoc in August; this came after a drought-like situation earlier in the year and a record-breaking spell of rains last year. Much of the blame for the drought-flood-drought-flood trend in Kodagu has been laid on coffee plantations. Today, over 43% of India’s coffee plantations are located here. According to the India State of Forest Report (ISFR) – a publication by the Forest Survey of India (FSI) – the district has lost 10,600 hectares of forest land just in the past 12 years. Although coffee has been grown in this area for a long time, the growth of big companies like Starbucks and TATA coffee, that sell and supply coffee from the area has accelerated the loss of forests.

In the midst of a polarising forest-vs- agriculture debate in the Western Ghats, one forestry researcher from Switzerland provides context: “Coffee was introduced from Yemen to India by the Sufi Baba Budan,” said Maike Nesper, who spent many years studying coffee agroforestry in Kodagu. “In the end of the 19th century, coffee production was expanded throughout the country by the British.” She also pointed out that some of the plantations in Coorg are as old as 100 years, adding “These traditional coffee agroforests retain a huge diversity of forest remnants and are therefore an important refuge for native biodiversity.”

Nevertheless, Maike has recognised and contributed to the body of evidence that there is indeed a grave problem with the way coffee is being grown today. “Nowadays, native trees are replaced by Grevillea robusta (commonly known as the silver oak tree), which reduces biodiversity drastically.” Currently a certifier at International Certification Bio Suisse, the federation of organic farmers in Switzerland, Maike built her expertise in agroforestry by studying coffee plantations in Kodagu during her graduate studies at ETH Zurich. Her interest in India began when she was just twenty years old; one of the many European students backpacking through Rajasthan and the western coast of the country. She returned to Europe with the intuition that she would be back. As it turned out, Maike was soon to establish an even stronger bond with this place – not as a tourist this time but as a scientist.

As a student of science, she developed an interest in ecosystem services, a field that lies at the intersection of environmental and agricultural studies. These include services provided by natural systems, such as nutrient cycling, pollination, soil fertility and pest control – which support agricultural production in a sustainable manner. This inspired Maike to join the Ecosystem Management group at ETH Zurich for her doctoral studies in agroforestry.

Agroforestry refers to the beneficial combination of agriculture and forestry, i.e. growing trees or shrubs around or among crops to support the biodiversity and ensure a healthier ecosystem. Maike’s research was focused on the coffee plantations of Kodagu, commonly known as Coorg, situated on the Western Ghats in Karnataka. India was a great place for agroforestry research because unlike other places in the world where coffee is either cultivated as a monoculture (growing a single crop in an area) or under the canopy of one single tree species, here it is grown under a great diversity of native shade trees.

However, as price fluctuations and an increasingly unpredictable climate push small farmers under more and more financial pressures, they are starting to look for ways to diversify their income. One of the most popular ways to do this is by growing exotic trees from which harvesting timber is legal (it’s still illegal to harvest timber of native trees). These trees, such as the Australian silver oak, can also provide support for pepper vines. The catch is that these drastically reduce the native biodiversity. Moreover, ecosystem services such as fertility of the soil and the quality of the coffee are also affected. As a result, Kodagu has become extremely vulnerable to climate change. Maike wanted to find out exactly how this change in coffee cultivation practice was affecting the production, and if there was a case to be made for farmers to retain native shade trees.

Working in the same group, but a few years Maike’s senior, was an Indian ecologist named Smitha Krishnan. “I was lucky to have Smitha, who was then doing her post-doctoral studies in the same area. She was my close collaborator, supervisor and mentor,” said Maike in an interview at her erstwhile lab at ETH Zurich. Smitha was studying how tree management in plantations affect coffee pollination and bee activity. Being from Kerala and having lived in Karnataka for years, Smitha already knew the landscape and many of the local farmers, including local expert Cheppudira Kushalappa. Kushalappa is not just a coffee farmer himself, but also the Dean of the College of Forestry in Shivamogga. “Having Smitha’s and Dr Kushalappa’s support was crucial to gain the farmers’ interest and trust for the study”, recalls Maike.

Coffee is produced in over 11 million hectares of land in the world, and these include small plantations – called ‘smallholdings’ – owned by over 26 million farmers who depend on coffee production for their livelihood. Maike studied 25 such estates in Kodagu for over three years. She spent much of this time among the coffee trees, marking them, counting their flowers, examining the development of berries and ripe cherries, recording the temperature and humidity, catching leaf litter in nets, taking soil and leaf samples – her research depended on lots of meticulous data collection, and later, data analysis.

While the environmentally disastrous effects of plantations are frequently discussed, agroforestry researchers try to find a middle ground. Scientists like those in the ecosystem management group at ETH gather data to build up evidence that there need not be such a stark dichotomy between forests and agriculture; they can exist side-by-side in a way that can be profitable to farmers, and cause the least damage to the environment.

Sujatha Goel, a Kodagu-based biologist who has for more than two decades been cultivating coffee and spices along principles of agro-ecology attests to the role of traditional coffee agroforests as an important refuge for native biodiversity. “We must encourage as much fallow areas (cultivated land that is allowed to lie idle) as possible on farmlands as these stretches are what will serve as habitats for the small wildlife which these areas are so abundant in. Places such as Kodagu in the Western Ghats need to realise that these should be declared as zero-pesticide zones, and ban all agrichemicals totally. There are several organic farming practices across the world which provide ample evidence of good crop yields and result in the restoration of soils and biodiversity.”

The ETH Zurich team, including Maike and Smitha, were able to find evidence for several of their hypotheses.

All these factors were shown to affect production as well as the quality of coffee. The scientists believe that is important to include such often neglected effects in the economical calculations to understand the profitability of a system.

More importantly, large scale loss of native trees is probably making the farmers much more vulnerable during monsoons. Maike’s data showed that agroforests with exotic tree cover were characterised by lower soil carbon (less fertile) likely due to lower litter quality. This, in turn, reduces microbial activity in the soil and thereby its porosity is greatly affected. All this, she deduces, is likely responsible for an increase in runoff. “The prolongation of the drought season has been observed over the last 30 years and the intensification of rainfall during monsoon has been forecasted by the Intergovernmental Panel on Climate Change (IPCC). Trees in agroforestry systems have the potential to mitigate such risks for understory crops, and particularly for coffee which is highly sensitive to climatic change.”

Maike also pointed out that plants in more diverse systems have less internal competition and therefore often cope better with droughts. “This is due to different rooting depths of different tree species result in more balanced water use throughout different depth layers in the soil. While trees which root all in the same depth are more likely to use up the water in the specific rooting depth layer more quickly and are therefore less resilient to drought.”

“However, there should be effective incentives set in place for farmers to use native trees over exotic trees. From the comfort of a nice, warm room in the west, it’s far too easy to tell farmers in extraordinarily difficult circumstances to risk their livelihood because we are concerned about the environment,” says Maike. Such studies emphasise that it is crucial that government bodies – and big corporations whose plantations continue to burgeon – follow evidence-based conservation strategies in mind in mind while designing strategies for biodiversity conservation.