Lab technicians might be appreciated in the scientific community but rarely do we stop and listen to their stories. Cyrus Khan speaks to KV Boby, a technician at TIFR Bombay. 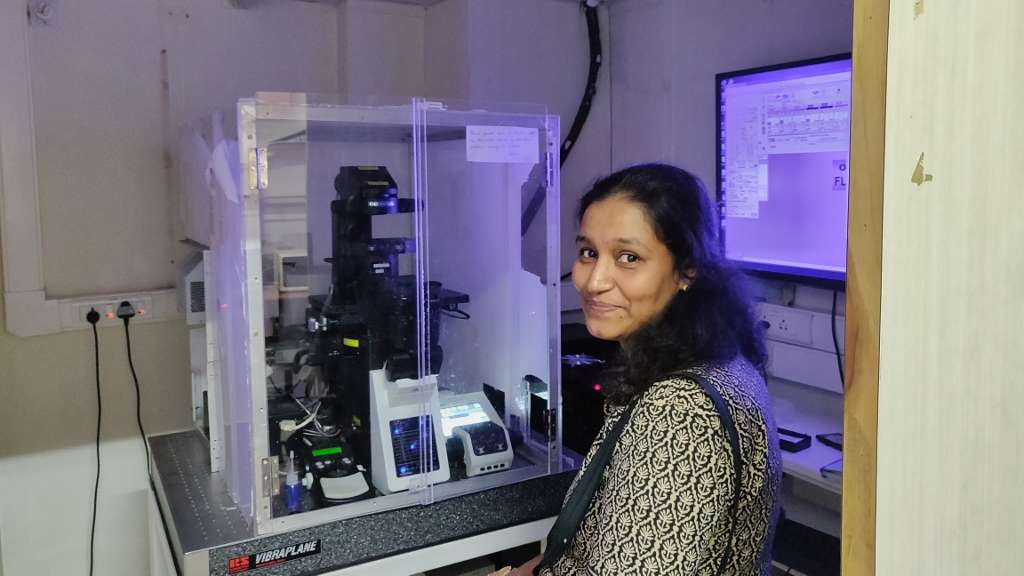 Boby KV demonstrates the use of a confocal microscope set-up at DBS, TIFR.

On the road to discovery, a vast majority of time is spent designing experiments, creating the apparatus and collecting data (and doing it all over again). The heads of the lab and other faculty members put their brains together to shape a project, apply for funding and manage the lab. Most of the hands-on work, whether it’s in physics or biology, is done by their lab team, usually comprising of grad students, technicians and scientific officers, without which, none of the great discoveries would materialise.

Boby quickly trained my intern @abhi7863 to use the Sted and helped fine tune our imaging as well !!
She rescued our entire big experiment which would have otherwise gone for a toss @shubhatole

To gain insight into the daily activities happening inside labs, I visited Boby KV, a technician at the picturesque seaside campus of the Tata Institute of Fundamental Research (TIFR), on the tip of Mumbai. I was investigating the less publicised, technical aspects of a scientific enquiry. Boby’s work is endorsed by several faculty on campus, like Sreelaja Nair, Vidita Vaidya and Deepak Modi. They have all benefited in some way from her engineering, yet she seemed a bit puzzled as to why I was bothering to interview her.

We sat on the hallmark brown couches outside the sea-facing West Canteen, the classic informal meeting point on the campus. We started to get to know each other. Boby is reserved, but not unusually so for those who work at research institutions. She hails from a remote village in Kerala, and hence abbreviates her polysyllabic family name to KV so that the rest of us don’t butcher it.

Working in the Department of Biological Sciences, Boby has been a unique asset. She describes herself as “a common resource for the department”, assisting any lab. As she explains, “I am not directly involved in any experiments, we (the technical staff) are in the background, creating and maintaining the systems on which the experiments run”. You get the sense that she is quite proud of the diversity of her work. “Any breakdown needs to be taken care of, whether it is vision, or computer networking, everything, everything!” Over the years, Boby has done everything from fabricating small electrodes to supervising the construction of facilities at TIFR.

At the TIFR campus, Mumbai.

Her path through TIFR was distinctive from the start. She graduated with a degree in Instrumentation Engineering from a college in Kerala, and when she was looking for a job, a relative who worked at TIFR at the time helped her apply. When she joined in October 1999, she was the first and only technician in the Department of Biological Sciences. At the time, the labs needed small electronic and mechanical components for experiments that were not readily available in the market. For a biologist, fabricating them would have been almost prohibitively time-consuming. But equipped with the knowledge from her college, Boby applied the theory she had learnt directly into practice in the first couple of years.

She first began working under (late) KS Krishnan, building custom electronics for his work on Drosophila melanogaster (common fruit fly). Soon, more labs asked for Boby’s help, from electrodes for electrophoresis or a training wheel for rodents. By 2004-05, all those types of equipment started becoming more commercially available and her work profile has changed accordingly. Alongside maintaining the systems that the TIFR labs ran on, she even took up administrative and financial responsibilities.

As Boby arranges a set of collection tubes and maintains inventory for the lab.

After a decade or so, Boby’s scientific life bloomed even more when she started exploring the newly emerging field of confocal microscopy. In 2013, she was finally joined by a second technician who could take on part of her workload. This freed up time to learn confocal microscopy.

Mastering confocal microscopy is by no means trivial, but with the help of Krishanu Ray (Chairperson, Department of Biological Sciences (DBS)-TIFR), she is now not only adept at using it but also trains graduate students to use it. “That system is slightly complicated,” she understates massively.

“Now, I’m enjoying what I do,” she says, with a wry smile on her face.

According to Boby, there are several reasons she could find her calling at TIFR. She recalls one of the first projects she was a part of when she arrived. An apparatus was needed for controlled supply of CO2 to anaesthetise flies (Drosophila) through a pedal mechanism. The idea was given to her by KS Krishnan and she constructed it. But in the first test of the system, for a reason she was never able to glean, the entire electronics – burned out. So she stopped, thought about it and replaced the components, but it still didn’t work. The third design, however, was the perfect one, which she could then repeatedly produce for many years.

“If in the first incident when it had gone wrong, they had fired me, my confidence would have gone. I stood by my mistakes, and I was ready to accept them because I learned from them”, she said. Everything she does now, she professes, was learnt hands-on from work at TIFR. “I had to do it, so while doing it, I learnt it.” But being given room to make mistakes is not common in the Indian working environment, or even specifically the education system.

Even today, Boby still works on routine stuff, like fabricating electrodes used in electrophoresis by members of Shubha Tole’s and Vidita Vaidya’s lab. When specifications demand improvements, constructing electrodes with the specific thickness of platinum, she casually remarks  “They are very simple to make, they are not so complicated – but for them, they are very useful” – she says, with trademark humility. The value that they ascribe to her work – even though some of it may seem trivial to her – is what makes her job satisfying.

When I ask her whether women in the department feel empowered today, she scoffs at my question. She explains that women in TIFR, especially in her department have not had to deal with much sexism because of excellent role models like Late Veronica Rodrigues (former HoD at Department of Biological Sciences, TIFR), Shubha Tole (winner of the Infosys Prize and Shanti Swarup Bhatnagar awardee). She describes them as “all power ladies”.

“Veronica was such a powerful HoD, she was able to execute what she believed in.” She credits Veronica with bringing her out of her shell. “She made me what I am.” By being expressly clear about her standards and saying: “This is how you have to execute, this is the expectation you have to meet.”  In being a mentor and a guide that Boby could relate to – Veronica could be an example of what women in science could benefit from – several powerful role models and mentors that pave the way for other women.

She recalls another anecdote that perfectly elucidates this attitude. When the department was selecting another technician, Boby said to Veronica “It would be nice if you could select a male candidate, because she felt that he would be able to help with the harder work. But Veronica returned with a volley, exclaiming “Why do you think so, you are doing everything just fine!” And it was that confidence and belief in her that Boby cherishes to this day. She maintains that they believed in her capabilities more than she did in herself.

As we conclude our chat, Boby confides in me that she was still puzzled as to why anyone would want to interview her. “Initially I was reluctant to do it, I didn’t know what to share,” she said.

One of the several instrumentations facilities Boby KV maintains for the experiments being conducted at TIFR.

But imagine if the only images ever shared about plants were the flowers. People would be quite confused when they first see a plant in real life – a dynamic system with its leaves, stem and root systems, all interconnected and interdependent. When we portray science in the popular media, it’s easy to only share the principal investigators – the flowers that produce the fruit. But that would not only neglect the rest of the beauty of the plant, but also miss out on all the wisdom it has to offer.

When I ask Boby what the future holds for her, she reveals plans to move further into the microscopy field. “I don’t know how much more is possible, but I’m trying,” she said in what I’ve come to understand from her to mean “I will definitely do it.”

Cyrus Khan is a freelance science communicator and also works on a project in the Department of Condensed Matter Physics at TIFR.
Pictures by Cyrus Khan!