Nandita reports from a recent visit to one of the largest big science experiments of the world: ITER. She writes about India's participation in this project. 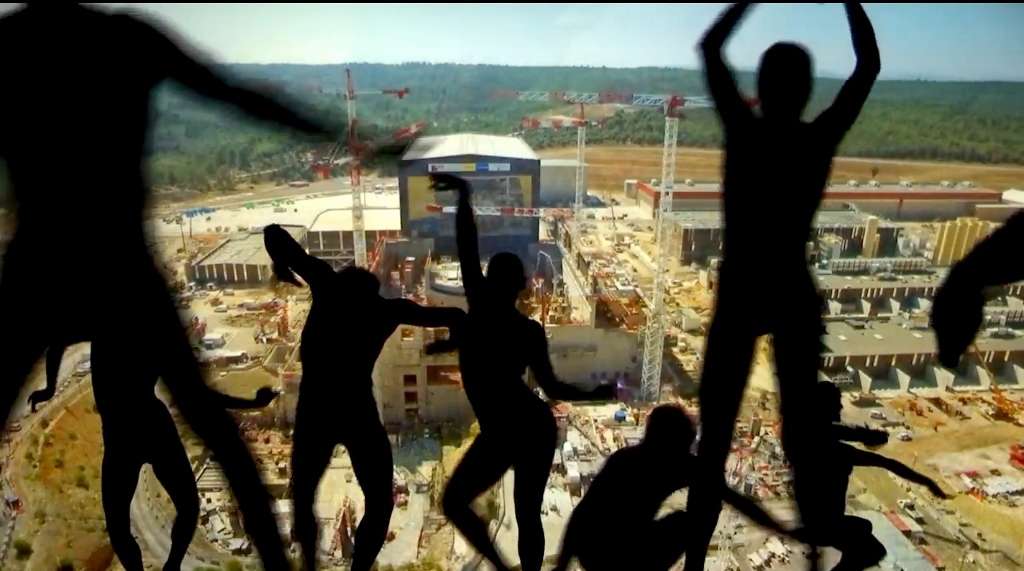 Chandrayaan-2 was not India’s only big science & tech achievement this July. Just a day after the launch of the moon mission, unbeknownst to most, was another momentous occasion for Indian science. The stars of this lesser-hyped show were a group of Indian nuclear physicists and engineers stationed at Saint-Paul-lès-Durance, a town of about 1,000 inhabitants in the south of France.

This is the site of ITER, a 35-country-effort to build the world’s first nuclear fusion device that, if all goes well, will be capable of producing clean fusion energy by 2045. Nine per cent of the $US-25-billion-worth project is borne by India as an ‘in kind’ contribution and 23 July 2019 was a celebration of this contribution!

‘ITER’ was originally an acronym for International Thermonuclear Experimental Reactor, but recently has been rebranded as ‘iter’ which is Latin for ‘the way’. India’s biggest contribution to this is the single largest component of the ITER machine, the very shell within which the fusion reactor is placed, called the cryostat. Besides providing structural support to the machine, the cryostat’s primary function is to maintain the conditions of extremely low temperatures and vacuum needed for the fusion reaction within to be sustained (only at -269 degrees Celsius can the superconducting properties of the machine’s magnets crucial to the fusion reaction be maintained). “It will be the biggest vacuum vessel in the world, made of special dual mark stainless steel produced in India and France,” said Anil Bharadwaj, the group leader of the cryostat system. Thirty metres tall and as wide, the cryostat can also be thought of as a massive thermos flask or even the world’s largest refrigerator.

The cryostat will be made of four components – a soup dish-shaped base weighing 1,250-tonnes, a lower cylinder, an upper cylinder and a lid. Currently, the lid is being built in Larson &Toubro’s Hazira facility in Gujarat, and the upper cylinder is being manufactured in a giant workshop at the ITER site in France. The 5,000-square-metre cryostat workshop, I was repeatedly told while on a guided tour of the facility, is owned by India and is something of a ‘mini-India’ within the campus. On July 23 programme the scientists here celebrated the completion of the fabrication of the base and the lower cylinder of the cryostat. With this, 60% of the ITER project is complete.

The fuss about fusion

While most of the world still depends on fossil fuel-based plants for energy, about 11% comes from about 450 nuclear reactors around the world; however, all of these employ the principle of ‘nuclear fission’, the breakdown of large and unstable radioactive atoms to smaller ones. While often touted as being green and more environmentally friendly, disasters like Chernobyl, and more recently in Fukushima, Japan, as well as the looming reality of radioactive waste piling up on Earth has made it clear that nuclear fission-based power is far from ideal. Several countries in Europe have begun withdrawing from nuclear power and new nuclear power plant projects are facing great resistance from local populations as seen in Tamil Nadu’s Kudankulam. Meanwhile, renewable sources of energy like wind and solar still seem to be plagued by doubts about their newness, efficiency and intermittency. Use of fossil fuels remains persistent. This puts the earth’s ecosystems under increasing pressure and ensures the worsening of the climate crisis we already face. The promise of nuclear fusion energy is the balm for the insufferable status-quo.

The difference between fission and fusion is key for anyone trying to understand what the ITER fuss is about. Just as fission divides, fusion combines. It’s simple enough: at very high temperatures, hydrogen atoms collide and fuse into the heavier element helium. It’s not an exaggeration to say that anything and anyone we have ever known exists because of fusion; for fusion is what powers the sun. In the sun, 600 millions tonnes of hydrogen undergo fusion every second! So what is it about nuclear fusion that excited 35 countries to invest large amounts of resources, time, money and scientific talent on it (India’s contributions alone will be worth Rs 10,000 crore)? It’s not the helium produced as the end result of the fusion reaction but the tremendous amounts of energy that is released in the process. If this energy could be harnessed as electricity, theoretically, the world’s energy woes could end, and human civilization could bypass the environmentally disastrous side-effects of fossil fuels and radioactive waste.

Nevertheless, fusion scientists today still feel misunderstood. The word ‘nuclear’ and ‘atomic’ get a bad rap, and in countries like India where conditions are ripe for disinformation. “The first thing people say when I tell them I’m in nuclear physics is ‘oh you make bombs’,” laughed Joyeeta Sinha, a postdoctoral researcher who joined ITER this year, at an interview at her office in July. Her senior colleague Biswanath Sarkar, concurred that nuclear physics has a bad reputation. To him, it is clear that this is because of the stark difference between the level of awareness and engagement of nuclear science projects with the public. “I have seen in India, in the Department of Atomic Energy and Institute of Plasma Research, for example, there are open days in schools, but there is a difference. Here in ITER, the neighbouring village visit the facility from time-to-time. There is an interaction and involvement that is definitely missing in India.”

India is by no means new to nuclear fusion research. The first nuclear fusion device was created by Russians in 1968 and named ‘tokamak’. Since then, tokamak devices began sprouting up all over the industrialised world, including India. “Fusion research began in India way back in the 1980s,” pointed out Sarkar, who has been involved in ITER since the partnership began. “It began with the contributions of late professor PK Kaw and then slowly grew till the first tokamak ‘Aditya’ began functioning in 1989 and later there was SST-1.” The Aditya tokamak has been upgraded since and is still working today at its home in the Ahmedabad-based Institute for Plasma Research (IPR) where Sarkar started his career.

Today, IPR is where the ITER-India action is taking place. As much historical expertise, the scientists there have with tokamaks, this is not a job for physicists alone. Not when the goal is to build a tokamak 60 metres tall. Keeping in mind the enormity of the engineering feats required to make the cryostat a reality, ITER India invited bids from construction companies, and in 2012 it was announced that Larson & Toubro had won the contract for this. The larger parts, however, too massive to transport, would be built by the company at the ITER site inside the cryostat workshop. The cryostat, though the biggest by far, is only one of the nine systems that India has been charged with developing for ITER.

Today, India has a very strong presence in the ITER site and the cryostat workshop especially really does feel like a ‘mini’ India in the south of France; notice boards are often in Hindi, and young Indian engineers mill around the vast space. One of the Indian staff commented that in the early days it was quite challenging for his vegetarian colleagues to find food options, but today the canteen provides several more variety for them. It is also reportedly common to witness the Hindu tradition of breaking a coconut to mark the start of something new. Not at the July 23 celebration though. This time, as ITER Director Bernard Bigot said, “the French naval tradition of smashing a bottle of champagne on the hull of a seafaring vessel exceptionally and temporarily replaced the ‘coconut breaking’ ceremony.”

At the event Bigot, credited with turning things around for ITER after a period of long delays, described ITER as “men and women working to the best of their ability in different parts of the world to achieve an utterly ambitious and difficult task—one that is essential for the future of our civilization.” Despite the truth in his words, I couldn’t help find some irony in his mention of ‘men and women’. While his intention was to be inclusive and that’s a very positive thing, the fact remains, and he himself acknowledges this, that women are highly underrepresented in this mega scientific venture. It is extremely rare to spot a woman in any of the workshops, which is easy to understand considering that most of the staff there are mechanical/structural/civil engineers, fields that are historically male-dominated. But what could explain the lack of scientists in the research teams? The ITER-India teams based in IPR too are heavily skewed with only nine of their 130 listed staff – at least as far as I could count – being women, and only one of them, Aparajita Mukherjee, leading a team.

Sarkar, who is often on recruitment committees, said that there is a definite acknowledgement of this gap. “I try to positively select candidates from these categories [women]. If I find them capable of maintaining the standard, then for sure it is done [they are hired]… but the number of applications from women are less.” Bharadwaj, a mechanical engineer, added that this is a universal problem and in fact he finds the number of women in IPR more than at ITER. Joyeeta Sinha, the only Indian woman scientist working at ITER, said: “I was always a minority, even while studying [in Switzerland], and I agree that the numbers were maybe better in India. I don’t see any reason women shouldn’t join nuclear physics. I feel it could be a fear of maths keeping women away. There are no extra challenges. If you are good at it, you are good at it.”

While Bigot promised that ITER is trying its best to improve the gender gap situation, Laban Coblentz who heads communications said that there were also other representation issues to take care of. “Logically if China, India, US, Japan, Korea and others are paying 9%, they should have 9% of the staff, but only China has this. India and others have only 4-5%,” he said. “Our push right now is to level those numbers – so there is a push first for geographic diversity as well as gender diversity.”

Still some way to go

July 23 saw many prominent faces fly in to the south of France, and take the 1-hour bus ride from the closest station at Aix-de-Provence to the ITER facility. One of them was that of Anil Kakodkar, renowned nuclear physicist and former chairman of the Atomic Energy Commission of India. Kakodkar showered praise on ITER calling it “our hope for the energy freedom of the world at large and for the development of the large part of humanity that is still undeveloped” and referring to the uniquely international nature of the project as “the new paradigm that humanity is desperately looking for.”

Expectations are sky high, but for the ITER staff, it’s on to the next landmark – the start of assembly next spring, “first plasma” in 6.5 years and – if all goes well – the facility can be powered up by 2035.