To mark July 26 as International Day for the Conservation of the Mangrove Ecosystems an interdisciplinary researcher shares her heart-wrenching story from the Sundarbans. 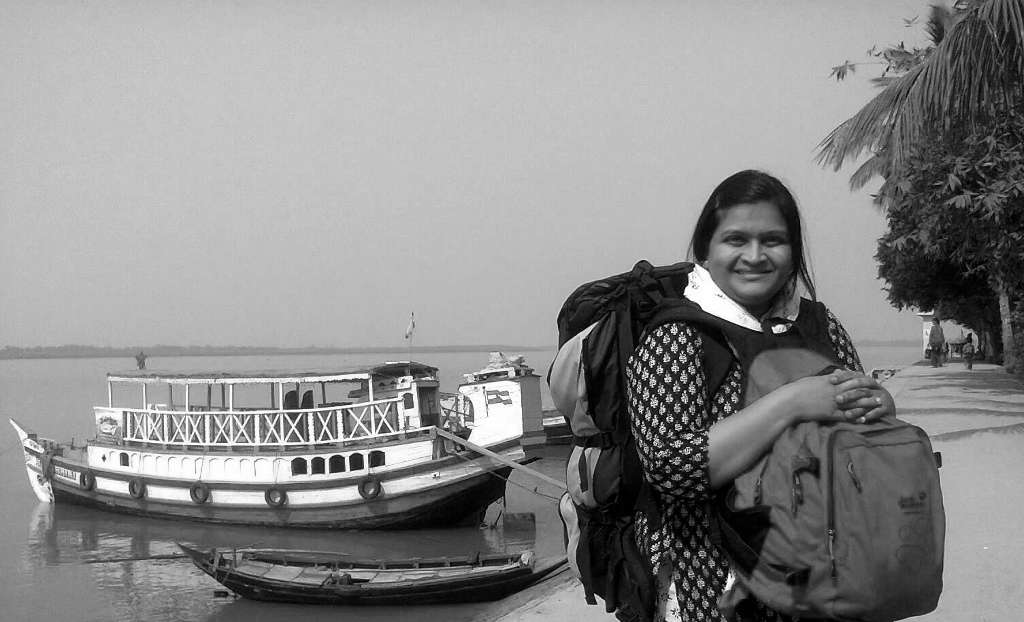 Neelambari Phalkey at the Ferry point in Patharpratima (2014) – en route to one of my field study sites in the Sundarban Delta. Image via Neelambari

I found myself travelling to the remote islands of the Sundarbans with no clear plan for return. Nature takes a harsh turn in this region: floods, droughts, tides lash out on the islands every day and high-speed storms and cyclones are common, often leading to crumbled homes. The indigenous communities living here are confronted by uncertainties within their economies, food habits and survival in general.

The journey was long, involving various modes of transport.  I boarded the slow rickety train from Sealdah in Kolkata to the town of Canning in the Sunderban. I gathered my wits and performed a balancing act on a narrow wooden plank as I got on a ferry from Goadkhali ferry point. This gutsy manoeuvre between the bank and the boat would become routine over the next two-and-a-half years, but the first time was special. The local boat cradled its way into the inaccessible misty island of Gosaba for my first-ever assessment of the area. I fell in love with the place right away!

The romance withered in a couple of hours, with the realisation that there was no power and no sanitation, in the otherwise lovely home of a farmer, situated by the earthen embankment of the river Datta. Without much delay, I began making mental notes of my observations in mingling registers. I had to test my questionnaire in the field and began with my requests for interviews. The natives were welcoming, but talking about trauma was hard! There were several interludes of silences and tears during the interviews.

The first jolt came with the news that a seven-year-old child had hung himself from the mangrove branches on the edge of the village – all this while I was talking to the child’s father about the cyclone and his wife’s work in Kolkata. After the cyclone, with dwindling returns from farming and fishing, many women have been leaving the islands to work as maids in the nearby towns and cities to meet the demands of the household incomes.  I took a deep breath to find the resolve to finish the interview. I found no sleep that night. I decided to leave the village the next day. As I stepped onto the boat, I saw the dead body of a young girl from the next village wrapped in blue tarpaulin. Two deaths in two days shook me to my core and very soon it all became unbearable.  The memories pierce my soul every time I recall the early days, The one thing I learnt was that it is important to face my own emotions in the field and not to discard them with dispassion.

Research is a very personal and intimate journey where you are often left all alone. We get used to conversations with ourselves. I had come to the islands to understand their households’ vulnerability to climate change and natural hazards – but vulnerability also took another new meaning in the weeks and years of my travels along the serpentine delta-scape. During the course of my fieldwork, I was several kilometres away from the city on the islands with no power, toilet or even a room with a door that I could feel safe in!

On the banks of river Datta – farmers hard at work in the paddy fields – usually rain-fed in the deltaic lands. PC- NP.

The deltas provide abundant riches in natural resources – fish, fodder, fuel – but this has been taken away from its people. The recent changes in seasonal climate and hazard such as cyclones and floods rob the indigenous people of their resources. During the last decade, the ecosystem services that people relied on are reducing at an alarming rate: one cannot fish in the rivers like before and cannot make the land toil for the same crops that grew earlier. What has changed in the ecosystem? What is driving this change to such a detrimental level? I was asking many complex questions. Through my investigation, I realised that we cannot simply isolate and blame one factor. We must engage in deep scientific investigations comprehensively to study the functioning of this social-ecological system: soil, air, water, flora, fauna, vegetations – and others – to make the interconnectedness more apparent. Any positive change in the lives of the marginalised communities in this beautiful mangrove ecosystem can only come with a thorough approach.

My research has shown that natural capital – the mangrove forest, soil, water, air – is seen by the Sundarban inhabitants as the most beneficial capital for the local households to strengthen resilience to climate change and to face extreme weather events in the future. When are we likely to listen to those who live this reality? I cannot underscore the importance of listening to indigenous communities for efforts in mangrove restoration in the Sundarbans- as ultimately they are a part of this ecosystem and identify problems and possible solutions better than someone who parachutes into their lives. There is a mention of a Conservation Strategy and Action Plan for Mangroves and a Restoration Strategy and Action Plan, for potential and/or degraded mangrove areas in the National Strategy and Action Plan (NSAP), through community involvement in planning for better management, restoration and conservation of mangroves, while also improving knowledge gaps to reduce pressure on the ecosystem. However, this has still not been woven into the current national legislations for protection and conservation of the forests and biodiversity, which continue to ignore local social and ecological systems in testing terrain and high vulnerability to natural hazards.

So where do we go from here? How can we make lives of the Sundarban islanders any better in the future?  The problem of livelihoods and ecosystem conservation in the Sundarbans is complex. It is a fragile system under pressure from increasing human population and other disturbances to the ecological system.  Based on my work in the area, I have suggested two possible measures: education linked to mangrove restoration and conservation, and giving the ownership of the forests to the communities for its management. This approach promises to take conservation of the mangrove forest in the future.

Neelambari Phalkey is a Human Geographer and a published photographer and filmmaker. Currently, she is an ESRC Fellow, School of Geography, Earth and Environmental Sciences, University of Birmingham. Her doctoral thesis from Queen’s University, Belfast focused on the spatial distribution of natural hazard related household vulnerabilities in the Sundarban delta, India. She obtained her Master’s degree in Sociology from the University of Mumbai and another in Environmental Sciences, Policy and Management from the University of Manchester.