Research scientist Saakshi Dhanekar opens up about working in the male-dominated world of sensors, and juggling research and other responsibilities. 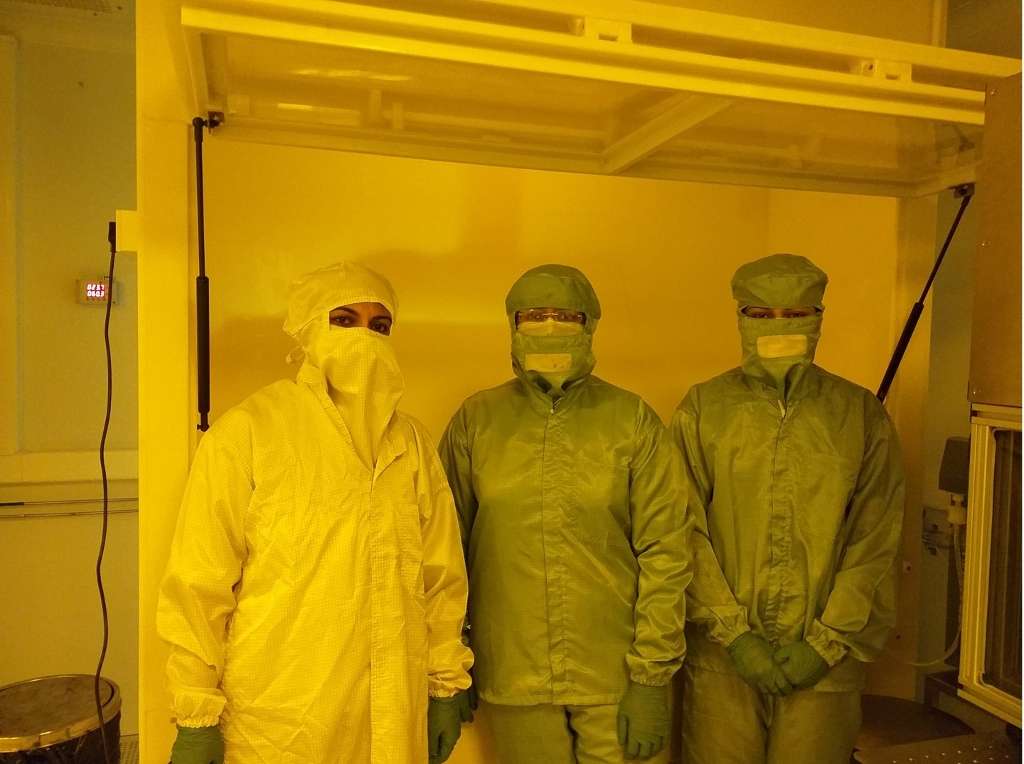 “Will be late – maybe an hour and a half more,” I informed my husband. It was 10.30 pm and I was still at work, at the Fabrication Lab (aka Fab Lab). I wore a cleanroom suit, gloves, mask and lab slippers while etching. The garb is cumbersome but crucial for maintaining a perfectly clean room. Every time I received a call from home or from one of my students, I would have to step out into our lab’s semi-clean room, where mobiles are allowed. This would add not only a delay to the process of etching but also to my paranoia of carrying dust particles back to my bench despite the air shower. A fab lab can make just about anything, most commonly, computer chips. It typically has vacuum systems to maintain airflow, uber clean benches holding up big machines that help in processes such as deposition, patterning and etching to produce patterns on materials. A fabrication process is often tedious and requires patience, perseverance and concentration. I need to be on my feet day-in and day-out.

Research for me, and for many before me, has been a way to contribute to the world through knowledge and inventions; but it was a difficult mountain to climb. During my master’s degree, I came across equipment in research labs that could make patterns on silicon wafers in the nano- and micro- scale. These types of equipment intrigued me, and a few clicks later I was introduced to the world of sensors. With applications in air and water quality monitoring, healthcare, agriculture and more, sensors can be found everywhere! When I made my first sensor successfully and tested it, I felt a sense of fulfilment. Any sensor you make yourself is like your baby. It will be completely different each time, depending on how you make and maintain it.

Just like one remembers everything about their first child, I can never forget my first sensor. At IIT Delhi, I was working on the development of sensors for the detection of bacteria and alcohol. A silicon wafer was used as a substrate and deposited with different metal oxides. A single fabrication process can take from several days to weeks, and sometimes, a few months. Currently, we are working to develop an indigenous alcohol breath analyser to be used primarily in India. The sensor needs to be sensitive, accurate, stable, affordable, portable and user-friendly. Another project’s objectives involve the use of metal oxide materials based sensors for breast cancer detection. Most of my research has immediate real-life applications.

Early days as a student and then as a teacher, were extremely tough. Ideas and plans frequently failed and led to self-doubt. It didn’t help that choosing research met with only partial support from my family. It was contingent on the fact that I stay in the same city. My family hailed from a small city and wanted me to get married right after my master’s. I could manage to push it for three more years, but finally got married during the final year of my PhD studies. I feared having to put my work and career dreams on the backfoot and focus on my spouse’s career, home and family. But I am grateful that my husband not only supported me during my PhD but also encouraged me to spend more time in the lab. We shifted base closer to the university, which allowed me to spend a few extra hours every day at the lab.

While I was working at Amity University as an Assistant Professor, I found out about the INSPIRE Faculty scheme by the Ministry of Science and Technology. The selection process was stringent. There were two rounds of assessment by the Indian National Science Academy (INSA) committee: one on the basis of a proposal and second a presentation. Post selection, one had to look for a lab/institute to host their research. I presented my project at many institutes and universities in Delhi (as leaving the city was not a possibility). I was greatly excited to join the Microelectronics laboratory in Centre for Applied Research in Electronics (CARE) at IIT Delhi. This meant a lot to me because this centre had fabrication labs with indigenous equipment where I could make more metal babies (sensors). The ratio of women to men in the centre was low – about 1:10 at the time. One question I had to face a lot was “How much time will you be able to spend in the lab?” I took it as a challenge and often worked late into the night and on weekends to satisfy deadlines. In addition to my project requirements, I also explored many options in micro- and nano-electronics area.

I gave birth to a baby boy (not a sensor this time!) after two-and-a-half years into the programme, another major milestone! Below, I have listed some scenarios that I learnt to navigate while working in a lab as I delivered more sensor babies using hefty and noisy machines.

Academia allows for freedom in work hours, owing to which, I would often begin my experiments early in the morning. Working with the equipment sometimes required some heavy lifting. For example, after I figured out which of the parts was causing an error and opened up the part, I would need help to lift it. I learnt to unabashedly ask for help from labmates, attendants and technicians – anyone who could help me fix it.

Strict deadlines often meant running the equipment night and day. I used to stay on campus at IIT so the commute was not a problem. However, there were still responsibilities such as keeping the refrigerator and the car’s fuel tank well-stocked, other household chores and, of course, looking after my child. These were full-time commitments, but my husband would volunteer to take up some of these tasks every day. To achieve success in research, one must choose their husband wisely!

I remember how while pregnant, I was expected to have a certain amount of water every two hours. Added to this was the constant pressure on my bladder added by the baby. This can be a tricky situation for a fabrication lab researcher because to maintain sterility, we have to wear a lab coat, gloves, mask and special slippers. How am I supposed to change my dress and slippers every hour to the washroom! I wondered. Moreover, this was during the peak of my pregnancy and I was mentoring nine MTech students! Since I was a temporary faculty through a new scheme, IIT had no rules laid out for me. I was advised to go on maternity leave and come back when fine. Even though I had submitted several leave applications, I never heard back from any administrative officials. Since my project would run only when I am there, I went back to work after just a month-and-a-half after delivery, but for the first seven months, I had to visit home every four-to-six hours to feed the baby. It was a challenging time, but my spouse supported me through the sleepless nights. This was the time I learnt to delegate my responsibilities efficiently. I taught my students to do the work for the first month and then challenged them to do it themselves or with my other colleagues so that the work does not stop.

Performing a patterning process on many devices takes hours of running around. Even during my period, I have to put in the same amount of physical effort, as the commitment to deadlines takes priority over the physical pain of cramps and related discomfort. I mentally re-assure myself – “it as a biological process and I should not let it come in the way of performing my work.”

Leaving my baby behind

As my research grew, I was expected to travel and meet people across the globe to discuss my work. I was lucky to have projects that allowed me to have collaborators across the world. This required immense support from my family, as they looked after my baby during these times. I could only see him on Skype every alternate day and I wept before going to sleep, especially when he fell ill twice during the time. I knew he was well taken care of, but felt guilty nevertheless.

By the time my son turned two, it became difficult for my old parents and in-laws to continue with full-time childcare. My husband, a city planner, would travel out of town very often. For me, the only option was a dependable daycare. Our campus did not have a daycare then, so we looked for options outside. Initially, it was tough for both mom and son, but we adapted and excelled! Still, the hard truth is that as a working mother, I always live in guilt.

Today, I am in a new centre, trying to make a mark again. I have a project running in the incubation unit of IIT Delhi to venture into entrepreneurship. I wish that one day I am able to support enthusiastic and dedicated women researchers, especially in male-dominated fabrication labs, so that a chain of women supporting women keeps going. I feel that the chain has begun for me with my first PhD student, a woman! And I’m also a member of Indian Women Scientists’ Association 🙂

Saakshi Dhanekar is currently a research scientist at IIT Delhi.

3 responses to "Backstage secrets from the fabrication lab"

Dr. Sakshi many congrats on your inspiring journey 🙂

Wow. Simple, straightforward and to the point. The machinary might have been heavy but your writing surely isn’t.

Pleasure to have read your first hand account. I am sure it will be inspiring for the future crop of researchers and scientists who are about to step into your field.

Well done and keep them coming!

Dear Dr Sakshi,I have seen you over a long period, always with Prof Sudhir Chandra and I know you can do it.I wish the system shall be more flexible and adaptive.I have keenly observed your pragmatic approach in highly academic environment.You had to dirty your hands to work in clean room.I wish you a great carrier ahead.Dr VK Suri,BARC,Convenor-DAE-Micro-Nanotchnology Steering Group.