Spurred on by a Twitter challenge, this ecologist-educator lists her favourite and little-known spiders in the rainforests of India’s Western Ghats. Enjoy this photo-listicle! 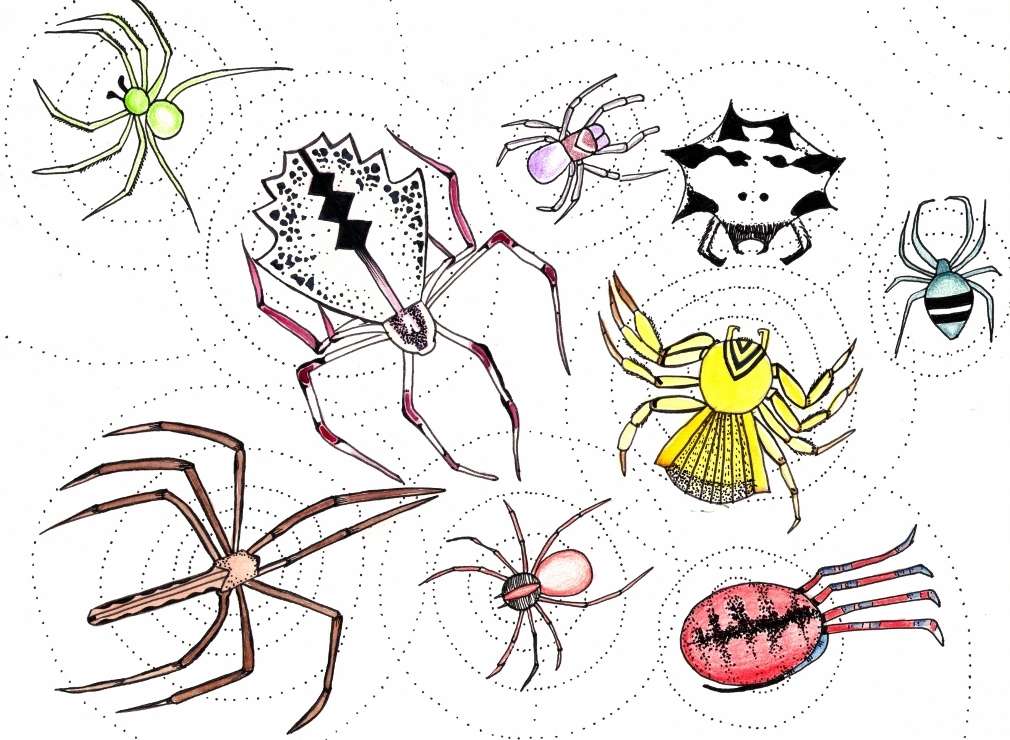 This post came about after a rather flippant and cheeky comment by me on Twitter to an article in The Guardian listing the “world’s most beautiful spiders”. While it was nice to see at least one Indian spider on this list, I had posted that I could think of many more deserving species. Little did I realise that the hawk-eyed and supremely enthusiastic folk at thelifeofscience.com would call me out. The next thing I knew, I was politely challenged to write the talk, as it were!

So, here is a listing of some of the more fascinating spiders I have come across in the lush rainforests of the Western Ghats in India almost a decade ago. These images and the associated research were part of a project to identify and document spiders as an indicator species for the ongoing work of rainforest restoration in the Valparai plateau in Tamil Nadu. 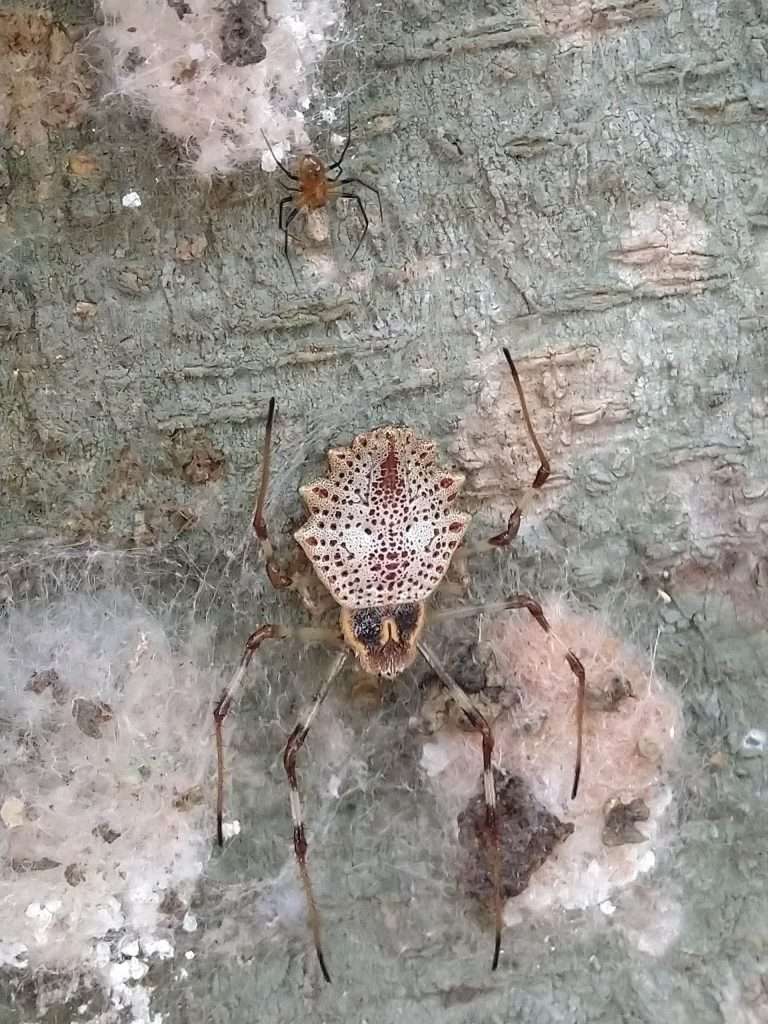 Herennia – male (above) and female, captured by Vena Kapoor

This species can be spotted not only in pristine forests, but also in relatively undisturbed pockets of greenery on campuses like Indian Institute of Science and the Agriculture University in Bengaluru. Found on tree trunks and sometimes on walls of abandoned human habitation, these spiders never fail to impress.

Even the mildly arachnophobic gush when they see this really lovely looking spider! It helps, of course, that this species has groovy grooves, notches and splotches of colours. One can also spot the rather insignificant – both in size and colour – looking male (compared to her of course) lurking around if they are both ready to mate. They also build a beautiful though cryptic elongated orb-shaped web against tree barks, and the spider sits in the middle of this web.

This is my current favourite. A striking feature of the Portia group of spiders is the “fringe” of hairs just below their eight eyes and pedipalps – the antennae of the spider world. These non-web building, hunting and stalking spiders arguably have an advantage over their famous web-building spider counterparts. The latter group typically wait around for their prey to come by. The repertoire of hunting techniques of the former group include pursuit, stalking and crouching. The Portia group specialises in hunting and feeding on other spiders!

You will soon realise the appropriateness of the name for this species. Possibly to blend in and catch her spider prey, she resembles a mass of dried-up debris! Web-building spiders have poor eyesight, so looking like dried debris might help the Portia blend into the web it visits. Research has shown that these spiders exhibit remarkably intelligent hunting behaviours and a repertoire of tactics to capture various species of spiders. For example, to capture a web-building spider, the Portia resorts to mimicking the vibrations/movements of a struggling insect or a potential mate. When the host spider comes to investigate, it is promptly captured by the Portia. 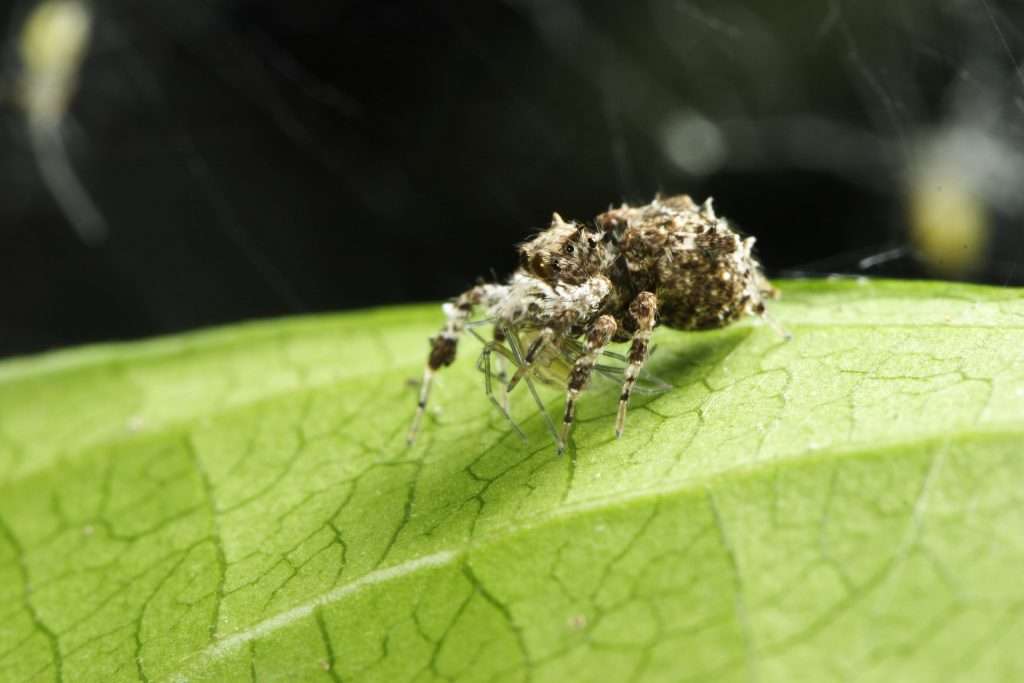 I’ll be stating the obvious if I go into how the crab spider got its common name. Another delightful group of spiders, they are typically identified by their much longer and often stouter first pair of legs and the way they position their legs. 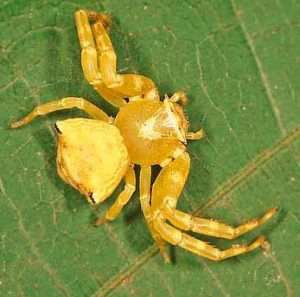 They often blend into the surface they hunt on, whether it’s on a forest floor or on a blade of grass. Even open flower heads will sometimes host a lurking beautifully camouflaged crab spider. They fall under the category of sit-and-wait hunting spiders; exhibiting almost a zen-like attitude.

Many of the crab spiders I had seen were colourful, stout and pretty things, like the yellow Thomisus species here (on the left/below).

My impression of crab spiders and their looks was challenged when, one particularly hot afternoon, while sampling in one of the coffee estates in Valparai, I came across a crab spider that didn’t look like anything I expected! I knew it was from the crab spider family because of other characteristics and from its eye arrangement.

Spiders can often be classified into their families by the way their eyes are arranged. Being a non-collector (much to the annoyance of some of my taxonomist friends) we took a picture, aw-ed and aah-ed over it for a while and left, never to come across it again. Is it new to science? Is it extremely rare? These are the questions we will continue to ask until someone spots it again and decides to investigate more! 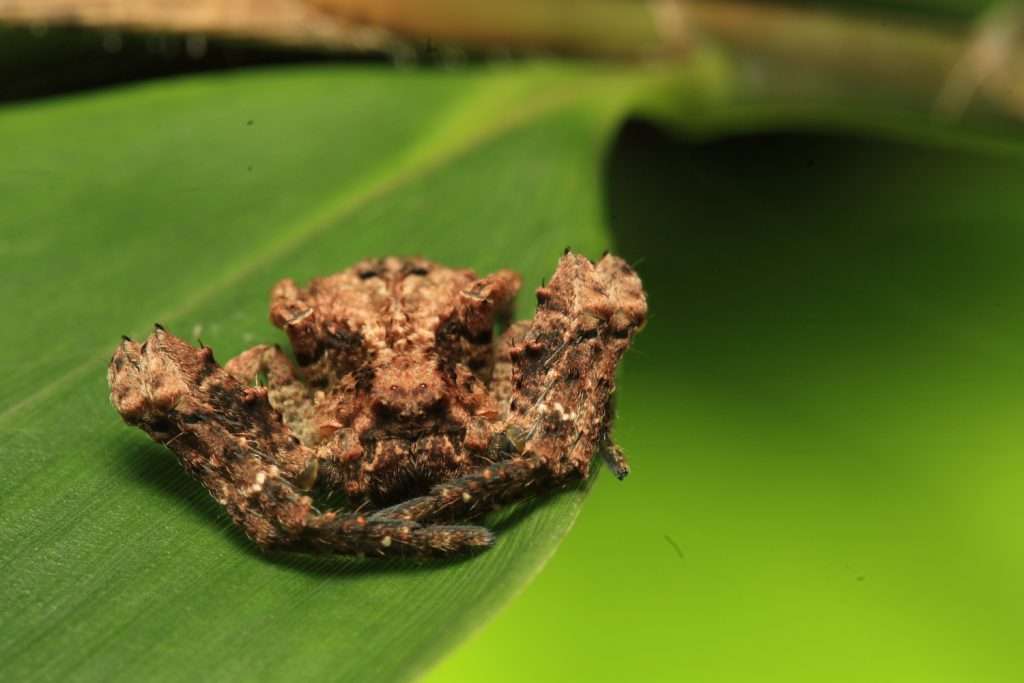 A suspended leaf in the middle of her beautiful orb-web shaped web structure gives our Acusilas a retreat to hide from predators, protect her from the vagaries of the weather in a rainforest and to bring up her next generation of babies, who will hopefully grow up in a less pesticide-laden world. I found this female with her first two pairs of legs sticking out of her leaf retreat and when I went to look a bit more closely, was lucky to be treated to the sight of hundreds of her spiderlings as well. 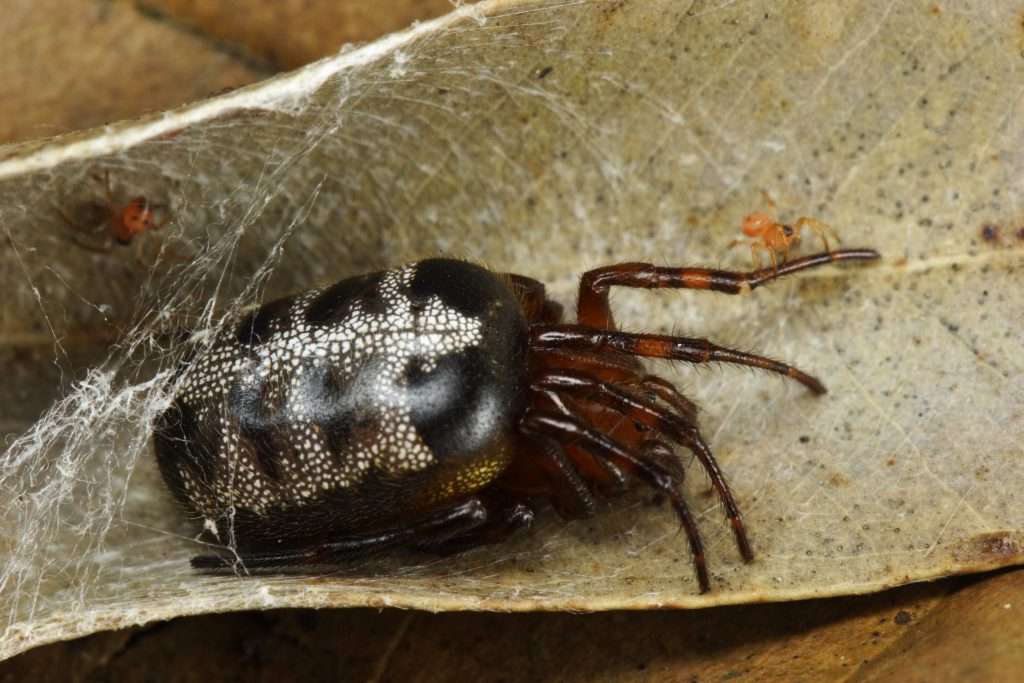 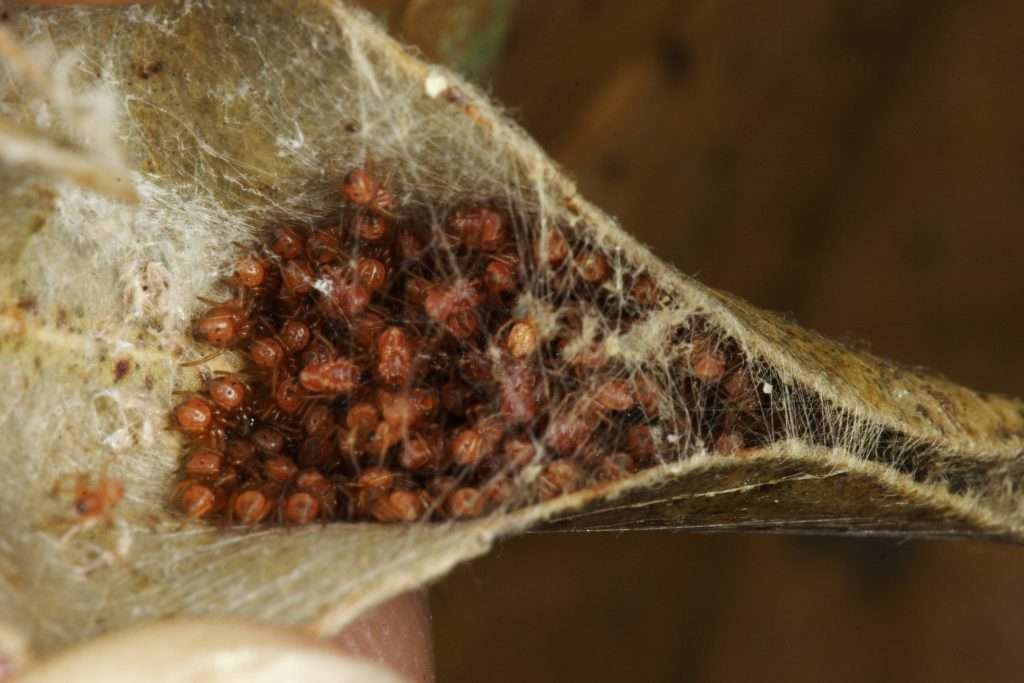 The Deinopis (Ogre faced net-casting spiders) – mysterious, dark wide-eyed and casting a spell on you

For the longest time, I thought that this spider was an urban legend. Books (these were the pre-internet days) would tease me with images, descriptions and the bizarre habits of the net-casting spider. One afternoon, while caught in a sudden downpour with some very hungry and therefore irritated photographers, I spotted the urban legend while navigating through some thorny vegetation. 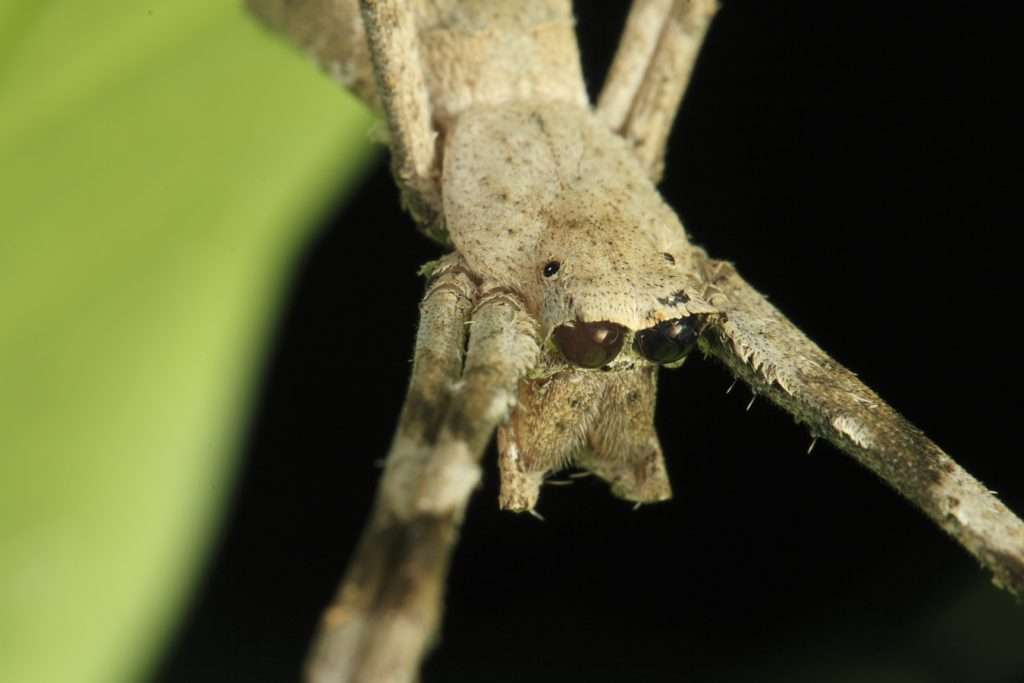 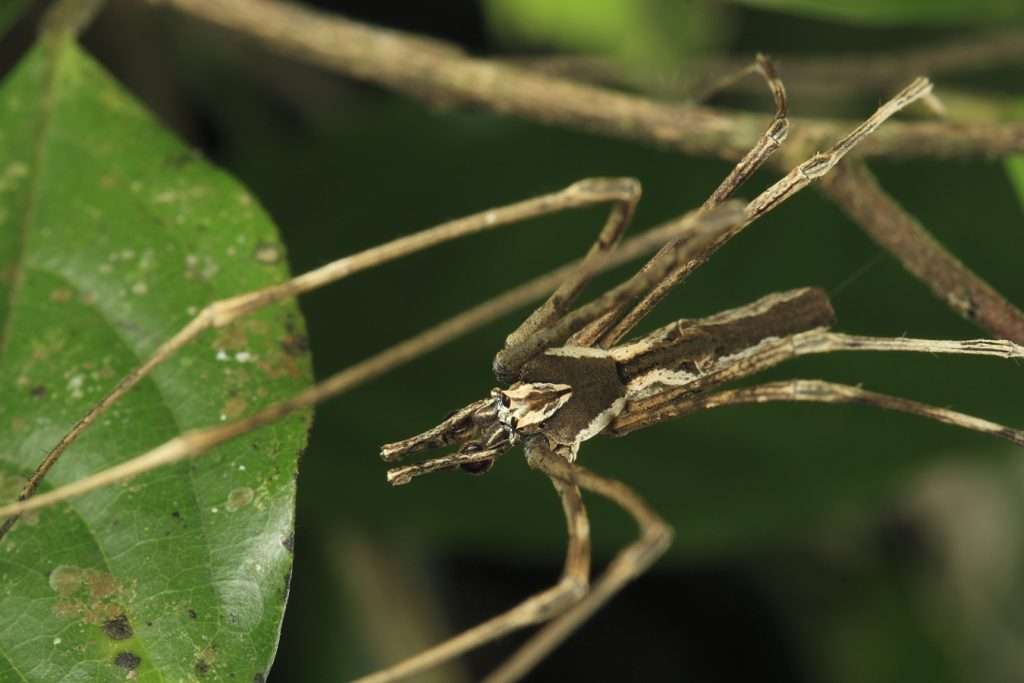 Many years later I wrote a little story about this incident. This spotting was particularly serendipitous because this species is nocturnal in habit and builds its net-like web only at nightfall. When a potential prey appears the spider stretches its silken net to two or three times its relaxed size and then “nets” this on the unsuspecting victim.

The rest of the time as you can see from the images the Deinopis looks like long dry twigs on a shrub. Also known as ogre-faced spiders (I christened it the Darth Vader spider) one pair of their 8 eyes is unusually large and prominent and they have excellent night vision.

Vena Kapoor works with the Education and Public Engagement Programme at Nature Conservation Foundation in Bengaluru. She is interested in ecology, nature education research and outreach, looking for and documenting spiders and other 6 and 8 legged creatures.