For years, astronomers wondered whether the Sun is a special star - a star sans superflares. All that changed earlier this year, thanks to a meteorite called Efremovka and some neat detective work from a group of scientists including Kuljeet Kaur Marhas from PRL, Ahmedabad. 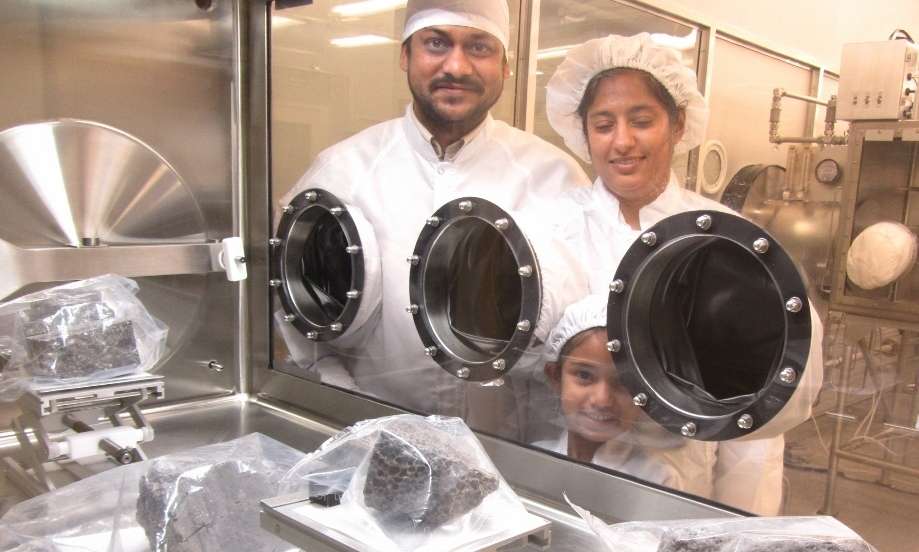 Kuljeet, Ritesh and their daughter, Esha, stand next to an exhibit of the Moon rocks which came back with the Apollo 15 and Apollo 16 mission to the Moon in 1970s, at the NASA  Lyndon Johnson Space Center, Houston (2015).

By counting the number of radiogenic Lithium 7 ( 7Li ) radioisotopes in a meteorite sample, Kuljeet Kaur Marhas – a planetary scientist at Physical Research Laboratory, Ahmedabad previously profiled on TLoS, provided evidence of superflares on the Sun – solar flares a million times stronger than we have ever known before.

Looking for evidence of past solar flares was no easy task. Kuljeet shared with TLoS: “These measurements are extremely difficult and the count rates for 7Li is pretty low, which adds to errors. Very rapid diffusion of Li also poses problems in interpretations. So one has to be very careful with corrections, as additional cosmogenic corrections also have to be applied while making the calculations.” Their findings are published here.

But first, let’s take a look at how solar astronomy arrived at this point.

On March 10, 1989, solar astronomers observed an intense brightening on the Sun followed by a massive explosion that hurled a billion tonnes of hot ionised gas into space. These were tell-tale signs of a solar flare, a magnetised plasma storm that rushes out of the Sun at speeds of thousands of kilometres per second.  A few days later on March 13, 1989, the Quebec power grid tripped, blanketing large parts of Canada in darkness and shutting down the Montreal metro network. Out in space, satellites started malfunctioning, radio communications broke down and radars got jammed. Spectacular auroras – which are normally confined to the polar region – lit up the night sky in countries situated much further down south. The space storm had hit home – planet Earth was right on its path.

The energy released in a solar flare far exceeds that of a billion nuclear explosions. These storms can have devastating consequences for satellites in orbit, disrupting space-based technologies such as GPS, mobile and satellite TV networks, and impacting air-traffic on polar routes. Solar flares originate from strongly magnetised regions on the Sun’s surface known as sunspots, whose overlying magnetic fields can sometimes tangle up and explode creating a storm. Human beings started observing and counting sunspots from the early 17th century soon after the invention of the telescope. We now know that the number of sunspots increases and decreases periodically over an 11-year sunspot cycle. While there are multiple small and large flares on the Sun when the number of sunspots is large, the really strong ones such as the one in 1989 occur only a few times during the course of a sunspot cycle.

Direct satellite-based observations of solar flares exist only over the last two solar cycles. We know very little about solar flares and there is a lot more to be discovered about this mind-boggling explosions. A solar flare has never caused large scale havoc on our civilization, but its potential to do so is feared. In their attempt to understand these flares, scientists are asking questions like: Are even stronger magnetic storms or superflares possible? Or were the solar flares much bigger in the early years of the Sun?

The answer is yes, at least from the theoretical perspective! The magnetic cycle of the Sun draws its energy from the rotating plasma material inside the Sun and it is known that the faster a star rotates, the stronger is its magnetic activity output. Sun-like stars are born with faster rotation but slow down with age because outward-flowing plasma winds draw out angular momentum from stars, in effect reducing their rate of rotation over billions of years. So it is indeed possible that the much faster rotating young Sun and its extreme magnetic fields produced superflares much stronger than the present day Sun. But is there any evidence to prove that superflares occurred on the Sun when it was much younger, at a time when human beings didn’t even exist?

An indirect answer came in 2005 from an international team of scientists led by Scott Wolk of Harvard Smithsonian Center for Astrophysics. Based on NASA’s Chandra X-ray Observatory data of flares from young Sun-like stars in the Orion Nebula, the team concluded that strong superflares occurred quite frequently in these young stars! This was followed by another significant study by a Japanese group in the year 2012. A team led by solar physicists Hiroyuki Maehara and Kazunari Shibata, including many undergraduate students at Kyoto University, analysed data from 83,000 stars observed by NASA’s Kepler space telescope. Their observations included a wide variety of stars which rotated relatively faster or slower than the Sun and some stars whose rotation speeds similar to that of the Sun.

Unexpectedly, however, they also found that stars which rotate just like the Sun can produce extreme flares as well, although much less frequently.

Since the rotation rate of a Sun-like star slows down with age, this sample of stars with diverse speeds ranging from fast to slow provides a window to the behaviour of a Sun-like star over time. Not surprisingly, they found that much faster rotating stars produced extreme superflares with energies 10,000 times stronger than the strongest flares observed on the present day Sun. Unexpectedly, however, they also found that stars which rotate just like the Sun can produce extreme flares as well, although much less frequently. This result was potentially exciting on the one hand and scary on the other because of the possible devastating impacts an extreme flare may have on our society. Nevertheless, we have not seen such an extreme superflare from the Sun in our lifetime.  Neither did an exhaustive analysis of past solar activity uncover conclusive evidence of past solar superflares. This apparent contradiction created a state of confusion; astronomers started wondering whether the Sun is a special star, more benign than its contemporaries – a star sans superflares.

All that changed earlier this year.

In March 2019 two Indian scientists, Ritesh Kumar Mishra and Kuljeet Kaur Marhas, working at  Ruprecht-Karl-Universitat Heidelberg and Physical Research Laboratory, Ahmedabad, respectively, published their analysis of a meteorite sample. Buried in their meteorite sample, they claim, was evidence of a massive superflare from the Sun when it was only about 500 million years old. Finally, evidence of a superflare from the Sun had been found.

The research work that led Kuljeet and Ritesh to this discovery of a solar superflare is a great piece of detective work combining experimental analysis, modelling and deductive reasoning based on studies of a meteorite called Efremovka.

The scientists’ claim this superflare occurred about 4.5 billion years ago when the solar system was in its infancy and the Sun was very, very young. How could one possibly unearth evidence of a superflare this ancient? The research work that led Kuljeet and Ritesh to this discovery of a solar superflare is a great piece of detective work combining experimental analysis, modelling and deductive reasoning based on studies of a meteorite called Efremovka. The Efremovka meteorite was found while tilling the field, in a region called Pavlodar in present-day Kazakhstan, in the year 1962 and with it, it brought hidden clues from the ancient solar system.

Processes related to the formation of the solar system, its chemical environment, and the early Sun’s activity all conspired together to determine the elemental composition of the first solid materials that formed in the solar system. These solid materials known as Calcium Aluminium-rich Inclusions lay encapsulated in the heart of space rocks, mostly to be found today in the asteroid belt. The Efremovka meteorite which managed to finds its way to Earth is a piece of one of these asteroids. Samples from this ancient space rock were used to make the discovery of superflares in Ahmedabad.

Utilising a sophisticated instrument called the NanoSIMS – a secondary ion mass spectrometer, Kuljeet and Ritesh analysed a sample of the Efremovka meteorite that was part of meteorite collection taken care of by the Physical Research Laboratory. The instrument uses a ray of energetic ions to bombard the sample and tease out abundances of radioactive isotopes of elements encapsulated in the meteorite. These radioisotopes are unstable combinations of neutrons and protons that naturally form through energetic processes in the Universe and then decay with a characteristic half-life into more stable atomic nuclei or other relatively more stable radioisotopes that survive for longer times.

Kuljeet and Ritesh found an unexpected overabundance of Lithium 7 isotope in their sample, some of which is produced from the decay of the very unstable Beryllium 7 isotope that is now extinct. Analysis of the abundance of Lithium 7 in their sample led the Indian team to deduce the original abundance of Beryllium 7 that existed 4.5 billion years ago when the Sun was just a half a million-year-old star. Although extremely energetic phenomena such as Supernova explosions can trigger the formation of similar radioisotopes such as Beryllium 10 over a long period of time, the very short half-life of Beryllium 7 of about 53 days led the authors to conclude this could only have formed by rapid, repeated doses of very high energy particles bombarding the ancient solar system. The team then calculated the flare energy necessary to produce the required amount of overabundance of the radioisotope observed in their sample. They inferred that the flares that occurred 4.5 billion years back in the ancient solar system had energies about ten thousand to a million times stronger than a typical present-day solar flare.

Evidence of superflares in the Sun had finally been found!

Life as we know it today evolved from primordial life forms. The earliest evidence of such life forms is about 3.7 billion years old. The possibility of the existence of superflares on the young Sun implies that throughout the early evolutionary history of life, storms from the Sun would have sustained an extreme environment bombarding Earth with a much larger flux of high energy radiation and particles. What impact could it have had on the synthesis of early lifeforms and building blocks of life such as RNAs and nucleic acids? Is it possible that superflares could occur even today on the Sun, a scenario that is suggested in the work of the Japanese group based on studies of other Sun-like stars? Are we living on a chance that our star, the Sun, has become uniquely benign and we shall not have to face the consequences of a present-day superflare? Space agencies such as NASA, European Space Agency and the Japanese Space Agency have multiple satellites in orbit observing flares from the Sun. These missions are on the one hand trying to understand the origin of flares and on the other hand, they are supporting early warning systems for space weather. ISRO, India’s national space agency plans to launch the Aditya-L1 satellite next year to add to the eyes observing the Sun’s activity. There is hope that we shall be able to understand and predict strong flares from the Sun and protect ourselves. There is hope that we shall one day figure out the intimate relationship that the living world on planet Earth shares with the star that is both a life-giver and a source of violent storms in space.

Author bio: Dibyendu Nandi is a professor at the Department of Physical Sciences and Center of Excellence in Space Sciences India, IISER Kolkata. The author is a solar astronomer not involved in this study.