Manidipa talks to us about teaching students to appreciate unpredictability in research, evaluation of scientific progress, and the fortune of having a spouse in the same field. 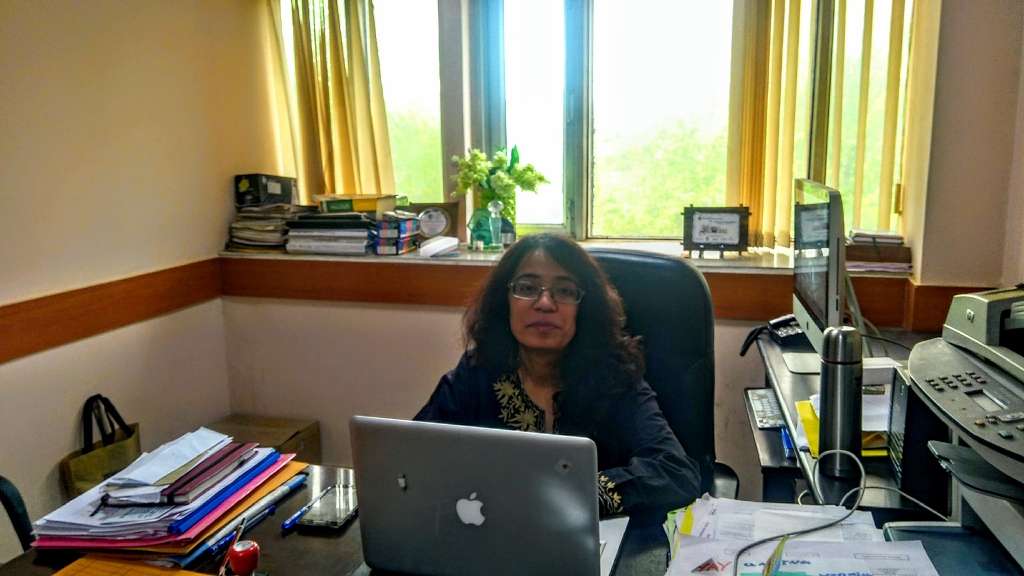 Manidipa believes she’s living the dream – she has a supportive home and great scientific freedom at the Kusuma School of Biosciences at IIT-Delhi. Having trained as a chemist, she became interested in studying the structural biology of host-pathogen interactions during her PhD. She recalls her first conversation with her postdoc supervisor, “He said, ‘Oh, you think it’s fascinating that bacteria can achieve so much with such a simple setup? I know of a virus that does everything with just one protein!’, and I thought, ‘Now, that’s fascinating!’ This is how she came to study the flock house virus. Made of 180 copies of the same protein, it is a symmetric icosahedron that gradually becomes asymmetrical, falling apart to release the genome as it infects the host cells.

WHERE? The Kusuma School of Biosciences, IIT- Delhi

Looking at her profile, one cannot easily classify her neatly into one of the boxes that many in Indian academia usually do. Is she a biochemist? A biophysicist, perhaps? She breaks a lot of barriers. She laughs and says: “In India, we love to label things. I always introduce myself as a virologist. The rest are just techniques!”

“I just want to answer questions about how viruses interact with host cells. How they behave. Can we engineer them to do other things?”

Speaking of her journey in science, she says, “My postdoc lab at the Scripps Research Institute was huge and incredibly heterogeneous. We had people who did cell biology, structural biology, crystallography, cryo-electron microscopy- everything!” (Cryo-EM won the 2014 Nobel in Chemistry, and Manidipa was one of the first to use the technique in India) “My mentor, Jack Johnson, never assigned projects. He said, ‘You work on this virus, but you figure out what you want to do.’ I had the opportunity to learn from everyone. What I learnt, I wanted to implement in my lab.”

And this is exactly what she did. Manidipa lives by and instils in her students the philosophy of nonlinear science. “Science is not linear. My students are here to become scientists, and they are supposed to fail sometimes. If I tell them ‘You do these experiments, and then you graduate’, I feel I have failed as a Principal Investigator. This means I haven’t been able to tell them that in science, you try out things – sometimes they are completely wild, and sometimes you fail. I cannot tell you what you will find at the end of it, because I don’t know. Science is fun because it’s rarely predictable.”

She recalls a colleague being worried that his daughter pursuing her PhD abroad wasn’t publishing as often as he’d hoped. Manidipa reassured him it was completely normal. “In IIT, we have to write grants [that require publications] to raise funds, as opposed to most research institutes providing some ‘institutional funding’ to their scientists. I’m very proud of everything we’ve published, we’ve taken the time to figure out exactly what we’re doing. We got some interesting results- some of them matched our theory, some of them didn’t, but that’s OK!” she laughs. “Different people work in different ways. It’s not like publishing a lot is bad, it’s very good! But I’m comfortable this way.”

How are Indian and American academia different? “In my understanding, Indian academia lacks the critical mass required to evaluate projects and papers on their merit rather than the impact factor or number of publications. There’s a slight a restrictive feeling, in terms of openness and willingness to share techniques and reagents. But now there’s a huge influx of people trained abroad coming back, and many new institutes coming up. I’m sure it’ll happen. It’s just going to take some time.”

There are two factors paramount in her venturing into a new project- her students must be interested in it, and the lab should have some technical expertise in the field. This is illustrated by how her group started working on the two projects she started at IIT-D. “The reason I got interested in the hepatitis A virus (HAV) is that it is a non-enveloped virus, similar to the flock house virus (FHV).” Due to the lack of a viral envelope, these viruses cannot carry out membrane fusion, the process by which most viruses infect a cell. So how do they enter cells? “The FHV releases a small molecule called the gamma peptide at specific stages during virus entry that breaks open cell membranes and lets the virus in. Interestingly, we discovered HAV didn’t have a known component to rupture cell membranes in this way.” Her group then used biochemistry, biophysics, and reverse genetics to prove that there was indeed a peptide that is essential for HAV infection.

As she goes further into the details of her other project starring the Chikungunya Virus (CGV), it becomes apparent why her students are her fans – because she is a fan of theirs, too. At times, even when she knows that some things are impossible to do while staying within the lab budget, she is willing to take an informed gamble. “In the Chikungunya virus (CGV), the membrane penetrating component had already been identified. However, its job was to help the virus exit the host cell.  If that peptide is removed, the virus looks like it hasn’t budded out completely, and is incapable of infection. It is very difficult to make this peptide since, being a membrane interacting protein, it is hydrophobic. My student [who worked on this] said he wanted to give it a try. I knew he had an amazing academic mind but I asked him if he was sure – it could take 4 out of the five years [of his PhD] to make the protein. The risk paid off. He was able to make it and characterise it biochemically. I was just the cheerleader!”

Given the abysmal gender ratios at IITs, was she ever treated differently because of her gender? “If anything, I was treated better, never worse! I do recognise that many people have not had that good fortune. On any committee I am in, I’m lucky to see another woman! I am not in favour of increasing the number of women at the faculty level and beyond by force [such as quota systems]. I think it’s going to naturally happen in the next 5-10 years. This round of interviews for hiring faculty at the KSBS, we saw so many good women candidates! We HAD to take some of them, but based on merit, not their gender.”

She believes it is societal issues, and not a lack of opportunities, that prevent more women from climbing the top rungs of science. For many in academia, who consider their projects as their “babies”, succeeding takes strong backing from friends, family, and colleagues. Manidipa acknowledges that she has been luckier than most in this aspect. Having her husband and late father help with childcare, and the daycare facility at IIT-D for children aged 8 or below, helped tremendously.

In fact, she says, the daycare is a great example. “In IIT, we started a daycare centre. We wanted to provide this facility to PhD students, postdocs, and faculty of both genders.” She says, the first question two of her male colleagues asked before joining was, “Do you have a daycare?”

Having said that, she concedes that a mother is expected to be heavily involved in raising a child. It is difficult for a woman scientist anywhere in the world to prioritise her child over her work, where her PhD students are also dependent on her.  “In science, there is never a good time to be a mother.” And she would know, she had her daughter in her first year as faculty and returned to work four weeks after having a C-section. “What we have recognised in IIT-D is that [to encourage more women scientists at any stage in their careers,] the children must be well cared for. If we want to encourage more PhD students to continue in academia, they need a lot more support than our society is able to offer at this point in time.”

“In science, there is never a good time to be a mother.”

She explained how difficult it can be to start a family when you’re starting out in science in the first place. “My husband and I did our Masters together at Calcutta University, where we met.” She opted to do her PhD at UC San Diego, and they reunited when her husband joined a postdoc at another lab in the same institution. “We have been very careful to never be in the same lab, barring one or two minor collaborations. If both people are doing similar work, one person may be eclipsed by the other, and that may create some issues.”

Finding a position and getting tenured had its own set of difficulties, she said, recollecting a visit to India where, within one week, she interviewed at five institutes in four cities, all while jet lagged.

Manidipa finds the division of labour is a significant silver lining in being married to an academician. “I feel that I can communicate my problems and my schedule to him better. Academic jobs are relatively flexible; the work may be more, but we can opt to work early or late at night. When there is a time crunch due to grant submissions, gradings, etc. there’s no communication gap.”

From a child that dreamt of being a doctor, to a virologist who loves teaching as much as research, Manidipa Banerjee unquestionably has come a long way. Her father wanted her to become a chemical engineer, which she refused to do. The irony of having now joined an institute known for engineering, and engineering viruses at the nano-scale, is not lost on her.

Author bio: Bornika likes to write. She also loves to science. Armed with an M.S. in Molecular Biology and Genetics, she hopes to pursue further studies in developmental biology soon.