The founder-principal of a women’s college in Delhi shares her journey of self-discovery, career choices, and all that went behind starting a college for the applied sciences. 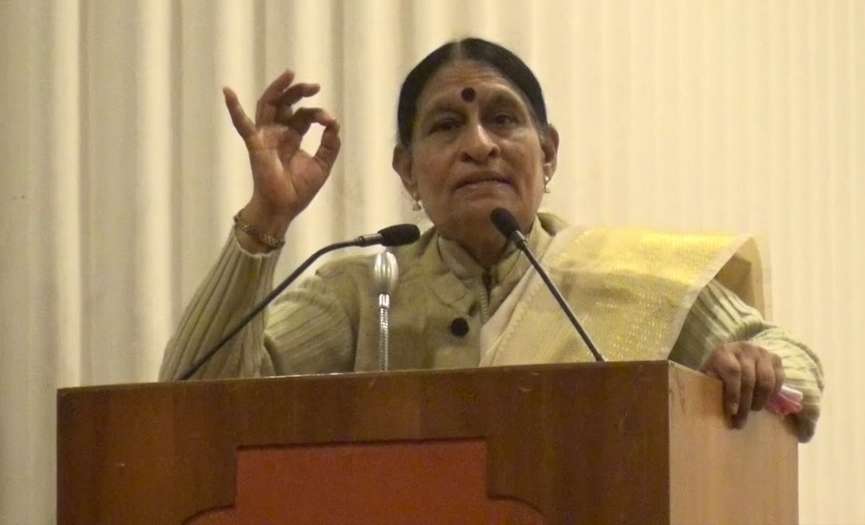 WHERE? Shaheed Rajguru College of Applied Sciences for Women, University of Delhi

I enter the towering apartment complex on a bright Sunday morning, anxious and a little stressed to find the right house. Fortunately, the security guard seems familiar with “Dr Lakshmi” and promptly points to the correct building. Soon enough, I am welcomed with the same enthusiastic voice I remember from nearly six years ago, the last time I’d met S. Lakshmi Devi. I note that she still wears a coin-sized bindi and a well-draped sari, as was characteristic of her during my undergraduate days.

She invites me in.

The room is packed with medals and trophies, the walls covered with paintings, a piano stands on one end and an open kitchen on the other. I watch as she starts singing to herself and gets busy in the kitchen. Within minutes, I’m served adai dosa, a traditional Tamilian dish, and we settle to talk.

“Freedom to teach gives the freedom to think”, says Lakshmi, who has been an educationist for the past 47 years and the founder-principal of Shaheed Rajguru College of Applied Sciences for Women, a part of University of Delhi. Love and passion for academia and teaching were imbibed in her from early on. “My mother studied only till the tenth standard. Still, she was innovative, creative, and inquisitive about things. She gave us her full support and took an active part in all our activities. My father always said, ‘Don’t be an IAS officer or anyone’s servant. Be a teacher, master of yourself and learner throughout life.’”

Her school played a major role in building confidence. Lakshmi believes that a major problem in our education system, especially for girls, is that they do not emerge confident. She has observed that girls are afraid of facing an audience and expressing their thoughts and beliefs. This must be worked on because when they become confident, they realise their dreams and know they can conquer the world. It was when she auditioned at the age of 10 for the role of Ram for a school play in her fourth standard, that Lakshmi became aware of her own confidence and clarity of expression. This encouraged her to take part in various recitation competitions, debates, and learn Rabindra Sangeet.

School teachers played a pivotal role in the development of her interest in biology. Lakshmi’s ninth standard biology teacher got an animal’s lungs from a butcher to demonstrate respiration by inflation and deflation. This piqued her curiosity towards biology as well as teaching. So, after her PhD, she taught plant physiology, cell biology, biochemistry and genetics at Shivaji College, Delhi. Wanting to be a role model and an inspiration for her students, Lakshmi emphasised that she never went unprepared for class. She committed all the hormone synthesis pathways to memory and never carried notes to class. A few years into her teaching career, an opportunity presented itself to her.

“In 1989,  the University’s Academic Committee asked me to start a college. I was hesitant. I was not an administrator but a teacher, and the joy I got from teaching, I never got from administration. But I decided to give it a try”. The first batch of students of Shaheed Rajguru College of Applied Sciences for Women joined in December 1989. They were offered three applied BSc courses: instrumentation, electronics, and food technology. The college operated out of just twelve rooms located in a building that was shared with Shaheed Sukhdev College of Business Studies. Lakshmi recalls that this was a time when not many understood what instrumentation was or how food technology was different from home science. She had to be the one to bridge this gap. In order to introduce more courses, the best use of space was made and corridors were converted into classrooms. Later, computer sciences and biomedical sciences were introduced in 2004 and 2005 respectively.

Lakshmi recognised early on that a focus on holistic learning and development is important, especially with school graduates. For this, it was crucial that students had practical training in order to develop the skills required to work. The industry, however, was also not ready to train applied science students; engineering students were strictly preferred. Applied science courses were new to them. Lakshmi had to convince managers to allow students from her college to be given hands-on training and learn practical skills for their future in the industry, for which, internships were facilitated by the college. Additionally, a mandatory eight-week industrial project was introduced for the final year students.

Even securing a summer internship was not a straightforward task for the students. Lakshmi recalls, “A pizza factory where BSc food technology students wanted to do a summer training did not allow female students to enter the premises. The female students had to apply for a (job) position just to enter inside and request the manager an internship. They were given the challenge to solve a problem with pizza bases which they solved by tweaking the recipe. Unfortunately, the team of predominantly male chefs refused to change the recipe and our students had to walk out. Today, all of them are well placed.” Watching her female students get jobs, stand on their own feet and become economically independent inspired Lakshmi to continue as the college’s administrative head along with teaching.

The next big challenge was to build a new college building. Everything needed to be done with the help of government agencies. The biggest problem was the kind of corruption highly prevalent in these agencies. Lakshmi also noted that she did not see even a single woman in these agencies. Every Saturday, she sat with ten men around her and recited a long list of things that were still pending. “It was hell to convince them. And still, they would find ways to do as they wished.” Interestingly, the architect chosen for the project was a reasonable woman and understood Lakshmi’s position well, and they managed to get everything in place. Thanks to these efforts, she feels that her college has the best possible infrastructure to support teaching and research. She proudly notes that it was is also accorded as a DBT Star College, under the Star College scheme of Department of Biotechnology, doubling the budget to improve science teaching by practical training. The success of the college inspired the Delhi government to open a college for boys, four years later named Bhaskaracharya College of Applied Sciences.

Lakshmi believes that applied science should always be supported by basic science. “The earlier syllabi earlier were excellent, with students being taught common, basic subjects in the first year and applied and specific subjects in the subsequent years. Today, the syllabi are diluted.” According to her, to have a holistic grasp of science, it is important that all students study physics, chemistry, biology, and mathematics – “even an electronics student should study biology so that they can understand and integrate their knowledge for solving problems in a different field,” she says.

After passing on the responsibilities of the college to the present principal Payal Mago, in 2015, Lakshmi now motivates students and teachers to have entrepreneurship cells in colleges as the director of the Centre for Entrepreneurship and Career Oriented Programs, University of Delhi. “The idea is to generate job providers and not job seekers.”

As I walked back from her apartment, I recalled the excitement and nervousness I felt before Lakshmi’s lectures on Mendelian Genetics. Her classes were never supported by powerpoint presentations, yet were highly interactive. The focus was to make students learn problem-solving. Rules for the class applied to all, including her – no one could come unprepared! I felt a renewed sense of respect for the lady whose teaching practices and leadership qualities have consistently inspired me.

8 responses to "From teacher to administrator: A founder-principal’s perspective"

Nice maam we miss u lot

Every word is so true…. whatever I m today is just because of mam….the confidence that rajguru college gave me nvr came before…..n today I also inspire my girls students to do best in their lives….like Lakshmi mam used to inspire us always and even today whenever I meet her I get to learn something new.. always a role model

She is an inspiration for all the ladies and even men out there. Each and every word written above are so true like a drop of clear water.
She ia the best

Yes she is the inspiration to us . I impliment her in all my work while doing my consultancy.

She is one of the best teachers in my life. Zill-e-Anam has put it very correctly that Lakshmi Mam always came prepared, without notes and her lectures used to be very interactive and interesting. We are lucky to have a teacher like you as all your students are confident, punctual and will keep imparting the same to the next generation 🙂

Thanks, everyone. Indeed it is a privilege for each one of us to have got a chance to be around her.