Adding women to Wikipedia: One article at a time

By Manpreet Kaur Jaswal and Srravya

Manpreet Kaur Jaswal is a Doctoral Research Candidate at IIIT-Bangalore. Other than being passionate about electronics, she enthusiastically looks forward to gaining experiences from all the technical and social opportunities at her disposal.

Srravya is a Masters’ student at IIIT- Bangalore and enjoys contributing to free and open source projects such as Wikipedia. In this blog, Manpreet and Srravya share their experience of participating in Wikipedia Edit-a-thons held on their campus.

The idea was to come together and contribute to Wikipedia, a freely editable online knowledge repository. Following the call for #VisibleWikiWomen 2019 by Whose Knowledge, the theme for this event was Women’s Histories, to help improve the Wikipedia articles relating to women. To us, this came across as an opportunity to bring the work and contributions of women that inspire us into the limelight. The idea of contributing to Wikipedia, everyone’s go-to site to get a quick gist of things, was fascinating. We were excited to participate in a global campaign to make women more visible. As novice contributors, who have dabbled in Wikipedia in the past, we registered for the event and eagerly looked forward to it.

A classmate asked Srravya, why write only about women? Why not men? Or just about anything? A perfectly valid question to raise. We turned to Wikipedia itself to find answers to the classmate’s question and checked if Wikipedia articles about men and women were any different. First, we went to India’s Minister of Defence Nirmala Sitharaman’s page and scrolled down to the references section on which the profiles are based. The Wikipedia page of our defence minister had eighteen references. Not bad, we thought. Next, we decided to check the page of our finance minister, Arun Jaitley. His page had forty-four references. A lot more than the references used to write Nirmala’s page.

We still gave him the benefit of the doubt and decided to check another woman politician’s page. We went to Sumitra Mahajan’s (the speaker of Lok Sabha, whose long political career is comparable to Arun Jaitley’s) page. There were nine references. We did a similar comparison between Donald Trump’s and Hillary Clinton’s pages; no prizes for guessing whose page had more references. A pattern emerged—that of gender disparity in Wikipedia articles. The articles of men and women of comparable stature were not otherwise comparable; women’s pages were not as detailed as that of men. The success and struggles of women were left unaddressed. Potential sources of inspiration and information to the world were missing.

For both of us, this year’s edit-a-thon was not our first. A similar Wikipedia edit-a-thon had been organized last year as well and we had participated in the event. The three-hour event was a thorough exercise in learning the steps to create an article—right from ascertaining whether an article already exists, collecting references to support a new article or an update. And finally, putting information together as per the Wikipedia guidelines—there are many based on Wikipedia’s 5 pillars and rules for making edits.

I created a page for Moumita Dutta, an ISRO scientist who was part of the Mars Orbiter Mission, at the first edit-a-thon. A few days later, when I checked the page again, I was pleasantly surprised to see that others had chipped in to improve and expand the article. As the page got more eyes and hands on it, it was also scrutinised closely. I got an alert just a day after the edit-a-thon that the article was contested for copyright issues and was suggested for deletion. However, a couple of contributors offered to improve the article by removing content under copyright and adding other details. This incident left an impression; the article was not just preserved, but also improved. This motivated me to return to this year’s edit-a-thon.

At the 2019 Edit-a-thon, we had an experienced contributor, Ananth, from the Wikipedia community to guide the session. He explained the process of content creation, what happens behind the scenes once we create an article, what are some common errors to avoid and so on. We learnt how to add info-boxes (box on the top-right of Wikipedia articles with structured summary) and images to an article.

Both of us learnt a lot about the women we wrote about. While adding content on Wikipedia, one can’t write/edit just about anything known about the subject. That is likely to be deleted by the Wikipedia community. Every detail needs to be referenced from reliable sources. This was a lot like writing a scientific research paper—by gathering references and ensuring the reliability of the information. As Srravya collected material for the articles, she read different news articles, interviews and even watched a couple of videos. I ended up exploring a lot of resources on the internet such as official websites, blogs and news aggregators that she had never visited before.

At both the events, we got in touch over email with some of the women we were writing about to request photographs for their Wikipedia pages. It felt nice to correspond with women we admired and, more so, as Wikipedia contributors!

Each one of us at the event was trying to ensure that our article size was at least 2048 bytes. Ananth had mentioned that articles which were smaller than this may end up being removed for providing too little information to warrant a separate page. As we strived to expand the articles we were working on, we added images or created additional sections to add descriptions. Each time somebody hit the magic number, we paused to celebrate as well as to exchange pro-tips to get there.

The event gave us a sense of contribution—that we were pitching in to a larger knowledge repository. At the event, we sat with a small but vibrant group of people, most of whom we barely knew. Yet, all of us chatted and worked together enthusiastically on that Saturday morning! Each of us chose to develop content about the women we personally found inspiring; women, who we thought, the world should know about. At the end of the day, we had created articles (some of them still work-in-progress) about a South Indian violinist, a vocalist, an ISRO scientist, and a science historian among others. As we wrapped up the event, we realised that no two articles we had worked on looked the same. We had all chosen personalities from different fields who varied in their educational background, profession and achievements. While the artists had sections about their performances, the historian had one about her book.

Towards the end of the event, all of us brainstormed themes for upcoming edit-a-thons. We hope to run monthly edit-a-thons with a variety of themes. Women are not the only people whose contributions are invisible online (and on Wikipedia). (In)visibility can be thought along other axes as well—occupations, castes, languages. In future events, I hope to learn more about Wikipedia and the different ways in which one could contribute to it. Next time around, Srravya hopes to polish her rusty fluency in Tamil to be able to contribute articles to the Tamil Wikipedia. At the end of the event, we also realised that Wikipedia is a world in itself. Both Srravya and I, hope to explore Wikipedia’s sister projects such as Wikiquote, Wikivoyage and Wikispecies—to enter newer avenues of learning, while also contributing to them.

This collaboration didn’t stop with the event. It continues online, as people discuss, discover and contribute to the articles created.

Manpreet wishes to thank Srravya for her contribution to the article. 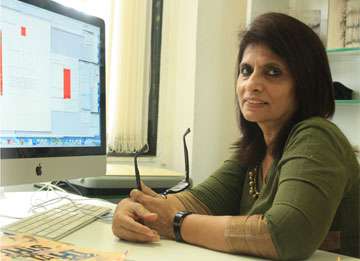 Nitty-Gritty of the Nation’s Psychology with Urmi