Anindita writes about her long-drawn struggle to get a permanent faculty position at IISER Kolkata. 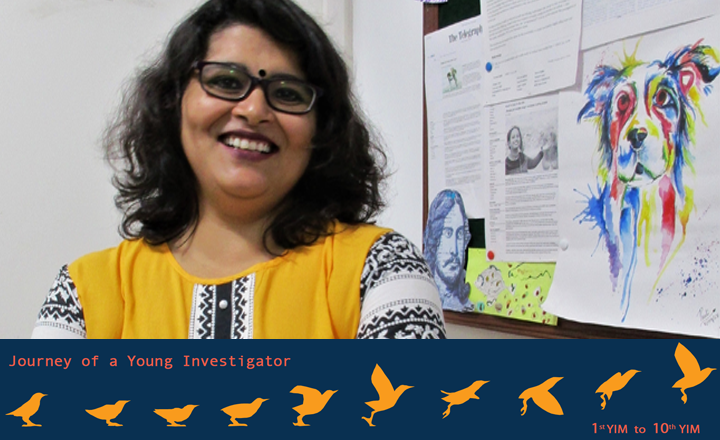 Featured Photo: Anindita Bhadra in her lab, also called the Dog Lab. On the right, a painting of a dog made by one of her students. (Photo by Arunita Banerjee)

Anindita Bhadra is an Associate Professor in the Department of Biological Science, IISER, Kolkata. She attended YIM 2015 as a YI. In this invited post she writes about her long-drawn struggle to get a permanent faculty position at her institute.

The first thesis from the lab is always special for a researcher, just like the first child is to a parent. When my student defended her thesis a couple of days back and the external examiner had only words of praise for the work, the feeling of fulfilment was very special. Listening to Manabi making her presentation, looking at the perfect graphs that spoke volumes, I was thinking of the time when we were struggling to find a scrap of ground to stand on.

In June 2009, I joined IISER Kolkata as an IISER Fellow – a contractual faculty position used by the early IISERs in order to hire young scientists who didn’t have the required three years of post-PhD experience, but “showed promise”. Life had been good to me during my PhD and the short postdoctoral stint in Raghavendra Gadagkar’s lab at IISc. I had had a smooth transition from MSc to PhD, PhD to a Research Associate and RA to a faculty position, without a day’s break in my career. I had been promised a regular position in “about one year” from the time of joining, and I made the mistake of taking this statement at face value. I was naïve and young, and I have the bad habit of seeing the glass always a little more than half filled. My husband quit his career in industrial research to return to the academia after five years, and we left the city that we had begun to call home, for the city that had always been home. We left the secured shelter of a sedate and experienced IISc for the youthful IISER, with dreams of being part of building an institution and hopes of exploring the theatre scene of Bengal.

I had my research plan all chalked out, and quickly got down to working on a funding proposal. I was happy to have substantial teaching responsibilities, including a full undergraduate course, and the first semester flew by without any hitches. The students were great, we had nice colleagues, and the campus was just developing. We had issues with space and infrastructure, but most of us were young and enthusiastic, and we took it all in our stride. By the end of the semester, I had a student who joined for a year as an institute funded project fellow, with a promise of a PhD fellowship if she performed well. My first grant soon followed, and my lab was all set to work. Within a year, I had two project students and we started getting good data on my model system, the free-ranging dogs. However, as my research started to take shape, my career path became tortuous.

I realized that in order to find stable ground, simply working hard wasn’t enough. I was a woman, and I had to handle flirtatious comments, politely reject invitations to dinners, lightly step over compliments on how I dressed, and eventually all this summed up to being ticked off from the good books of the Director. The ambience of camaraderie that had once existed on campus was changing fast, making way for an oppressive autocracy, and the likes of us, who protested were blacklisted very soon. We were a handful against the majority of neutral people and the ones who sidled up to authority. The negativity reached its zenith in September 2011, when four of us, all women IISER Fellows, were handed over letters of termination stating MHRD guidelines, after a set of completely farcical interviews. Suddenly, I was about to be jobless in the new year. I was 7 months pregnant, and had a lab running on a CSIR funded project. After a month of sheer mental torture, the tables turned to some extent. The Director did not get the second term he was hoping for, the interim Director did not take long to revoke the termination orders. Apparently, no directive from MHRD regarding the discontinuation of contractual positions existed!

The new Director joined in February 2012, and we hoped that the institute will move forward. Everything had stagnated, work on our new campus had stalled due to various issues, we had no institutional support for research, no space for accommodating new faculty members and students, our students were crammed in the old hostels, and we were expanding every year, as per the MHRD directive. It was a period of crisis. Some things did move forward for the institute in the new regime, but the environment did not improve. Personally, I was at a critical stage, with my original contract for three years expiring in the middle of June. It turned out that the founding Director has hired many more faculty than the number of available posts, and so all hiring had been stalled, until the next sanction from the Ministry. We were also informed that contractual staff could not be regularised until new posts were sanctioned. The Director met each of the IISER Fellows. The memory of that meeting is still vivid in my mind.

He told me that the entire concept of contractual positions for faculty was faulty, and that he thought such positions were simply glorified postdocs. I reminded him that my responsibilities in the institute had been no less than any faculty member. I had taught in every semester (and had very good teaching feedback), had independent grants, had awards, and had published from IISER Kolkata, unlike some of my colleagues in permanent positions. He said he agreed that my CV was stronger than some of my colleagues, but he could not give me a regular position due to lack of sanctioned posts. He then told me, “You are a woman, you have a family, your husband is here and he has a permanent job. Why are you bothered about a career? I will make you a Scientific Officer, and you should be happy. You can teach if your HoD agrees, and even be a co-PI in grants. That way you can also do some research.” In my fury, I gave him a piece of my mind and left his office, throwing his offer of the permanent position at his face. That was the end of cordiality between us. Two of us had agreed to stay on as Fellows until new posts were sanctioned, and what followed was a period of immense mental torment for my family and my students. I faced selection committees every year. When new posts were sanctioned, we were “upgraded” to Assistant Professor (on contract), in complete violation of rules. In the next round of interviews, my colleague was offered a regular position, while I was offered another six months on contract. When I refused to accept this, I was given one year on contract. Finally, in 2015, I was made an Assistant Professor. The members of the Selection Committee asked me why I was still on a contractual position, when I was eligible to be Associate Professor. I had my little moment of triumph, when I told them that the Director would not allow me to apply for the post of Associate Professor, and he blurted out something about rules, which clearly nobody bought.

Nearly nine years later, I am still an Assistant Professor [at time of writing] at IISER Kolkata, but I am a survivor. My students and I have gone through terrible times, but that has only made us more determined to perform, and more resilient to the perturbations within the institute. The institute has a new leader, and the environment is changing fast, for the better. The Dog Lab has endured several storms, and now, we have arrived. What I consider my biggest achievement is not the publications or the grants, but the happiness that dwells in our lab. My friend, Sumana Annagiri and I have decided not to build walls between our labs in the new campus. The Behaviour and Ecology Lab is not just a laboratory where students work, but their second home. A student once told me that her friend, who is an ardent Harry Potter fan, calls our lab the “Room of Requirement” for IISER Kolkata students. From one HP fan to another, there couldn’t have been a better compliment. Looking back, in spite of all the dark days that we have endured, the overall feeling I get is that of satisfaction – I still see the glass a little more than half full.

This article was first published on IndiaBioscience.

Editor’s note(4/24/2019): Anindita has now been promoted to Associate Professor.