Quick fixes may address person-specific issues, but long-term reliance on these quick-fixes will keep reinforcing the gender bias, undermining the massive amount of effort that women scientists put in. 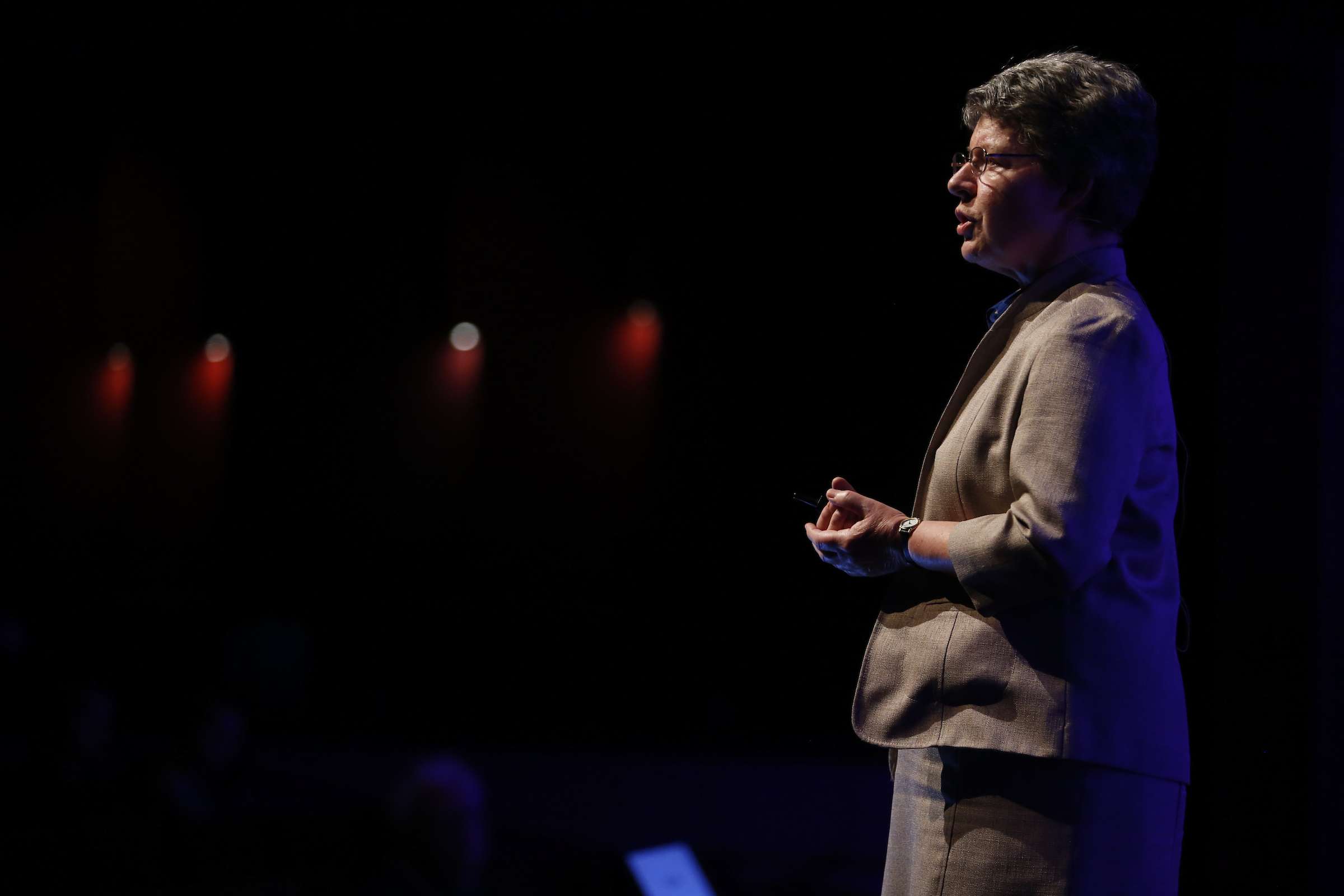 Image: Jocelyn Bell Burnell delivers the keynote speech at ‘Inspirefest 2015’. She discovered pulsars, but was ignored for the Nobel Prize in 1974. However, one half of this Nobel Prize was awarded to her male supervisor for the discovery of pulsars. Picture by: Conor McCabe Photography (CC BY-SA 4.0)

“The principal addressed our class, and urged the girls who had opted for science to give up their seats in favour of boys with lower marks. The girls, he said, were depriving those boys of good jobs in the future—because the only jobs that the girls would ever take up after getting married would be in the ‘ladle-office’ (the kitchen).” – Radha Balakrishnan (Return to the mainstream: The tortuous track)

“Regular schooling for me started only when my father was transferred to Gujjarwal in 1953. This village had a high school for girls and I joined the eighth class. I found that in general, schools for boys were better equipped, and had better standards and facilities. This seemed very unfair!”- R J Hans-Gill (In search of equality)

“When I went to IIT, I was initially completely overwhelmed by the gender imbalance. I remember I had mistakenly first been allotted a room in a boys’ hostel, because I had forgotten to specify ‘Kumari’ in front of my name! I still recall standing in the quadrangle with my luggage, besieged by catcalls, praying that some miracle would render me invisible! I was the only girl among the forty students in my section.” – Sudeshna Sinha (Empathy, not sympathy)

“…after passing her B.Sc (physics and chemistry) from Bombay University and having stood first (in first class) in that exam, she thought that doing research work at that famous institute was a matter of course. She then applied for admission there and received a prompt refusal. The reason cited being that she was a woman.” – Vasumati Dhuru on Kamala Sohonie (The scientist lady)

These are excerpts from a collection of essays called ‘Lilavati’s Daughters: The Women Scientists of India’. This book was released by the Indian Academy of Sciences, Bengaluru, in 2008. The essays, many of them autobiographical, describe the hurdles that scientists faced while navigating themselves to success. Though women have increased access to school and college education at present, it is unfortunate that generations of women scientists still face some of those hurdles that appear in the essays. In a recent article, postdoctoral researcher, Prabhavathy Devan, articulates the issues that are currently weighing on many female postdoctoral fellows in India. Given that the onus of shouldering most of the familial duties mostly falls upon women, women scientists find themselves having to jump through more hoops compared to their male colleagues. This problem is worsened by the lack of a solid support system. Inappropriate questions during an interview such as ‘When are you planning to have a child?’ underscore that women are still viewed as primary caregivers. Such questions usually have negative connotations that  hint towards a possible slowdown in ‘research productivity’.

The aforementioned factors are contributing to gender bias in academia. The article, ‘A Manifesto for Indian Women in Science by a Woman in Science’, lists out some corrective measures to create a better working environment for female postdoctoral fellows in the country. Among the multiple measures listed, a couple of them warrant a deeper perusal.

1. Due to a scarcity of academic positions, one of the measures directs the community to “accommodate initiatives to make alternative careers such as science journalism, science education, intellectual property rights and patent filing, and research administration, attractive and valuable by creating more job openings for women.”

It appears that the suggestion is to make such careers more available, if not exclusive, to women. This is a red flag because it ends up reinforcing two stereotypes.

First, that these professions are ‘alternative careers’. We must refrain from this term as it promotes the misconception that a research career is the only legitimate career in science. This may lead to an idea that such careers can be the fail-safe option in case a career in research does not work out. It should be highlighted that all of the aforementioned careers require specific skill-sets and talent to the same extent as research careers do and also require an equivalent amount of patience, time, hard work and dedication.

The other downside is that this measure may prove to be counterproductive, leading to segregation on the basis of one’s sex and gender, rather than their innate capabilities or interest. As Somdatta Karak, the science communication and public outreach officer at CCMB Hyderabad, tweeted, “Research administration, education, communication all are women dominated. I sometimes wonder what lead to these. How much of it is because women are good at these, or men don’t enjoy doing it or these jobs are already labelled as jobs for women?”

2. The article also calls for women empowerment schemes: “Women Empowerment Schemes should be generous about the duration of the project given to women candidates due to family responsibilities; for example, provide a year or two more for women. An option of part-time tenure should be introduced when they have no family support and are single parents. It is imperative to reduce their vulnerabilities and focus on holistic empowerment including child care, schooling, transport, subsidised food, medical care and up-skilling with the aim of enhancing the productivity of women by making their lives safe and secure.”

Such women empowerment schemes may provide immediate relief. However, the suggested schemes shall endorse the social construct that women single-handedly manage domestic duties that are likely to lead them to sacrifice their research career. Strangely enough, these policies may fuel the already prevalent notion ‘Ah! She is a woman, she had it easy’, thus, providing an unwarranted boost to the gender bias. Ironically, such a scheme is completely oblivious to similar needs of fathers, single or otherwise.

So, what can we do about it?

At this point in time, quite a few women researchers are facing issues. These scientists require empathy from the institution and the immediate family; else, science shall soon be on the verge of losing out on a cohort of talented scientists. The heads of research groups should be ready to give a patient hearing to the problems being faced by their postdocs and work out solutions such as flexible work timings and additional assistance in projects.

But, these quick fixes may only address person-specific issues and do little to usher in any major institutional changes. Using these quick-fixes, in the long run, will keep reinforcing gender bias and undermine the massive amount of effort that women scientists put in.

The need of the hour is close scrutiny of the underlying causes. In 2018, Charu Malhotra and Kirti Joshi published the results of a survey that aimed to investigate the possible reasons that lead one to doubt the capabilities of a woman scientist. This survey was conducted among 259 students from four co-educational schools in Dehradun. One of the questions asked whether the students felt that ‘fewer girls than boys are interested in higher studies in science and math’. Of the students who felt so, 38.2 % attributed this to the following reason: ‘Study of science and math is difficult and girls want to study easier subjects’.

This survey points out that this bias sets in quite early and one has to start gender-sensitisation programmes in the school-level itself.

Additionally, policy-level changes should aim to fix the gender imbalance. Provisions for paternal leave (comparable to what is offered to women) would support a change in social conditioning. High-quality, affordable daycare, as Prabhavathy’s article suggests, is an absolute must. Re-entry schemes and fellowships (without stringent age restrictions) should be made available for both parents. Prajval Shastri, an astrophysicist, draws attention to the precaution needed to draft out policy, “I think it is important that each of us, especially those of us from marginalised groups, whether women who are stereotyped, or men who go counter to the stereotype, or people of other genders, or people from intersectionalised groups, draw upon our personal experiences, but do not make that personal experience be the ONLY driver of our analysis of the problem as a whole. Only then do we stand a chance of recognising each of our privileges and cultural capital that has enabled many of us to survive, to see the consequences of intersectionality, and to examine proposed interventions against the litmus test of needing to seed cultural change in addition to seemingly addressing the problem at hand per se.”

Only when we achieve a complete overhaul in mindset and social construct, can gender equity in academia – or in any field, for that matter – become a reality. The woman in science, who is now resolutely working against the odds, will stress the fact that she does not want freebies, all she wants is a level playing field.

Anusheela Chatterjee is a science writer at Tata Institute of Fundamental Research, Hyderabad.

1 response to "Women in science don’t want freebies, but a level playing field"