Spoorthi is a resource for women in science in India and includes a diversity of voices of women.

To mark the International Day of Women and Girls in Science on February 11, 2019, IndiaBioscience released Spoorthi, a booklet celebrating Indian women in science. Filled with lovely illustrations, the booklet provides resources and insights for and by women in our scientific institutions. Thelifeofscience.com provided India Bioscience with a curated list of women scientists for this work.

Spoorthi is a resource for women in science in India and includes a diversity of voices of women. The pages include a list of schemes that are aimed towards women to encourage them to pursue a career in science or to reenter the mainstream. Some of these are listed below:

In the booklet, sociologist Anitha Kurup said: “Until now, the underrepresentation of women has been captured partially by using frameworks that put the onus of the problem on the women. We are told that women make a personal choice of leaving science research, or that there are societal and family factors responsible for their underrepresentation. While I will not discount that these are important factors, I do not believe that these are the only reasons why more women are not out there occupying higher positions”. 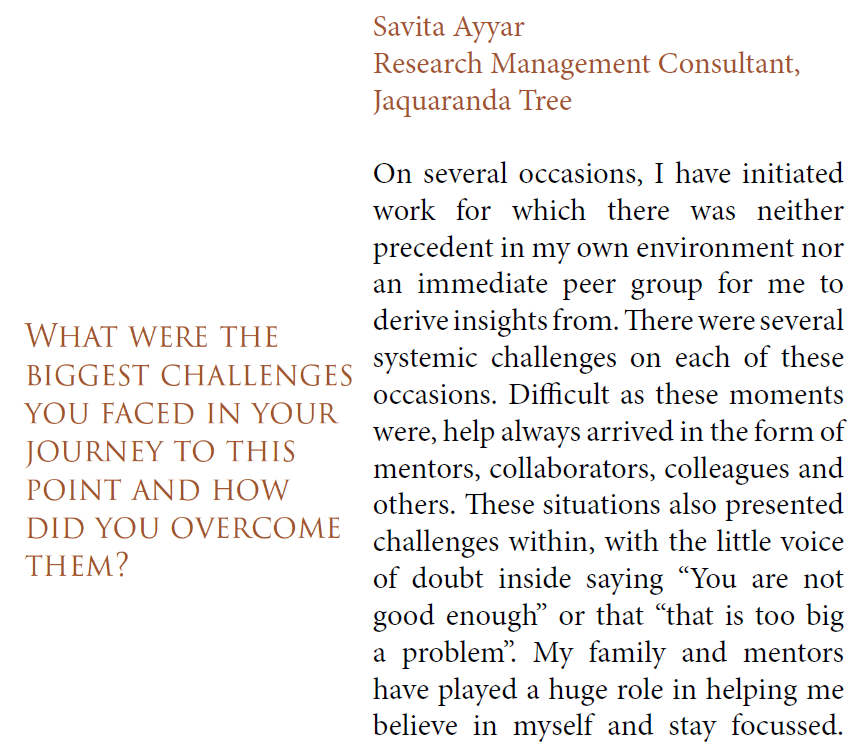 “As a researcher who has been studying this issue [faced by women in science] over a decade, I see that the ways in which biases operate, both conscious and unconscious, keep changing. And it is important to recognize these changing forms and to address them”, Anitha added. 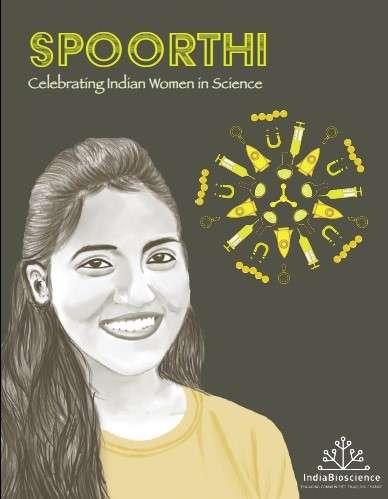 Dhanashree Paranjpe from Abasaheb Garware College, Pune, who restarted her science career with the help of the DBT funded Ramalingaswami Re-entry Fellowship, shared her experience in the booklet:

“The biggest challenge has been coming face-to-face with gender bias, harassment and other unethical practices in the scientific community. Not so long ago I have (first-hand) heard the following statements spoken by prominent scientists in reputed research institutes in India targeting various young women who were hard working, sincere and promising scientists:

‘Girls become useless to do science, their priorities change when they get married’, ‘Oh, she got her name on the publication by flaunting xxxx in front of her boss’, ‘I wouldn’t have given her another year’s extension on this project if I had known that she is pregnant’, ‘Does she know what research means? Just because her mentor/ husband is a big shot scientist she gets to be a faculty here’ and so on and so forth.

I saw a lot of this and other unethical practices during my time in India such as contempt/ disrespect for each other’s fields of science, publishing manipulated data, side-lining project assistants’ or students’ contribution in a publication, honorary authorships being given—it was disheartening, to say the least,” she added.

“I decided to quit not just research but even academic field after finishing my thesis. I took a break after my PhD, got married, went abroad, and did some soul searching. The “itch” of becoming an ecologist wouldn’t let me quit.

“With a renewed confidence and fresh ideas, I returned to India on Ramalingaswami Re-entry Fellowship. I already knew that the career break after PhD and resulting “gap” in my publication record is going to put me at a disadvantage in the hiring process—and it did! I was indirectly told in many institutes that I was above the age of being hired for a starting position—there are no written rules against hiring older candidates but somehow people are reluctant to do that. In short, I am past my ‘expiry date’.”

“We collectively need to understand that career path need not be straight and monotonous for a person to be considered as “promising” scientists. There can be detours, breaks in a career which may actually bring a fresh perspective, new skills to research”, said Dhanashree.

Anitha pushes for a nation-wide data collection initiative about the women in the science and their career trajectories. “If we have knowledge about a wide variety of women who use very different strategies to progress, that is an information base that one can use to develop their very own approach to leadership.”

The onus of improving gender parity, however, shouldn’t lie only with the women researchers. “It is important to locate your allies in different spaces and make them part of this larger journey of trying to redefine gender equality in workspaces, so that they’re able to harness capacities of both men and women, who bring in their own strengths into furthering the cause of science and contributing to the national development. We also need to realize that gender identity is not defined by sex alone”, Anitha is quoted as saying.

So how can male scientists help? “Though an academic workplace can also be challenging for men, women scientists face singularly complex and subtle forms of discrimination that need to be observed with care and sensitivity”, said Sunil Mukhi, a theoretical physicist at Indian Institute of Science Education and Research Pune. “Incentivising women students, particularly those who face negative social pressures, highlighting the historical achievements of women scientists, making workplaces more women-friendly, are all small steps that can have a cascading impact”.

The booklet also features stories by Shubha Tole about her experiences as a PI-mommy as well as suggestions by Vaishnavi Ananthanarayanan and Sandhya P Koushika to make workplaces women-friendly. It also contains information about workplace sexual harassment laws and redressal mechanisms in India.

These conversations with women in science are important to foster a better, women-friendly environment in Indian science. But, these stories cannot remain just that and need to become drivers for policy interventions at all levels soon, so that such an environment becomes a reality.

Talking about women in science schemes and awards at the Science Policy Conclave organised by British Council in New Delhi this February, particle physicist Rohini Godbole prompted the question “Are they sufficient?” The recent Padma Shri recipient went on to say, “These policies are not based on research. We need to collect more data and use them to form policies to make science more equitable”.

This booklet is a welcome resource in this direction. Students, researchers, policy makers or any person looking to make a difference and to encourage women interested in science can draw from the stories and suggestions offered by the women who have made the journey before.