Nandita talks to Pumza Tshebe, director of Scifest Africa, about her journey into science outreach. 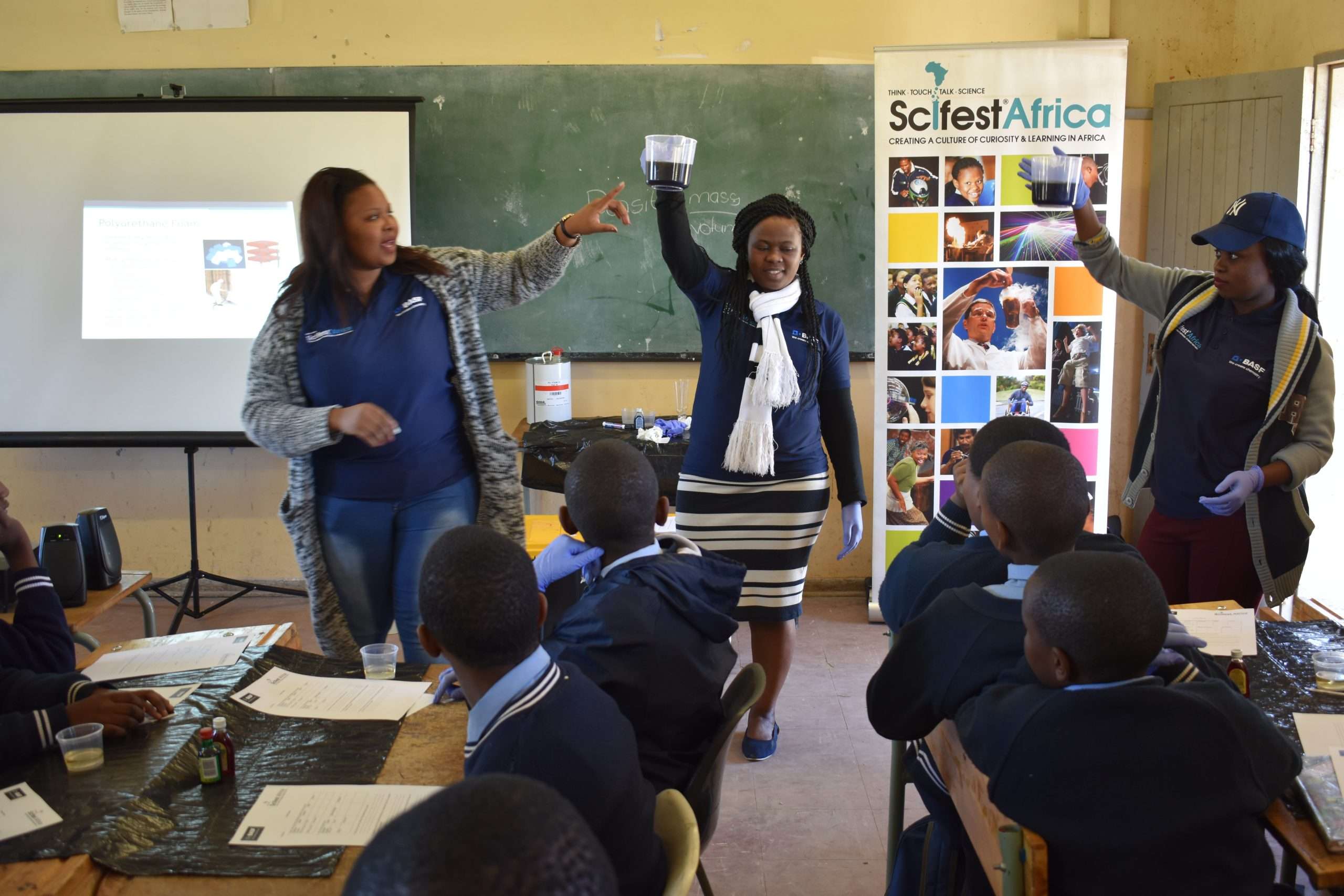 As you are reading this, Pumza Tshebe is probably fighting to stay on top of things at the office of Scifest Africa in Makhanda (formerly known as Grahamstown), South Africa. The mood is much more chaotic there—the 23rd edition of Scifest Africa 2019 is after all less than a month away!

When I caught up with the festival director for an interview in Los Angeles in November, we were in a lighter frame of mind. We both had some hours to kill in the sunny California outdoors, and I invited her to open up to me about her big dreams for the Science Festival. And Pumza is not shy to dream big. “If I had 10 million rands each year, I would have things flying everywhere!” she laughed.

She’s only half-joking. Running a science festival is no easy task, especially if the goal is to enthuse youngsters. The activities are planned to make them as relevant to school curricula as possible. But Pumza, who has been associated with the festival for nine years, knows very well that kids are not interested in seeing the same activities year after year. Each year, the fest’s schedule boasts of speakers from all over the world, covering topics from Antarctic exploration to material science; from cutting-edge medical technologies to space-time continuum; from forensic pathology to phytomining.

Still, she admits that it’s not always a house-full situation, and there’s nothing that annoys Pumza more than empty seats at her event. So she is always looking for ideas to elevate the quality of each upcoming festival—high school achievers are invited to speak; and recently, the festival outreach began making an effort to use photographs of the speakers in more active poses rather than boring portraits. The language used in the festival book is quite accessible and the speaker list has a healthy gender diversity.

The classrooms were too small to accommodate such a large group. So, Pumza carried on with science outreach outside. Credit: Pumza Tshebe

“Now that I am in a position where I can drive the festival, I am asking myself ‘what is a science festival? Is it just for people to come and look?’” Not to Pumza. She is determined not to let her festival stagnate. “I want you to get there and just go… wow. You wanna see things flying, you know? You wanna see technology, you wanna see science. I want people to line up for my science festival like they lined up when we visited Universal Studios. That’s what I’m always striving for.”

And it does seem like an impressive line-up this year. The theme is ‘Discover your Element’ in honour of the International Year of the Periodic Table of Chemical Elements as proclaimed by the United Nations. Speakers include theoretical physicist and Mars One Astronaut Candidate Adriana Marais, astronomer Daniel Cunnama, nuclear scientist Lotte Lens and biotechnologist Mathabatha Setati. Besides the talks, exhibitions, and workshops, the SciFest team has planned for a live show hosted by BBC World Service’s CrowdScience, where a panel of experts will answer questions sent in by listeners “on everything from space travel to solar power”. They are also hosting a “Science is Listening” series where they are inviting the public to have a conversation with the scientists and share their opinions about current research.

Pumza’s passion for science communication came from a piece of advice she heard during her BSc research days. “My supervisor said to me that when I’m able to explain my research and findings to a grandparent in two sentences or a paragraph, then I will have achieved what I’m supposed to do as a researcher.” Pumza struggled in her attempts. There is a word in the Xhosa language for the plant she was working on, but it was too difficult for her to convert all her data into an easy story. It did not help that her grandmother was illiterate and had no exposure to scientific concepts, much less an idea of what an electron is or what carbon sequestration is. This failure to communicate with her own grandmother stung her.

“I found it so difficult, and that’s when a thought got stuck in the back of my mind—how many other scientists are there who can’t communicate their findings?” In hindsight, Pumza thinks this could be when she began being drawn towards science communication. She started working with Scifest Africa in 2010, during her honours year. She grew more and more passionate about working there and eventually shifted from academics completely.

Her parents passed away when she was very young, but Pumza had all the support she needed from her grandparents who raised her and her cousins. They did not have much money; her grandfather worked as an operator in an architectural firm while her grandmother worked as a cleaner in the school that Pumza attended. Notwithstanding their modest means, her grandparents knew how valuable an education could be and spared no expense or effort to send the girls to the best schools, even if it meant less to eat at home. For their part, the kids stayed focused and did well in school. Pumza recalls her sisters and her being the first black kids in her school in Port Elizabeth, and later the first black kids to become prefects.

“That was the sacrifice that they made for us. I will never forget my grandfather saying this: ‘We don’t have a fortune to leave you, but this is our inheritance to you, an education.’”

Pumza Tshebe was one of the 49 other women in S.T.E.A.M. from around the world, who accompanied me to the USA on the ‘Hidden No More’ exchange programme sponsored by the US Department of State and 21st Century Fox. You can read more about this programme here and more about Scifest Africa 2019 here.