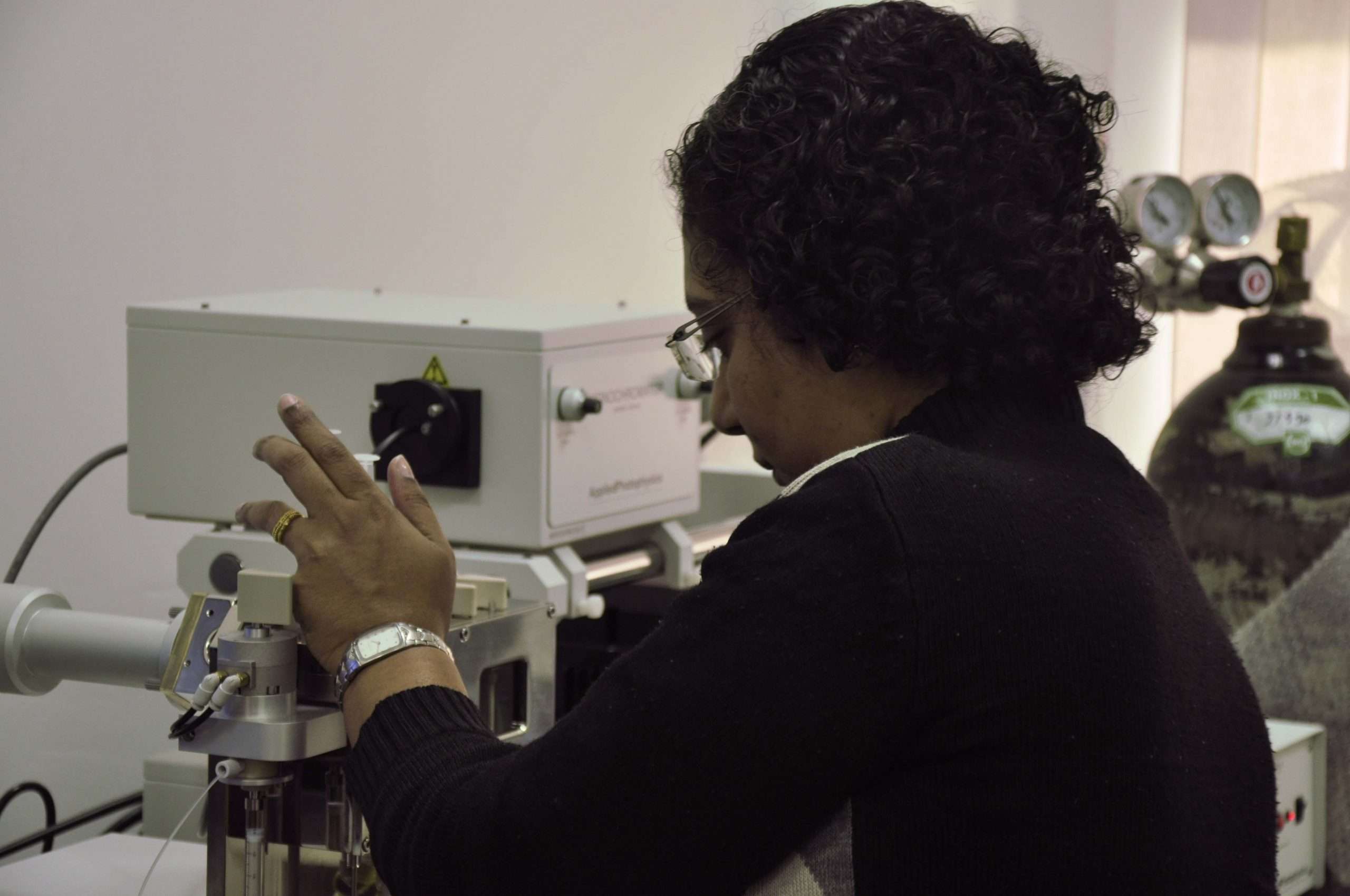 She picks up a metal hammer and taps open the valve of a gas cylinder. “Say you want to know how stable a system is,” begins R. Mahalakshmi, Associate Professor or Molecular Biophysics at IISER Bhopal , “first perturb it and see how resistant it is to change. One way to measure this resistance to perturbation is with a stopped-flow spectrometer.” 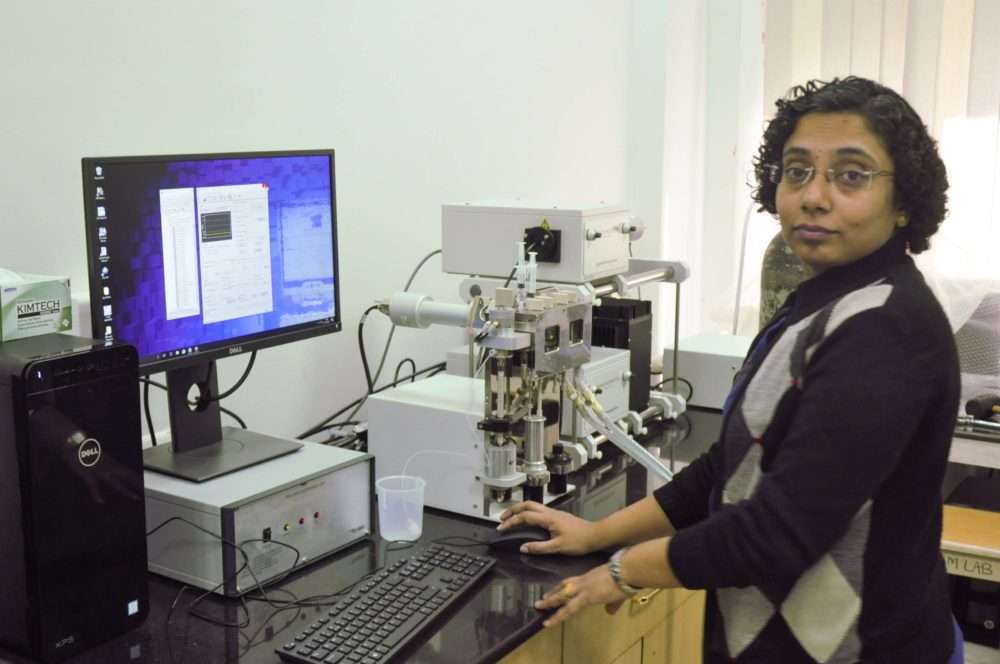 She walks towards the stopped-flow spectrometer set on the table and demonstrates. In a syringe lies a protein which “lights up” [fluorescence, in scientific terms] in its natural folded state. Most [if not all] proteins have to fold into a very specific “shape” in order to function, and this folded state has a specific fluorescence. In a second syringe is a ‘perturbant’ that can, under specific conditions, cause the protein to unfold – in other words, the specific “shape” of the folded protein is perturbed. In the perturbed state, the fluorescence changes, which we can measure. “By measuring how resistant the protein is to the perturbant,” she says, “we get to know what makes a protein stable.” 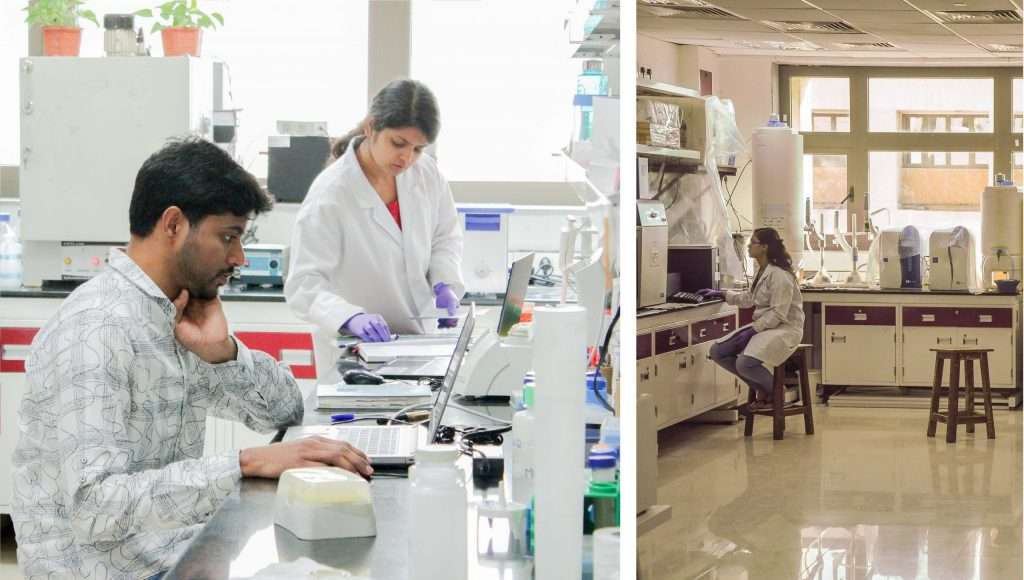 Mahalakshmi is one of the many scientists in the world trying to solve the century-old protein-folding problem. Proteins of the same family are all folded the same way and they’re all stable to a similar extent, performing the same functions, she says. “The protein always does it right and it’s always an ensemble of identical structures with subtle differences.”

But how do proteins fold? What decides their structure and what makes them stay folded? Which molecules let them misfold? What causes the shift from the functional to the non-functional or disease states? These are questions that form part of the protein folding problem, and we still don’t have definite answers.

“I focus on a class of proteins called beta-barrel membrane proteins in combination with their lipid milieu,” says Mahalakshmi. “There are only a handful of groups internationally who are working on this. Of them, only very few groups are working on transmembrane beta barrels in particular.”

An unintentional trajectory to biology

“I wanted to become an air force pilot, but my glasses got in the way,” says Mahalakshmi of her childhood ambitions. “I had a passion for physics and was really good at mathematics, despite the general belief that women aren’t very good at maths. So I wanted to do astrophysics.”

In high school, had to choose between history-commerce or pure sciences. Though she was not so fond of biology at the time, she opted for the latter. “Surprisingly, I started enjoying biology and realised it wasn’t as bad as I had imagined.”

On her lab website, she recalls a significant moment: “As a teenager, an article I came across on ammonia transporters simultaneously fascinated and piqued my interest in membrane proteins.” Having majored in biology (in high school), she went against expectations from neighbors and friends by declaring she did not want to become a doctor. “My family was very supportive of that. I took a Bachelors in Biochemistry and things started building up.”

Today Mahalakshmi is a professor in Biophysics, leading a team of researchers at IISER Bhopal, established in 2008 as a premier research institute in the state of Madhya Pradesh. “Considering how other universities and institutes worldwide are doing, I’d say it’s much better here. The entire concept of IISER is quite good and includes the opportunity for first hand training in research for students.” 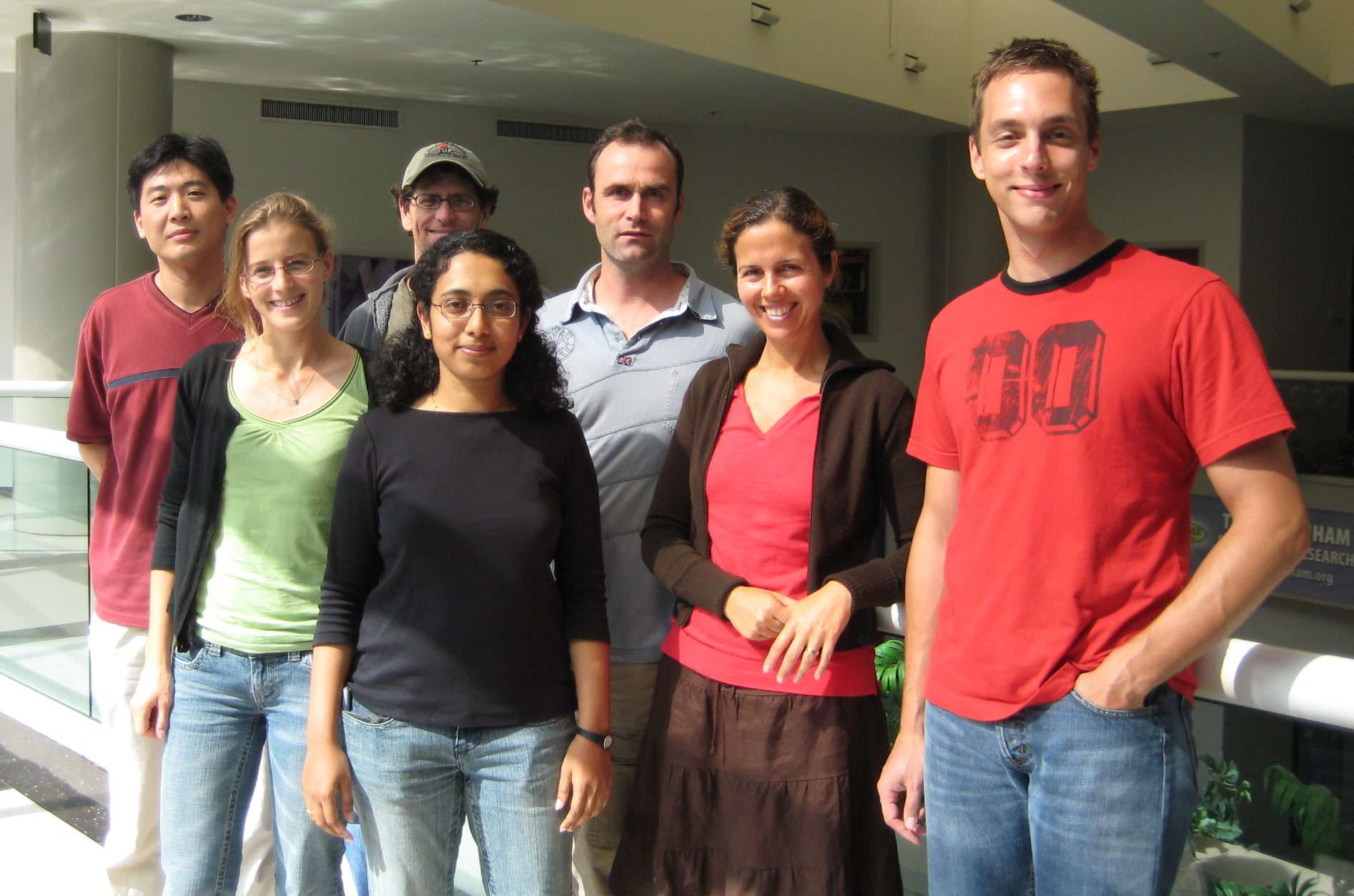 “In the USA, research was more like a job and less of study. The level of professionalism, the approach to a problem, the infrastructure and the way it’s managed are all different. But I don’t think one is better than the other. These are differences that come down to the way the whole country functions.”

“We’ve had some of the best scientists coming from India and whether or not they got the Nobel Prize is secondary. I believe in the saying ‘things work out best for those who make the best of how things work out.’”

Proteins are one of the four major biomolecules that are part of any living organism, the others being lipids, nucleic acids, and carbohydrates. Broadly speaking, informs Mahalakshmi, there are two classes of proteins: membrane proteins and soluble proteins; they’re either in the membrane or not.

Membrane proteins, which she studies, are not readily water-soluble. “They like lipid environments, so they stick to lipids within the cell membrane. They’re more challenging to study than soluble proteins, because you have to give them the correct environment in which they fold. If they don’t fold, they tend to precipitate, aggregating into non-native assemblies. Several neurodegenerative diseases are caused because of protein misfolding and aggregation – Alzheimer’s, Parkinson’s, and Amyotrophic Lateral Sclerosis (ALS), to name a few.”

Mahalakshmi opens up an image on her computer. “This is one of the proteins we work with. It is from the outer surface of Yersinia pestis, the bacterium that causes plague. When the bacterium enters the host, this protein attaches to help invade the host cell.” The reason Mahalakshmi wants to understand this particular protein is because it has a more popular cousin that sits on Escherichia coli, a bacterium usually considered non-pathogenic. “We have E. coli in our own gut and this doesn’t make us sick. But the similar protein present in Yersinia is pathogenic. They look almost identical. If I take the protein from the pathogenic version and put it into E. coli, then E. coli will become pathogenic.” This is very intriguing. 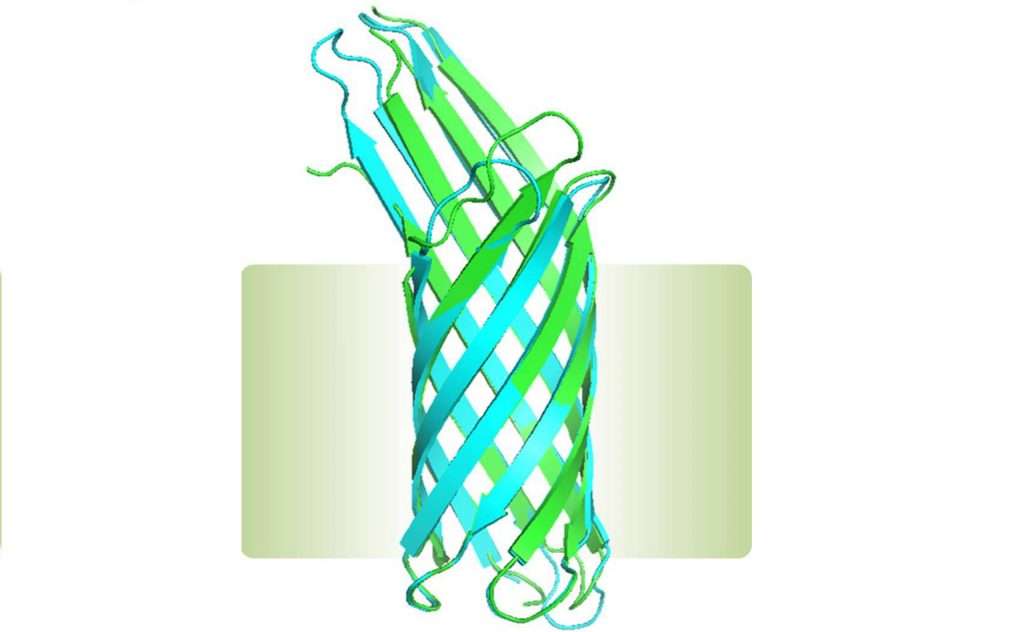 Looking up from a tightly packed globule on the computer screen, Mahalakshmi says, “Ideally speaking, a protein molecule would have every atom in the protein rendered as per its van der Waals radius, or the overall area that it occupies. We use “ribbon diagrams” to obtain a simplistic representation of the protein. A simple analogy to this would be using a ‘:’ and a ‘)’ to represent a face with a smile.

“E. coli is like our workhorse for protein production,” she continues. “Getting large quantities of proteins by growing human cells in the laboratory is difficult. So we put an edited version of the human gene into the bacterium and use it as our expression system. If we want to change an amino acid, we go back and mutate that region which allows for it to be made.”

The VDAC protein, for example, has 294 amino acids, giving us a total library of 294 variants. Even if we were studying the stability of one mutant a day, which in itself is an exaggeration, that’s nearly a year to understand just one specific condition. I then have to look at how the stability is related to the function. Everything is controlled by the protein sequence and how this responds to its local environment. It’s not straightforward and takes a lot of patience and persistence.

A Richard P. Feynman quote that Mahalakshmi holds close goes, “I don’t feel frightened by not knowing things… by being lost in a mysterious universe without any purpose, which is the way it really is as far as I can tell, possibly.”

“The field brings together biology, physics, chemistry and mathematics, all in equal proportions and it’s very difficult to identify candidates who are mentally tuned for all four fields. By the end of school, they’ve already made up their minds about what they like and what they don’t. I completely understand. I was petrified of geography. It was very difficult to memorise which part of India has which mineral, though it’s very important to know these things. Honestly, I didn’t like biology either, but the more you delve into a subject, it becomes more interesting.”

If we only increase financial incentives, we might be attracting students for the wrong reasons. Instead, if we were to teach them that research is also an important component, we could get them motivated for the right reasons, right from the beginning

How far can this take us?

As more pharmaceutical companies and researchers look to develop more potent drugs, they choose to work on proteins that directly relate to disease. “I would say that we’re at the early stages,” Mahalakshmi explains. The membrane proteins she studies hold promise as drug targets for cancer, Alzheimer’s, Parkinson’s, and other neurodegenerative diseases. The more she uncovers, the more precise the drug design processes can get. Simply put, the more you know about something, the more you can fine-tune what you want and what you can get from it. Similarly, the more you know which part of a protein dictates its folding, stability, and function, the design of drugs can be made more specific. Instead of screening 100,000 drug molecules, specific parts of the proteins can be targeted.

But that’s not all. Mahalakshmi envisions a near future where we will be able to engineer a protein to do specific tasks. “Imagine if I were able to tweak the VDAC protein to transport a specific molecule that I design. Now imagine having it engineered into electrical circuits where the 0s and 1s open up multiple options. Or I could create a filter that selectively removes lead from water – how useful would that be?! Bio-products, including proteins, go bad with time. So we could engineer food so that even if it goes bad, it does so after several years and not a few days.”

The possibilities are infinite. 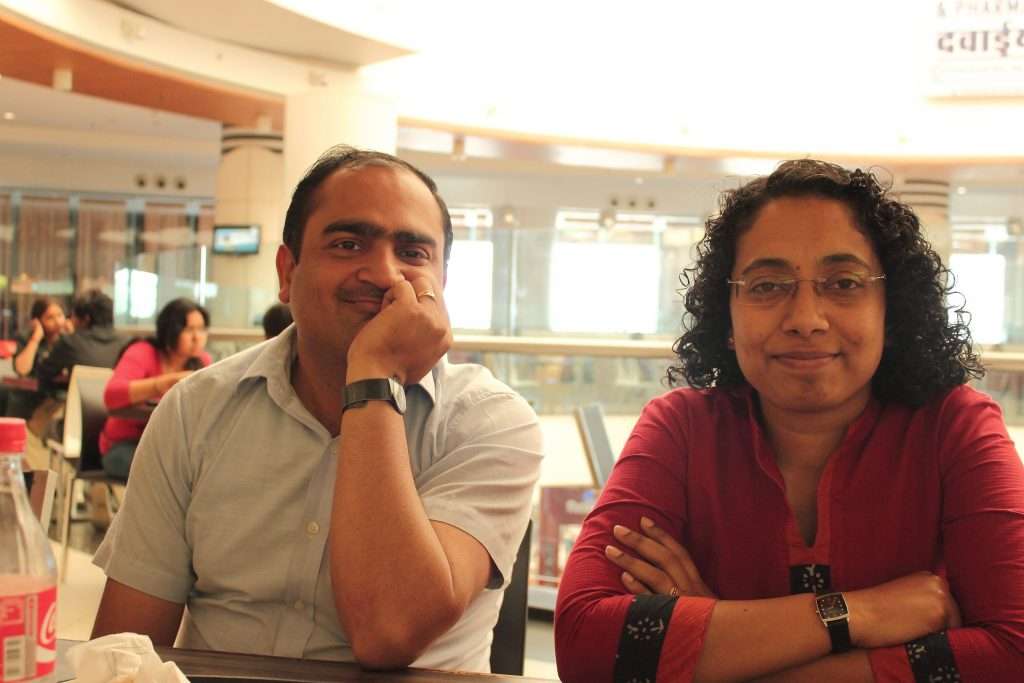 Mahalakshmi, with her colleague and husband, Vikas Jain