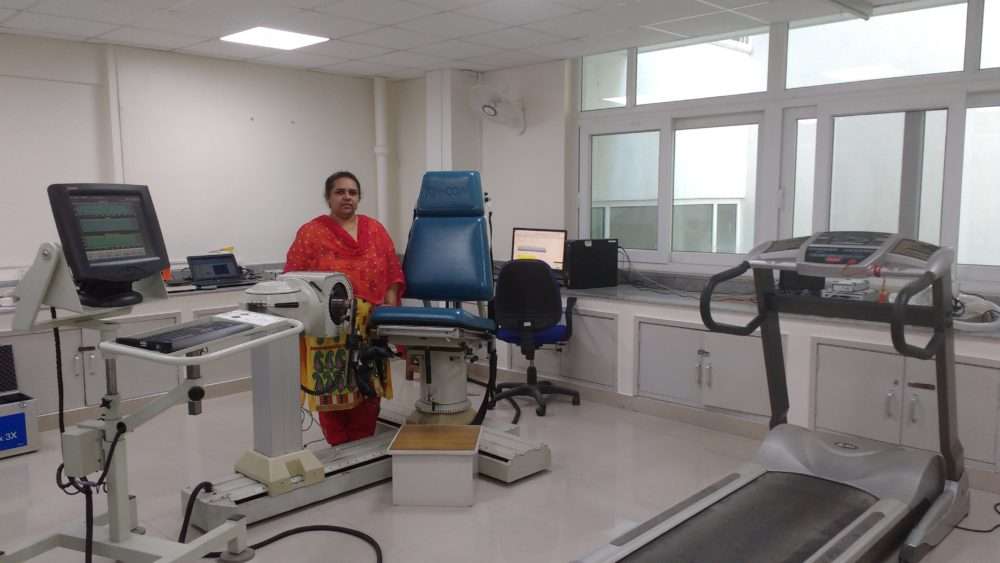 WHAT?  Researcher in clinical physiology

The moment I stepped into the St. John’s Medical College building, I sensed tension in the air. As I walked towards the office of Sucharita Sambashivaiah, Head of Clinical Physiology Unit,  I passed by sleep-deprived students frantically revising their lessons. Evidently, semester exams were underway in the medical college.

On the third floor, I found Sucharita. She welcomed me into a spacious office lined by tall windows overlooking a lush garden. Sucharita works in the field of nutrition and physiology. Her goal is to understand the working of Type 2 Diabetes and she does this with her team of MDs, PhDs, dieticians, field scientists, exercise trainers, staff nurses and technicians. After exchanging greetings, she dived right into the interview saying, “Let me explain my research work to you by showing you the labs I work in.”

First, we entered the clinical physiology lab, which was brightly lit, sparkling clean and occupied by several machines. Before telling me what the machines were for, she introduced me to Type 2 Diabetes, a condition that is usually associated with high blood sugar/glucose. Insulin, a hormone produced in the pancreas, helps to control blood glucose levels by enabling tissues to absorb glucose from the blood. But this scenario doesn’t unfold so smoothly in the case of Type 2 Diabetes patients. Two key events characterise Type 2 Diabetes: one, insulin’s power to promote glucose uptake is diminished (insulin resistance); two, the β-cells of the pancreas cannot secrete sufficient insulin to control blood glucose levels.

India is on its way to becoming the diabetes capital of the world with an alarming 50.9 million diabetic patients in 2017. The number is expected to increase to 80 million by 2025. Sucharita is very concerned, and a bit puzzled. The globally well-known causes for diabetes are excessive body weight (high Body Mass Index), unhealthy diet and a sedentary lifestyle. “[But] the majority of Indians developing Type 2 Diabetes have normal body mass index (BMI), hence understanding the mechanisms becomes important,” she noted. Realising that there is more to the story behind the link between BMI and diabetes in India, Sucharita set to solve the mystery. While most Type 2 Diabetes research in India is focused on how the pancreas secretes insulin, Sucharita’s is one of the first efforts to explore the role of skeletal muscle. This muscle is responsible for almost 80% of insulin-mediated clearing of glucose from the bloodstream. Sucharita’s lab is testing whether a lifestyle intervention programme – one that includes a planned diet and weight training with milk protein consumption for a period of 12 weeks – can prevent the development of Type 2 Diabetes.

For this, she collaborates with various hospitals located in Bengaluru. Patients aged between 18 and 60 years with borderline blood sugar levels volunteer for her programme after being made to understand the benefits of lifestyle modifications with no drug administration. Sucharita received a fellowship from  Wellcome Trust-DBT India Alliance in the Clinical and Public Health category to carry out this work.

Volunteers are enrolled for a three-month program where regular follow-up are planned to keep an eye on their progress. Sucharita makes sure all efforts are taken to provide utmost comfort and care to them during the procedure. To analyse the progress of this intervention program, two integral parts of skeletal muscle, i.e. its function and mass, are analysed.

A day in the life of a volunteer

Rajesh*(name has been changed to protect identity), the volunteer of the day, was picked up by a cab in the morning and brought to the research centre. Rajesh is a young working professional who was recently diagnosed with high sugar levels. First, he went through a frequently sampled Oral Glucose Tolerance Test (OGTT) where he was given a fixed amount of glucose and after some time, blood samples were taken. Simple mathematically derived techniques are used to assess beta cell function (is insulin being produced efficiently?) and insulin sensitivity (is insulin doing its job efficiently?) through frequent OGTT samples.

While Sucharita explained her process to me, I could hear music from the adjoining room. She sensed my curiosity – “That’s one of our volunteers watching TV… we try to provide them a homely environment.” There is even a kitchen, where healthy food is cooked, she informed me.

Afterwards, I witnessed the working of Isokinetic Dynamometry. This technique was being used to assess Rajesh’s muscle function. Isokinetic Dynamometer is a gold standard and non-invasive technique to measure the muscular strength, endurance and fatigability of any group of muscle. Endurance is the ability of a muscle or group of muscles to sustain repeated contractions against a resistance for an extended period of time. Muscle fatigue is the decline in ability of a muscle to generate force. In Rajesh’s case, Sucharita’s team was focusing on the lower limb.

Princiya, the technician in her lab, was performing the assessment with help of Nidhi, a registered dietician, and Pranathi, a physiologist who is currently pursuing Ph.D. under Sucharita. After briefing Rajesh, they helped him strap his feet to the machine and then began the testing. The machine moved at normal walking speed. It moved forward and the subject was asked to push his feet either along or against it. “Between each trial one or two minutes of resting time is given to allow the muscle to regain its energy. We do three to five trials,” said Princiya.

While the strengthening exercise went on, I asked Rajesh what it’s been like to be part of this program. “I feel energetic throughout the day and can easily climb six floors effortlessly. Earlier, I could only climb two floors,” he said. I noticed Sucharita, who was also in the room, smiling gently.

During the program, the volunteers are also given nutrition counseling to emphasize the importance of portion control and the inclusion of vegetables and fruits in their diets. “Indians love carbohydrate-rich diets and it is difficult to suddenly shift to a balanced diet. So, the planned diet enables the participant to adhere to the trial,” said Sucharita. To motivate and keep them going, she and her team makes sure that every week fruits, vegetable and healthy snacks are delivered to their doorstep by a popular online grocery store.

Nidhi, the dietician, explained that apart from diet monitoring, the volunteers also attend 36 sessions of gym training and six educational sessions. In the educational sessions, they are made aware of the glycaemic index, portion control, the importance of exercise, stress management and pedometer usage.

Gym membership at a facility close to their home is provided to the weight training groups. “Weight or resistance training mostly involving working with weight bars, dumbbells or weight stacks. It helps develop the strength and size of skeletal muscles,” said Pranathi, Sucharita’s PhD student. The exercise routine is designed by an ISSA-certified trainer. It has been established in the western world that weight training improves insulin sensitivity and glucose tolerance. Sucharita studied the effect of weight training in Indian populations and found that the improvements were quite significant. “It has helped individuals with prediabetes (where sugar level is higher than normal, but lower than diabetes) to revert to the normal level,” she said.

After this, I was guided to the histopathological lab where tissues are observed under the microscope to study changes in the skeletal muscle. Sucharita said that her team has successfully demonstrated that there is  no difference between the muscle mass of normal and pre-diabetes patients – however, the latter has lower muscle strength, which is a sign of lower physical fitness.

Tissue showing healthy individual vs pre-diabetes and after the intervention, in pre-diabetes, the reduction in fat cells, stained in orange

So far her experiments are going well. Sucharita is pushing for the exercise set-up being installed in the hospital OPD (out-patient department) so that patients can benefit more. She also looks forward to working with athletes to determine the nature of their skeletal muscle and advise suitable physical exercise and nutrition. Elderly people who suffer from sarcopenia (a condition involving loss of muscle for which no treatment is available) are another demographic that Sucharita knows can benefit from her program. She plans to develop chair exercises for them and hopes to reverse muscle loss by pairing it with a protein supplement.

Growing up in Bengaluru, Sucharita’s physician father and dentist sister would often discuss medical cases over dinner. “At the end of the day, I could see satisfaction on their faces as they were serving humankind,” she reflected. This influenced her to take up medicine too.

After completing her MBBS, she took up MD in physiology at St. John’s Medical College and Hospital in Bengaluru. When she joined the department, she was mesmerised by the scope of medical research so she enrolled herself in a Ph.D. program. “My parents always stood by me, especially my mother who taught me that nothing is impossible in this world,” she reminisced.

She received a research fellowship from ICMR and went to Imperial College London and National Hospital of Neurology and Neurosurgery, London. She also got fellowship to work at King’s College London to train herself in skeletal muscle function assessment methods. Sucharita is grateful for the mentorship she has received from several experts in the area of her research, specifically Anura V Kurpad, Stephen Harridge and Ronald Bosch. In Sucharita’s words: “I gave my 100% effort and my mentors gave another 100% so that I could achieve 200% success.”

Today, as a mentor herself, Sucharita is generous with praises for her team comprising mostly women scientists. She laughed as she pointed this out, and mentioned it was not a conscious effort to hire more women -“it just happened!”

Research work demands rigorous hours, but Sucharita says that she tries her best not to carry work home. She even manages to save some time to involve herself in outreach activities. So what keeps someone like her going strong despite being involved in so many activities? She replied with an anecdote about a prediabetes patient who had enrolled in their programme and later was able to participate in a marathon. The volunteer thanked Sucharita’s team for his success.  “Seeing the positive outcomes from patients keeps me motivated,” she concluded.