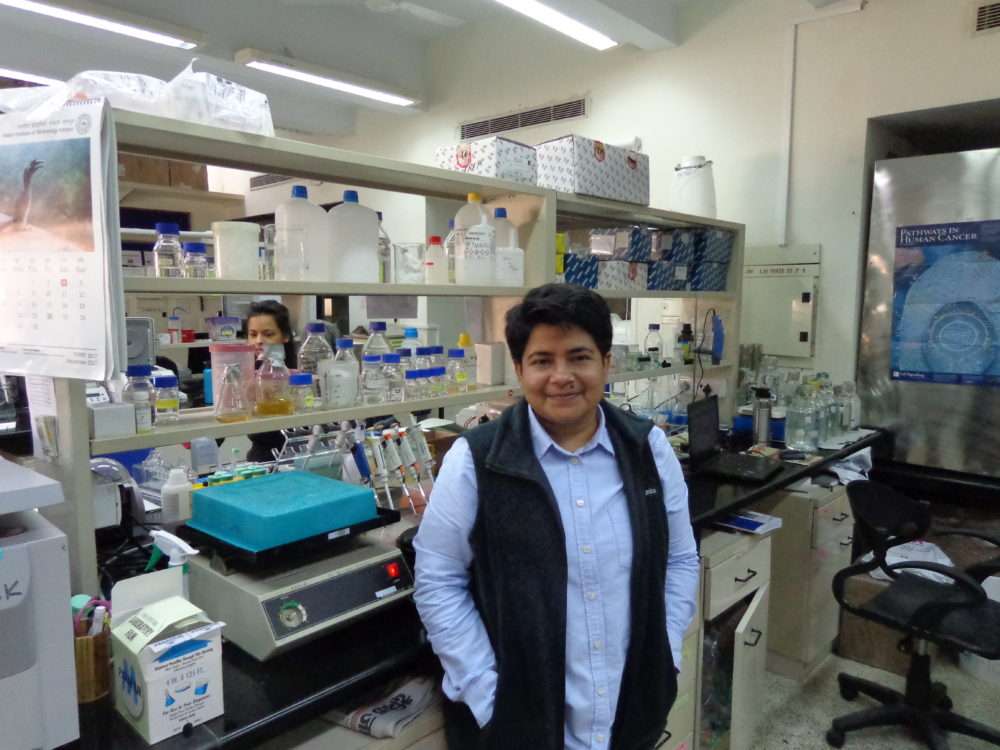 WHERE? Indian Institute of Technology, Kanpur

Clean, gleaming benches lined Bushra Ateeq’s laboratory and I watched curiously as her students worked diligently with the high-tech equipment that occupied the space. Picking up on my interest, Bushra unveiled her prize possession – a inverted fluorescent microscope. “In my Masters and PhD days, I had to go to other departments to use their fluorescent microscopes. Now my lab has one of its own,” she said proudly.

An Associate Professor at Indian Institute of Technology (IIT) Kanpur, one of India’s first IITs, Bushra focuses on cancers of the prostate, breast and the colon. “The whole idea for me is to fill the bench-to-bedside gap”, she said, referring to the typically long waits involved in translating research to treatments available in the hospitals.

“Our lab wants to discover anti-cancer therapeutic targets,” she began. These ‘targets’ are genetic biomarkers that can help detect cancer in its early stages. This is crucial because early detection drastically improves the chances of a cancer patient recovering completely. Bushra emphasised that a person’s susceptibility to cancer varies with ethnicity and age. For example, Asians are thought to be less susceptible compared to Caucasians or Africans, in whom certain cancer-linked genetic mutations and alterations are more common. However, Bushra is perturbed that very little is known about mutations and alterations carried by people within the Indian subcontinent. This is the scenario that her team wants to change.

A cure to cancer may seem elusive. This is mostly because it is highly unlikely that a single medical procedure or drug can treat all types. Cancer occurs due to multiple factors that not only vary with its type but also from one person to another depending on their genetic makeup. Cancer is a heterogeneous disease and is characterised by multiple genetic alterations. For example, the alterations and mutations responsible for prostate cancer in one person may be different from another. Therefore, cancer therapy research today is orienting towards developing more customised drugs and therapies for patients. This is a good move, but for Bushra what matters the most is that the advances made are translated into procedures that would help improve the lives of cancer patients.

Prostate cancer, the focus of much of Bushra’s current work, is the cancer of the prostate gland, a walnut-sized and spherical gland located below the urinary bladder in men. Its function is to secrete seminal fluids, the healthy medium through which sperm is transported. The cancer cells Bushra performs her experiments on, are from American Type Cell Culture Collection – a cell culture repository and supplier of standardised quality cancer cells. First, Bushra genetically modifies the cells in many ways. Her objective is to identify modifications that minimise or completely stop the growth and spread of cancer.

In addition, Bushra also wants to identify the patterns of gene alterations that occur in the Indian population. For this, she associates with hospitals and medical centres, namely Ganesh Shankar Vidyarthi Memorial Medical College (GSVM) in Kanpur, King George’s Medical University in Lucknow and All India Institutes of Medical Sciences (AIIMS) in New Delhi. These hospitals provide her with samples of human cancer tissues that come from biopsies and surgeries conducted on patients suffering from breast and prostate cancers.

Genetic alterations occur when genes get rearranged in some way. Sometimes the region between two genes gets deleted due to reasons that could be both genetic or environmental. As a result, the two genes are fused together. For example, an active gene can fuse with a silent gene, as a result, activating it. If a silent oncogene (cancer-causing gene) gets activated in this fashion, then this could be bad news. Once such alterations are identified, treatments can be devised to block the functioning of such genes.

The IIT Kanpur team is specifically examining the cancer-causing mechanism of a protein called SPINK1 (short for Serine Protease Inhibitor Kazal-type 1). Higher levels of SPINK1 is present in prostate cancer patients who often happen to be negative for genetic alteration. SPINK1 is also thought to play a role in breast and colon cancers. Among the prostate cancer samples tested by Bushra’s team,  15% tested positive for SPINK1. The team also identified the presence of other genetic alterations and gene fusions linked to prostate cancer. They discovered that one such alteration, called RAF gene fusion, was more than twice as common among Indian prostate cancer patients (~5% of Indian patients as compared to only ~2% of Caucasian patients).

In a first-of-its-kind attempt in the Indian sub-continent, Bushra and her team have tested nearly 121 prostate cancer tissue samples and identified several significant genetic alterations. These discoveries have the potential to be translated into effective therapies and treatments. “This was one of the first such discovery from India. It was like a rough check of the prostate cancer cohort in India,” Bushra said. She is confident that the USA Food and Drug Association-approved RAF gene inhibitors that have been widely used to treat melanoma (skin cancer) in western countries can be used in the treatment of prostate cancer patients in India. 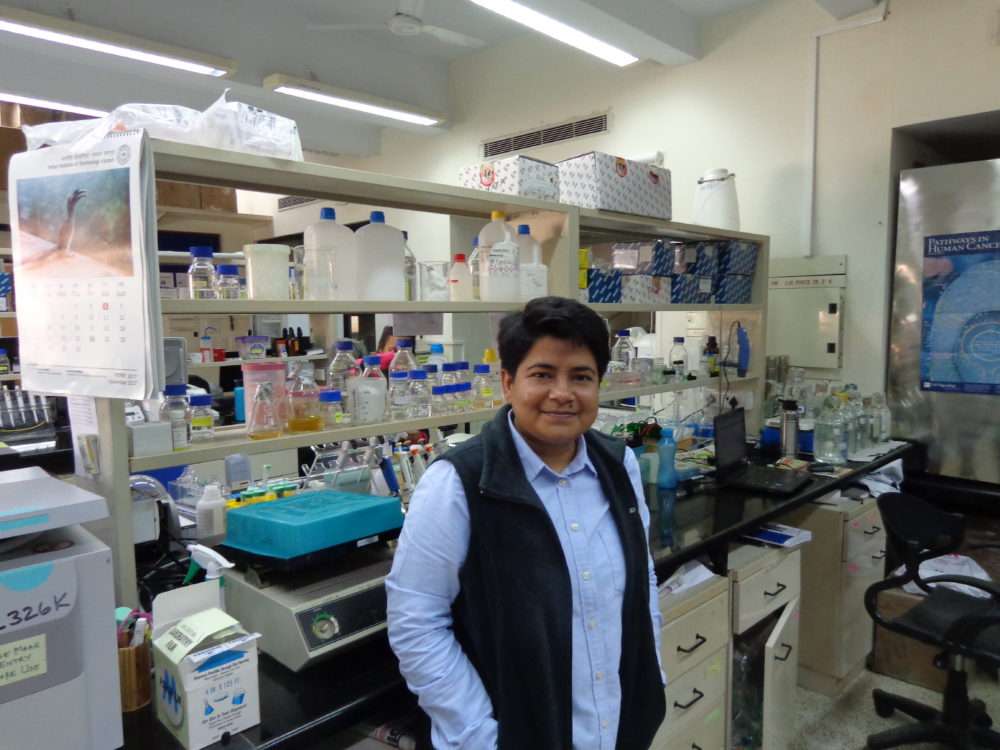 Bushra plans to continue shedding light on the mutational landscape of the Indian population through gene sequencing. Apart from this, she is also working towards developing a non-invasive technique to identify prostate cancer-specific biomarkers through urine tests. The method that is currently used to conduct a biopsy of the prostate gland involves making upto 12 punctures in the prostate gland using thick needles. This is how tissue samples are extracted for testing.“Watching a biopsy take place is so painful, it makes you feel, you should come up with some alternative system of maybe a blood-based or urine-based diagnosis. I personally feel urine-based diagnosis is better as it is totally non-invasive and being the cancer of the prostate gland makes it easier to get a biomarker in the urine,” she explained.

Cancer biology was not always on the cards for Bushra during her research education. Her PhD thesis leaned more towards environmental genetics. She recalled how her interest in cancer biology was triggered while examining catfish chromosomes. The chromosomal aberrations that occur in catfish after exposure to chemicals commonly used in farmlands got Bushra thinking. Could there be similarly disastrous effects of these herbicides on humans as well? “I wanted to look at the effects of these chemicals on people using them in agriculture,” she said. “Looking at chromosomal breakages, the one disease that comes in your mind is cancer.”

So upon finishing her PhD, Bushra began closely working with cancer. She did her post-doctoral research in AIIMS and National Institute of Immunology (NII) in New Delhi and followed it up with fellowships in Canada and the USA to train herself in advanced techniques in cancer research. Armed with this knowledge and expertise, Bushra returned to India in 2013 to set-up her own lab at IIT Kanpur.

In her five years of doing cancer research in India, Bushra has realised that a major part of the inconveniences faced by scientists here is a result of the red tape in academia. Funding agencies take long to process grant applications and the delivery of lab supplies get delayed due to lengthy clearance procedures at customs offices – such hiccups can keep scientists like Bushra in a limbo.

However, more serious for Bushra is the difficulty in sourcing human cancer tissues from local hospitals and clinics. This involves getting ethical clearances, and sometimes the process for this is tedious for her. As per protocol, patients have to sign consent forms informing them of why, how and where their tissue samples would be used. However, Bushra has noticed that hospital staff and clinicians tend to see this as an extra burden and therefore hesitate to discuss the topic with their patients. Applications for ethical clearances, hence, tend to involve large amounts of paperwork and often result in dead-ends.  “My students end up waiting for hours outside a hospital’s operation theatre to get tissue samples from surgeries and biopsies,” Bushra lamented. According to her, this problematic system is why she has not been successful in procuring cancer tissue samples representing a wider geographical area.

Another hurdle for researchers like Bushra is the lack of medical data on cancer patients. “In the west, they have proper follow-up records of patients. For example, when did they drop the treatment, how did they respond to medicines, and MRI information…” She rues that India lacks the systematic way of recording and filing information related to the patients’ treatment and their subsequent response to it. This is especially challenging, she is aware, because of the mobility of patients. Patients come from far corners of the country for surgeries, chemotherapy or radiation treatment available in large hospitals, and return to their homes as soon as the course is completed. Follow-ups are often not done and information on whether the patient survived or how long they survived after the treatment is therefore unavailable. “Databases in hospitals need to be modernised,” emphasised Bushra. Her experience has made it clear that updates from patients tremendously accelerates research and allows cancer researchers in India to new treatments accordingly.

A healthy atmosphere for all scientists

Bushra praises IIT Kanpur’s unconventionally non-bureaucratic environment for giving her the freedom to conduct research and forge collaborations without any interferences. This, she believes, is most important for a scientist. “It’s the best place to be in India,” she said. “The environment is very friendly. I can walk to the Dean’s office with a problem, and they will try their best to resolve the issue. I can approach even the Director and they are always ready to help.”

“I think I am just a scientist,” stated Bushra, expressing her distaste for the label ‘woman scientist’. She recalled no instances either at home or at work, where she felt disadvantaged as a woman. For this, she credits the liberal upbringing she received from her parents and the support of her friends and colleagues. However, she later recalled an unpleasant incident that occurred during her days as a graduate student at Aligarh Muslim University (AMU). During a conversation about career plans post-PhD, a male friend and colleague suggested, to Bushra’s surprise, that she would be better suited to take up a teaching position at a local undergraduate girls’ college, whereas he was a more suitable candidate for a research
position at the university. “The mindset was such that the university set-up is more research-oriented and therefore more suitable for men whereas, it
is more appropriate for a woman to go to a women’s college and do undergraduate teaching.” Obviously, Bushra paid no notice to this. She advises young girls and women to remain focused on their goals, remain persistent and not let criticism get in the way of success.