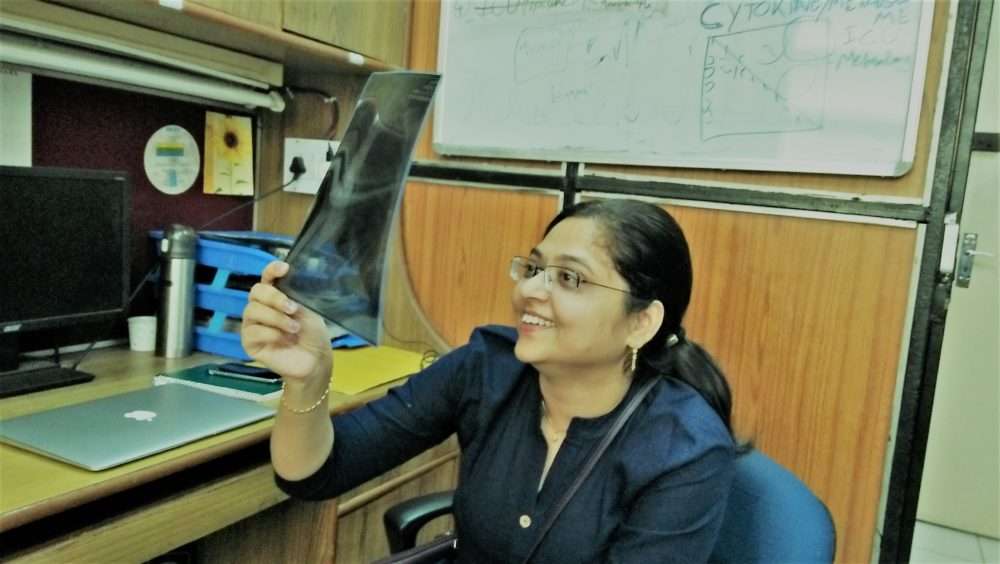 WHERE? All India Institute of Medical Sciences, New Delhi

Blood. The word brings to mind a number of things such as pain, wound, injury, infection… For some, blood is a symbol of life; for soldiers it is a symbol of patriotism; for patriarchs, it is a means of their endless survival and continuity. However, for biologists and clinicians, blood is both a reflection of as well as medium for the inner workings of the body. It is like a CCTV camera that captures all that is going on in its vicinity. For a tuberculosis patient, blood profiles are a clue to how the body responds to a bacterial infection and reacts to drugs.

Families and relatives of patients waiting in the park opposite the teaching block at AIIMS.

It was a hazy November morning in Delhi. I was enroute All India Institute of Medical Science (AIIMS), the premier medical establishment in the country, to investigate the research and development of blood-based tests to manage TB treatment. Paving the path for this is clinician-scientist Aparna Mukherjee who works in the Department of Paediatrics.

Teaching block at AIIMS. The electric gate protected by the security is the popular landmark.

For the last ten years, studying tuberculosis has been an important part of Aparna’s life, both as a clinician and as a researcher. She puts on her doctor’s shoes two days a week, treating infants and young kids in the outpatient department. For the rest of the week, she works as a researcher at various laboratories here. Aparna’s research lens is focused on developing a simple blood-based test that can measure drug response and help monitor the outcome of TB treatment in young children.

Not easy for a child with TB

“Paediatric TB is a grossly neglected area of medicine even though it accounts for about 10 to 12% of the total load of TB”, said Aparna. And even this, she believes, may be an underestimation since many cases are not reported. Paediatric pulmonary TB cases come with symptoms such as cough and/or fever for more than two weeks and poor appetite with weight-loss or lack of weight-gain. “Since the physiology of children is different from adults in many ways, treatment and management of paediatric TB does not mirror that of an adult patient,” she pointed out.

Usually, TB is diagnosed by testing sputum, the gooey liquid produced in cavities of the lungs, which are involved in exchange of gases. The bacterium Mycobacterium tuberculosis which causes TB, grows in these cavities on the sputum. Childhood TB is ‘pauci-bacillary’, meaning the sputum contains very few bacteria due to lesser number of cavities in young children compared to adults. Thus, it is difficult to diagnose a child with utmost surety and many cases remain unreported.

“Microbiological confirmation (where M. tuberculosis has been detected) using sputum in children successfully identifies only 40% of cases and latent infection often goes undetected,” said Aparna. A latent infection is when a patient has very few bacteria in the body, tests negative for the sputum, and cannot pass on the bacteria to another person. Latent infections may convert into an active TB disease later on in life. “For these 60% of the cases, we have to rely on radio-clinical examination and testing skin for tuberculin, a protein of the TB bacteria,” she said.

Obtaining the sputum is another difficulty with children, as they tend to swallow it rather than spit it out. In such cases, explained Aparna, we have to draw the sputum from the stomach – this is called a gastric aspirate. In certain cases, the clinicians induce sputum production. The process involves nebulizing the child by giving them a saline solution and then engaging him in physical activity. After this, a tube is inserted through the nose and the induced sputum is withdrawn.

These invasive procedures can be uncomfortable, even traumatic, for children. Blood-based tests would help ease this discomfort. “If standardised, blood assays will help overcome the dilemmas associated with empirical therapy based on educated guesses whose reliability depends on the clinician’s experience,” she said. When the available information is inadequate, a  clinician may have to fall back on their experiential wisdom, and this can be risky. Blood-based assays will give a more accurate and real picture of the infection.

How much drug to administer to a child?

Drug-based treatment of any disease is only effective if the dose is accurate. A slight deviation in drug dosage may result in slower or unexpected recovery outcomes. “It is important to realise that the dosage of drugs for children are extrapolated from adults,” Aparna said with deep concern. This neglect in young patients’ dosage standards led her to do her PhD in pharmacokinetics, the study of drug dosage and drug concentration in blood, for children undergoing TB treatment.

For her current research to develop blood-based tests for TB infected children, Aparna will recruit 320 children infected with TB; 50% of them suffering from pulmonary (infection in lungs) TB and 50% of patients with extra-pulmonary TB (infection in other organs). She wants to look at specific molecules that are released in the blood to fight infection. To do this, she will need to draw blood from patients at various time points during anti-tubercular therapy. These children will be monitored for response to drug treatment and relapse after treatment for 24 months.

The next step would be to add mycobacterium proteins to the individual blood samples in a tube. By measuring what happens when the blood in the tube mixes with the bacterial proteins, Aparna can guess how well the drug therapy is working. “Blood based assays will help us to predict the outcome of the TB treatment in children; differentiate between latent and active TB; provide early information on possibility of disease relapse,” concluded Aparna.

Journey on the clinician-researcher path

For Aparna, studying medicine was a natural choice. She recalled, “I grew up in a small town of Jharia in Dhanbad district of Jharkhand. Around me, the fields of medicine and engineering were worshipped among students. In my family, both my father and grandfather were physicians. I was the youngest of all siblings, and my eldest sister noticed my interest in biology and motivated me to pursue medicine”.

She moved to Medical College, Kolkata, as an MBBS fresher in 1998. She went on to choose paediatric medicine for her postgraduate specialisation. During these years, Aparna got interested in research and signed up to help out in some projects. “I worked on a project focused on hepatitis B vaccine research, and another one on HIV. My involvement was peripheral and most of the work was data collection. Whatever it was; I liked being a part of it,” she reminisced fondly.

Her research life took off when she moved to Delhi after completing her MD degree. “Delhi is a city of opportunities. Also, my husband was in Delhi, so I chose to move here.” Aparna’s husband Kaushik Sinha Deb is a faculty at AIIMS and was her batchmate during her undergraduate years.

Aparna believes that her marriage was a blessing in disguise for her career. “If I had stayed in Kolkata probably I would have taken up senior residentship.” Residentship (practicing as a MD) for few years is the traditional step followed by most on completing MD. However, the short term research experience during her MD had made Aparna hungry for more. She decided to tread an unconventional path. “I explored research opportunities after coming to Delhi and joined as a Research Officer in Department of Paediatrics, AIIMS, in 2007.”

AIIMS, with its research-conducive environment and infrastructure, was indeed a turning point in Aparna’s life. Here, she really started to get her hands dirty in clinical research.  “One would know if they are interested in research only after getting exposed to it”, she reflected. Her two years of research experience opened her eyes to the impact clinical research would make in a clinician’s practice. Eventually, she signed up for a PhD in 2009 at the department she now works at.

One of her nomadic abodes: Aparna with a fellow researcher at the HLA lab Room number 92, Department of Transplant Immunology and immunogenetics section.

So where was the laboratory where all this work happens, I asked. “My laboratory?” exclaimed Aparna, amused. “I work in many labs. I go to Dr. S.K Mitra’s lab for all my immunology-related work; Dr. Velpadiyan’s lab is my home for pharmacokinetics; Dr Madhulika Kabra’s lab is my abode for all the molecular biology based work… Doctors are used to this nomadic situation going from one bed to another in the hospital ward for their regular work”, Aparna said with a smile.

During her MBBS days, Aparna recalls a third of the class being female. In her MD days, about 50% of the batch comprised women. “I don’t remember a single event when I could consider myself being a target of gender bias, neither at home nor at workplace. It might be partly due to the fact that we do not have kids.”

The only adjustment which Aparna had made so far due to her marital status was geographically confining herself to Delhi.  “My husband and I have stayed in different cities for the sake of degrees and jobs, but now I would not want to relocate alone to a different city. So, that does impart a geographic constraint to my job opportunities.” Nevertheless, Aparna is content. “We function as a team. Kaushik helped me embark on the unconventional career path involving prolonged training and uncertainty in terms of job security.”

The clinician-scientist career path is something Aparna cherishes being on. She encourages more opportunities for medical students to enter clinical research. “Right now of the total number of PhD students that we have in AIIMS, only 3-5% come from a medical background”. She hopes her research will inspire a few of the medicine students to come and join the research bandwagon.