Vigyan 2030 is an initiative by India’s Department of Science and Technology (DST), announced in April 2017, to address gender parity in STEM fields. As part of the Rs 2,000 crore programme, DST’s KIRAN (Knowledge Involvement in Research Advancement and Nurturing) division is planning various activities targeting girls of different age groups to increase the number of women in STEM careers. Under the slogan ‘catch them young’, they recently organised residential camps for high school girl students at several IITs and IISERs. IIT Jodhpur was one of the nodal centres for this unique three-week camp which lasted from May 14 to 2nd June. We had a chat with Dr Priyanka Singh, Assistant Professor at IIT Jodhpur and nodal officer of the programme at IIT Jodhpur.

Priyanka moved to India from Germany and started her own lab at IIT Jodhpur in 2017. During her postdoctoral research at the Max Planck Institute, she was actively involved in the discussions and activities to create a healthy work environment for women scientists. This topic is close to her – and according to her, to most women in science. Naturally, she was glad to be appointed the nodal officer for the event at IIT Jodhpur. She believes that a real difference can be created by educating girls about available career options at an early age by empowering them to question stereotypes.

For the pilot programme, IIT-J organised the event with five themes: role models, society & life, health, competence, and profession & life. Priyanka planned and coordinated the whole event. “Our aim was to give the participants a close view of the life of scientists,” she said.

To select the students, the organisers asked the headmasters of local government schools like Kendriya and Navodaya Vidyalaya to nominate girl students of class XI and XII on “merit-cum-means” basis. Priyanka said that getting students to enrol for the programme was not an easy task.  “Initially it required some convincing, as the workshop coincided with the holidays and the students were busy in various coaching classes for competitive exams. However, we eventually got a good response from some of these schools.”

It took a year of planning and preparations before the programme finally started, so there was a lot of excitement and enthusiasm from several faculty members, staff members and students of IIT-J, said Priyanka.

A session about microscopy

A typical day during the workshop started with students visiting a department at the institute and attending lectures and hands-on activities there. The idea behind this was to enable the school students to have in-depth conversations with faculty and students across departments. Priyanka believes that these lectures strengthened the conceptual understanding of students and this will help them perform better in entrance examinations such as IIT-JEE.

With the mornings packed with academic activities, Priyanka thought it would be good to devote the evenings to more informal and fun activities. On one such evening, they played a video series followed by a discussion about women scientists in India. A copy of the books “Lilavati’s Daughters” by Indian Academy of Sciences and “The Last Lecture” by Randy Pausch was gifted to all the students. “We wanted the students to think about these things even after the course ends and they are back home,” she said.

Priyanka told us fondly about a ‘micro-book (pocket size miniature books) writing competition’ that was held during the event. She was amazed at the kind of perspective and understanding the young girls displayed while writing these ‘micro-books’. At the same time, she found herself wondering where is all this creativity and energy is lost as students progress in higher studies.

To emphasise the importance of overall health and well-being beyond academics, IIT-J organised yoga sessions, soft skills training, as well as drama sessions themed around women empowerment and stereotypes. This was organised with the IIT-J students, giving younger girls the opportunity for informal interactions with students on campus.

According to Priyanka, the participants were also taken to nearby research institutes like Defence Research and Development Organisation (DRDO), All India Institute of Medical Sciences (AIIMS), Central Arid Zone Research Institute (CAZRI) Jodhpur where they had a chance to interact with doctors and scientists and see the facilities in these institutes up close. 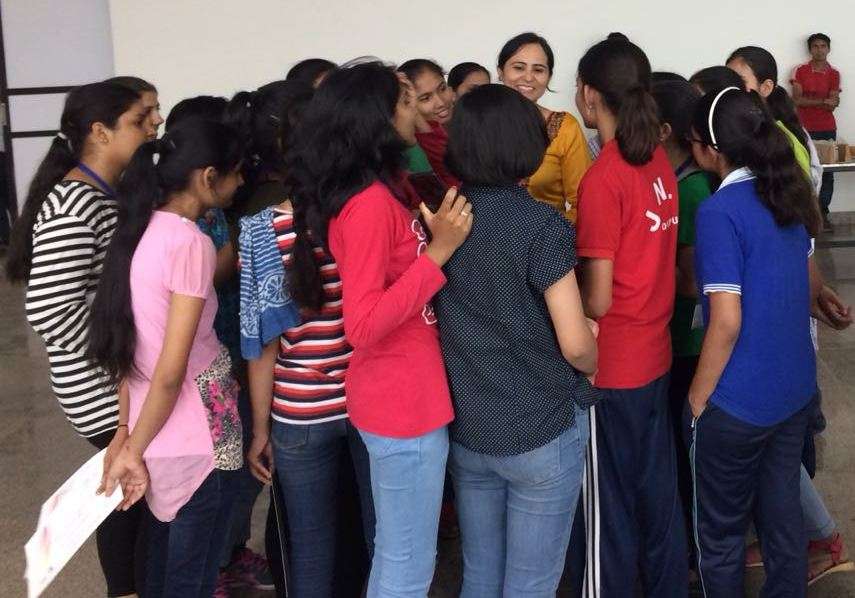 The closing ceremony of the event- Excitement of students knows no bounds!!

To the organisers, the students seemed to respond very positively to the workshop. “I could observe some change in the students after the workshop. For example, in one of the sessions, we showed them advertisements that depicted stereotypes. By the end of the session I noticed that students could recognise subtle forms of stereotyping and how it could limit their potential,” said Priyanka.

She shared a memorable response of a participant Tuhina Debgharia from Kendriya Vidyalaya No. 2 AFS Jodhpur: “The Vigyan Jyoti Programme encouraged me in thinking and discovering new ideas that can help me in my higher studies.” Priyanka said that she has compiled all the responses, worksheets and pictures into a detailed report which she plans to send to the DST. “Since this was a pilot programme, a detailed assessment will be helpful in guiding the events in future.”

For organisers of future events like these, Priyanka recommends an additional session. “I will suggest keeping a few mandatory sessions where parents should also take out time and get involved in encouraging their child for a career in science and technology.” She stressed that it is vital for parents to work together with the education institutes for the long-term success of any such intervention.

It’s a very good initiative, a much needed to our country, specially na everyone is thinking of computer technology alone…. Motivating Encouraging the children in research will be good for the country … a new India in 2030….The Auther has done all the good work to share this to public in general and all parents in particular…..

It’s great motivation for girls… I’m from Pune, 9th class student … From where we can get such information to participate well in advance … Kindly request to send authentic source of information, contact number, etc

Hello Aarya,
I would recommend that you make a twitter account and then follow the accounts of local science institutes in Pune (IISER, NCL, IUCAA etc.) and also other science journalists. That will keep you well informed about such activities and you can always request to join the programme in your personal capacity if your school is not as involved.