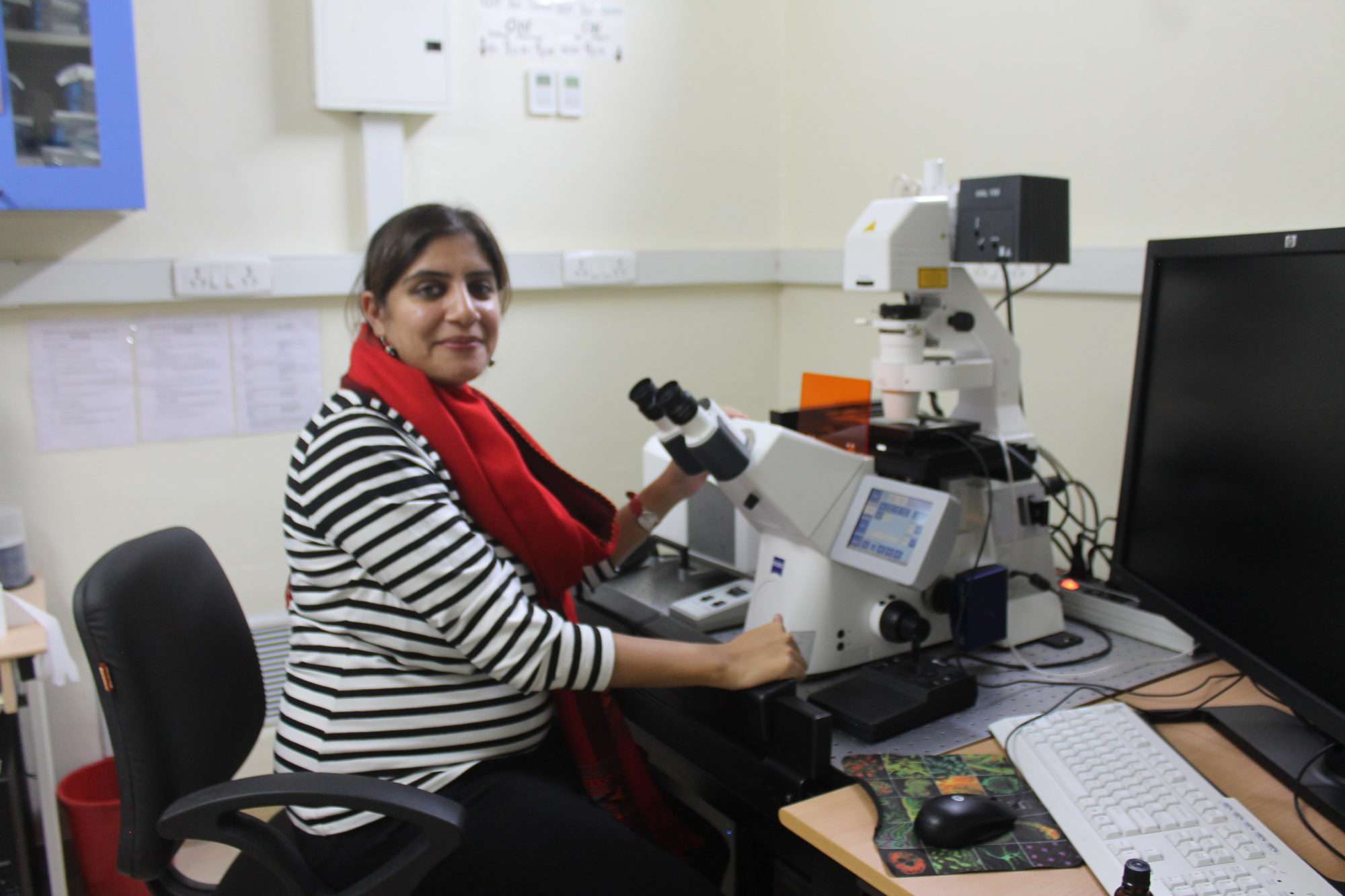 As I land, Chandigarh’s unique geometric orderliness is striking. India takes pride in this great ‘planned city’ that is organised by grids of roads into sectors to make transport more efficient and prevent traffic jams.

Coincidentally, I was in here to meet someone who studies transport organisation of a different kind. Mahak Sharma, a cell biologist and Assistant Professor at IISER Mohali, studies membrane trafficking pathways in the cell. This refers to the way cargo is transported into and around the cell from one compartment to another.

The picture of a cell we see in our mind is probably similar to the schematic in most school biology textbooks, where all the organelles seem static and inert, floating in a clear goo. But the real picture is a lot more complex and dynamic.

Imagine a busy space city, a bubble in the ether with cars carrying all types of cargo speeding about on roads in and out of floating buildings, all criss-crossing each other inside the boundary. But in the cell city, the vesicles (cars) carrying proteins (cargo) move in and out of organelles (buildings), on microtubule tracks (roads), forming or fusing with other organelles or the membrane of the cell. The exchange of proteins and other material through vesicles is how organelles in the cell communicate with each other.

“I’m particularly looking at how cargo is delivered to lysosomes,” said Mahak, referring to the organelle that acts as the recycling plants of our cells. “They receive cargo and degrade it into constituents that are recycled and used for other purposes.”

The transport of recyclable cargo starts with the vesicle or the “cars” budding off from the cell membrane, almost like a bit of clay being pinched off a larger block. Once they are pinched off, they are picked up by motor proteins, which behave exactly as their name suggests. Think of motor proteins as trains on a track. The motor proteins carry their cargo along the microtubule tracks.

Faults in the machinery

Different cargo-carrying vesicles have the ability to fuse with each other or with other organelles so that they can use enzymes present inside. For example, if a vesicle fuses with a lysosome, the organelle Mahak is most interested in, their cargo of proteins will be degraded by the enzymes in the lysosome. All proteins broken down into amino acids – the building blocks of the cell that can now be reused.

Each step of this process of recycling is controlled by multiple proteins. This regulation, stressed Mahak, “is very important to study, because the mutation of even one of them could result in embryonic lethality (the death of the organism in the embryo stage) or a shortened lifespan.” Indeed, several human genetic disorders such as Tay-Sachs disease and Gaucher’s disease are a result of a mutation in the transport machinery.

Random mutations are not the only threat. So are pathogens. Famous examples are Mycobacterium tuberculosis (which causes TB) and Salmonella (responsible for typhoid and gastroenteritis). Usually, the lysosome defends a cell by fusing and neutralising invading bacteria, but as Mahak pointed out, “Previous work has shown that Salmonella can survive this attack by manipulating the host’s machinery such that the lysosomes are devoid of the required enzymes. The same machinery that plays a role in the recycling pathway is used by the pathogen to survive in the cell.” In other words, the microbes hijack the normal cell transport machinery and use it to steal nutrients from the cell.

Mahak’s lab observes such phenomena by purposefully altering cell pathways and looking for changes in the recycling machinery. If the mutated cells show a change, then it indicates the role of the mutated pathway. If reinstating the original pathway reverts the cell back to its original behaviour, then the function can be confirmed. There are hundreds of interactions and associated pathways in any cell so there is a lot to be understood. “One can spend a lifetime studying just one step,” Mahak said.

Science in the family

Mahak credits the cultivation of her interest in science to her mother. “She was a gynaecologist, but she had many other interests. She was fascinated by nature, and she would demonstrate to me and my sister when we were young children, what the retina in the eye of a goat looks like or how the lungs work. She really demonstrated these to us using live models!”

This early exposure seeded Mahak’s fascination with the life sciences, and eventually led her to do her undergraduate studies in biotechnology at the Guru Gobind Singh Indraprastha University in Delhi in 2004. She went on to pursue her Ph.D. in the University of Nebraska, USA, under molecular biologist (and novelist) Steve Caplan. “I had a lot of great interactions with him. Watching and learning from him really increased my motivation to do research.” It was there that she began her work in the field of lysosomal pathways and their machinery.

The success of an early publication in her PhD days provided Mahak an extra confidence boost. She began to develop research questions of her own. “It was then that I realised that research was a fantastic way of spending my life,” she said. To this day, Mahak urges her students to watch out for those joyous moments of discovering something unknown because those moments, she believes, are what will offer them the inspiration to continue working in a field where nine out of every ten attempts fail.

During her PhD, Mahak also got to collaborate with other labs. This gave her the taste of areas like immunology and experience using model organisms like the worm C. elegans. Moreover, the publications that resulted improved her profile as a researcher. So impressive was her body of work, that she received the 2010 ‘Thomas Jefferson Ingenuity Award‘, a prestigious achievement bestowed on only a single graduating PhD candidate in the entire college for “exhibiting unmatched creativity in their doctoral research efforts”.

Support in the cell

Some of Mahak’s collaborations in those days were with the lab of her soon-to-be husband, Amit Tuli. Their journey together had begun further back as classmates in a college in Delhi. After their undergraduate degrees, both went to the same university in Nebraska for their PhD and in the third year of their degree, they got married. Even in their early years of marriage, Mahak describes their relationship as academic as it was romantic. 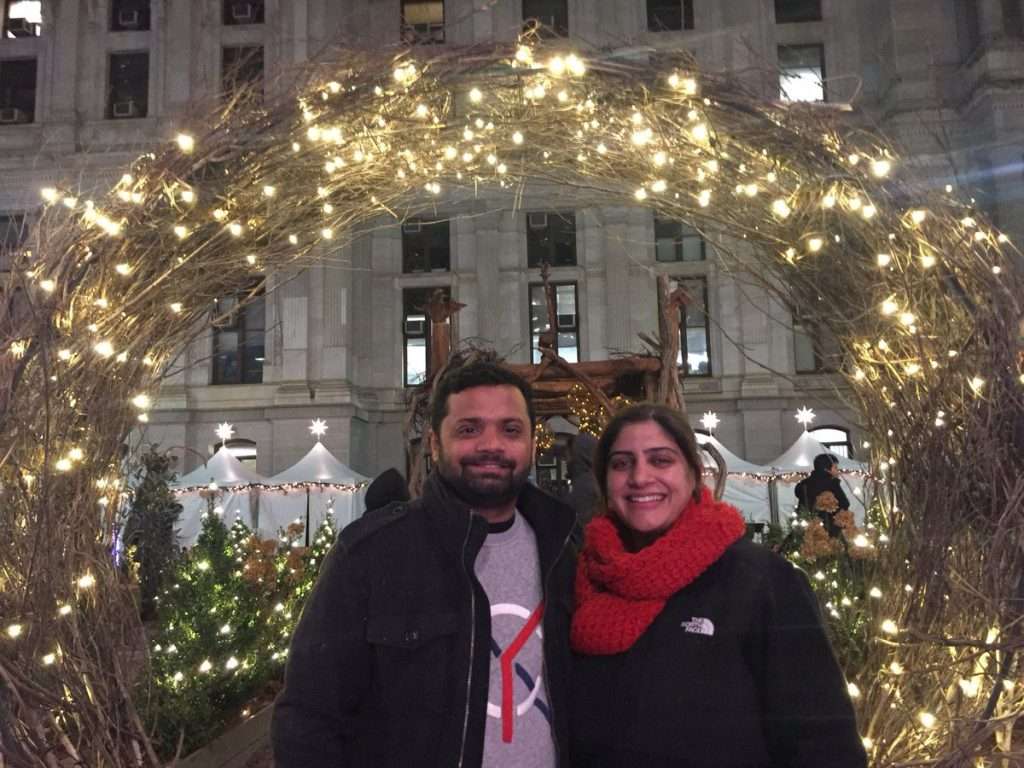 Mahak and Amit started collaborating because the techniques she had developed allowed his immunology lab to explore their subject further. “It was a very fruitful collaboration,” she admitted, smiling. “We understood each other, we loved working with each other, and I think that it benefitted everybody including the mentors.” The amalgamation of their fields of cell biology and immunology also resulted in publications that cemented their relationship and their careers.

Today, Amit too is a senior scientist at CSIR Institute of Microbial Technology in Chandigarh as well as a India Alliance Wellcome/DBT Intermediate fellow like Mahak. Their case is interesting because it was Mahak who was the first to receive a faculty appointment in a particular city before Amit followed her. “Yes, his decisions have been influenced by (my career), he has tried to fit in where I have, even though I have taken the lead in finding the job. Obviously, he was always helping me make these decisions.”

Echoing most of the scientists interviewed on thelifeofscience.com, Mahak insisted that one cannot take up this challenging profession without the support of the people closest to them. “Running a lab, writing grants, teaching, administration – it gets overwhelming. And the (support of spouses) is a must.” She also recounted a number of benefits of having a spouse in science. “Even if I go home,” she said earnestly, “the science never ends. We have other varied interests as well, but science tops this list.”

The feeling of responsibility

There are pressures that are weigh heavier on female faculty than on their male counterparts, found Mahak. “Generally, women have a tendency to feel more responsible for the family – taking care of the kids, taking care of the household… Women cannot get rid of that feeling, but they also want to progress in their careers. For this, the other partner has to step up, he has to be highly supportive of her progress, and both partners have to share the responsibilities at all fronts.”

She reckons that this is true for a lot of her female colleagues –  though there are not all that many. In the roster of twenty two faculty members in the biology department at IISER Mohali, only eight are women (~36%). Yet, Mahak is relatively pleased about this, because according to her, “A similar gender ratio is not present in other departments of IISER Mohali. And obviously,” she continued, “the same gender ratio is not at all present in institutions like CSIR IMTech,” where her husband works and where the numbers are heavily skewed towards males. 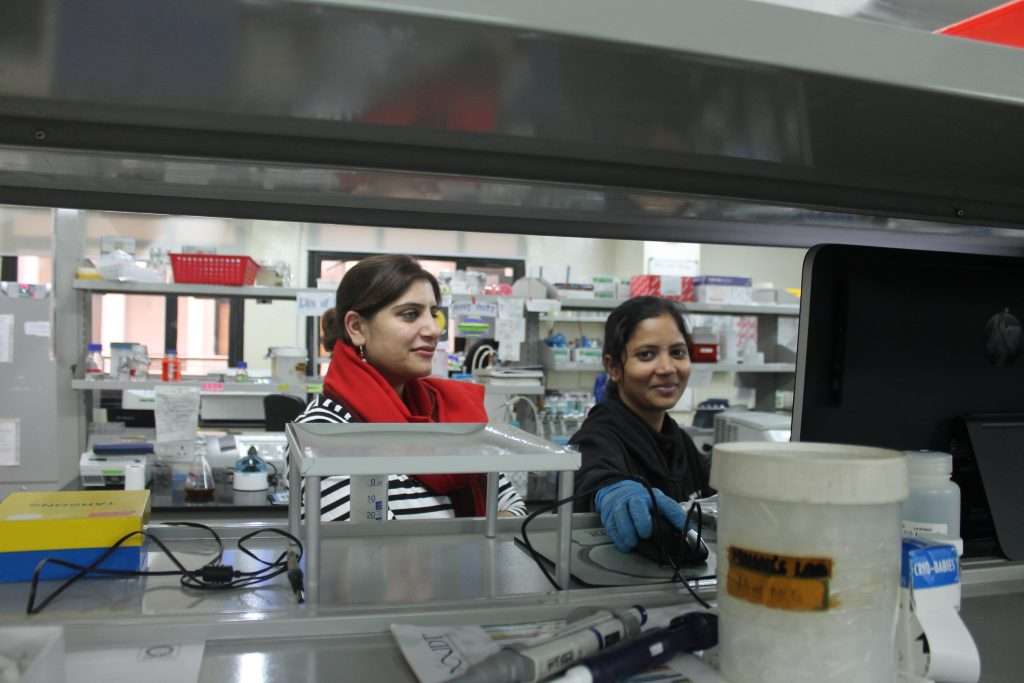 During her graduate studies, Mahak recollected that more than half of the Indian students that entered the PhD program were females. However, to her knowledge, not even one is pursuing research professionally today. “Somewhere along the way, they have dropped the idea of having a career,” she mused. Her observation, both among her contemporaries and now her current graduate students, is mirrored in national statistics, too. Despite almost 40% of India’s female PhDs being female only about 10% go on to do professional research.

Mahak believes that things could be different if someone encouraged PhD students to just “jump” into science and give it a shot. The challenge of managing a career and family life may seem daunting, but Mahak is firmly against the perception that both of these things cannot be managed at the same time. “It’s very important to break this perception and convince people that we can do this,” she concluded.