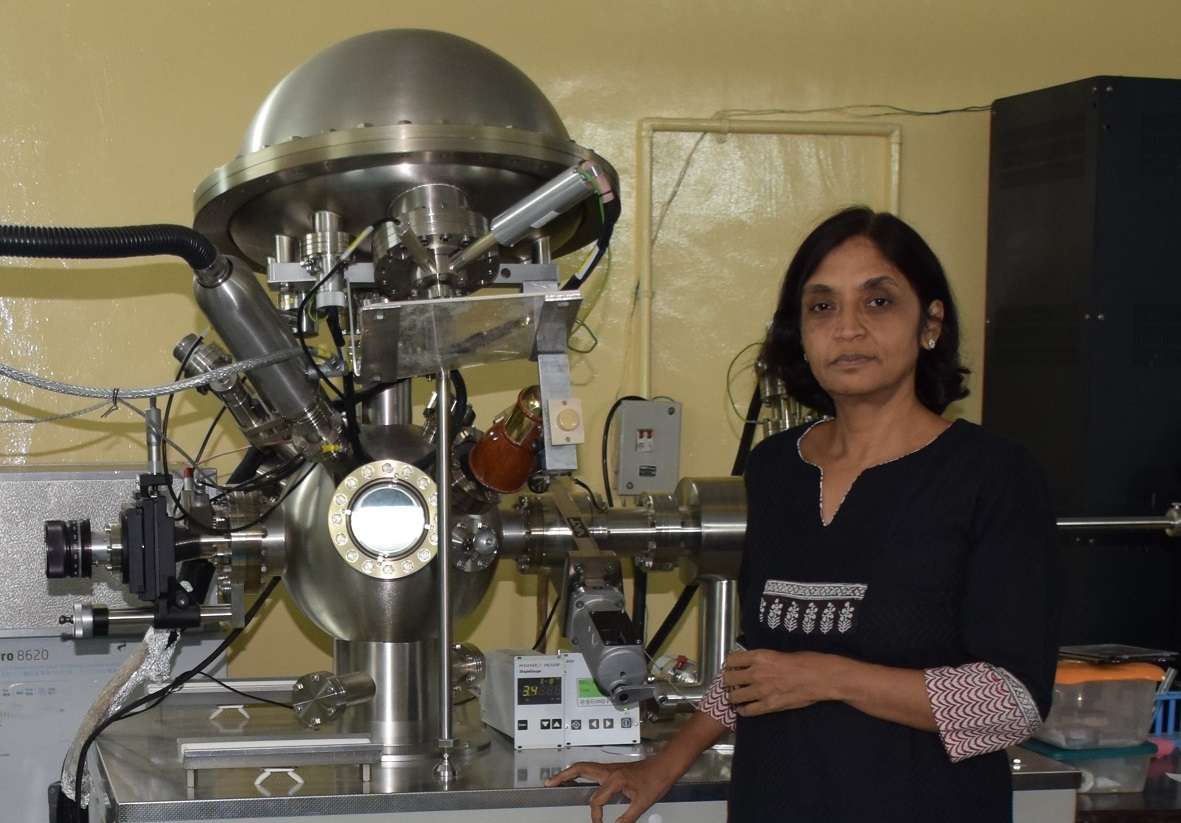 WHERE? Institute of Physics, Bhubaneswar

Shikha Varma fell in love with experimental physics while doing her Masters in IIT Kanpur. “We had a course by Prof GK Mehta on ‘experimental methods’ which was very good. He didn’t just talk about techniques, but took an approach where he would make us spend 10 days in specific labs, and learn what goes into doing experiments there. We got our hands dirty. That experience was very special,” she recollected in an interview at her office in Bhubaneswar’s Institute of Physics, a research institution funded jointly by the Department Of Atomic Energy (DAE) and the Government of Odisha.

Evidently, her professor’s approach worked, because Shikha never looked back. More than 30 years later, as a professor of physics at IOP, she remains as ardent an advocate of experimental science as she was when she started out in the early 1980s. Her fondness for getting her hands “dirty” comes handy in in her field, surface science, a branch of condensed matter physics which involves the use of various heavy equipment and complex technology. ‘Surface’ here refers to the topmost atomic layer of any material. This layer, which can be up to several nanometres (that’s one thousand-millionth of a metre) thick, is what determines many of a material’s properties – from its appearance or its conductivity to the manner in which it will interact with other types of matter.

Shikha with a student in her lab

Altering a material’s surface can cause it to behave very differently. Shikha brought up the example of gold, otherwise known for being non-reactive, becoming highly reactive in thin nanoparticle form. Surface science discoveries have tremendous applications – from the paint industry (‘how exactly will a paint interact with wood to give it fine or matte finish?’) to electronics (creating devices with better magnetic properties).

Shikha described a memorable study performed in collaboration with biotechnologists at the neighbouring Utkal University: “They gave us some circular plasmid DNA. We interacted DNA with mercury and studied what happened within those few angstroms (10-10 metres) or nanometers (10-9 metres).” The techniques she uses are so precise that it was easy to understand where exactly the mercury is, in what way is it interacting with the DNA and what chemical reactions are taking place. “We saw that on interaction with mercury, the circular DNA becomes linear. So this piece of DNA, which is relatively cheap and easy to make, can be used as a mercury sensor. Small contents of mercury can be detected by seeing if DNA is linear or not. We can also get an estimate of how contaminated water is,” she said.

To illustrate what kind of science these techniques can enable, Shikha told me about another study her lab performed more recently on energy materials. Her team discovered that by changing a property called the ‘band gap’ of the semiconductor Titanium oxide (TiO2), they could enhance its properties such that they make better-performing solar cells. 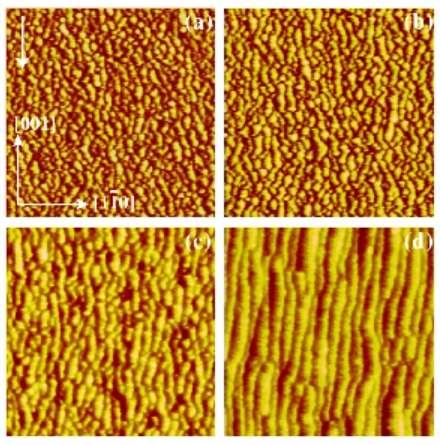 The team was able to alter the band gap of TiO2 by bombarding on it a beam of Argon ions. They observed that this caused the oxygen atoms in TiO2 to get sputtered out, creating what is known as ‘oxygen vacancies’. Additionally the surface of the TiO2 transforms into a Titanium nanostructure form which has contrasting properties from its regular form. Because of these changes in the surface level, the bombarded TiO2 is now able to absorb a wider wavelength range of solar radiation.

The importance of a long PhD

Many of the instruments Shikha and her peers use cost crores of rupees and require months, sometimes years, of getting used to. It is common for a PhD in this field to take six to seven years. “First year is just coursework, then they have to decide which area to join. It takes at least two years to just learn how to use instruments, then they learn the technique, how to analyse…” And that’s not all. Shikha is particular that her students have a worthy list of publications to their name by the time they leave. This is their best shot at competing in the modern scientific world.

Unfortunately, things aren’t working out so smoothly. There are compulsions that students finish their PhD in five years or else their regular fellowship stops. This, she believes, is putting undue pressure on students to somehow scrape by. “Five years is very little time. Sure, if you want them to do something, publish just one paper and get out, they can do it in three to four years. But not if you want them to become a fully-trained scientist who will get a scientific job, a postdoc position…” she said emphatically.

Five years is very little time… if you want them to become a fully-trained scientist who will get a scientific job, a postdoc position.

This policy is even more inconvenient for students who come from disadvantaged backgrounds, and there are a significant number of them in IOP, according to Shikha. “One student of mine was repairing punctures in a cycle shop before he came here. It’s remarkable of them and their family that they ended up in such a premier institute. But for these students who send most of their salaries home, almost no fellowship after five years is very demotivating.”

Shikha is grateful that she faced no such pressure in the US where she did her PhD. “I finished it in six years but I could have taken longer if I wanted to.” Being a daughter of an engineer, she imagines that that must be where her initial interest in science emerged. Though her native town is Fatehgarh in Uttar Pradesh, she grew up in Delhi, Kanpur and Bikaner before returning to UP to join a women’s college in Lucknow, to do her BSc in Physics. From there she went to IIT Kanpur to do her Masters degree.

At IIT, she met her future husband Ajit Mohan Srivastava, who was a year senior. The two secured PhD positions at Syracuse University in the US and left after getting married. It was here that Shikha was introduced to surface science. She followed this up with postdoc positions at Case Western Reserve University, University of Wisconsin-Milwaukee and a stint at Santa Barbara; for most of these years, the couple lived separately. Then she returned along with her husband to India after they were lucky to find jobs in IOP together. 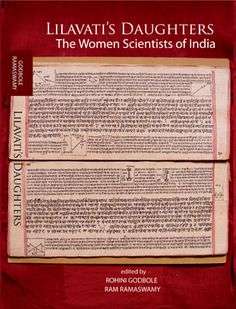 In her essay in the book Lilavati’s Daughters, Shikha makes her disdain for the ‘two-body problem’ clear: “Fortunately, both Ajit and I got jobs at the same institute. Knowing the problems of several physicist couples, who work at different places, I strongly feel that the unwritten convention at many places of not offering positions to husband and wife together, even when both are suitably qualified, is sapping a lot of energy and motivation from young scientist couples. These decisions are often guided not by stated rules but by the instincts and misconceptions of colleagues who in most cases happen to be male.”

Shikha is unwavering in her opinion that a stint abroad is beneficial to any physicist “just so they can experience the scientific culture and temperament outside”. Nevertheless, she observes that faculty at IOP do make it a point to impart a top-class education to their students. “We spend a lot of time with students and try to break the boundaries that exists between us and them. We need a culture where students are so comfortable that they are able to question all of our actions – in science and in the public sphere. They should questions us and we them. They should develop as complete person, not just in science, in personal life too.”

We need a culture where students are so comfortable that they are able to question all of our actions – in science and in the public sphere.

Though Shikha is highly appreciative of the courage students show by pursuing research in the light of difficult circumstances, she is sorry about how ill-prepared most are for experimental work. “Experimental culture in India is lacking,” said. “In many schools they don’t do any experiments but when the examiner comes, every student has a book full of experiments. Right from the beginning, we teach our children to think that experiments are not useful. Experiments cost money, but not so much at UG and school level! Applications and patents are good, but for that importance has to be given to experimental science at the foundation level also.”

Echoing theoretical physicist Indumathi D., Shikha blamed this on our country’s brahmanical culture. “Somehow experimental fields get looked down upon. We are encouraged to not use our hands, but apply our minds more. Even after so many years of independence, we still don’t have so much manpower doing experiments in India – not in all areas. Right now IOP has seven experimentalists out of 30 faculty members. But HRI Allahabad, MatScience Chennai, they are all completely theoretical.”

Shortly after Shikha joined IOP in 1994, the only other female faculty member left the institute. For the next 23 years she remained the sole female representative. Only in 2016 did the next woman scientist join. Did she ever feel treated differently in all those years? After a moment of thought, Shikha replied: “Men need not be proving themselves every time, they still get the benefits. But as a woman, one has to keep proving herself, that is there.” How so, I probed. “You know how it is… in conferences, you invite your friends, people you are close to… you don’t always get invited for the work you have done. Networking is easier for men because they will have more men as friends, right?” 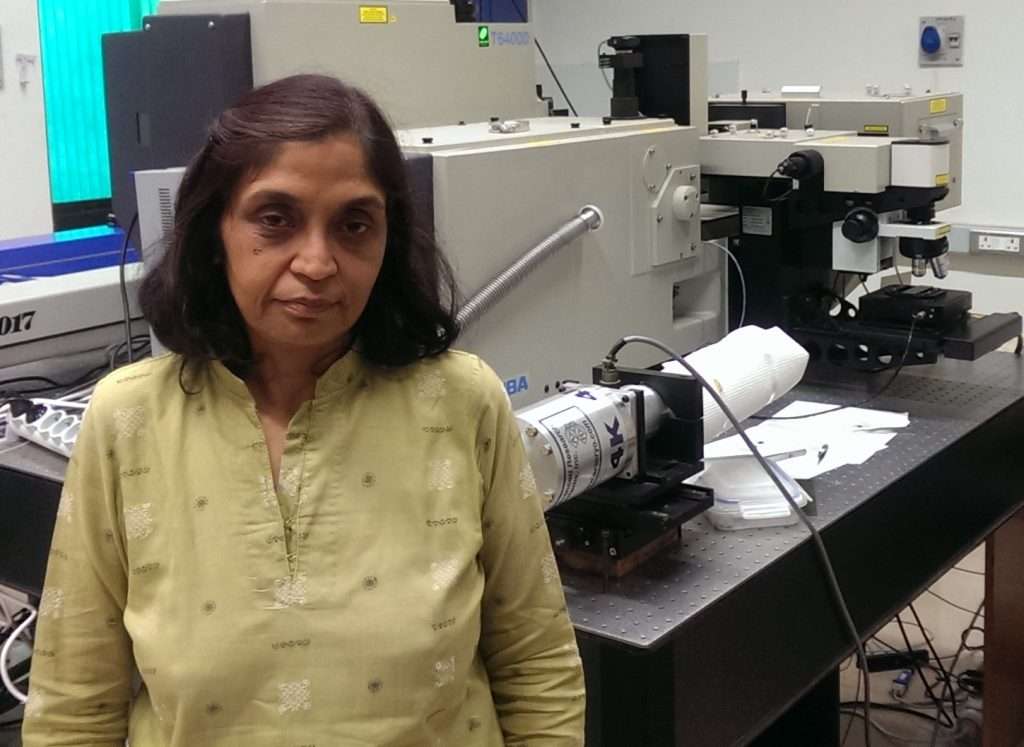 In smaller towns and in non-premier colleges like where she did her undergraduate studies, Shikha worries that students, especially girls, may be languishing without any sort of guidance. She pointed out how she herself only found out about IIT Kanpur’s masters course by a stroke of good luck. To fix this, an idea that could benefit female students of science has been brewing in Shikha’s head for a while. “I think there should be a dedicated programme where female faculty can go and give lectures to UG students in small towns, especially. For example, I would love to go to my home state… I can even talk in Hindi to them.” She hopes that one of India’s science academies take note of her suggestion so that the scenario can change in places where there is potential but no awareness about careers in science.

1 response to "Scratching the Surface with Shikha"

Pingback: Physicists meet to talk gender equity (and some physics) - The Life of Science