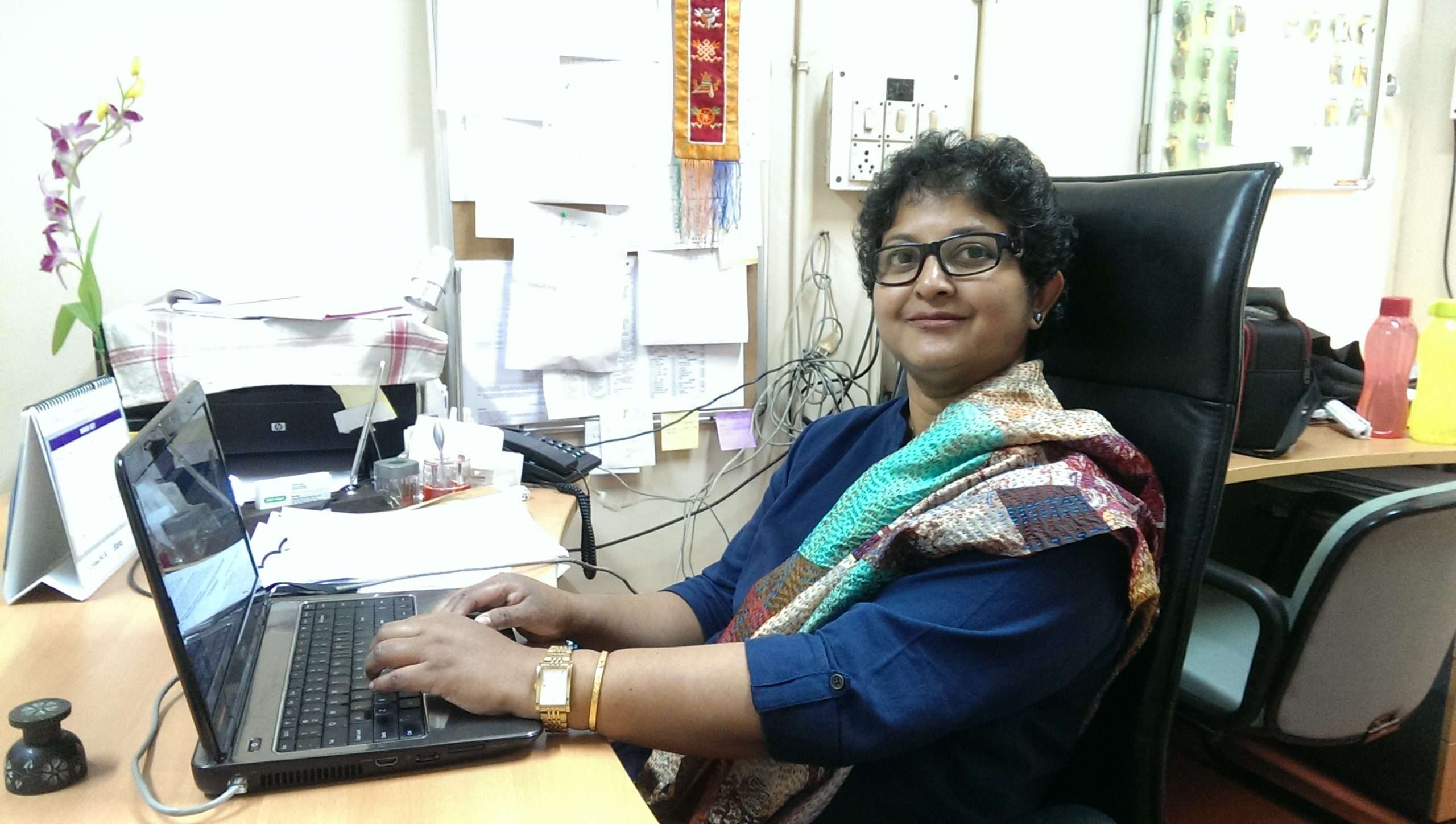 It’s amazing how life has been designed. You look at the molecular details and whether you believe in god or not, you wonder – who came up with this?

Animals such as mice, monkeys and humans are commonly termed by scientists as ‘higher’ organisms, owing to their apparent complexity when compared to the ‘lower’ micro-organisms like bacteria, viruses and protozoa. This is one of Srimonti Sarkar’s biggest pet peeves. “I don’t like the term “higher”; we use it only because those are the systems we are more familiar with,” said the evolutionary cell biologist at Bose Institute in Kolkata. Her annoyance is unsurprising.

The small size of microbes makes them anything but inferior. The fact that they are are able to do so many life processes with so little frames the questions behind most of the world’s cell biology research. For example, why does Giardia lamblia, Srimonti’s organisms of choice have two nuclei?

“Giardia infection is one of the leading causes of protozoa-caused diarrhoea in the world, even more than amoeba. At any given time, 200 million individuals on Earth are infected,” said Srimonti. But cell biologists like Srimonti are fascinated by Giardia, not only because it is pathogenic but also because of “the toolkit it uses to go through life”. This protozoan is made of just one cell (humans have trillions) and it lacks cell components like a Golgi body, lysosome, and mitochondria (though it was later found to possess mitochondrion-related organelles called mitosomes).  “It has taken a very minimalistic approach. If a protein complex is made of sixteen subunits in so-called ‘higher’ species, Giardia will do it with 10,” she said. But Giardia has an important peculiarity. It has two fully functional nuclei.

The nucleus is a key organelle of any cell because it contains DNA, the genetic material that directs the cell’s working. So what use does Giardia have for two? “Giardia goes through life without many cell organelles and it’s unicellular so it doesn’t even need to do lots of cell-cell communication. So why would it need this complexity in life – beats me,” she admitted. “That is the million dollar question.”

Moving on from yeast

This enigma around Giardia is what initially drew Srimonti towards them. “In my PhD and postdoctoral studies in the US I used to work on yeast but my husband was working with Giardia during his PhD. I had not come across any other organism like this.” So when it was time to come back to India and set up a new lab, Giardia ticked all her boxes.

Not a lot of labs in the world were doing the kind of basic research Srimonti was interested in, and Giardia was of special interest since it caused a tropical disease that affects a lot of Indian people, especially the economically poor. Moreover, her yeast studies had advanced to a level where her lab would need a lot of high-tech equipment which was unaffordable. She set up her new lab for Giardia, and there has been no looking back since.

For Giardia to successfully attach to the gut of humans, it needs to transition from its ‘trophozoid’ avatar (which is mobile thanks to eight tentacle-like flagella) to its ‘cyst’ avatar (non-mobile since the flagella are retracted). The transition involves the deactivation of some existing proteins and the synthesis of new proteins. A complex of proteins called the proteasome is crucial to enable this switch. 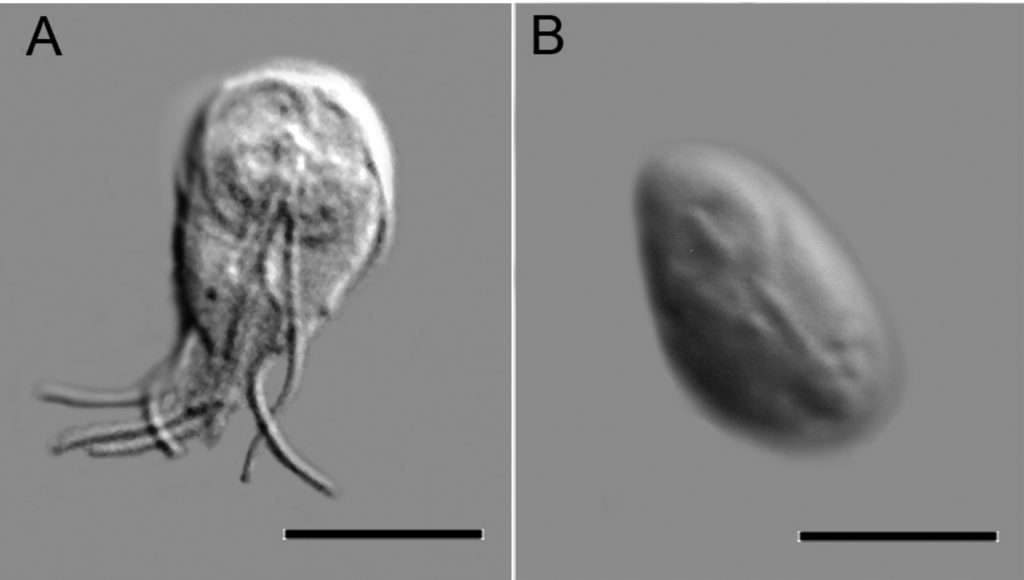 “The proteasome is the main ‘trash can’ of a cell. Damaged and useless proteins are targeted here,” explained Srimonti. Proteins fated for destruction are chemically tagged with a molecule called ubiquitin. “The proteasome can recognise the tag. If it sees a protein with ubiquitin, it says ‘Aha you are going to get degraded’.”

Usually, the proteins that make up the proteosome occur in the nucleus or floating in the cytoplasm of a cell. But while examining the distribution of one of these proteins under a confocal microscope, Srimonti and her students discovered them clustered around all eight of Giardia’s flagellar pores (the point of emergence of flagella). “This was not known before. When we sent the paper out, it came back with rave reviews – the reviewers said this is going to be very important in the long run. The paper was published last year.” 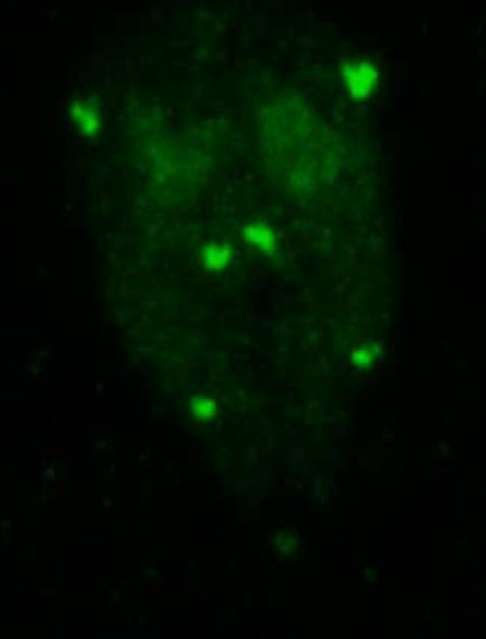 The proteasome protein finds an additional home at the flagellar pores of Giardia. The confocal microscope image that led Srimonti to this discovery.

The distribution of a protein is often an indication of its function. Srimonti suspects that these proteins might have duties that are separate from their proteasomal duties. “Though Giardia has a very small genome, its life cycle is very complex. This is made possible probably because many of its proteins do moonlighting duties. We need to understand what these are.”

Though her research is fundamental and many miles from clinical applications, it does throw open windows of opportunity. Since proteosomes play an important role in the transition of Giardia between its two avatars, such discoveries may have important implications for the way Giardia infections are typically handled. “We still don’t know how Giardia causes diarrhoea. We haven’t been able to identify any toxins it produces. There are drugs but these are all based its low oxygen tolerance and target only trophozoid avatar.”

This huge reliance on a single pathway is not a sustainable solution, according to Srimonti. Why is that, I asked her. She responded with the term that has become a nightmare for public health: drug resistance. “There is emerging drug resistance in Giardia. We need to find other targets so we can have multiple ways of targeting the organism.” The ideal strategy, she said, will be one that targets the transition from trophozoid to cyst. A Giardia that cannot form a cyst cannot infect.

Srimonti worries when people take a complacent attitude towards the Giardia problem. “People ask it doesn’t kill anybody, so why focus on it? They do not realise that Giardia is most prevalent in post-weaned children, preventing their intestines from absorbing nutrients and causing not just diarrhoea but malnutrition too. It’s shown that these kids also suffer cognitive difficulties. We still don’t know why, but these long-term side effects… you almost think death is a better option,” she lamented. “We need other drug targets!”

The path to academia

Srimonti was born in the town of Bardhaman in West Bengal. She moved to Kolkata when she was six. Both her parents were gynaecologists so for much of her childhood she looked forward to following in their footsteps. But in her final years of school, her interest shifted to chemistry. She decided to pursue biochemistry which was a popular subject at the time. She completed her Masters at the top of her class before deciding to go abroad for a PhD.

Though she started at University of California, Los Angeles (UCLA), she moved to Pennsylvania State University since her long-term boyfriend (and soon-to-be husband) had been offered a postdoctoral position there. “It was still early into my PhD and I decided I did not want to be travelling to-and-fro for six years,” she said. She didn’t regret it. “I absolutely loved Penn State. It was a lot more laidback and I had great mentors.” 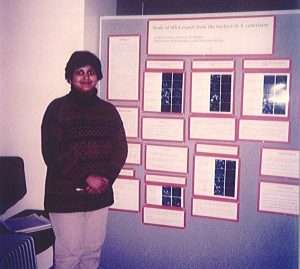 At Penn State, I loved my lab rotations, where we spent a year trying out different labs and doing coursework before choosing our lab. I’ve never understood why lab rotations don’t work in India. I’ve tried to be a very vocal proponent of this. But the way the system is set up, the countdown for five years of fellowship starts the moment the student joins. In the US it’s easier to finish your work within the five years – if you order something, it arrives the next day. In India, it’s not like that. But lab rotations set an important foundation. You learn about the department, develop bonds with students and can easily approach faculty members.

Making the most of India

For her postdoctoral studies she moved to Santiago – by now she was married. After three years, when her husband got a job in India, she had to make the choice of staying on with their two-year-old son in the US to do a second postdoc or accompanying him back to the homeland. “Again, the family angle came. I did not want to deprive my husband of my son’s company.”

Srimonti returned to India without a job at hand, but worked as a research assistant until she landed a position as a lecturer in the relatively new West Bengal University of Technology. “It was an all-female faculty and I had a wonderful time. The resources were limited but I learnt how to get things going,” she reminisced.

More importantly, Srimonti was bitten by the teaching bug. When she was invited as a guest lecturer to teach undergraduate students in IISER Kolkata, Srimonti accepted. “That was tough because these were kids – only two girls out of 38 students – who wanted to be engineers at IITs and instead were told you didn’t make it, but you can come here. They hated biology and saw themselves as failures. And I was this woman here who had the gall to teach them biology,” she laughed. “It was baptism by fire, but I loved it!”

The antipathy for biology may be a reflection of boring high school textbooks, Srimonti feels. “High school biology textbooks don’t have good pictures; they don’t talk a lot about the amazing things inside a cell. It’s amazing – how life has been designed. You look at the molecular details and whether you believe in god or not, you wonder – who came up with this! I truly wish high school biology textbooks did a better job.”

They hated biology and saw themselves as failures. And I was this woman here who had the gall to teach them biology. It was baptism by fire, but I loved it!

Later, she accepted a full-time role at IISER, but the distance from their campus to her home complicated things. Her husband worked in Calcutta University and was not keen on a job switch, so that meant she either had to live on campus away from her family or make the commute. She chose the latter. “I spent four hours a day commuting, and it was okay for two years but I had very little energy and got very little time with my children. I started having other issues like blood pressure also.”

In spite of loving her job at IISER, she decided it would be wise to look for something closer to home. Luckily, Bose Institute was happy to have her and she joined them in 2011. “Since the institute and lab were well established, I could be more focused on science here.” Today, Srimonti’s first three PhD students have completed their work. 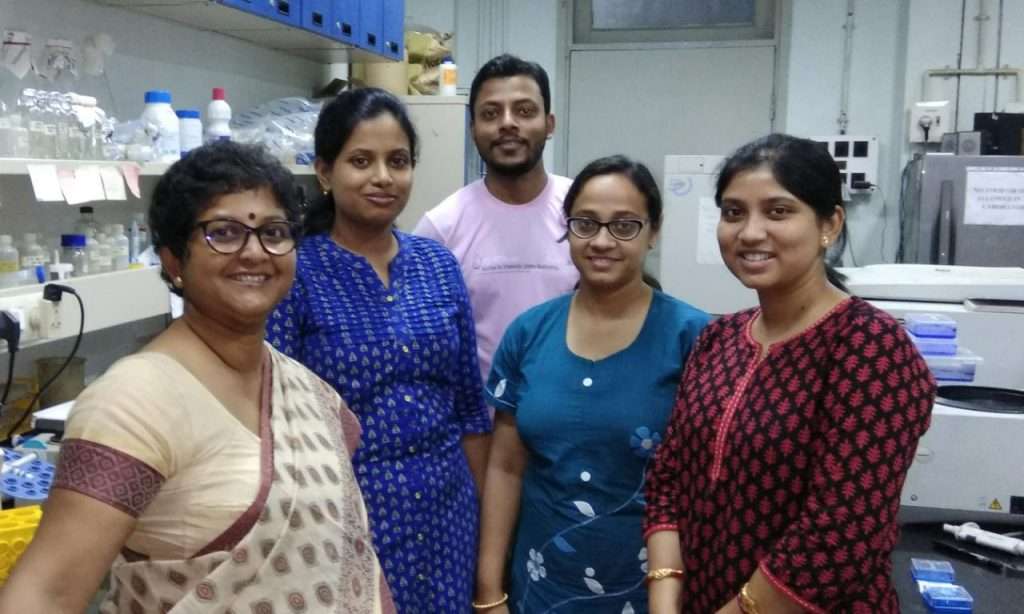 Srimonti (left) with her team at Bose Institute

While she admits that women are not very visible in research, Srimonti is heartened that all the women scientists she knows are very powerful and unafraid to speak their minds. “I guess I’ve been very fortunate. My mother was a doctor, her elder sister had a BA degree before Independence of the country… so there was a very strong women empowerment factor in my mother’s side of the family.” She also feels grateful for her husband’s support. “If I tell my husband I don’t want to work anymore and ask him to take care of all the finances, he would joke about getting a divorce,” she said, breaking into laughter. “He really has been a solid support.”