A geophysicist from IIT Kharagpur tells us about the tricks of her trade. 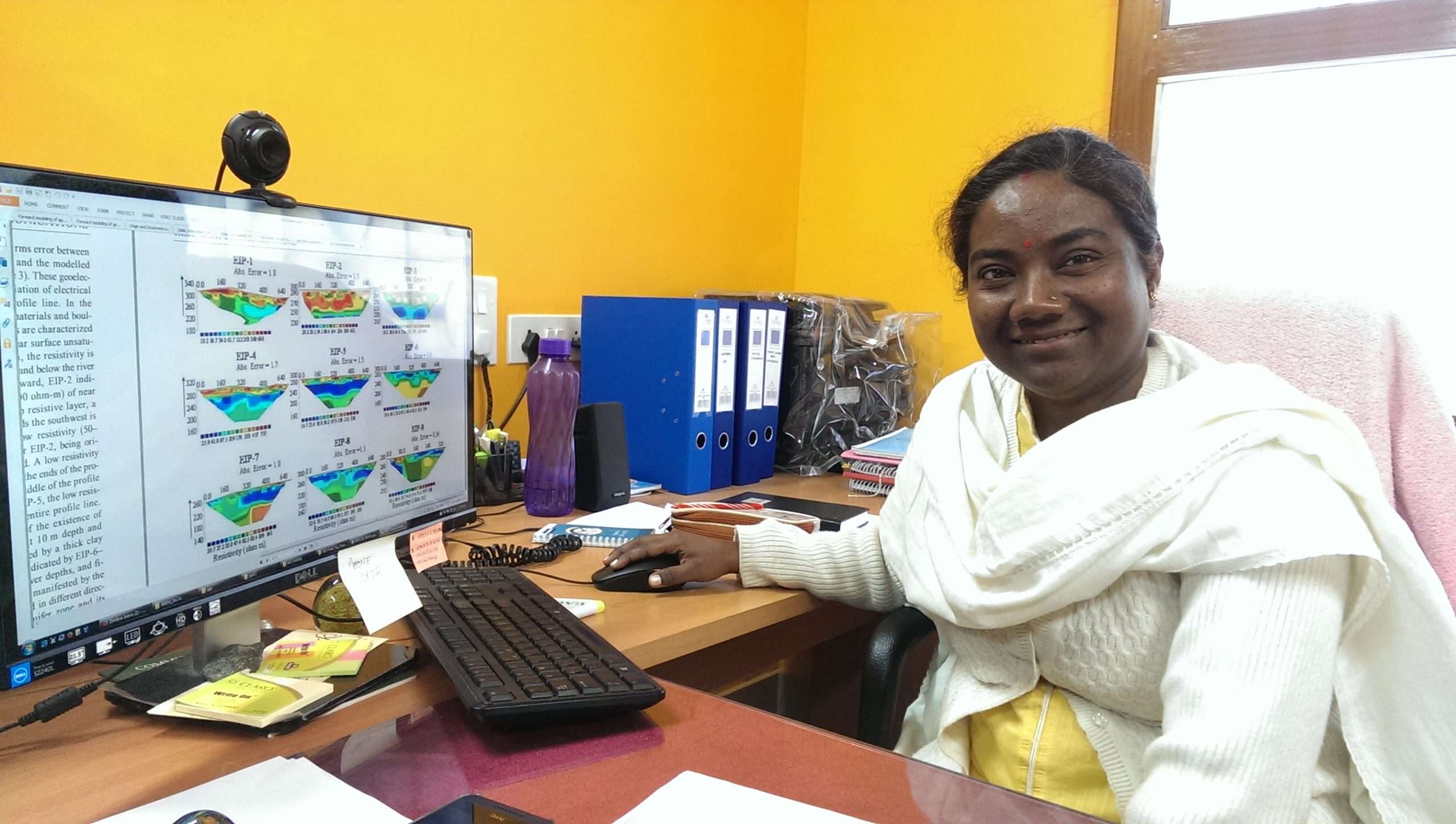 Kolkata was chillier than I expected in January and it took quite some effort to drag myself out of bed to catch an early morning train to Kharagpur. Kharagpur, where the first of the IITs was established in 1951, is just about two hours away from Kolkata. When I reached, it was still early hours. On my way to the Department of Geology and Geophysics, giant banners informed me that the annual Alumni Meet was underway. That explained the clusters of middle-aged men – looking casually spiffy and successful – wandering around reminiscing with cameras in hand and nostalgic smiles on their faces. I wasn’t too surprised to spot no women among them.

The IITs are notorious for their poor gender ratios – currently standing at about 8% of female students, compared to > 40% in other engineering colleges in India. This disparity has been recognised and there now seems to be some intentions to correct it, but in the meanwhile, women scientists among the faculty will no doubt serve as a reminder to the students that science can indeed be a space that women belong in. I was looking forward to chatting with one among this small community – Sudha Agrahari, who joined IIT Kharagpur in 2013.

Sudha is a geophysicist, but unlike IISc’s Kusala Rajendran who we interviewed last year, Sudha doesn’t investigate tectonic plate movement; she is more concerned about geophysics that directly impacts environmental issues such as groundwater contamination and aquifer detection.

‘Groundwater’ refers to the deposits of water that collects in pores of soil and rocks. The layers of rock where these water deposits are found underground are called aquifers. In order to use groundwater for our daily use and consumption, we dig borewells that connect aquifers to the surface. Sudha specialises in using principles of physics to predict and detect the precise location of aquifers. “Our earth works as a natural filter (that’s why groundwater is fit to drink). It is easier to dig only a few meters to collect water but we may have to go deeper if the shallow aquifers are contaminated,” she said. In coastal areas, this contamination is often by seawater.

It’s natural for salty seawater to ‘intrude’ through the sand into pure groundwater – making it unfit for consumption. Coastal areas have to be careful about not digging wells too close to the sea. This is another area where Sudha’s geophysics helps. “We do measurements to say for example: because of sea intrusion, the groundwater up to this point is contaminated. Beyond this, it is safe to use’,” she explained. With this information, inhabitants of the area can decide to stay safe and fulfill their groundwater requirement from deeper, uncontaminated aquifers, or if they have no choice but to use groundwater close to the contaminated area, they can purify the water.

Seawater intrusion is more hazardous if industrial waste is routinely disposed into the sea. According to Sudha, when such a  disposal is done by the government, they ensure the wastes pass through a lining of cement so there is less seepage. In due course of time even this cement degrades. Geophysicists can provide advice in these situations too. And they can do this non-invasively, i.e. with no digging.

Sudha recounted her experience researching mountainous areas. “The problem here (in the mountains) is that if a borehole is made, they may get water today, but after a few months or a year, there is no more water. This happens when the water resides [only] in a small pocket.” Thankfully, physics can come to the rescue.

The Art of ERT

The electric and electromagnetic properties of materials allow scientists like Sudha to know what is underground without any digging. “I use a method called electrical resistivity tomography (ERT) to tell how big the aquifer at this location is, whether it is laterally extended, connected to any other aquifer, if there are nearby aquifers… and so on,” said Sudha. These kinds of studies are tremendously useful when borewells or handpumps are being set up in cities and villages.

So how exactly does ERT work? I asked Sudha to take me through the practical steps in setting up an experiment on site. She took a deep breath before launching into a vivid explanation (see circuit diagram). “It’s a huge setup – we use two electrode rods connected to a battery through a cable. We insert the rods into the ground so that it is stable and can stand up. Now we connect another two electrodes to the ground and measure the potential difference in between these two rods. When we start the power supply, current will start flowing in the earth’s subsurface. We also connect here an ammeter to see how much current is flowing.”

Sudha on site with an ERT setup

This is where the fun starts. We know that current flows from the (+) electrode to the (-) electrode and that is what one would expect to see here as well. But it is not the case, Sudha pointed out. “Earth’s subsurface is not uniform. Resistivity changes everywhere…”

According, to Sudha, most contamination is conductive in nature, meaning it has low resistivity. Some, like hydrocarbons or biological contaminations, are not – so they show high resistivity. The experiment can detect these irregularities (a potential drop indicates resistivity), which Sudha interprets to further characterise the nature of the contaminations. 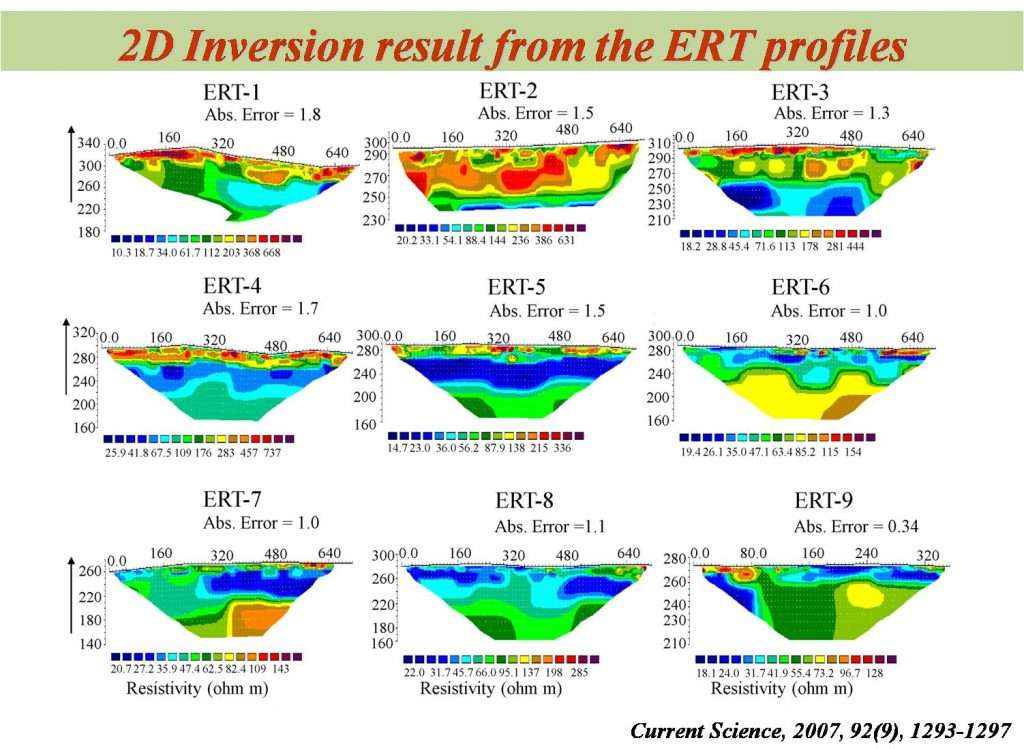 Sudha’s PhD fieldwork took place around the Sivalik hills in the Himalayan region where a moody river troubled the locals. “In the rainy season, it filled up but at most other times it remained dry. There were people dependent on it for irrigation and on the groundwater for drinking water supply. We did several surveys to understand why groundwater is present for the whole year in some aquifers but not in others.” Using ERT, she created a map of the area that colour coded the resistivity of the subsurface and show the network of aquifers that lay underneath. This explained why some areas were better water-stocked than others.

Sudha added that the set-up she had described earlier is the simplest possible one; most of their experiments involve not four but up to 42 electrodes! Add to this the Himalayan terrain and Sudha had a bumpy task ahead of her. “The Himalayas are one of the toughest terrains to do fieldwork. You have to go everywhere by foot, carry huge equipment all the time. Several times we had to return because the land was not suitable.” 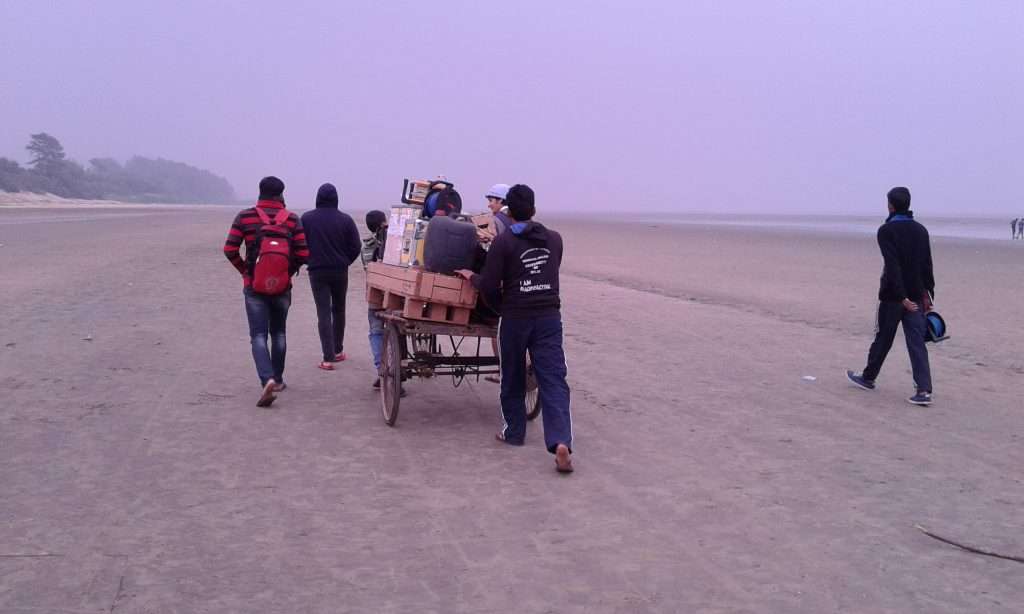 Choosing a science for humankind

As the daughter of a railway serviceman growing up in Gorakhpur, Uttar Pradesh, Sudha’s aptitude for academics was evident even in school. She recalled her crushing disappointment every time she ranked second in exams. “It felt as if I had failed, you know?” she smiled. “I didn’t study in big schools – but my teachers always forced me to go to better schools. And somehow I got scholarships and fellowships to support my studies. This much was very clear to me – that I will go for science.” And physics was her favourite. She did her BSc. from Gorakhpur University and MSc. at IIT Roorkee. She cleared the exams necessary for proceeding with a PhD and then it was finally time to decide what area of physics she would do research in.

Her primary insistence was to pursue something not just experimental, but also something that is impact driven. “I wanted to do something directly related to mankind. I didn’t want to develop something that goes to some industry before it comes to people; I wanted to be in direct contact with people.”

She decided to accompany a geophysics professor to the field and was elated to find that this was where she was meant to be. “In the field, you talk to people, and you hear about the problems people are facing. And it’s very interesting to see that a farmer – who has had no education in his life – has made a groundwater recharge system, just out of his experience and his need. I get educated so much on the field. Here you are no longer in the science community, and you get to know what the real requirements of common people are.”

It took some getting used to for Sudha, who at the time was used to the confines of a lab. For instance, she had to learn to yell out to her teammates. “You can’t communicate quietly up there in the field. I was not used to shouting, but there’s no choice – the setup itself is 700 metres long… I liked all of this, and decided to jump from physics to geophysics.”

During her PhD, Sudha applied for and won a German Academic Exchange Service (DAAD) scholarship which enabled her to spend three years in Germany getting trained in electromagnetic and modelling techniques. In between, she returned to India to submit her PhD thesis. She got married around this time; her husband is a chemical engineer trained in IIT Kanpur and currently working in Rajiv Gandhi Institute of Petroleum Technology in Rae Bareli, nearly 900 kilometres away.

Sudha admits that when she got the offer from IIT Kharagpur, it was not an easy decision for her as her husband was in Belgium at the time. “He was the one who forced me to join – he reminded me that this is a big achievement. But it was very difficult for us – we met only once a year.” They have been married for five years but Sudha is grateful that her husband has never suggested that she leave her job to join him. “Sometimes I get weak, but he supports me.”

Though the couple does not have children yet, Sudha is clear that in any event, children or no children her future in science is certain. She narrated an incident when a man on her DAAD interview panel questioned her motivations. “He asked me this: Let’s say we give you the fellowship. You will go abroad, do the work, then you will come back get married have children and leave science… I replied ‘yes, you are right. I will go abroad, come back, get married, have children. But I will not leave science.” From then on, Sudha always goes back to these words when faced with tough decisions. ‘‘It has always been very clear to me that I will remain in science whatever happens.”

I replied ‘yes, you are right. I will go abroad, come back, get married, have children. But I will not leave science.”

Encountering Feminism on the Field

Sudha’s team on a field site

“Geology has a lot of women these days. It’s not like the past. Now there is no reason at all for girls to be afraid. In fact, sometimes I benefit from being a woman! While working in a rural place Garhwal (in Uttarakhand), suddenly a group of women came holding sickles. You know how they normally say that the male is the earning member? But in those places we saw that it was the women did the the household stuff and the farming work also. These women told us we cannot do our experiments – they were scared we would disturb their land. Somehow, when I told one of the ladies that this was for my PhD work, they gave full permission. She was able to convince all the women – it was important to all of them that women should be educated. Once they got to know that this was for the academics of a girl, they supported us even without knowing us…”