Why did police lathi charge the women students of BHU on Saturday night and was it really a lone incident of sexual assault on campus that has triggered this rage? A PhD student at the university campus reports on the prevalent state-of-mind among her community in Banaras Hindu University. 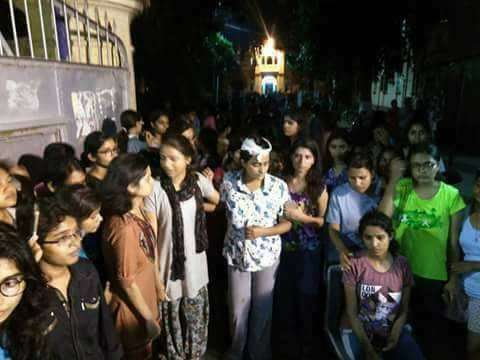 Ever since the appointment of their new VC, students at BHU has been protesting misogynistic policies as well as saffronisation of the institute. Movements like #SaveBHUfromRSS and #StopCampusSexism have been ongoing for many months now. However, a public sexual assault case and the shocking acts of violence against female students of her university in the past few days have rattled focused researchers and students there.

They are now raising their voices. One of them, a budding woman scientist found some time on Saturday to tell us what transpired and what thoughts are haunting dedicated female students in the BHU community following the shameful events. Her words are merely an echo of what many many students in BHU are currently demanding.

It was 6 pm in the evening when a girl student was passing by on campus. A bike stopped by near her and [the riders] physically molested her on a rather busy faculty road. They even pulled off the girl’s pants and did much more.

The security guards of BHU were just a few meters away and they didn’t come to help as they were afraid of being beaten by the group of boys. When the girl asked them for help they rudely asked her why was she there at that time – as she a girl, she is not supposed to be outside. They refused to help her.

Feeling helpless, she rushed to her hostel and complained to her warden. After hearing the whole case, her warden fired back at her and said “Tum ladkiyan itni der tak bahar ghumogi aur kuch hota hai to aa jati ho complain leke” [“you girls roam around outside so late, something happens and then you come here with complaints”]. As if this was not enough ridicule, she further added that the curfew time for hostel entry will henceforth be 6 pm, instead of 7 pm.Girl students of BHU were not allowed to leave their hostels after 7 pm. They are often asked to wear decent clothes and be sanskaari [a Hindi word used to refer to one who follows values considered good in Indian culture]. The [attacked] girl was brave enough and driven by the humiliation she thought to fight back. She got the support of girl students all over BHU – this was not a new [unheard of] case in BHU, but this was the end of bearing [tolerance].

They started a protest at Singh Dwar at BHU (the main gate) and got the support of male students as well. They demanded additional security for girl students and leniency in hostel timings according to UGC norms and asked BHU VC himself to come and hear their demands.The BHU VC didn’t come. [While] students were peacefully protesting, suddenly today night [Saturday 23rd Sep 2017] police did lathi-charge on them [see below video posted on Facebook] and in air firing. Some students are hospitalised and the situation is really tense. This was all happening amidst PM Narendra Modi’s visit to his very own constituency Varanasi.

Some peace-breakers have coined this protest as ‘communist-supported’, ‘against RSS mentality’ and are trying hard to mould the real issue. BHU VC is an RSS member and got this position after BJP came to rule. Since the day he joined BHU, the atmosphere has been violent and student-unfriendly. We demand suspension of the VC and security in BHU for girl students.

1 response to "BHU woman scientist on the protests and demands"

Pingback: Kavita, Doing Science Like a Boss - The Life of Science