A condensed matter physicist shows us around her high-tech lab

WHERE? UGC-DAE Consortium for Scientific Research

Indore-based UGC-DAE Consortium for Scientific Research is an institute like no other in the country. The government-financed facility houses a selection of instruments, some of them costing over two crores, that can peer into the deepest aspects of the material world.

As a user-based institute, its doors are open to research groups looking to test their samples with sophisticated machines that are hard to find anywhere else. These machines are a treasure chest for physicists. Imagine the possibilities for research when you can directly look inside molecules on a nanoscale microscope. 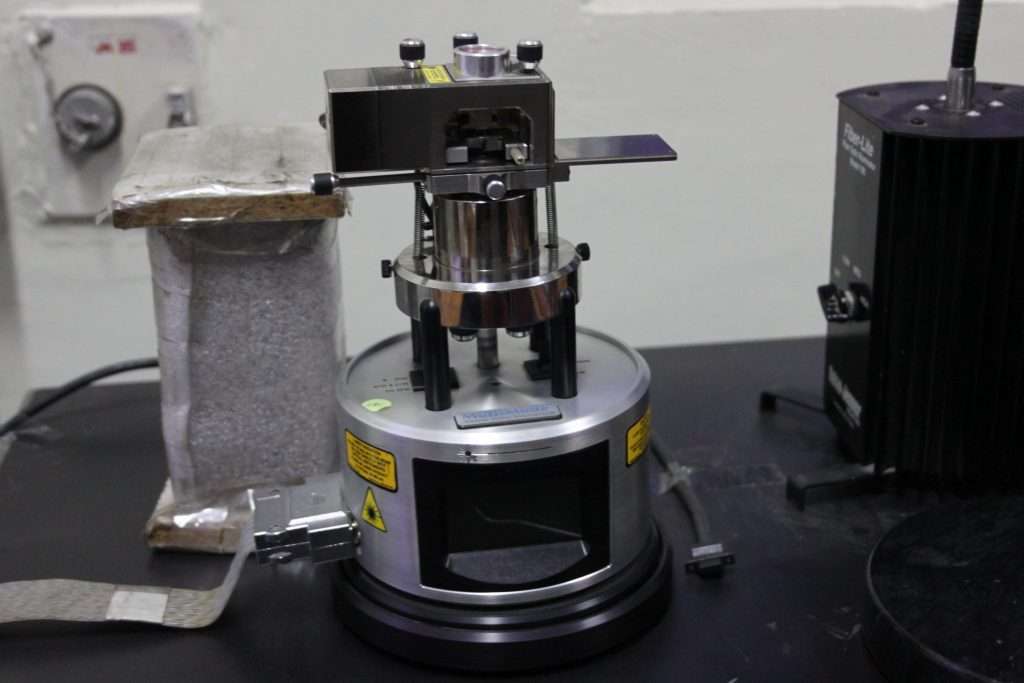 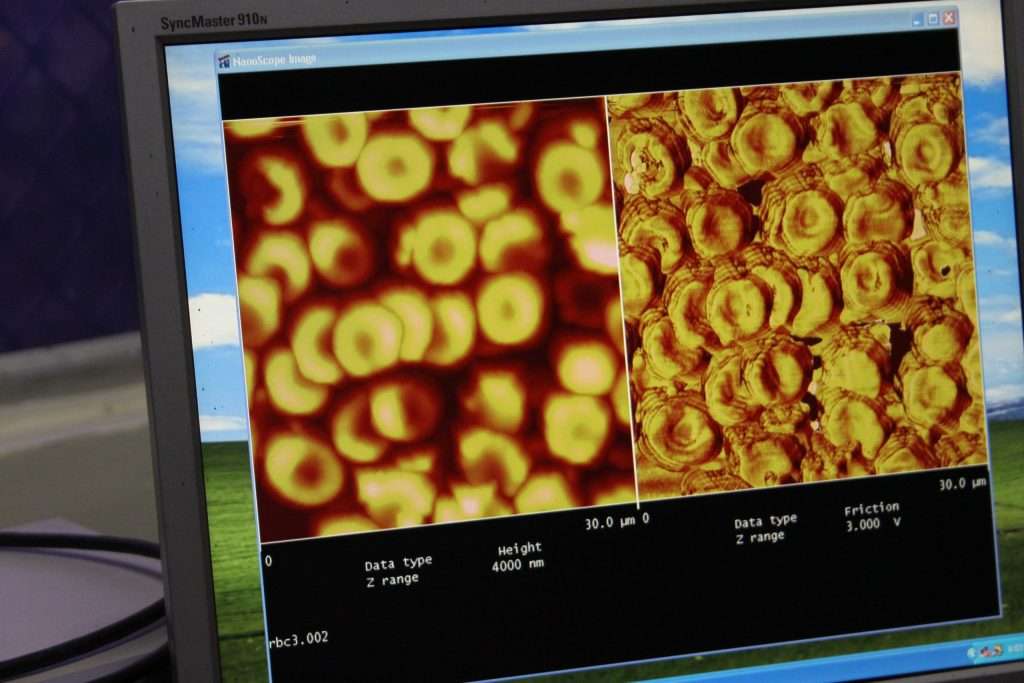 The availability of these high-tech facilities at CSR Indore is collaborative rather than transactional. In-house scientists specialising in condensed matter physics offer their knowledge base to those they team up with. “We get involved in their project, help them make measurements, analyse data and write the papers. We do own research too… we work on problems that could add to fundamental science or find solutions from an application point of view,” said Archana Lakhani, who leads one of the high-tech labs here.

Archana Lakhani is the only woman among the scientists at CSR Indore and this has been the case for the last 10 years. This facility that I visited to interview Archana is pocketed inside the huge Devi Ahilya Vishwavidyalaya campus.

Archana glided through the rooms that she knows well, greeted familiar faces and pointed at large science instruments as she told me her story.

Back to MP via UK

Archana’s journey in physics began twenty years ago in her Madhya Pradesh hometown Ujjain, that she remembers as a pleasant temple city. At Vikram University in Ujjain, she was no ordinary student. She was the university topper in all three of her graduation years.

“I was confused after my B.Sc whether I should go on with mathematics or physics. Physics is more oriented towards thinking than mathematics, which is a logical empirical practice. So I was drawn to physics.” But if all options were open she would have chosen psychology, she laughingly confessed.

I felt that if I continue there then I may get distracted from science and end up with a large gap.

Archana followed her intuition and started an MSc. in Physics at the same university. During her summer project at TIFR Mumbai, she got interested in superconductivity, prompting her to pursue a PhD in the field at CSR Indore where she now works. Her PhD work, partly done in Freie University, Berlin, lasted around seven years and was followed by a postdoctoral fellowship at Institute of Plasma Research, Gandhinagar. Archana then accepted a job developing Dilution Refrigerators with Oxford Instruments, UK. “It is one of the very few companies that make these (amazing) machines in the world,” she told me. These refrigerators can take the temperature down to milliKelvins from room temperature of 300 Kelvin.

Despite earning about eight times more than she would get back home and the fact that “life was interesting there (in the UK)”, Archana felt she was missing something important – her own research. “I felt that if I continue there then I may get distracted from science and end up with a large gap.” So she applied for a faculty position at the same institute she pursued her PhD research and has been hard at work at CSR Indore since 2007.

On the door to her lab is a big sign saying “DANGER, High Magnetic Field”. Inside the airy room, Archana’s scientific posters decorate the walls. Cryostats full of liquid nitrogen stand in the corner next to the window along with a heavy duty instrument housing a big magnet. Two of her students who were jabbing away busily on computers stood up to greet us. 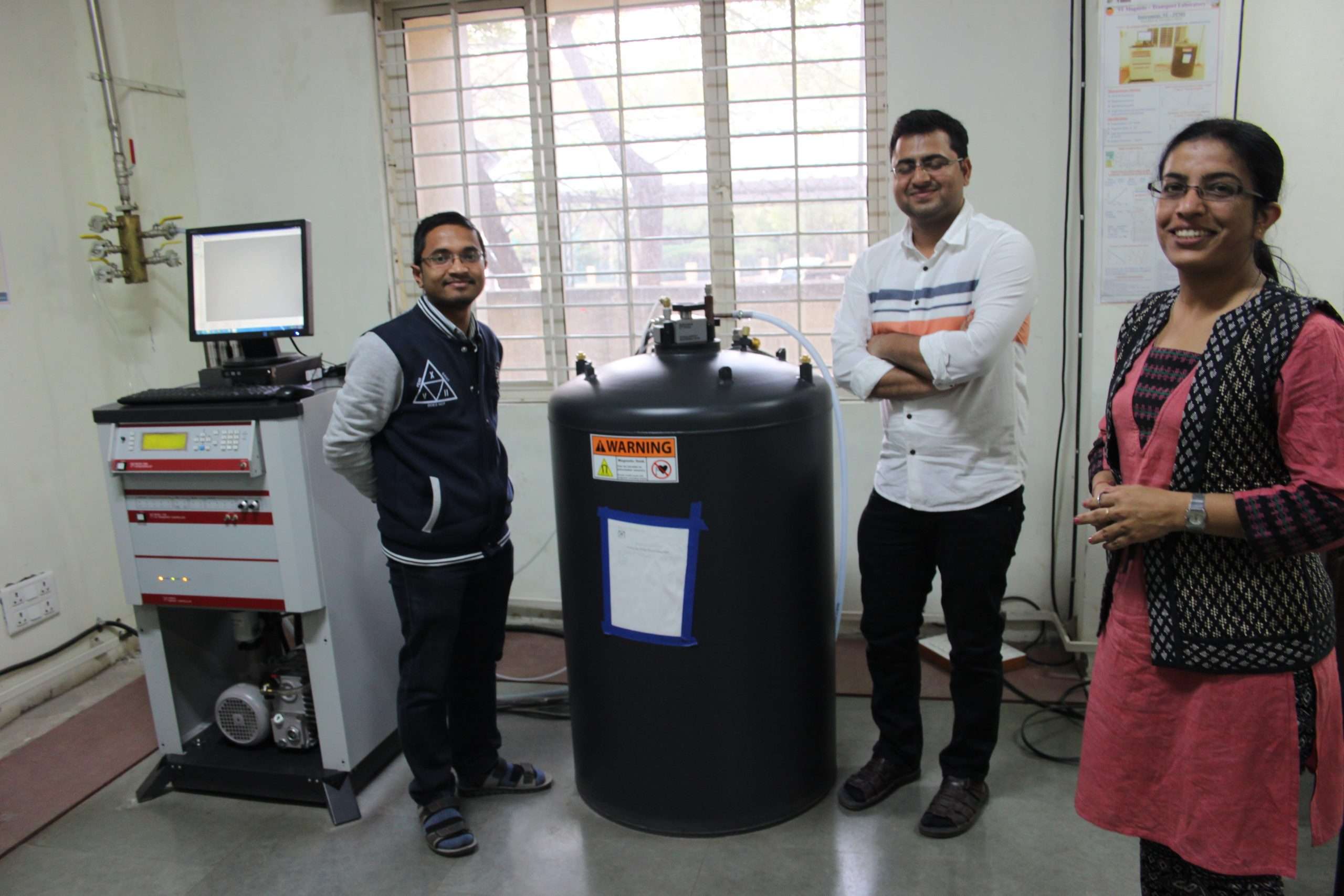 Archana in her lab with her students

Archana discourages her students from staying in the lab through the night and tries to make sure there is always ventilation. “For low temperatures, we use liquid nitrogen that evaporates at 77 Kelvin. Without any ventilation, the room will fill up with nitrogen gas and no air or oxygen will remain,” she warned. “There have been instances abroad where the absence of oxygen caused people to suffocate and die.’’ Suffocation by inert gases like helium and nitrogen slowly and undetectably diluting down the oxygen in the breathable air and the body is, in fact, common and has taken many lives.

In her lab, experiments are carried out on different materials at low temperatures and high magnetic fields. These conditions reveal various interesting properties of the material in question. Currently, Archana is the person in charge of requests for measurements of the ‘Magnetoresistance and Hall effect’ beside her own research pursuits. ‘‘The low temperatures and high magnetic field propel the electrical transport of the conducting materials to oscillate, seen in the form of Shubnikov–de Haas effect and Quantum Hall effect. These oscillations are useful in studying the Fermi surface of the materials,’’ Archana explained.

What information can these measurements give us, I asked her begging for plainspeak. “You can find out many things about the material from its Hall effect measurement,” she answered. “We can find how many charge carriers it contains. For example, we can measure the number of electrons present per cm cube in a piece of iron. We can also determine how fast the electrons are moving in the sample at that temperature. The mobility changes with respect to temperature. We can find out if the sample material will be useful for some kind of application or not.” 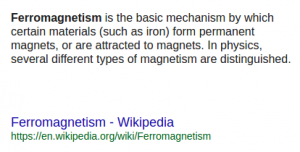 Simplistically speaking, ferromagnetism or spintronics is the basis of all storage devices we use these days – hard disks, computers and mobile phones. It is the ability of certain materials to become magnetic and stay that way. It takes place when spins of all electrons in the material become aligned in one direction. Because of their high applicability, Archana likes to call these materials ‘functional materials’.

Earlier we had floppy disks and CDs that held not more than 700MB of data. But now we have hard drives that hold up to 16 terabytes. “The evolution of storage devices took place thanks to the evolution of materials used to make them,” she said.

Some materials are made up of layering ferromagnetic and non-ferromagnetic alloys of many metals and/or rare earth metals, and the best of them have a property called giant magnetoresistance (GMR) effect. This might ring a bell since the discoverers of GMR were awarded the 2007 Nobel Prize in physics. “These are special because their electric conductivity can change largely depending on the presence of magnetic field. These materials can be used as magnetic field sensors in hard disks. When you pass a magnetic field, bits (units of digital information) can be written and rewritten in the storage drive. Essentially it is the change in a property of the material with a magnetic field that allows storing data.”

Challenges ahead for Spintronics

In spite of all the excitement in the field, Archana observes that spintronics is not progressing as fast as it could before. “Most materials showing high GMR are almost saturated to their capacity. So now people like me are looking for other types of materials such as topological insulators to extend the technology.”

As thrilled as she would be to discover a material suitable for the next generation of storage devices, Archana insists that her research is at a more fundamental level – they may, of course, lead to applications later on.

It is not so easy to aim for applications in this field because of one big hindrance – most of the work happens at very low temperatures. “These materials need to be used in any device that people may use on a day-to-day basis that exists at room temperature,” Archana rued. This is very far from the low temperature needed for properties that scientists like her are interested in. One example is the property of superconductivity that Archana looked at in some materials during her PhD. “People have tried hard and a Nobel Prize is guaranteed for anybody who discovers superconductivity at room temperature,’’ she laughed.

Most materials showing high GMR are almost saturated to their capacity. So now people like me are looking for other types of materials such as topological insulators to extend the technology.

“Some alloys with the likes of bismuth, strontium and copper oxide superconduct at around 100 to 120 Kelvin. But even this is still far from room temperature of 300 Kelvin. So that’s a challenge. We are also trying to bring properties and materials up to room temperature. Our aim is both to form a device which can be useful, that would be ân ultimate thing but it doesn’t matter, we do the research and look for various interesting properties. Fundamental research is the basis of all possible applications.’’

To expand horizons, Archana often takes to creating compounds right from scratch.  “There are various techniques by which we build on pure elements into materials. A compound is not formed by just fusing elements, we need the right preparation conditions – only then the fusing takes place in a furnace or a heated tube. We need to anneal them, sinter them and so on to form new materials. The finished compound needs to have the right stoichiometry, orientation and lattice arrangement. We prepare single crystals by fixing the orientation and growth of crystallite or, we fuse two or three elements to form a polycrystal with crystallites growing in different directions. If you can grow all the crystallites in one direction, then it forms a big crystal. A big crystal will give you better properties – truer properties of the homogenous material without much disorder.”

Reservation for women is distasteful but important

The main reason for lack of women in Indian physics according to Archana is domestic responsibilities. She is unmarried and suspects that in the current societal scenario if you are involved with family responsibilities, science might be hard to do.  “Both these things cannot be done in synchrony – especially in experimental physics, where a lot of mental and physical work is involved. You are preoccupied with your scientific problems so a lot of management is required to do both,” she opined.

At the point where students start choosing their careers, they often don’t have a direction. We need to have forums that provide encouragement and direction at that moment.

Archana values how far she has come in the scientific world on the backs of her own mental prowess and the idea of reserving faculty positions for women is not something she is fond of. “This is my personal opinion,” she stressed, adding however that she recognised the gender gap in the Indian scientific community, even more prominent in her field. Therefore she agrees that reservation might be necessary for addition to special workshops for women at the BSc and MSc level to raise awareness about options available to them. “At the point where students start choosing their careers, they often don’t have a direction. We need to have forums that provide encouragement and direction at that moment. The whole system needs to get involved for this,” she recommended.