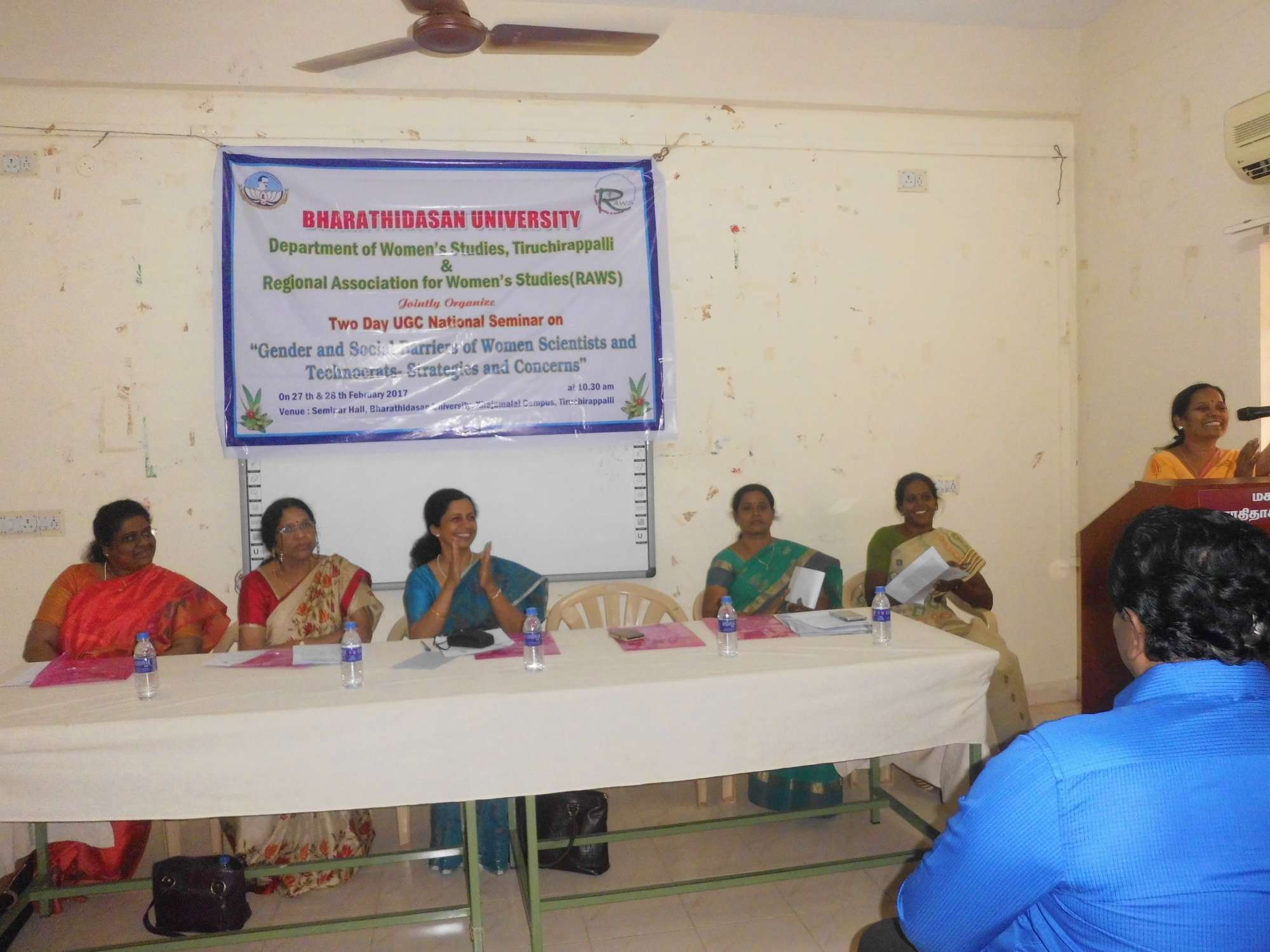 “You cannot be more educated than the groom,” Dr. S. Jayalekshmi, was often told by distant family and relatives. A professor of Civil Engineering at NIT-Trichy, Jayalekshmi was speaking at a conference on Gender and Social Barriers for Women Scientists and Technocrats: Strategies and Concerns at Bharathidasan University, Trichy. She credited her father who was able to buy some time for her marriage. “I was engaged to a man for 9 years! For all that time, we hadn’t even spoken. But when my father found out that their family was ill-treating another woman in their house, he called off the marriage. Such support I got from my family”.

‘Support’ was a topic that came up again and again throughout the two-day conference. I was at the venue, representing The Life of Science to present our key observations so far from over 50 interviews with women scientists around the country.

Dr. Rita John, a physicist from the University of Madras, talked about an incident in her lab that says a lot about the work-home conflict. One of her students was required to submit some details of her project that was crucial for its publication in a journal. However, Rita was irritated to see that the student hesitated. Why couldn’t she spend more time at the lab that day? “I have soaked rice for making idli batter at home”. Rita did not tolerate this excuse and gave the young researcher an ultimatum – “Make batter for the rest of your life, but don’t think of coming back to the lab!” she told her. Eventually, the student arrived within an hour and they published the research in the journal they were aiming for. Though Rita narrated this anecdote to emphasize the need for women to prioritize their work (“Attitude builds altitude,” she said), it must be acknowledged that it is unlikely that male researchers will be facing as many pressures that force them to choose between home and office.

Coming back after a break – a success story

Another key point reiterated in the conference was the need to cleverly and boldly take risks. Dr. Geraldine (a currently retired professor from the Department of Animal Science of Bharathidasan University) came back to her first love, academia, after an eight and a half year gap during which she worked as a government-employee. “People always used to ask me why I have to put up with research when I already have a settled job and a family to take care of. But only I knew what I wanted and resumed research.”

“I started my first funded project after seeing an advertisement in the newspaper. It was from the DST (Department of Science and Technology- India) and called for proposals to study pollution’s effects on prawns in the river Cauvery,” she said. She completed her PhD and went on to an in-depth study of the prawns’ survival strategies to the same pollution. By developing a niche, Dr. Geraldine managed to keep the funds flowing. She eventually went on to commercialize her research on ‘stress proteins’ that helped the prawns counter environmental pressure. Her research devised a way to activate stress proteins in prawns to ensure that fisheries department could transport these prawns better and with less wastage. “Be very clever and careful in choosing your funding agency” she advised. “It is best to start with government-funded projects that offer commercial value to the govt.”

Another person who valued the quality of taking risks was Dr. Mini Shaji Thomas, the first ever woman director of the National Institute of Technology, Trichy. When she was offered the opportunity to be the head of the Department of Electrical Engineering in Jamia Millia Islamia, she latched onto, though she was already employed at the more reputed Delhi College of Engineering (now DTU). She said “I had the option to either be a small fish in a big pond or become a big fish in a small pond. I chose to be the latter.” She went onto become the Director of the Centre for Innovation and Entrepreneurship at Jamia before joining NIT-T as the new director.

A community of supporting characters

It was unanimous opinion among the speakers that women had to work harder than men in the administration to climb the academic ladder. To address this problem all speakers agreed on the need for women to build support systems. “But what about people that do not have a support at home?” asked Delfina Sundar, an activist and participant who advocates for identifications beyond the binary of male and female. “Such people have no other way but to establish a supporting community at workplace” replied Dr. Jayalekshmi. Everyone concurred. “Make sure that you have a community of supporting characters once you start your career in research. Pour out any sufferings you go through to the people in your support system. But never give up” stated Dr. Geraldine strongly.

But it’s difficult to build sufficient support for women employees at workplaces when the functioning of sexual harassment cells in many institutes are ineffective. Dr. Jayalekshmi faced one such demoralizing experience “A student once sent me obscene emails because he failed in the subject I lectured. I learned that the same student had also emailed another faculty. But when the complaint was lodged against him through the administration, no action was initiated.” Dr. P. Ramajayam of Bharathidasan University reflected on the situation and said “Often actions are not taken on complaints citing that the institution’s reputation would be spoiled. The hush-hush policy continues. Such cells requiring social responsibility must be chaired by appropriate personnel motivated by the cause and not [chaired] based on seniority or administrative capabilities.”

The discussion converged at a point where everyone agreed upon the need for implementation of existing policies. For instance, in many institutions, day care centers are established on the institution’s requirement basis for which surveys are taken by the institution. There seems to be an unwritten rule that a daycare facility will be established if at least 15 women in the university opt for one. However, in many cases, the women staff themselves opt not to send their children to crèches due to difficulties in carrying babies and young kids all the way from home. Instead, they find it more comfortable to leave their kids under the care of their in-laws or nannies.

Overall, everyone saw the necessity for one thing – more dialogue. More institutions need to be sensitized about gender equality through similar programs and conferences. “The change we expect, may not happen as long as a kid is primed to give mom the pack of milk and dad the newspaper. Thoughts of gender equality must evolve from a tender age” concluded Dr. N. Manimekalai, the convenor of the conference.