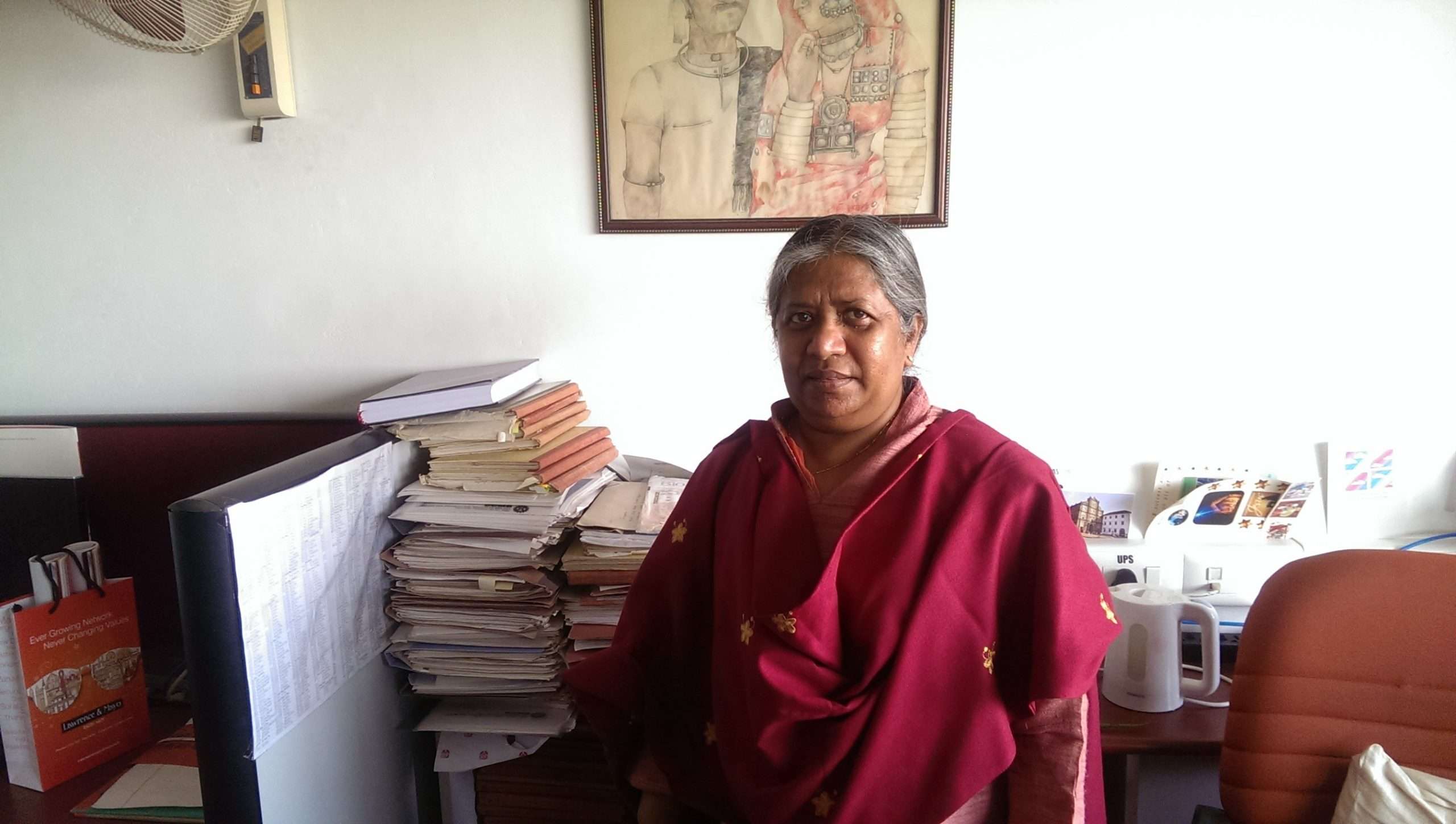 WHERE? Centre for Cellular and Molecular Biology, Hyderabad

Though human DNA, or the genome as it is called, is a chain of around 3 billion molecules called base pairs, only small segments of them called genes are involved in making/coding proteins. There are 20,000 such genes, and together they constitute less than 2% of the whole genome. In the early days of genomics, only genes were considered useful. The rest of the genome was termed junk DNA. This irked scientists for years. How could 98% of the genome be just sitting there doing nothing?

Our genome is organised in each cell of our body as 23 pairs of chromosomes. One pair of these 23 are the ‘sex chromosomes’ and these typically are either XX (in the biologically female) or XY (in the biologically males). As chromosome-Y is the one granting a mammalian individual with biological maleness, most of its genes tend to have roles specific to males, such as biological sex determination and sperm development. But here’s where the mystery starts: chromosome-Y has very few genes – just about 50-60 out of total 20,000 human genes existing in all other chromosomes.

In fact, one of the largest chunks of junk DNA in the human genome lies on the Y chromosome (chrY) and is called the Y heterochromatin. This is a block of DNA 40 million base pairs long (out of a total length of 59 million base pairs). For a long time, this region seemed to have no discernable function. It is composed mostly of sequence repeats and has no genes (DNA segments that can code for proteins). Because of this poverty of genes, chrY is known as one of the genome’s largest ‘gene deserts’.

AJ Rachel, a molecular biologist in CCMB, was determined to prove that the Y heterochromatin was not junk. “It’s just basic intuition. Nature is not wasteful. If something is present, it has a function,” she said to me matter-of-factly as we settled down in her office. It is with this unshakeable belief, and years of training as a biologist, that Rachel set her sights on solving this important piece of the junk DNA puzzle when she joined the centre 30 years ago.

For a long time, this large chunk on chrY was thought to be functionally inert. It was thought not to participate in processes like transcription where genes are copied into molecules called messenger RNAs (mRNA) and translation where this mRNA codes for proteins. But Rachel and her colleagues had a breakthrough. They used a DNA probe and identified two transcripts (mRNA) that were produced from this region. For the first time, it was proved that this region is not inert after all.

But this is was not enough for Rachel to definitively junk the junk hypothesis. “We needed to find out the function of these transcripts.” Further testing showed that these transcripts would go on to physically mix with another transcript produced from a gene situated in chromosome-1.

This mixing called ‘splicing’ is an important modification that happens before protein synthesis. Splicing refers to the editing of the mRNA to produce a more mature mRNA that is ready to code for proteins. Usually, it involves the splitting of the mRNA, the disposal of the unwanted portions, and the rejoining of the wanted portions.

A schematic explaining splicing – to put it simplistically, the mRNA’s useful parts (exons) join together and the useless ones (introns) are subtracted. In the case of Rachel’s discovery, the 5`UTR region of the chr1 mRNA was shown to come from the chrY mRNA.

When a part of mRNA from one chromosome splices into the mRNA from another, as was happening between chrY and chromosome-1, it is called ‘trans-splicing’. This is exceedingly rare. Rachel’s team not only discovered this but also found out that this trans-splicing by chrY was important to regulate how much protein the chr1 mRNA should synthesize and when the protein synthesis should occur.

What does this all mean?

The most exciting part of this discovery was that this trans-splicing event happens only in the cells of the testes. From Rachel’s experiments it was clear that chrY is regulating a gene that is transcribed specifically in the testes. What does this tell us, she wondered. Firstly, it shows that this DNA in the chrY that was once considered junk is regulating protein synthesis in testes even though this region does not code for any protein itself. “No trans-splicing between coding mRNA and noncoding mRNA was known till then – and none with chrY. So this means chrY may not just be sitting there determining sex and doing nothing else.”

Secondly, this region in chrY is species-specific, Rachel pointed out. The sequence they were studying was present only in humans, not, say, in mice. “You see, male fertility is being regulated by species-specific repeats (this region) present in the chrY. So if by chance some repeats from another species come, they cannot regulate genes involved in human male fertility.” This fits in with our knowledge that cross-species fertilisation does not work. “Man cannot cross with mouse, clearly.”

Fundamental discoveries like these are adding new dimensions to what we know about the human genome. Even though lesser than 2% of the genome code for proteins, today, over 75% of the genome is known to be transcribed into mRNA. These RNAs may not make it to the protein stage but they all have some function or the other. “100% of the genome will have a function,” affirms Rachel, “we just have to discover it.”

This study done in Rachel’s lab was published in Genome Research journal in 2007, and was considered a landmark of sorts. In fact, it even came up for discussion in both houses of the parliament that year, revealed Rachel. “It was the time we thought India lost out in the Human Genome Project. This study came up to show that Indian scientists are still discovering novel transcripts and functions, so how can you say that India did not contribute? That was the discussion.”

To bolster their findings, Rachel and her colleagues experimented with mouse chrY and here too they found non-coding RNAs involved in regulation of autosomal (other than sex chromosomes) genes in mouse testes. “This proved that it is not an isolated event we found in the human genome but seems to be a pervasive phenomenon.”

The ‘basic intuition’ that basic biologists so rely on to design their studies may or may not be something they are born with, but what is certain is that years of training go into honing that skill. For Rachel, signs pointing her to a life of science started popping up early – in the form of back-to-back scholarships.

“I grew up in Kottarakara, a town in Kerala. I did my basic education in a Malayalam medium school there,” she said. “I used to love reading scientists’ biographies. Marie Curie was a favourite.” Curie’s achievements despite coming from a modest background resonates with Rachel. “I believe it’s not the school that matters but intelligence. Good students will come up anywhere.”

Though her parents were school teachers, she recalls her father being very academically oriented. “He made me write these exams. Through one such exam in my class six, I got something called the residential school scholarship (this was given to 200 students all over India).” With this, Rachel got admission to the Rishi Valley school, still considered one of the best residential schools in India.

After finishing her schooling in Rishi Valley, Rachel continued her impressive run by securing herself the science talent scholarship (now evolved into NTSE). This scholarship would facilitate her education in the basic sciences up to doctoral level. “My journey in science began with this. After doing my BSc and MSc in zoology at Women’s College in Trivandrum, I left for Banaras Hindu University to do my PhD.” At this stage, Rachel had also won the CSIR fellowship to aid her research.

Rachel joined CCMB in 1976 and 30 years on, “I’m still enjoying the basic sciences!” Almost sixty, Rachel is due to retire in five months (“Do you still want to interview me?” she’d asked, earlier).

Grateful to India, yet worried

Though she completed a couple of postdocs in US universities, Rachel was not significantly tempted by the idea of settling down there. And there were many opportunities too. “During a conference in BHU, I was even invited by a professor to come do any work I liked in his lab. But I thought why can’t we do good work in India, why should we go out always? I also had that feeling of – India nurtured me, gave me scholarships – so why can’t I do good work here.”

Which is not to say that doing science is a smooth ride here. “There are definitely ‘n’ number of hurdles in India,” admitted Rachel. “The scientific atmosphere in India needs to change. They are trying to introduce too much of bureaucracy. They don’t leave scientists alone.” Interestingly, she is not talking about the government but scientists themselves, the ones at higher levels. “Scientists themselves do politics. And honestly, in the last 30 years, I have only seen it getting worse.”

“You need a free mind. Leave the scientists alone. The government gives us projects so that we can work regardless of red tape, but the execution is really not good. The minute people come into power, they try to prevent others from doing science. I resent that.” Rachel suspects that this culture could be what is preventing India perhaps from rising as a world power in science.

Rachel never felt discriminated as a woman in her career, though she says that it could be because she had more time and energy as she did not get married and start a family. She joked, “I used to like standing up and telling the men what the Y chromosome does! Ha ha. I’m a lady and I’m doing this. Just fun times…”

Not much of a retirement

Now that she is approaching her retirement, Rachel has some plans, but none of them involves sitting back and taking it easy. “I don’t care for power, position, I just want to be left alone to do science. [This attitude] has helped me so far but I still have work to do – I have two DBT projects which will go on till 2019. Once the director gives me permission, I will continue till then – here or anywhere else.”

And after that, Rachel wants to continue contributing, but in a different way: “As long as I can, I want to be energetic and active. The rest of the time, I want to devote to the havenots – children especially.” She already volunteers with organisations like Don Bosco to interact with street children, and she’d like to give more time to this. “After retirement I will go and work with one of the mission fields of the churches. Somewhere where the need is. Hyderabad has been home, but I don’t know what the future holds. It doesn’t – shouldn’t – matter where I am as long as I can help those who need it.”

Rachel proudly shows of her newest ‘toy’ the minION, a pocket-sized device for DNA analysis