A molecular Geneticist at University of Delhi 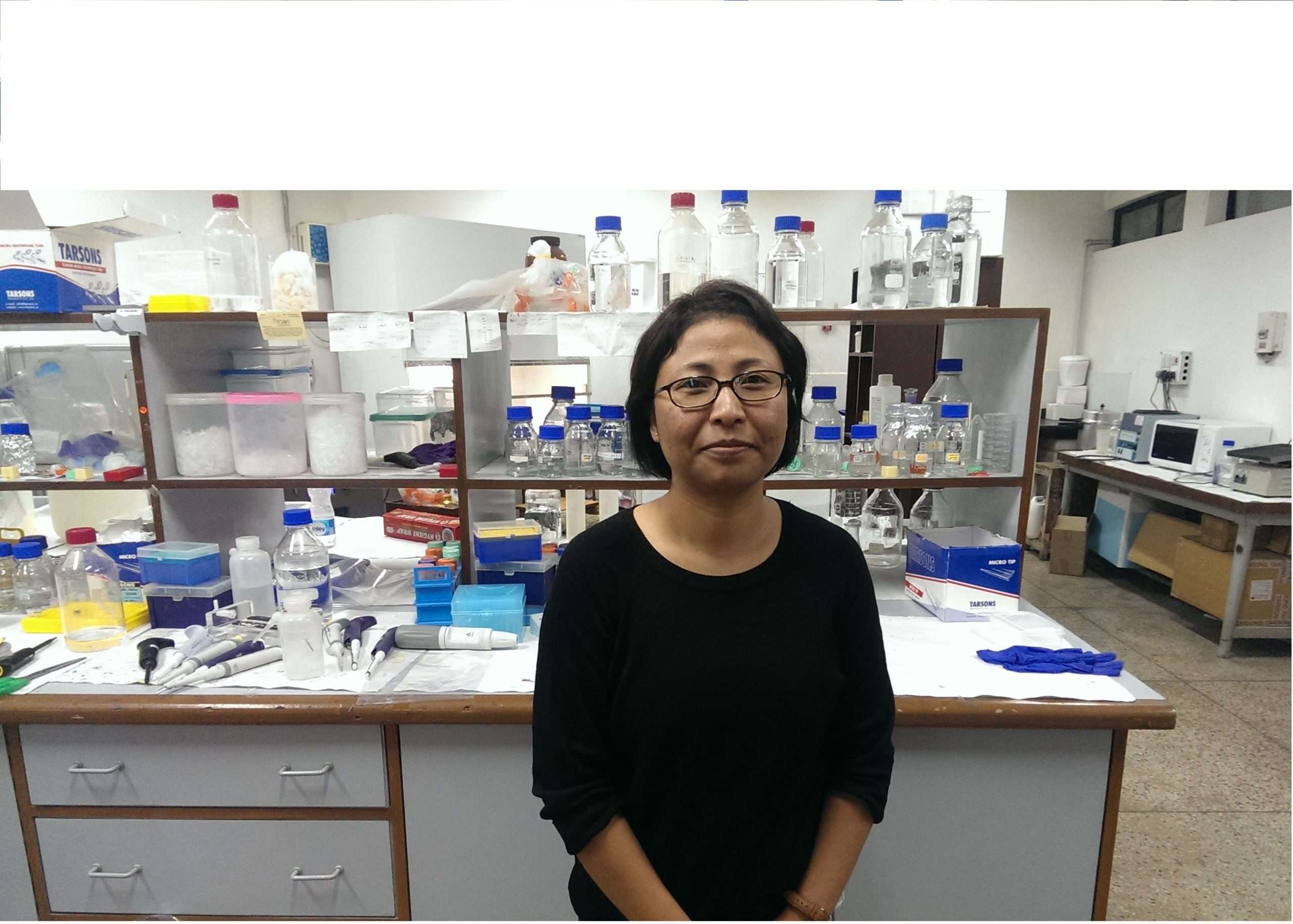 WHERE? University of Delhi, New Delhi

Picture a racetrack shaped like a maze. The contestants arrive from all over the world, shielded carefully from the public. They’re fierce, ravenous. Once they enter the maze, they have only one goal – to reach the pool of food at the end. There are not many rules; in fact, the organisers encourage the racers to indulge in some genetic tweaking and chemical doping if that’s what it takes.

As much as this sounds like the plot of a sci-fi movie, I’m just talking about the Dicty World Races, a microbial Pac-Man of sorts. The maze or the racetrack is made from silicone and the contestants are a type of soil amoeba named Dictyostelium discoideum and dubbed Dicty, or ‘slime mold’. The ‘food’ is a chemical or a chemoattractant that is present throughout the maze but in rising concentrations from the start to the finish line.

The first Dicty Races took place in 2014. Teams of scientists from around the world groom their line of Dicty cells by engineering their genes to make them win. This could be by making them better chemical sniffers or more flexible while navigating or less sticky to the maze surface. The winner is the line of cells to navigate most accurately and reach the pool of chemical at the end the quickest.

This whole ‘game’ sounds like a lot of fun, but that was not the point behind it. Dicty cells are a favourite among geneticists, confirmed Aruna Naorem, a faculty in the Genetics Department of the University of Delhi who studies these organisms. Not only are they abundant, they are also ideal organisms to study at a DNA level – despite having some intriguingly complex behaviours. The Dicty Races are modelled on a phenomenon called ‘chemotaxis’, which is how some of our immune cells locate invaders and fight off infection. Aruna has not taken part in these races but she studies another, yet related, aspect of these amoeba.

“Dicty cells can sense everything – heat, light, food – just like our own cells sense glucose. They will eat whatever you offer but they are especially attracted to specific kinds of bacteria that secrete folic acid,” said Aruna. Well-fed cells then go on to divide and their population grows – this is called the ‘growth phase’. Dicty cells may be voracious eaters, but these cells are also incredibly resourceful in food-deprived conditions.

Once the bacteria in their vicinity is over, Dicty cells begin to secrete a chemical called cyclic AMP (cAMP). cAMP attracts nearby hungry Dicty cells and then the ‘development phase’ begins. “The starved cells all come together to form this beautiful structure (in pic) and finally a fruiting body containing spores that can withstand high temperatures, water salinity, etc.” explained Aruna.

A Dicty cell moving towards food

During this aggregation phase, cells don’t divide. They conserve energy by keeping metabolism low. Only the most crucial genes continue to be active and proteins are broken down to make energy for the development process. “That’s why this [species] is called a social amoeba,” added Aruna. ”When you are starved and alone, you have a 100% chance of dying, but if you come together you have an 80% chance to stay alive as a spore. Some of the cells are so good, so altruistic that they choose to die to support the spores on top, so that spore dispersal can happen.”

Spores are hardy and easily dispersible by wind to other areas where food is available (this could be just a few centimetres away). There, they start the growth phase again and begin to repopulate.

In humans, development refers to the single zygote’s (the product of sperm+egg fusion) journey from a single cell to a human organism with distinct organs like the lung, heart and the brain. This is so complex that we are still struggling to identify which genes in humans need to be switched on/off for a cell to develop specific functions (eg. heart cell or lung cell). In Dicty, things are simpler. “In Dicty, there are only two cell types – one is going to die (the lower part of the fruiting body) and one will live (the spores). So it’s easy to ask what are the signals that ask a cell to fall into which type.” Aruna studies this and identifies genes that can act as markers for spore formation; i.e. if that gene is active in a Dicty cell, it will become a spore.

A fruiting body made up of multiple Dicty cells (Source: Wikimedia Commons)

Currently, one of Aruna’s projects involves identifying the proteins that are responsible for setting off the development phase of these amoeba. These proteins are called transcription factors. Dicty cells are easy to culture in the lab – it is only a matter of simulating starvation-like conditions and waiting a few hours for development to begin. To confirm if a gene is playing an important role, Aruna and her team use the technology of ‘knocking-out’ a gene and then observing what happens to Dicty cells.

Using this technique, she determined that a transcription factor called BZPG, found localised in spores, is important in the Dicty life cycle. “The beauty is that if you knock out this gene or reduce the level of this protein, it actually manifests in this development phase. When we reduce the level of BZPG, smaller spores are formed which are defective in germination.”

Finding her way in academia

Born and brought up in Kakching, a small town in Manipur just 10 km from the Myanmar border, young Aruna was sent to the capital city of Imphal to do her 11th and 12th standard from a bigger school there. At first, she lived with her uncle, but when her sister joined the following year, they moved into a rented apartment. Having aced chemistry and biology finals, Aruna got herself into a BSc Chemistry course at Delhi’s prestigious Miranda House women’s college. There was a lot of biochemistry in her syllabus and biotechnology was the buzzword. In the all-India entrance examination for biotechnology courses, Aruna secured admission for her MSc in Kerala’s Calicut University. And so, the young chemist from Manipur was set to make another big move, this time all the way down to the south of the country, almost 4,000 km from home.

After this, Aruna managed to get a place in the Indian Institute of Science (IISc), in Bengaluru, to do her PhD, before she moved back to Delhi to do some short post-doctoral work at JNU. While at JNU, she heard that DU’s Genetics Department was hiring assistant professors. She got the job and began her stint here in 2009. Aruna is single and currently lives on campus in the teachers’ quarters with her younger brother who is also a researcher, but in urban planning.

All this travelling, was it wanderlust? Or perhaps part of some plan? “I’m normally very bad in planning,” admitted Aruna with a smile. “If I plan something, it doesn’t work, so I go with the flow. Whatever comes, I take it. I had developed an interest in biotechnology, so I thought okay, I like it so I better pursue it…” Though she managed to earn places in one prestigious institution after the other, the journey has been a tough one. “For me, everything was a struggle from the beginning… in the sense, [I was never able] to stay in one place. So many shifts, renting accommodation… just to study.”

Her growing years in Manipur were challenging too, she said. “Kakching is known for its high literacy levels but in Manipur, we don’t have much resources and facilities. That’s why most of us leave elsewhere to study. My classmates who chose to stay took almost five years to finish their BSc. There are a lot of troubles. For students, it’s like – you can go, but it’s your loss if you get hurt or killed while going to school.” Things seem just as bad today in Manipur with Chief Minister Okram Ibobi Singh calling the situation there a ‘humanitarian crisis’.

A market at Kakching

She recalled, amusedly, skipping her first day in 12th standard in Imphal to participate in a strike. “It was a silent march to demand justice for a teacher who was beaten up because he prevented someone from copying in the exam. It was a genuine strike, for a good reason,” said Aruna. “I was always quite a rebel – I had to be because I had to take care of my three younger siblings back at home. But still I was thinking ‘my goodness this is the first day of my school and Imphal is not even my place, I don’t know where to go!” she laughed in reminiscence.

Things turned ugly at the march when the police started a lathi (baton) charge and used water cannons and tear gas against the peaceful protesters. “All human rights are violated there actually.” Wasn’t she scared? “No. I wasn’t scared, just tired…. yes, scared too,” she conceded. “We were seeing water cannons for the first time – we didn’t expect it.” Aruna and a few other protesters were ushered into an empty cinema hall by the helpful caretaker so they escaped injury. She managed to find her way back to her uncle’s home thanks to strangers who were very helpful seeing a lost girl clad in school uniform.

Despite the difficult times and the distant lands, Aruna exudes a cheery and chirpy persona. “Being able to adapt gives me this flexibility. For example, in Kerala for two years I could not eat any of their rice – it’s not sticky, you know? I used to joke that if it falls on your foot, your big toe will be gone,” she laughed. “There were times when it was intolerable to eat but later I realised that if I have to live I have to eat this. It gives me the strength to tolerate anything,” she added, more seriously. That’s when it struck me, how Aruna’s philosophy somehow found meaning in her research – just like the organisms she studies, she too derives strength from her ability to adapt.

Why do women drop out?

Social hurdle – “In my lab, all are girls. I know I have 50-50 chance they will stay. When we train them, we train them to go for a postdoc and then take a research position suitable for them, but they (the women) always settle for a lower one, whatever is convenient to them. Many of them go for teaching jobs or other jobs. They always go with [listen to] their family. In university, we are hired to teach. The research each PI (principal investigator) does is out of their own interest, the university has nothing to do with it. So when a student comes in and breaks that interest it becomes quite annoying, yes.”

Logistical hurdle – “There’s no hostel facility to girl students who come here for training, only for boys. We’ve made so many requests. In fact, Delhi Development Authority (DDA) has cleared permission to renovate the existing girls’ hostel and add more floors but the University is not doing anything yet. Two of my students from the north east have somehow found accommodation.”

1 response to "Aruna and her Hungry Amoeba"

The Dicty game reminded me of “Game of Life” coding project that beginner programmers are often encouraged to do. Some of the profiles on this website have areas of research I couldn’t have possibly imagined. I consider myself enlightened. Thank you!