Into the Core of Ancient Climate with Ayusmati

WHERE? National Institute of Oceanography, Goa

Under the Bay of Bengal, a three-meter deep layer of the planet’s surface lay undisturbed for the past 10,000 years until the crew aboard the scientific vessel Marion Dufresne extracted it. The French ship boasts of a state-of-the-art ‘corer’ named Calypso that dug into this seabed at the Krishna-Godavari basin off the shores of Andhra Pradesh.

The ‘core’, composed of sediments that settled underwater, thousands of years ago, was packed and stored carefully. Eventually, it found its way to Ayusmati in Goa, who was embarking on her PhD project in 2013.

Since the day she met her sample, Ayusmati has been studying it thoroughly. First, she geologically dated it to confirm that the sediment was formed 10,000 years ago. She then made subsamples and began a multitude of experiments to test the biological, geological and chemical, together called the biogeochemical composition of the core.

It’s atoms and molecules tell the story of the past, making the core an archive that equips Ayusmati to estimate the paleoclimate – Earth’s climate when this sediment formed thousands of years ago.

“Actually the most common way oceanographers study the Paleoclimate is with fossils of ancient organisms foraminifera,” Ayusmati said as we started the interview about her research. The sulphur and calcium carbonate from the fossils are inorganic ‘proxies’ for past climate. But Ayusmati uses another strategy; her focus is on the core’s organic geochemistry.

Each of the organic elements (which are what the bodies of lifeforms are predominantly made of) like carbon, oxygen and nitrogen are preserved under water in different forms or isotopes, which vary in the number of protons and neutrons in their atoms. For example, some of the oxygen atoms are heavy and some are light. By comparing the ratio of heavy and light isotopes in the core to a geological standard, Ayusmati can get clues about the past climate.

“These isotopes not only answer questions about the paleoclimate but also fill the gaps in our understanding of the nitrogen cycle, carbon cycle and the overall biogeochemistry involved in the ocean,” she said.

Another ‘proxy’ that Ayusmati studies, is the indicative marine plants that compose her sample. Studying the carbon isotopes in the core can tell which kinds of plants lived at that time. This is a major clue to the monsoon patterns that existed at the time when very few humans roamed the planet.

Besides earning Ayusmati her PhD degree, these proxies will serve as the missing piece of an important puzzle. “Until now, it has not been possible to accurately model future climate patterns because of the complex and restless nature of our planet’s climate. Knowing the major events in the Earth’s climate history will enable us to make better predictions and prepare, say when a cyclone is going hit our nation.”

Ayusmati shows her ability to look at the big picture, as all Council of Scientific & Industrial Research (CSIR) scientists are expected to while explaining the applicability of her research. “With our analysis, we can report important weather events that have happened in the past. With this information, my colleagues in the physical oceanography department – the mathematicians – can make better and better statistical models to predict future climate.”

“For example, we can observe events like the El Nino, which occurs every 2-7 years. In this way, the frequency of a weather event can be predicted. We can say that this kind of event will repeat in this particular year or predict that monsoon will be heavy in this year or warn the country of a cyclone that could impact its economy with so much severity. Such predictions can enable preparation that can save lives and secure the future of the country.”

Being discovered as a scientist

“Mine is a different story,” she started off.  “When I was doing M.Sc in Utkal University, Bhubaneshwar, I was not a very serious student.” But an incident changed her attitude. “While I was in the library reading a scientific magazine, a professor, Dr Kirti Ranjan Mallick, passed by and asked her what she was reading. “I wasn’t into hardcore geology, but the article was about North Atlantic Oscillations.” To demonstrate her interest he asked her to prepare a presentation on the subject the next day.

“I went to the cyber cafe and made a PowerPoint and gave a presentation to him.” Dr Mallick challenged her with more presentations, trying to gauge her interest in geology. “He gave me multiple assignments and I slowly started getting interested. When I asked him what topic he had done his research on, he said sedimentology.” He went on to mentor her in sedimentology and eventually it became her own research interest as well.

Ayusmati holds her mentor in high regard. “In his NET exam (an all India exam that all future scientists must clear to get a research seat at one of the prestigious central government institutes), he was rank No 2.,” she said in awe. When the time came, Ayusmati was not far behind and was ranked no. 36 in the qualifying test that over twenty thousand hopefuls take every year. “I applied to Physical Research Laboratory, Ahmedabad, and NIO. And here I am,” she said smiling.

Ayusmati confessed that most families in her home state (Orissa) are reluctant to send their kids – girls or boys, far away for further studies. Her parents were supportive but still feared for her safety. Again, her mentor paved the way. “Sir told my father that I have scientific introspection that he hasn’t seen in other students. There were many boys in my class too.” This statement not only convinced her family but also got Ayusmati to realise her own ambitions.

At NIO, a CSIR institute, she found another inspiring mentor to guide her through her early scientific years. She is glad to have access to all the sophisticated instruments NIO stocks. “We have the all the mass spectrometers we need – even the ICPMS (Inductive Coupled Plasma Mass Spectrometer and IRMS (Isotope Ratio Mass Spectrometer), which are very precise machines that are used to detect and measure isotopes. We also have GCMS (Gas Chromatography Mass Spectrometer) and we are getting a multi-collector ICPMS this year,” she told me proudly.

“But now we are being asked to do more and more applied science.” This is kind of annoying for Ayusmati. “They say our work should have direct application to society otherwise no one will recognise it. Funds are also sanctioned with this in mind. The core research I am doing does not have a direct applicability. What process is going on in the earth – that I can tell you but what instrument or product to make from this knowledge is an engineer’s job. And I’m not an engineer.”

Her guide insists on the scientific method, which Ayusmati’s thinking aligns with. “Sir tells us – ‘have a theory’ and look for evidence for it and not simply go after parameters that others have covered.”

For those who indulge in “lab politics,” she has a message: “Your data is not same as mine. Trust your data and interpret it in your own way. And let’s think logically so we can derive a pattern that is taking place in reality. Our ultimate aim here is to understand nature, isn’t it?”

Now that she is 25, Ayusmati’s parents back in Bhubaneshwar think it is the right time for her to get married. “They are forcing me now but then I’m here so they cannot say much. I want to wait till I finish at least my PhD because this work is tedious and it will prove to be a headache otherwise.”

She is positive that her marriage will not derail her plan of a post-doc among the geology greats at the Alfred Wegener Institute for Polar and Marine Research in Germany.

There are only two reasons why someone would do research – according to her. One, they can’t find anything else to do or two, they are passionate about science. Ayusmati clearly belongs to the second category. “My friends are in Geological Survey of India, ONGC (Oil and Natural Gas Ltd.). I could have been there too, getting a good salary. If not for my interest why would I choose to break my head for five years to get a degree? No one does research for money.”

“I know I’m here because I’m passionate about the slow processes of Earth, of nature. Everything takes time but everything is accomplished and has a role to play. I like to explore these processes scientifically.” 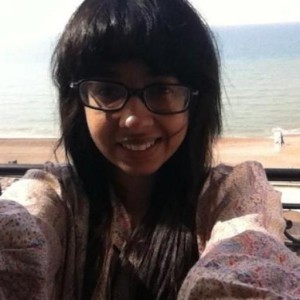