An animator-filmmaker at Industrial Design Center, in IIT Bombay 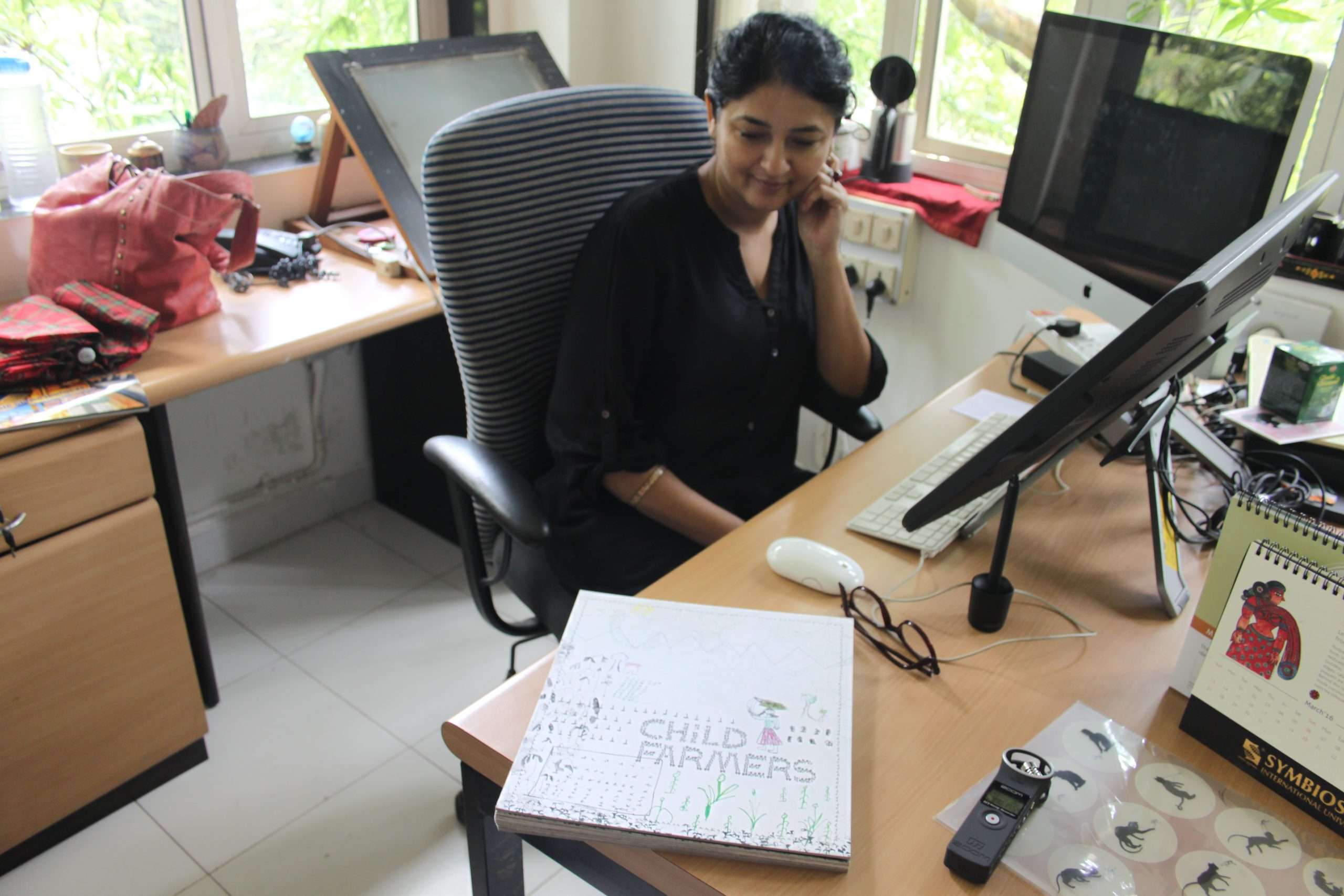 WHO? Shilpa Ranade, 50
WHAT? Animator and Filmmaker
WHERE? Industrial Design Center, IIT, Bombay

It is not easy to become one of India’s best animators. It requires, as Shilpa Ranade’s journey testifies, that you pursue your own real interest.

Her animations are mirrors reflecting people’s lives in society. Films that silently study social phenomena, as hers do, are a result of thorough on-the-ground research. This, says the designer/animator/illustrator/filmmaker, she “can’t do without”.

Recently, Shilpa’s research took her to Vidarbha, a district in Maharashtra infamous for farmer suicides. “But how much do we really know what happens there? Media reports just tell us that ‘x’ number of farmers killed themselves. Vidarbha is not far from here (Mumbai), so I wanted to make something that helps youngsters in the urban schools understand what is happening in their own neighbourhood.”

Each frame in Shilpa’s work drags with it the context surrounding a social reality, that a statistically foolproof scientific study usually misses out on. “It is very important to bring social issues up. But not in a way that kills the issue with very blatant directions to do this and not do that. It doesn’t work like that. It has got to provoke thought and stay with people.” The hope is that somewhere along the line, it will inspire a collective positive step.

The secret to adding such a texture to your work, Shilpa’s reveals, is honest and objective research, but also, the kind of research you do, so to speak*, with your right brain.

*Note: The popular belief/myth that the right side of your brain is responsible your creativity and the left hemisphere for the logic has been debunked by neuroscientists many times.

A round trip to IIT 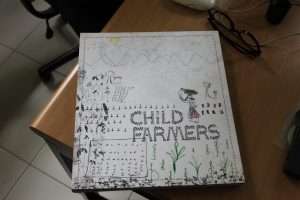 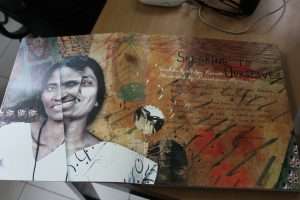 Her weeks of travelling through villages in Vidarbha, interviewing sixteen families that lost their primary bread winner to suicide due to crushing debt, have yielded an illustrated book called Child Farmers. Apart from the interviews, the book has stories, confessions, drawings and poems by the children of these families.

The material Shilpa collected was transcribed, translated, turned into chapters, written and illustrated by young artists and writers. One of the stories by Shilpa herself with testimonials from the deceased farmer’s wives will take shape of an animated film, promised the professor, who set up the first ever animation graduate programme at IIT.

Thirty years ago, Shilpa was at the same institute, as a ‘visual communication’ student. After a skill-based degree in fine art at Sir J. J. Institute of Applied Art, “I came to IIT and I told them I want to do animation. They said I’m in the wrong place, yet I ended up spending two years here understanding design” at Industrial Design Center, which is IIT’s design school.

Even back then Shilpa was making films of similar “dark” flavour. One project she did was based on issues around exorcism rituals in Pune. “I found that there was this local healer called the ‘Devrishi’ many people would have sessions with in a big hall every Wednesday. And he would beat the ghosts out of the patients who were mostly women. They would reach a trance state and have intense cathartic experiences. They would scream and shout all the things that were going on their lives… sometimes there was a mother in law troubling them, or they would make demands like ‘I want chicken, I want liquor, I want sari’, things like that…” Shilpa made a film on this ritual, where the local healer attempted to “sort the patients out, but not really.”

Ater IIT, Shilpa’s interest in animation led her to a job at the studio of Ram Mohan, a prolific animator who was the only one with an animation studio in 1989. There, as in any commercial studio, a ‘pipeline’ of illustrators drew each frame of the film being made. This assembly line mode of animation did not interest Shilpa. She was warming up to a subtler eastern European style of animation, thanks to a film club she was part of since her college days.

“The films I saw triggered the desire to study animation. But there was absolutely nothing – no courses, no information, hardly any practising animators. Still, I knew this is what I want to do because it brought two of my interests together – film and image making. In six months I left the studio and joined the audio-visual unit at Tata Institute of Social Sciences.”

The next two years at TISS were spent making films on themes like mental health, blind parents bringing up sighted children and the social implications of art. But Shilpa’s desire to do animation still lingered. Determined to fulfil it, Shilpa went to London to attend an animation course at the Royal College of Art. The course did not teach Shilpa animation but expected her to explore the medium. This is the best way to learn, according to Shilpa. “Training in an exact practise or skill spoils you. If you learn the craft very thoroughly you get caught up in too many details.” 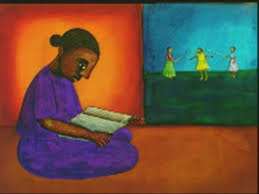 A still from Mani’s Dying

Her first animation film Mani’s Dying that has won many awards, was 12 minutes long, fully hand drawn, and inspired by the 1960 novel Kosala, a story about the Indian girl child. In an interview with D’source India, Shilpa explains the physics of Mani’s Dying: “In the way, the author had approached the writing, he had completely broken the notion of linear time. Each sentence would have the past, present, future all mixed up and I think that’s a very Indian notion of time. So that became the nucleus of the story.”

Armed with a couple of more films, the knowledge of her beloved medium – animation, and newly found project-based learning techniques, Shilpa returned to India. “I realised that we’ve got so much here in terms of stories, imagery, performance… we can make media that are more relevant to our culture.”

In 2001, she was back at IDC at IIT – Bombay, this time with a mission to set up a degree program in animation from scratch. The first batch graduated in 2006, with the degree Shilpa had come looking for two decades ago, unaware that she would be the person to set it up.

Since then, along with mentoring animators that make more than just cartoon animation, she has made several films and books that bring out several issues.

Her film The Harvest, which maps the changing narratives in iconic Warli paintings, started with an ethnographic study with the tribal artists. It shows that Warli art has a lot to say besides being a decorative art form. “I’ve been looking at Warli paintings for many many years now, tracing how their form is changing with changing time and changing lives. The language of the paintings have changed, the themes have changed, what they are saying has changed. I’ve been collecting their stories.”

Her most recent film is her first feature-length animation film called Goopi Gawaiya Bagha Bajaiya (GGBB). The film is an adaptation of a children’s story about two musician friends on an adventure written in 1915 by Upendra Kishore Roychowdhury. There have been many versions since then, including the series Goopy Gyne Bagha Byne by the writer’s grandson Satyajit Ray. “Generations of people have grown up with this story. The public imagination is completely fused with it. My challenge was to see how Goopy Gyne Bagha Byne can be remade in animation today and still touch people and not end up making the story terrible that someone says ‘oh no it spoiled GGBB for me’. I wanted to see if can it be relevant in a medium that children are familiar with and see if the story still makes them happy.”

Shilpa succeeded. GGBB has been screened all over the world to rave reviews and turned out to be very entertaining. Although the entertaining label is not something Shilpa intentionally chases. What interests her the most is the movement from one screen to another. To prepare for the film, she worked for months with master puppeteers in Karnataka to learn the basic movement of shadow puppetry. In her film, the subtle movements of handheld puppets leap from their shadow screen into Shilpa’s animation.

“There is a lot of basic entertainment anyway. I always wanted to do something that needed some engagement, some looking at and deriving from. It has to be very meaningful, whatever you do, especially something like animation since it is such a labour-intensive practise. A lot of time and energy goes into it. Making GGBB took me three years of sitting and actually executing it. At the end, it has to be something you can live with for the rest of your life.”

One of India’s top engineering institutions may not perhaps be the place you expect to find an artist like Shilpa, but here she is, redefining animation in a world where her trade is popularly perceived as frivolous entertainment.

On support, privilege and gender

Shilpa grew up in a travelling defense family with her two sisters. “One of the great things about my parents was that they always encouraged us to do whatever we were interested in. They allowed our interests to grow and nurtured them. Education was stressed upon. All three of us had to study not for some degree or the other, but furthering whatever interest we had through whatever formal education we could get.”

Shilpa is aware she is one of the privileged lot because she has seen that not all girls are as lucky. In the 80s, when she came to IIT, IDC was the only department with female students. “There were hardly any women in engineering then. In fact, even today in the huge campus, there are only two women’s hostels and all others (twelve) are for male students. So you can imagine the ratio.”

“Our society needs to develop a basic sensitivity to the fact that all individuals have same capabilities, no matter their gender or background.”

“Awareness and education are key. And women have to go out there – it’s not easy but we have to be stronger and not accept the discrimination that we are subjected to. As a society, we should start seeing each other as individuals and less as women and men… thoda toh (at least a little bit) post-feminist thinking has to come.” 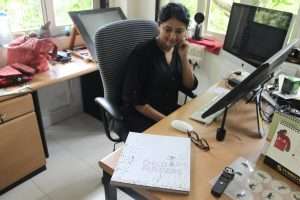