An ethnobiologist at Government College, Bassa in Himachal Pradesh 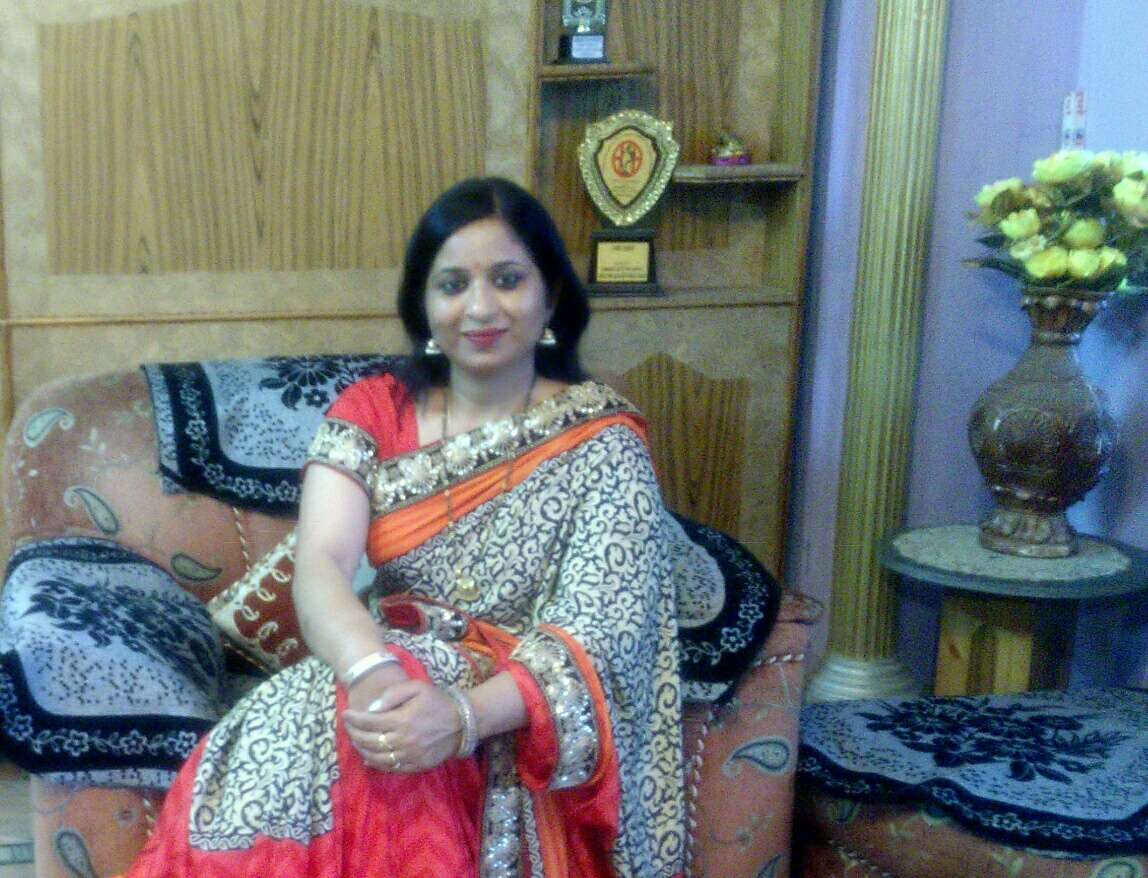 “People in rural Kullu, are bound to the forests and importantly their protection through their local deities (demigods) along with the rule of law. The fear of god is helping conserve the biodiversity of the national park,” Monika said, concluding her presentation on her most recent work on the influence of local traditions in conservation of the Great Himalayan National Park.

The end of Monika’s presentation signalled the beginning of the Q&A session. It started with the shaking heads of the two senior scientists, both male, chairing the scientific show-and-tell at Him Science Conference. They were both making the same point; they protested that relying on traditional knowledge for any conservation efforts would be a “step backward”. A discussion ensued between them, with Monika trying to get a word in unsuccessfully.

The five minutes reserved for Q&A with Monika, an opportunity for her to defend her research, were hijacked as the rest of us looked on, slightly irked. A classic example of sexism happening in the professional spaces, I thought. As many women would testify, and some have in The Life of Science project, female voices are being muffled with interruptions, undue judgment and apathy up and down this country.

Later, Monika sat down for a chat with me, where she talked at length about her life and her research. 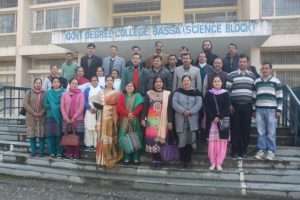 Monica with her colleagues. Image via Govt. College Bassa Website 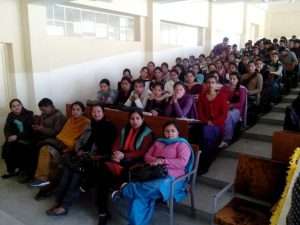 Local scientific conferences like this one in Himachal are a familiar territory for Monika. She participates as a delegate in as many as possible, each time presenting a review of her recent observations in biology and society that are often published as conference proceedings.

Hailing from the Kullu valley, where the Himalayas start to get steep and snowy, she is now a professor at Government Degree College, Bassa, in Gohar district, close to the princely city of Mandi. “At present, there is lots of work related to my college so I can’t do an elaborate scientific study. I can only focus on small topics which I find convenient along with my job.”

Her motivations reflect the eagerness of students and faculty from these far-flung institutes to break through the veil that separates them from ‘mainstream science’.

Things are looking up for Monika’s college. In recent years, hers and a few other local colleges have been making efforts to join forces and transform together into a cluster university under the RUSA (Rashtriya Uchchatar Shiksha Abhiyan) by the central government. “RUSA would create new universities through upgradation of existing autonomous colleges and conversion of colleges in a cluster,” the scheme’s website states. Grouping under university status will bring research facilities and scholars into these colleges.

This is very good news for faculty members like Monika, primed to take up research projects. The efforts are already fruiting, Monika indicated. “At work, I realise every day that there are so many projects that we can give the students relating to environment and society. Ours is still a degree college so we are not supposed to have research students (PhD.) yet… but from this year we can mentor M.Phil students.”

Her motivations reflect the eagerness of students and faculty from these far-flung institutes to break through the veil that separates them from ‘mainstream science’.

The journey into ethnobiology

Monika started her scientific journey in 2006 at Himachal Pradesh University, Shimla. “It was an epidemiological study (the study of disease incidence and distribution) of mental retardation and cancer patients. I collected the data from surveys with both kinds of patients. It was a complex comparative study, going through different kinds of cancers, genders, age and different problems/symptoms observed in the mild-moderate-high scale of delayed development in mentally retarded children, mainly Down’s Syndrome.” This work provided a realistic snapshot of public health in Himachal.

It often happens that scientific discussions, especially relating to climate change and conservation, go far into problem-solving without considering our ‘humanness’, encompassing variables like language, culture, and society. This fact hits hard in Monika’s reasoning. Somewhere along the way she decided to add people science into the mix as lacklustre biology did not offer real-world solutions.

“I changed my focus to society. Then I chose some subjects involving environment and women.” She elaborated: “‘Ethno’ relates to individuals and their society. The study of the dynamics between people and plants is called ethnobotany; the study of animals in relation to people is ethnozoology.”

After some studies on empowerment of women in Himachal and the impact of primary child healthcare on lives of women like this one published in International Journal of Research Studies in Biosciences, Monika felt it was time to drop all the baggage and head completely into the ethnobiology of the geography that she knew best. “I have shifted to environmental issues in combination with cultural practices. I’ve been studying the influence of local deities in Himachal, specifically some villages in Kullu.”

Monika is busy putting together a research proposal to University Grants Commission based on her preliminary observations in conserved forests in Kullu. “Without financial assistance and collaboration with other scientists, I won’t be able to finish this project.” 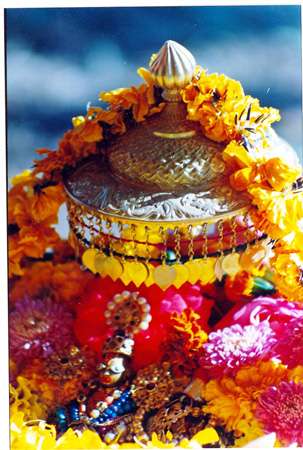 Raghunathji, one of Kullu’s deities

Kullu – sometimes called the Valley of Gods lies between 1600 meters and 6000 meters above sea level. Over there is the Great Himalayan National Park, spread out over a thousand square kilometres. This area is home to several species of animals and plants found nowhere else, making these mountain forests and meadows a critical part of global biodiversity. In 2014, the GHNP was given the status of a World Heritage Site.

Side by side with the snow leopards, blue sheep, white oak, alpine, lichen and hundreds of medicinal plants, live many gods. In 1999, when the area became a national park, thousands of people moved out into the surrounding buffer zone, but they left their gods behind.

Every Dussehra, locals go into the forests to pay their respects. The rest of the time they leave the forest and the gods alone. Kullu’s people take pride in the number of demigods they pray to; each Panchayat has its own local deity! The GHNP has been called a conservation success story, and we owe this is to the local deities, according to Monika.

Monika interviewed people old and young, observing their deity-related practices through the year and studying records of gatherings. In this information lies the premise of her future work: “Every culture has its importance. I want to ask whether local traditions and culture are playing a part in protecting or degrading environment? Can they indirectly save the environment?” 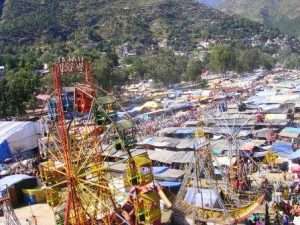 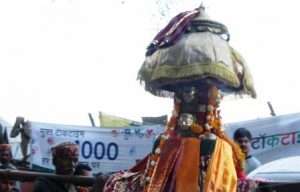 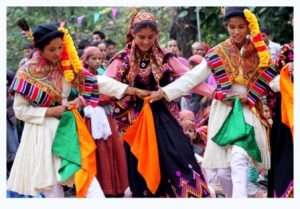 By lending an ear to the elders of these communities, those who see the national park in a different way than any conservationist would, Monika is mindfully refuting the scenarios where traditional knowledge is downplayed. For example, the claims made at the conference that such efforts “could be a step backward.” If she was given a chance, she would respond to the two scientists chairing her presentation in the same way: “I’m not saying that we should follow blind faith” but suggesting, with examples found in Kullu, “that there are solutions in traditional knowledge too, and by combining our modern technologies with application of these cultural methods, the efforts of conservation might actually be tangible.”

“The GHNP region has a distinct cultural mystique. The remote villages still have Devta or deity institutions which local people respect. The villages of Lapah and Ghat Seri have sacred tree groves. Village melas (fairs or festivals) occur year-round. They are colourful, multiple-day celebrations where the village gods are brought together for a consultation. One can watch the human spokesperson for the god (gur) go into a trance and tell local stories, answer questions, and interact with the village community. Local songs and dances are also performed and villagers dress in the best traditional costumes.” via http://greathimalayannationalpark.com/ 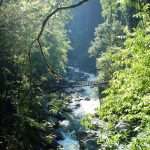 River side at 2100 m in GHNP via national park website 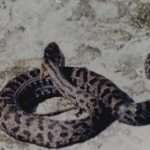 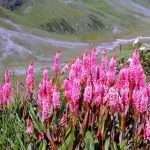 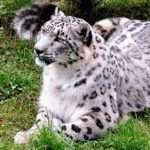 Sanjeeva Pandey, Additional Principal Chief Conservator of Forests, who served eight years as GHNP’s first director, said in 2014 on occasion of UNESCO  recognising GHNP as a World Heritage Site: “This, indeed, is a very significant moment in the conservation history of the Western Himalayas,” says  “There are so many small sacred groves commemorating saints who came here to meditate in the great sanctuary of Himalayas. This inscription as a World Heritage Site is an honour to the indigenous traditional conservation practices as well as those sacred places.”

Monika found that local deities seem to have a firm grip on the villages and the rules that people live by. She cited the example of the tradition of ‘Devdan’, vaguely translated as ‘Donation to God’. “It dictates that you take nothing from this forest and you don’t have to go there. Following this tradition protects the forest and conserves biodiversity.”

“Villagers are conserving the sanctuaries and the national park. Not only because they follow the rules put down by the government or forest guards, but also because of their local tradition channelled via a deity.”

Don’t be a doll

Monika grew up with two sisters and one brother. No special preference was given to her brother and all siblings had equal opportunity. Now married with two adolescent kids, she has the same kind of support. But outside her own house, things are not the same.

“I think women are dependent on men for so many things.” As she found in her studies with women in Himachal, just having a job is empowering, as is making decisions for the family and in the workplace. “Not being a doll” is empowering, she said.

Women have themselves to blame says, Monika. “They have the potential but need to explore themselves and change their attitude. It is a long lasting-struggling life. And put your efforts in everything.”

“In a job, you have to work as an officer, not as a woman or a man. If you work as women then different things will come at you. You have taken a responsibility so better be accountable,” she believes.

“Do more” seems to be Monika’s mantra. Despite her wide-ranging research interests, her prime focus is on teaching and encouraging her students to do more than they think they can. After 20 years in teaching, she is more positive than ever.

“Now with more facilities, social media, change is happening. The new generation is educated and better equipped. I teach in a rural college and the gender ratio favours girls. There are 5-6 boys and girls are more than double that. They get many opportunities, they are ambitions. Their parents are also sending them to faraway places to get experience, which was not the case before.”

“This is happening in rural areas too, not just in urban areas.”

3 responses to "Monika Lends an Ear to Tradition"