A biotechnologist at Shoolini University in Solan, Himachal Pradesh 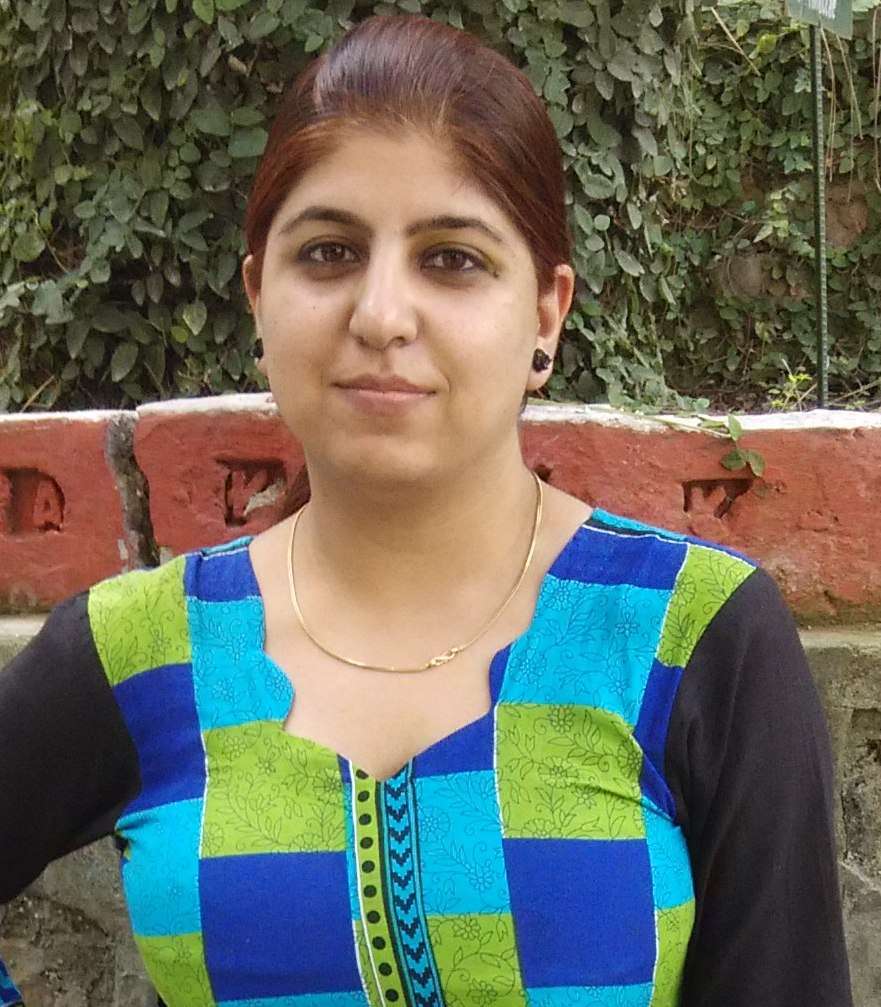 I met Shiney during the Him Science Congress that was taking place at a hotel in hilly Dharamshala. It was a two-day meetup of scientists mainly from the Him or Himalayan region including Himachal Pradesh, Jammu, Uttarakhand and surrounding areas like Punjab, Haryana and Delhi. Since the second day was dedicated solely to an award ceremony, all the academic proceedings had to be packed into the first day. At least three sessions ran simultaneously at one time, each five meters away from the other.

One of the talks on the main stage. Picture via Him Science Asociation’s facebook page

At the basement hall, the venue for the panel discussions, a hundred scientists sat surrounding a central stage on yellow bowed chairs. A Brazilian scientist who had been flown down as the special guest talked about her work in organic chemistry. It was a mixed audience, men and women in equal proportion and even a handful of foreigners. I could see a sea of nodding heads, sprinkled with the colourful confetti of dupattas, jackets and other formal finery the female scientists adorned with north Indian flair.

In a smaller room, a retired scientist was pleading younger researchers to bring back scientific focus to water quality, in a flash talk. Another scientist ran through her newly updated census of moth species endemic to Delhi. With a mothy taste in my mouth, I joined the lunch queue for some tandoori roti and mattar paneer. As we finished eating, I observed that the poster presentation was beginning to gather steam at the back of the hall.

Shiney was one of the 10 PhD students presenting a summary of their theses using a scientific poster. Like her peers, she stood in front of her poster and

answered question after question about the work she had done in the past four years. She was one of the few who had completed all her experimental work and now was busy writing her scientific saga or as some like to call it – a PhD. thesis. A familiar word, ‘lipase’, stuck out of her poster. She agreed to do a more in-depth interview so we moved our conversation into the now vacant flash talk room.

“The first thing I did was isolate some bacteria from the waste of the paint industry. Since a lot of oils are used for the manufacture of paint, the probability of finding bacteria that break down oils is very high. I screened 31 isolates (bacterial types) and selected the five which had the best lipase activity.”

Shiney’s research work is focused on bacteria which have the special ability to produce the wonder enzyme Lipase. Lipase-mediated chemical reactions are necessary to break down the long and hardy chemical structure of oily compounds. Lipases have many applications in the pharmaceutical, food and chemical industries, and as Shiney’s work shows, is also useful in the breakdown of pollutants released by industries. Of course, it is also secreted in our digestive system to metabolise fat.

Lipase makes it possible to break down the rigid long chains that make up fats and oils. This type of breakdown reaction is called hydrolysis. Producing this enzyme is time-consuming synthetically, so the Biotechnology industry has taken up the task of ‘harvesting’ these from prokaryotes (simple one-celled animals) like bacteria. But there are many kinds of lipase enzymes, each with different abilities. This is where Shiney’s work starts.

It is said that a PhD is a complete and thorough study of a single topic the scholar’s choice. At the end of it, he or she knows everything about that topic. Shiney seemed to have accomplished that. She has dug out of her laboratory everything there is to know about bacteria that synthesise lipase enzymes. 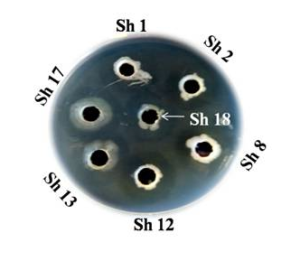 Zones of Hydrolysis on Tributaryn

After picking up samples from treated waste that came from a paint factory, she took them straight into her laboratory in Solan, Himachal Pradesh. The first biotech methodology that Shiney used was DNA sequencing, to identify what bacteria these were.

“I compared the sequences to a database of bacterial genomes and found these bacteria to be different species of the Pseudomonas and Aeromonas genus. They are named SH2, SH3 and so on…”

Now that she knew what they were, Shiney had to find out how fast and how well these bacteria are able to break down oils. For one of the tests, she grew the bacteria one-by-one in petri plates filled with a medium that was rich in tributyrin and 2-napthyl acetate. Once the bacterial colonies developed, she started to see clear zones or ‘hydrolysis zones’ around the bacterial colonies. The milky medium (nutrients on which bacteria were grown) turned clear wherever the lipase was active.The more the bacterial colony ate, the bigger the zones became.

Zones of Hydrolysis on 2-naphtyl acetate visible around every colony. Picture via Shoney Hangloo’s experimental work

She also tested the bacteria’s lipase activity on plates with industrial detergents Tween 20 and Tween 80. If kept unchecked these chemicals can be toxic to our environment and to public health.

Once she was sure these bacteria were producing active lipase, it was time to assess and compare the lipase activity of each of the bacterial types with quantitative tests. For this, chemical compounds that needed breakdown were carefully chosen to reflect – literally – the amount of lipase activity.

“The most commonly used method to do this is the hydrolysis of ‘p-nitrophenyl palmatate’. PNPP hydrolysis to PNP in a lipase reaction. The product that is formed is yellow in colour and its absorbance was measured in a spectrophotometer at 410 nanometers.”

Absorbance is the measure of the optical density of a coloured liquid. This indicates how dense the liquid is, based how much light it absorbs. A device that measures this, called spectrophotometer, is a must-have in chemical laboratories. “When light passes through any coloured compound, it absorbs some light depending upon the intensity of its own colour. So the more colour that is seen, the more compound there should be. On the basis of this, you can measure how much product is formed in the lipase reaction.”

A game of travelling hats

Out of the 31 bacterial types she screened, Shiney chose five with the best lipase activity. For anyone to continue working with these isolates, she had to ascertain how to best grow these bacteria. Shiney solved this puzzle by metaphorically flipping many hats on the bacteria to find the best fit for each.

“To find the best medium for the bacteria to grow on, chemical parameters that go into each medium were optimised. Different carbon sources were used. A lot of trial and error was used to grow the bacteria in minimal salt medium supplemented with different carbon source like glucose, fructose, sucrose, lactose were done. Different isolates show different optimum carbon sources. For example, SH2, SH8 and SH13 showed optimum activity in lactose, while SH12 showed the best activity in fructose.”

“Similarly, different nitrogen sources for the medium were also optimised… there are so many options like yeast extract, tryptone, peptone and ammonium chloride. Peptone was optimum for SH2, SH13 and SH17 and yeast extract for SH8.”

The depth of her PhD work covers many other questions about these bacteria. Some of them are: Which detergents can they tolerate? Which solvent works best for each of them? What inhibitors can arrest their lipase activity?  How much activity does each inhibit

I don’t care, I can go anywhere

It was her interest in genetics that brought Shiney from her hometown in Jammu to Pune University to study Biotechnology.

In Pune, during B.Sc and M.Sc, she started to find the subject “a little tough”. This made Shiney reconsider her decision to pursue such a hard subject. At that time, the inspiration to stay on the path came from her father, who originally wanted her to do engineering.

Beyond the bump of self-doubt, Shiney stood confidently, determined to meet the challenges of being a biotech researcher head-on. The family was aware that such a career choice is not so lucrative. Again, her father declared his support for her work and egged her on to the PhD.

Now, her experiments are done and Shiney is busy writing up her thesis, bringing all the evidence she has gathered together. The satisfaction of this phase is accompanied by other responsibilities in her personal life. “My parents held on to the marriage requests while my work was in full swing but now that it is done, the pressure is on.“ Shiney hopes to be married soon to a partner who, like her family, will support her scientific career.

“I don’t mind. I can go anywhere. After my PhD, I want to go into some industry. And later, if I get a chance, I would like to go abroad. I am open to working with a government institute where there is scientific work is going on. But it does take some time to get that kind of a job, so an industry job will be quicker.”

“I’m surely not interested in teaching. I don’t like teaching,” she tells me honestly, ruling out a professorship at a university. “One has to put in so much work and study hours as a researcher anyway,” that teaching would be quite an additional baggage, according to Shiney.

In her eyes, there seem to be more women in research than men. “At my university, more women are doing PhD. than men. Maybe because women have more patience, that’s why research suits them. Or maybe because men want money faster. so they don’t have so much patience for research work. I have found very few men do PhD.”

And then suddenly she remembered that the poster presentation was still underway and no one was manning her poster. “I will email you,” she said as she rushed out.