WHO? Prajakta Dandekar WHAT? Pharmaceutical biotechnologist WHERE? Institute of Chemical Technology, Mumbai Reported by Nandita Jayaraj I had a bad case of the cramps yesterday. As I usually do when this happens, I reached out for my strip of painkiller tablets and popped one. Within a couple of hours, I was fine again. Now […] 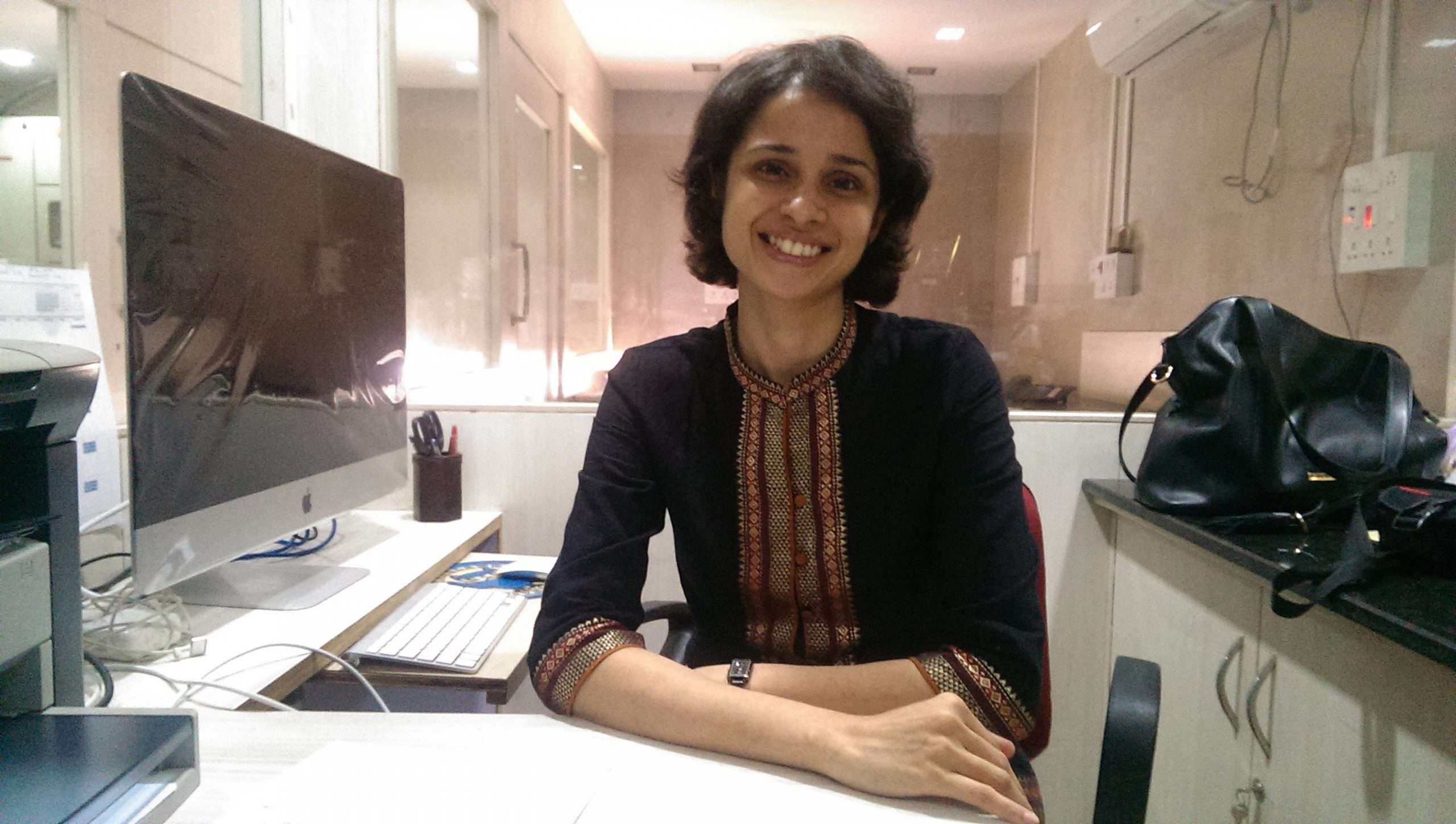 WHERE? Institute of Chemical Technology, Mumbai

I had a bad case of the cramps yesterday. As I usually do when this happens, I reached out for my strip of painkiller tablets and popped one. Within a couple of hours, I was fine again. Now I performed this monthly routine (if you’re not sure what menstrual cramps are about, go here) quite unthinkingly, but it turns out that I should count myself lucky that I’m getting away with it. Though this pill, and any other is easy to obtain over-the-counter, not everyone reacts the same way to it. For some, it may not work at all, and for an unfortunate handful it may result in adverse side-effects like nausea or dizziness or even allergic inflammations. Phew.

This is the case with almost all the medication we take. In fact, not just medication but any chemical we interact with in our daily lives – cosmetics, household items, industrial products – nothing is guaranteed safe. Sure, they are all probably approved by authorities after passing extensive tests, but none of these tests were performed on you, or even anyone like you. Most likely they were performed on animals and perhaps, following that, a small group of humans who shared neither your age group, nor your ethnicity, nor your family history, nor your gender, nor a thousand other things that make you different from everyone else. No wonder then, that we all react differently to many drugs.

It’s not even that such a generic way of developing drugs gets them to the market quicker – most take at least 10 years and a LOT of money, not to mention animal lives, to get approved. It takes that long to get access to and observe the animal models and conduct human trials. The whole process is lengthy and inefficient but for the longest time, it was the best available option.

A lot of that is changing now, and along with a relatively small group of scientists in the world, Prajakta Dandekar at the Institute of Chemical Technology, Mumbai, is helping make this happen. “In the last decade using animals has become increasingly difficult because of ethical concerns and the costs involved. We now need tech that can provide equally robust results so that we can reduce the number of animals that go into these investigations.”

Enter, organ-on-chip technology. An organ-on-chip is essentially that – an organ on a chip. It’s a representation of a human organ on a chip, the size of a memory card. “With this technology, it is possible to grow human tissues in 3D orientation. That would increase the likeliness of the tissue with an in-vivo (inside body) situation, so that is the idea,” sums up Prajakta, who heads one of the few labs in India which work on this technology. With this, there is now a model, of a human lung for example, that we can conduct tests on to more accurately estimate how well the body responds to a drug.

In her TED talk about this, Geraldine Hamilton says that this technique is paving the way for a “human-on-chip” where all the organs are connected enough to mimic a living human system. This will allow us to model what the effects of a drug might be to the whole body instead of localised effects. Moreover, these chips can use cells of a specific person, and we can have a Nandita on a chip or an Aashima on a chip and predict if my analgesic will work as well for Aashima as it does for me! The era of personalised medicine is beckoning.

Excerpt from Geraldine’s talk on how these chips work

“We’re simply trying to recreate in this tiny chip the smallest functional unit that represents the biochemistry, the function and the mechanical strain that the cells experience in our bodies. So how does it work? We use techniques from the computer chip manufacturing industry to make these structures at a scale relevant to both the cells and their environment. We have three fluidic channels. In the center, we have a porous, flexible membrane on which we can add human cells from, say, our lungs, and then underneath, they had capillary cells, the cells in our blood vessels. And we can then apply mechanical forces to the chip that stretch and contract the membrane, so the cells experience the same mechanical forces that they did when we breathe. And they experience them how they did in the body. There’s air flowing through the top channel, and then we flow a liquid that contains nutrients through the blood channel.”

At Prajakta’s lab, they’re not stopping here. “We want to develop our own scaffolds (the structure embedded on the chips) using only biopolymers (natural materials) which don’t impact the environment as much, as these are more biodegradable (than synthetic materials usually used).” One material they are exploring for this is chitosan, a marine bioproduct. The team is hoping to convert chitosan from acid soluble to water soluble so that it can be used as an alternative.

“If we process the scaffolds in our own lab, we hope the technology will be more affordable than commercially available devices,” she says. A rough cost calculation estimates an 8-fold reduction in price. “Commercially available chips cost Rs 8,000 online while we expect ours to cost just Rs 1,200.”

A daughter of the soil

Born and brought up in Mumbai, Prajakta is not only a daughter of the Mumbai soil but also, in a way, of ICT soil, the institute where she works now. Though she desired to study medicine, she was stubborn about joining a government college on merit. When that didn’t work out, she decided to pursue pharmacy as it was closely linked to medicine. That was how Prajakta first entered ICT. After the four year BPharm course, she was tempted to apply for a masters programme in the west. But when her visa got rejected, her disappointment didn’t last long. “I thought I would do some research in India before deciding whether to apply again.”

So she took up work at the lab of one of her BPharm professors Vandana Patravale. “That year changed my outlook about how research is conducted in India,” said Prajakta, “In her lab, we had the freedom to think up and develop our own ideas.”

In retrospect, Prajakta said she considers her first desire to go abroad naive. “It was more of ‘okay, people from my batch are going, so I want to do that too’” Her experience in Patravale’s lab changed her mind and she decided to pursue further research in India. Prajakta went on to do her MTech in Bioprocess Technology, also at ICT, and continued to finish her PhD. in the same institute in 2009.

Having completed her doctorate, Prajakta once more began thinking about doing a stint at an international lab to get some exposure. This time, she was better equipped professionally, as well as personally. “Immediately after my PhD., I got married to my labmate, Ratnesh Jain who also had similar ideas.” Things fell into place perfectly when the duo secured separate post-doctoral fellowships – Ratnesh the Humboldt fellowship and Prajakta the Marie Curie fellowship.

They ended up working in the same lab in Germany for the next two years and it was here that Prajakta began the project that she is most proud of today. “I was working there with a chemistry group. We developed a polymer called Polyrotaxane that could be used for the intracellular delivery of siRNA for therapeutics.” siRNA is short for small interfering RNA, a type of molecule that is designed to target specific disease genes and obstruct its progress.

However, one big challenge to using this Nobel Prize winning technology for therapy is ensuring they are taken to the site of requirement. Polymers like the one Prajakta and Ratnesh’s lab developed can help deliver the siRNA to the right tissues. The siRNA they were working with could block the production of a protein that was crucial for tuberculosis bacteria to survive. The paper they published on this made it to the cover page of Journal of Material Chemistry.

“The work on siRNA and the two years I spent in Germany gave me a lot of direction,” said Prajakta. “I encourage researchers to spend some time in India and give back to the country, but having international exposure does change your outlook,” she admits. For Prajakta, most valuable was the diverse populations and cultures she got to interact with. “You get to know their viewpoints about science, it helps you develop overall.”

While in Germany, Prajakta and Ratnesh talked about whether it would be wise to continue in academia or move to an industry job which would definitely pay better. “We decided that balancing family and professional life is easier in academia.” So when a chair position opened up in ICT, Prajakta applied and got through. Today, Prajakta and Ratnesh are labmates at ICT again. But this time, they are on the other side, as assistant professors. “It’s not that there are no struggles now, but with my family close by to take care of my daughter, I’m lucky.”

Research in biology requires a lot of patience, reminds Prajakta. “Even if your experiment is based on sound rationale, there are chances of failure.” It has happened to her too, but what’s important is continuously trying out alternatives. “That is what keeps you going. Anyway, science is not about things turning out to be positive. Even understanding why something doesn’t is important and if you publish this work, it’s going to stop somebody else from spending that much amount of time in doing the same thing.”

That is one of the merits of publishing, opines Prajakta. “It’s not just to build my CV but also to disseminate information. It opens possibilities to collaborate with other labs or even with industries.” This is important for research institutes which have limited funding. If they want their product to reach the marketplace, partnering with the industry can make a huge difference.

Prajakta cited the example of a dental surgeon who approached her after having seen her published work. “He wanted to test a scaffold which was developed by a company in the US clinically in patients.” Her lab is now helping investigate the scaffold. “Ultimately, we are trying to establish the efficacy and toxicity of a new material which is going to be available to the patients. So indirectly we are contributing to that material being established in the market.”

4 responses to "Prajakta and Her Lab on A Chip"