Radhika calls her path to cancer biology unconventional and rather twisted. Find out about this cancer biologist's journey. 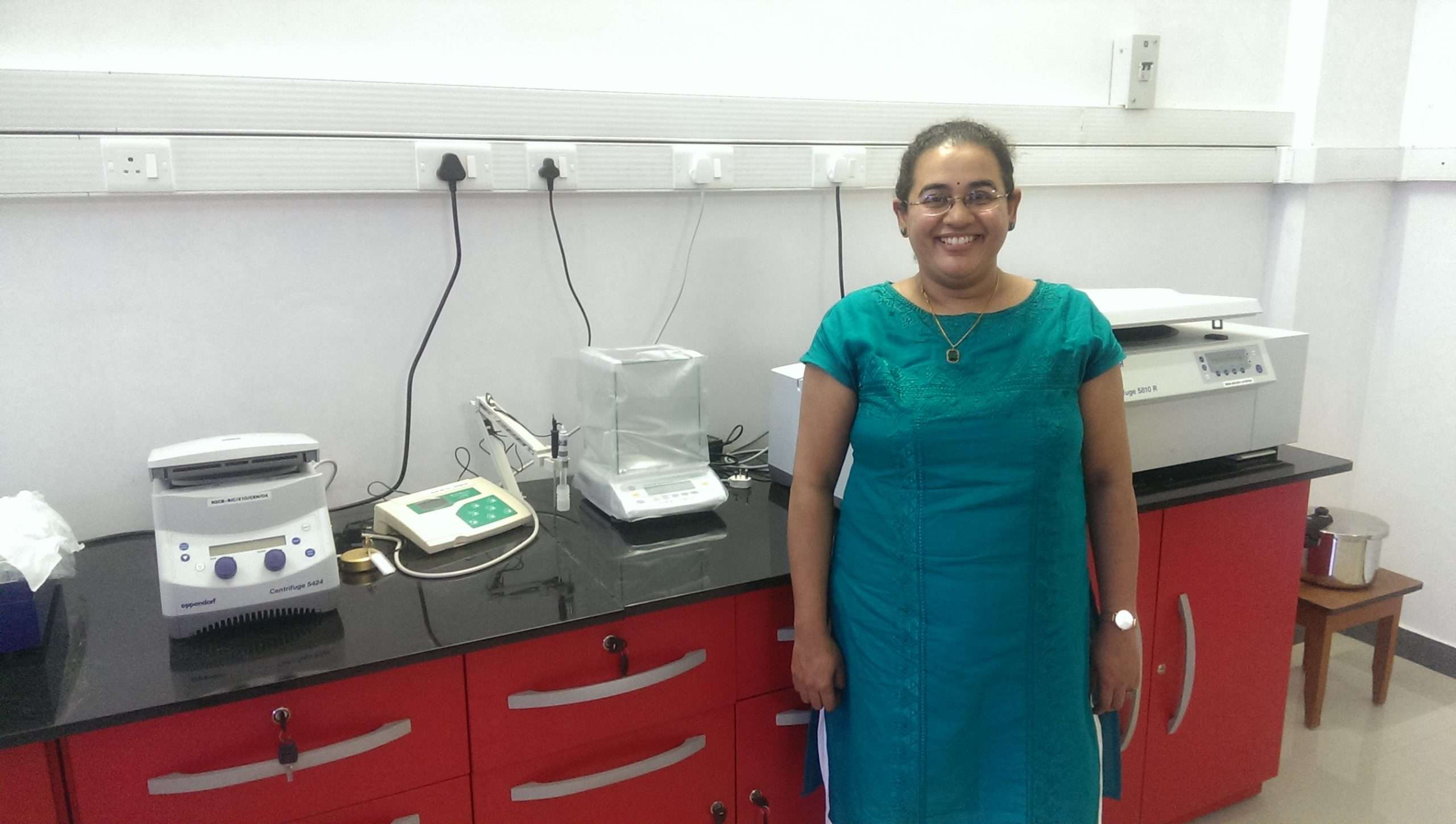 Funny, candid, humble and wise, Radhika Nair makes life in research look good. Before she moved to the Rajiv Gandhi Centre for Biotechnology in Trivandrum earlier this year, the molecular biologist had worked in Cambridge and then in Sydney, where she found her calling – cancer biology.

More specifically, Radhika studies why cancer cells ‘move’ or metastasise. Metastasis is when cancer becomes serious because it marks the spread of the cancerous cells from their origin to other parts of the body. Only some, about 0.1%, of cancer cells, are able to successfully make the transition – they need to jump aboard the blood stream, get out of the tumour and then lodge at a new site and enter a new organ.

Summing up her research questions, Radhika said: “Metastasis is a long journey for cells, through many nasty environments in the body. Only a few cells can make it. Is it a predetermined quality of a cell that makes it able to metastasise? If it is, then we can target such cells and stop them. Or is it random?” And that’s not all. Why do the drugs that work on primary tumours not work on cells that have moved to other places?

Secondary tumour deposits in the liver from a primary cancer of the pancreas. Credit: Wikimedia Commons

To answer these questions more efficiently, Radhika swears by her pet technique which is based on single cell technologies, i.e. studying individual cells that have metastasised rather than the traditional way of studying bulk cells. It’s an expensive method, she said, but one that enables us to finally answer these critical questions (see previous para) and move on to therapeutic solutions.

Radhika calls her path to cancer biology unconventional and rather twisted. A project on malaria vaccine that she worked on at the Tata Institute of Fundamental Research (TIFR), Mumbai while doing her Master’s degree convinced her that research is what she wanted to do, though she wasn’t as yet sure of which area.

Her initial plans to study further in the US didn’t materialise as she did not get the full scholarship that she was adamant about. However, she did manage to procure a Ph.D. position at National Institute of Immunology (NII) in Delhi. “NII was a damn good programme, a great experience scientifically and personally too.” Radhika worked there on germ cell death, an area that she notes is sort of the opposite of cancer (where cells grow uncontrollably). “When I think abt it now, maybe my journey was making its way then.”

During the final stages of her Ph.D., Radhika got married and had a child, so upon completion, she decided to take a break to spend more time with her six-month-old son. When after a couple of years, they moved to the-the UK with her surgeon husband, Radhika decided to start reapplying.

Coming back to science as a mother

“People say there is no bias against women who’ve taken a break but believe me there is.” Radhika admits that now that she is on the side that is hiring, sometimes this hesitancy is legitimate: “The thing is, if you take a break for maternity in science, it’s not just the one year you miss out on because by the time you can restart it takes twice as long. It’s so competitive that two years can be a lifetime.” She adds that in India women continue to be the primary caregivers so working women have to be smart about their choices. “It’s not easy; you literally have to be changing diapers in the morning and then come back to high-pressure science.”

However, Radhika does not see why worthy candidates are still given such a hard time. “You’d think that if a woman wants to come back, applies to places like Cambridge, gets the fellowship, then it means she has something in her!”  While she believes that selection processes are better these days, she acknowledges the need for more. “Everyone says the right things but if you scratch the surface they are worried if women will be able to cope – but we can do it. There are enough of us who are living proof.”

Things eventually worked out well for Radhika, who earned herself a spot as a postdoctoral scholar at the Medical Research Council at Cambridge University. She laughingly recalled how her boss there used to push her to the forefront during equal opportunity seminars. “I ticked all the wrong boxes. He used to say look at her – Asian, woman, under-30, with child – I’ve hired her, I’m totally equal opportunity!”

The next step in Radhika’s career came with her relocation to Sydney. It is here, while working with Alexander Swarbrick at the Garvan Institute of Medical Research, that she started focusing on cancer. 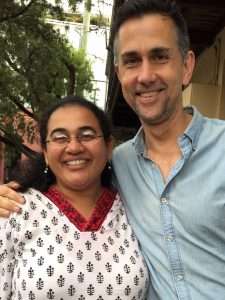 With her mentor Alex Swarbrick 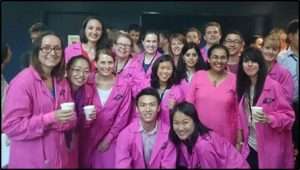 Her team at the Sydney lab

But it took a rather tragic event to make Radhika realise that breast cancer research is what she wanted to dedicate her life to. Her friend Nidhi, a neurologist, was diagnosed with the same disease. Sadly, Nidhi didn’t make it, but Radhika used this shock to fuel her fire. “Until then I had no idea what I would do. I made a promise to Nidhi that I would keep going. Not that I’m going to find a cure or anything but it keeps me going when things get hard.” Such lessons in life have influenced Radhika, even in her teaching style. “I make my students go to oncology meetings to put a face to the disease. It’s important to not see them as just samples but to know the suffering the person is going through.”

She described one of her significant findings while in Sydney: “There are genes that predispose you to breast cancer. One type of cancer, the her2– type cancer, is marked by huge over-expression of the myc gene. Patients who over-expressed both myc and her2 did much worse than those who over-expressed only one gene.” With her research group, she wondered, was there an interaction? Indeed, their experiments proved that there was.

They found that another molecule was driving this interaction between her2 and myc. If they knocked down this molecule the model mice, the ones they did the experiments on, did much better. In the course of her time there, Radhika became known for developing cutting edge in-vitro (in lab conditions) and in-vivo (in living cell conditions) models for breast cancer.

Radhika is not shy in admitting that she relied heavily on her family to take care of her son on those important days. “It’s tough, especially in the first few years of having a child. My parents were around, so I had incredible support,” she said. “My mother jokingly calls herself IAS – Indian Ayah Service.”

Finding her way back

But she soon realised the scenario was starting to get a bit unfair for her parents. “It’s a long journey for my parents to visit us so often.” The alternative was a scary one. “I was so settled in Sydney. Things couldn’t be better, they were finally chugging along, but the time had come to make a choice.” In 2010, the family began discussing the possibility of a return to India.

Once it was decided, Radhika had to make preparations by giving talks in India over the next two years, applying and eventually being awarded the Ramanujan Fellowship (constituted to bring back scientific talent to India) and building a network.

India is finally opening up. More and more scientists abroad are returning to India – the funding situation in the US is also getting tough, many fear they will be stuck as eternal post-docs – so there is competition. The scene is slightly better in India said Radhika, who is now setting up her lab at Rajiv Gandhi Centre for Biotechnology in Trivandrum. “You get less money of course. You may have to downsize your science a bit. There’s a wait before your research can build up.”

With her project assistant Reshma Murali at RGCB

Radhika has a plan. “I’ve given myself five years. It takes two to set stuff up – models, equipment, cells, assays, etc., then in year three I want to start publishing. I hope to start recruiting PhDs by the end of this year.”

Radhika came to India with her eyes wide open. “Indian institutes are so understaffed and underfunded. I want to transfer my skills and train another set of students the same way I was lucky to be trained.” “I love the UK and Australia but this is home. I’ll be here, see where it takes me, till they kick me out,” she laughs.

India as a scientific destination

India has a huge requirement for breast cancer research and awareness. “Though India has fewer cases than the US, 50% of them don’t make it because they come into healthcare so late.” But Radhika feels this depressing scenario can be corrected. “Surveillance programmes can help, as can teaching girls at a young age to check their breasts. The shame has to go. There’s nothing wrong with your body and you know it best.”

Students pursuing science in India have it good, believes Radhika, but you have to aim for the top. “In the beginning, a woman may have to be ready to work twice as hard but at a point, it becomes a level playing field. There are boys clubs, but I don’t care about that. I’ve been lucky to have had mentors who don’t look at us as women but as scientific colleagues. That’s why you aim for areas of excellence because that’s where you find people like that.”

Another piece of advice Radhika has for young researchers is to be a little more open to their definitions of success. “In India, it’s still considered a failure if you don’t become a PI (Principal Investigator). But not everyone is meant to be a PI, some are meant to be Project Assistants. Do what fits you, what you’re happy with.”

On preventive mastectomies and the Angelina Jolie episode

In 2013, popular Hollywood actress Angelina Jolie inadvertently set off a media frenzy with her announcement that she had undergone a preventive double mastectomy (removal of both breasts). Radhika says that this was not such a radical decision for someone like her who had the risky BRCA1 mutation, came with so much family history, and from an ethnic background that made her 75% likely to develop breast cancer. “Sure, that means there is a 25%  chance you might not get it, but she made an informed choice. She’d already had her children and so she’d rather remove the things.” Radhika believes such choices are personal and should not be passed with judgement. “It’s like with smoking. If a person still does it, it’s her choice and she has to bear consequences. At same time, people who’ve never touched a cigarette may still get lung cancer.”

Hats off to Radhika for defying all odds in her professional and personal life to pursue research in such an important field. It is a boon for our country when scientists after acquiring expertise abroad come back home to pass on their knowledge to those who may not get such opportunities. And Radhika, I am glad that you get your students to see the faces behind the samples which will definitely urge them to pursue their research with more vigour.