WHO? Dr. Monica Bhatnagar WHAT? Microbiologist WHERE? MDS University, Ajmer, Rajasthan Reported by Aashima Dogra On a rented bike, I made my way to Maharishi Dayanand Saraswati University in Ajmer. The afternoon sun chased me down as I continued on the lonely road through the empty desert spotted only with thorny bushes. Soon after, I […] 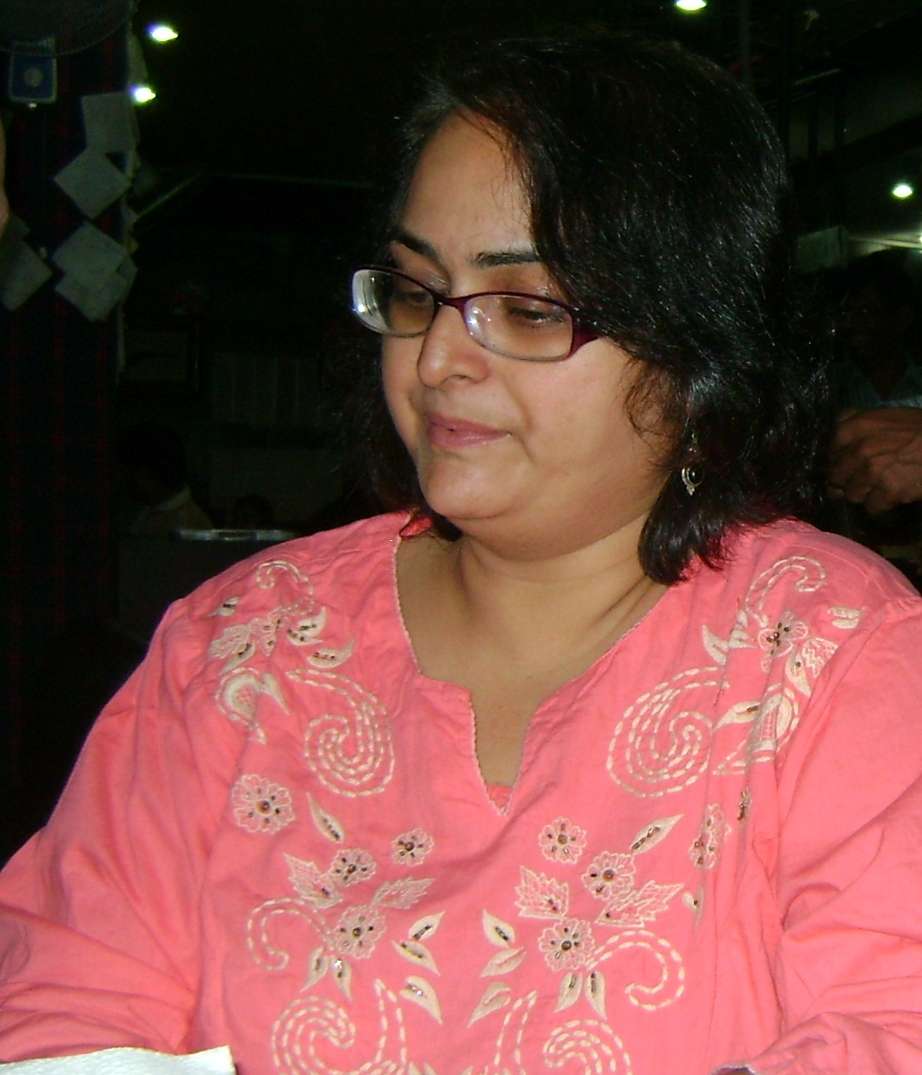 On a rented bike, I made my way to Maharishi Dayanand Saraswati University in Ajmer. The afternoon sun chased me down as I continued on the lonely road through the empty desert spotted only with thorny bushes.

Soon after, I turned into the 29-year-old university. Matching the contours of the surrounding desert, the campus looked sandy and sparse. A few students roamed the few buildings spread out in the vastly empty space. Not a place that asserts “dynamism” as it claims on its website, I thought.

As I found out in  conversations with researchers there, the situation is worse than it looks. The university has had not recruited any teaching staff in the last 10 years. The research departments lack funding and all but two of them can’t even afford to run undergraduate courses. The researchers are offered little help to patent their work, reach out to industries or collaborate with other research groups.

Making the most of what they’ve got

The existing 20 faculty members are holding the fort at this state university that seems to be forgotten by the Rajasthan government. Most of them are doing their own research and teaching postgraduate students while also performing administrative duties.

One of them is algologist (one who studies algae), Monica Bhatnagar.

“I am sort of a freak,” she said. “Any organism I come across, which I haven’t seen before or don’t know about, I have a tendency to start some work with it.”

An example is her recent fixation to Daphnia (a crustacean like a crab, half-a-millimetre in diameter). “For the last 15 days, I’ve been working with Daphnia. There is a small pond close by to the university. Whenever I passed it I saw its colour change. In the morning, it is red and in the evening it is green. I was curious about what is going on in this pond. I found out it had Daphnia in it. I isolated it and now I’m trying to teach my students how to work with these organisms to give them some experience. And I feel it is something new – it gives them a break from regular lab work –  so they get interested in exploratory scientific work.”

Lab as home and vice-versa

Monica’s scientific life and personal life blend together nicely. At work, she shares her office and laboratory with her husband Dr Ashish Bhatnagar, also a microbiologist. At home, the Moringa tree in their backyard inspires her to develop a ground-breaking medical product (more about this later).

The microbiology department at MDSU is run a little bit like a home. Since they started in 1997, Monica and Ashish have together raised 462 students so that they may find secure futures despite the increasing hopelessness they see outside. “We are training them in wine-making, mushroom farming, Azolla plantation, producing algal biofertilisers and constructing algae bioreactors so they are able to have a small enterprise of their own.” The couple fear that coming from a small university like this one may hinder the students’ chances of finding jobs in science, which they recognise are already in short supply.

“Just the two of us have been running an M.Sc Microbiology course since 1997; for a few years, we also ran M.Sc Biotechnology, which was self-financed. We are not running this course any longer because we are just two people in this department. It was sort of an injustice: the university promised that they will be able to catch hold of some teachers but no recruitment has been done despite many campaigns by us and students.”

“The state government does not allow any recruitment. I think because they don’t want to, they say we don’t have funds – of course, they have funds for everything else but for recruiting teachers.” Both of them hold the rise of private universities in Rajasthan responsible for this sorry state.


“Yes, some other state universities have been recruiting but our university has been sidelined for many years.”

Hydrogel, a gift from the desert

It may only be the thorn bushes that stand out in but as Monica has found, the desert is teeming with life, especially microbial life. She began studying the biodiversity of microbial life of different desert areas in her proximity in her initial years of lecturing at Ajmer. She then went on to study how these organisms adapt to high temperature and lack of humidity in this environment. Later she innovated a “Hydrogel”, an alternative to bandages.

“The earth’s surface in this arid region is dominated by Cyanobacteria. And the forms you find here are specially adapted to extreme dryness,” she explained. “To overcome this stress these organisms produce a lot of mucilage (a sticky substance made of a carbohydrate polymer). Mucilage helps them to slowly lose water and slowly add water. Their physiology needs time to adjust itself, to slow down its mechanism and survive.”

Monica extracted this gummy substance and combined it with a synthetic polymer to make a slippery wound dressing that “doesn’t yet stick to the wound”. This Hydrogel is much better at protecting wounds than bandages. It also fastens the healing process.

“We have tested the Hydrogel on mice at the animal studies facilities at Banasthali University (also in Rajasthan). The results were very good. A wound treated with Hydrogel took 6-8 days to heal whereas ones without the dressing took 15-20 days.”

Aren’t we supposed to keep  wounds open? This is an outdated idea, according to Monica. “Now the theory has changed. For healing, the wound should be kept moist, it should not clog and the dressing should be breathable and maintain moisture.”

“If you think about it, it is obvious why,” she says. “When the wound is healing, there is a lot of cell movement. This movement is smoother if the wound is kept moist.” She commented that most Indian hospitals are yet to catch up. “They give you regular services using bandages, they put cotton as a base with some ointment. People and even doctors are not aware that for healing this is not very helpful.”

Monica has prepared similar Hydrogels with plants also. The Moringa tree, especially, is a muse of hers. “The Moringa tree is like a medicine cabinet. We’ve been eating pods of Moringa for many years. One day, I was cooking the pods and saw the liquid inside them turn thick. I thought this must also be some kind of carbohydrate polymer. So now I made some Hydrogels with Moringa.” She said she’s also tried this with Acacia.
With little bit more work, Monica believes her Hydrogel can be a marketed medical product. She still has to attach something to it that makes it stick to the skin and also chemically reduce the amount of synthetic polymer used in the composite so that it is a completely natural product. However, she is aware that things look meek for an industrial collaboration at the university. Plus, she informs me that lack of funding makes it hard for them to go into the depths of any particular research.

Monica and students prepare a pit for biofertilizer production

One of the lucky ones?

In spite of all this, Monica believes she is lucky. She sees how few options are laid out in front of women around her. The culture of early marriage and hasty motherhood in Rajasthan overpowers lives of too many women. Many of her students, even the men, are already married.

“How many in-laws will let their daughter-in-laws go this far? I had the support of my parents and then my in-laws. My husband has always given me space and respected my identity. Unfortunately, not a lot of people think like this.”

Admirably, Monica and Ashish are each other’s strength, even scientifically. They have their own niches that are complementary to each other. She is focused on algae biopolymers and he works on pollution remediation and mass cultivation systems for biofuel production. He has a strong hold on ecology and her specialisation is biochemistry and physiology.

“It has been a very good journey. If I have to take care of one part of my life work or family, he will look after the other. There is always that support available. And then you are together. Usse behtar kya ho sakta hai (What can be better than this)?”

6 responses to "Monica Explores Life in the Almost Lifeless"

Nice article giving detailed description as if reader itself has visited the place. Hydrogel is good concept and must be prove useful in medical sciences. congrat to the couple working parallelly and keeping their identity intact. Hydrogel concept can also be useful in water conservation in arid areas where evaporation is high… we need indigenous innovation and journalist like u can link the end.

Hello Poonam. Thanks a lot for your wonderful comment and suport. We will be very happy to mediate such a collaboration between water scientists and microbiologists. let us know if you have something or someone specific in mind. Monica will be happy to hear about this.

Hello Poonam,
Thanks for the appreciation. Hydrogels are useful in water conservation. In this case however we need much too cheaper material. For which I am open to work further and will appreciate any collaboration.

Commendable work is being done by Dr Monica and Dr Ahish .My best wishes to both of them.

I have been a student of this duo since 2001. They works hard while complimenting each other. In 2001 this department was lacking instruments and basic facilities but their efforts have enriched the department many folds. The only department of microbiology is this part of country whose students are placed in institutions of national and international level.