A chat with environment biotechnologist who invented biosensors for water pollutants in Varanasi and is the only woman director at Benaras Hindu University. 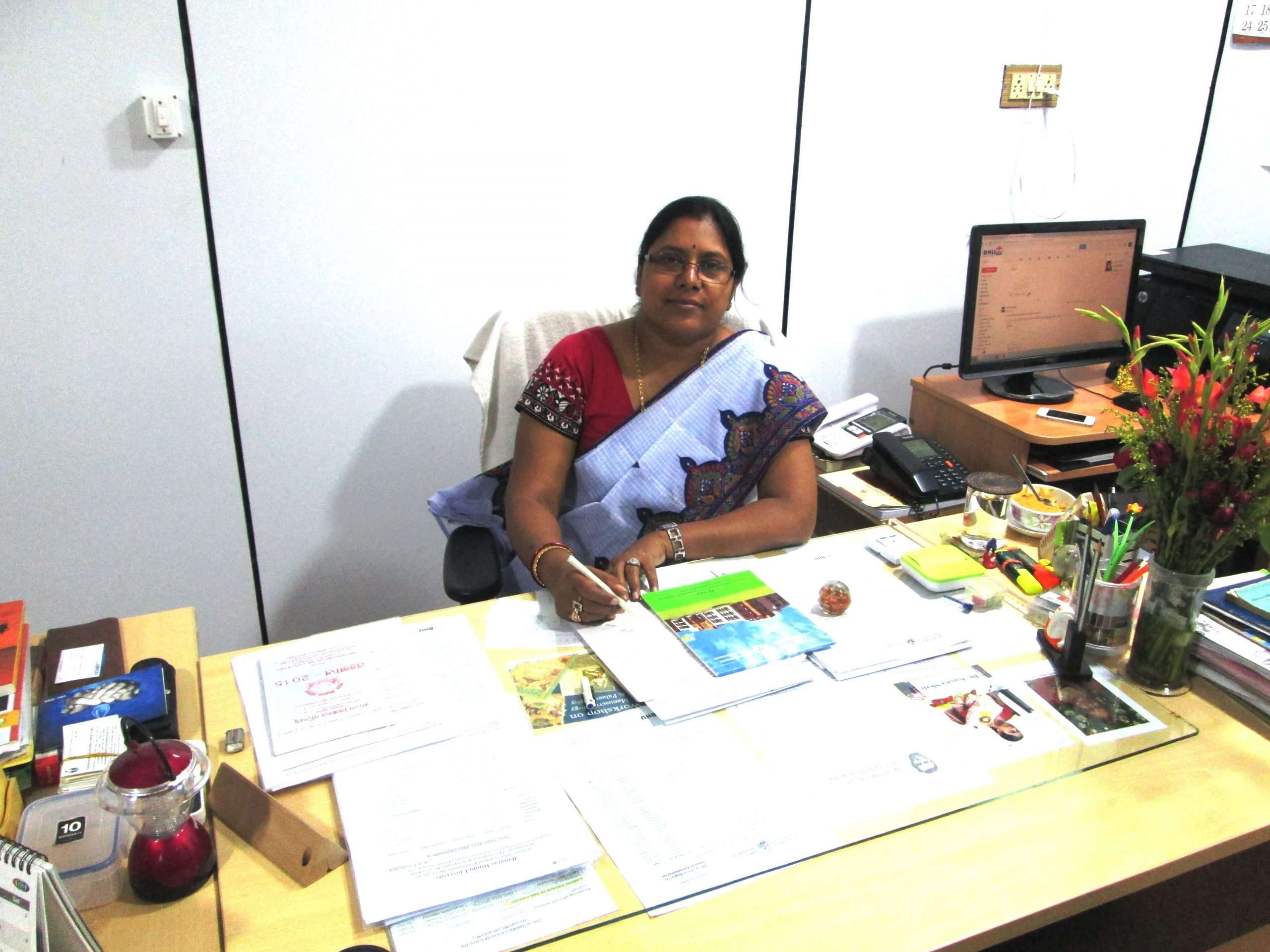 WHERE? INSTITUTE OF ENVIRONMENTAL AND SUSTAINABLE DEVELOPMENT, BHU, VARANASI

As I waited outside Kavita’s office, she was inside, shaking hands with a delegation that conferred her the title of Director – one of six directors at academic institutes in Banaras Hindu University. “As of now, I am officiated,” she told me later, hardly controlling a beaming smile.

She is now the only woman to hold this top position. She has been was one of the only two female Deans among 17 faculty members at the 100-year-old university at time of interview. (You will hear about Ramadevi, the other female Dean at BHU very soon on this website.) In Feb 2018, Kavita updates us that her tenure as head and dean has ended but she still is the only woman Director at BHU, an institute of national importance infamous for dealing with sexual assault irresponsibly.

The climb to the top hasn’t been easy. But Kavita tells the story of her 22-year-old scientific life as if she was describing events of a vacation full of adventure.

She started as a Chemistry student at the women’s college at BHU named Mahila Mahavidyalaya (MMV). She earned a Ph.D. from the same university soon after. Following stints in Japan, Geneva and NEHU (North East Hill University) in Shillong, she found herself coming back to teach at BHU.

Scientist without a lab

When BHU offered her a lectureship, Kavita was very confused. “I thought I had interviewed for a position in the faculty of science at BHU, not for MMV (which operates separately from the main faculties of the university). This was one thing I was not expecting.”

At this time, Kavita was already a researcher pursuing post-doctoral projects that required a functional lab to carry out experiments.

Kavita decided to take up the challenge. What followed was two years of elaborate administrative procedures, several meetings and pleas for funding to set up a Central Instrumentation Laboratory – a deck of important scientific instruments including spectrometers, microscopes and lasers – inside an examination room at MMV.

“Research at MMV had totally stopped years back. I was the first researcher to set up a laboratory. I had to convince the higher authorities that the science building of MMV is not justified without a CIL and that I was willing to bear all the pains required to set up one.”

“For the laboratory, I got just a bare room with four walls. Finally, I did all the designing, drafting,  sanctions for AC, ducting, water channels with proper lines, electricity, wiring and equipment. In fact, I was in charge till I left MMV and joined this IESD.”

“Even today, the same instruments that were bought with the first sanctioned 50 lakh are still in use.”

Kavita in action at the lab

Biochemistry to the rescue

Even in her science, Kavita shows enterprise. She jumped from enzyme biochemistry into environmental biotechnology with the idea of using the same enzyme that she had worked on as a chemist. From this enzyme, which comes from waste left behind after a rice harvest, she has developed sensors for detecting biomolecules, nanoparticles, pollutants and dyes.

In Kavita’s crown, two jewels shine the brightest. One is the enzyme-based sensor of the neurotransmitter dopamine, for which she was recently decorated with the ‘Women Scientist Award 2011’ from The Biotech Research Society. The ‘rice-peroxidase-enzyme-biosensor’ is a novel discovery that can monitor levels of dopamine in neurological patients to help  administer proper dose of the drug to patients with Alzheimer’s/Parkinson’s diseases. “We have patented this sensor already and we are working to refine it for higher sensitivity. We are also looking into commercialisation of this.”

Kavita’s awards hanging in her office

The second highlight of Kavita’s research are the biosensors and bioreactors she developed to detect and break down pollutants in local small-scale dyeing industry in Varanasi.

“Dye houses are small units using chemicals affluents. They discard the waste water directly in the soil after dying, but this water ultimately comes to their own tap water and drinking water or their agricultural land. It gets accumulated in the water table and then there is no way to remove it. To avoid such contamination we are preparing to give dyers the small instruments (the bioreactors) at a very low cost so that the contaminated waste water can be treated. So that they can at least protect themselves and throw waste-water in the soil without contamination. The main toxic part can be removed partially – that is our main aim. We have a prototype for testing it. We haven’t published any papers yet.”

Along the way, Kavita managed to earn several grants from home and abroad. The result is 75 scientific publications.

Amusingly, all along the interview, she managed to keep hidden juicy details when I prodded for specific information on unpatented and future work. She skimmed through with slick diplomacy.

She did, however, hint at some exciting projects her research group is undertaking including one which questions the burning ritual on the river Ganga based on alarming levels of silting seen there.

“We are working on water quality management and different components that are yet not been reported as pollutants in Ganges. Also on the burning ghats – to what extent is it (the ritual) contributing to the socio-economic factors and is it actually required or it is something extrapolative.”

Indian universities and scientific institutes could use more leaders like Kavita.  Her vision is clear and her endurance shines through. Her people skills have clearly been a major asset that has helped her along the way.

Oh and she can also play the sitar.

The trick is devotion

The secret to Kavita’s success seems to be her resourcefulness – she is able to recognise what is needed to get the job done. She fully accepts the situation and finds her way around it.

In her experience, there are only two kinds of women who can go very far in research: those who have support from their families and those who rebel against the oppression.

The trick she says is devotion. “As a woman researcher, you cannot deny that you have to take care of family and in spite of that, you have to excel in your work. In that view, I can say that a person who is not devoted can never be a good researcher, especially a woman.”

“Definitely a woman needs to contribute at the both ends and it is not possible to leave everything and completely devote towards research.”

Below are Kavita’s comments on how universities and families could take steps towards equality.

How can science become more equal?

Kavita: It is important that higher authorities in universities are more open-minded. A very cordial relation and a spirit of mentorship are needed. Women should be given an equal platform to have their say. They cannot be just sitting in a crowd and totally unheard.

Main positions should be given to women to show that they can also be good administrators. Women are more humanitarian in approach because their instinct is like that. I feel at least one senior position should be occupied by a woman.

Any comments on the family system and society?

Kavita: I am associated with a local girl’s school. I notice that by the time they are in class 12 they are married so they are deprived of further studies. Parents need counselling, but there are other constraints like poverty, big family size or safety issues. The unawareness of scholarship schemes by the government is also a problem.

What about after marriage?

Kavita: I did all my education after marriage. I did my MSc, B.Ed, Ph.D., a couple of post-docs, then taught at NEHU and completed three more post-docs here. So I would say it’s all your will. Women tend to give up for the family, they succumb to the pressure and give up. It is that point where they need to think judiciously. When you start looking for a way the way comes to you. It is you who pave your own way.

Banaras Hindu University has had many Female Deans and also Directors of Institutes in the past. The caption needs to be corrected. Also there are more than 125 departments, and not only 17 as mentioned in the above article.

Thankyou for taking the conversation forward. This article reports on the number of departments and department head positions available plus the number of those held by females at the time the interview was taken. We will be very happy to update this report with more information on female leadership in BHU’s history.

Reply
Pingback: BRAIN GAIN WITH RAMADEVI - The Life of Science