Elizabeth has travelled all over the country in her search for the seven species of Cyrtophora spiders found in India. The young taxonomist talks about her journey here. 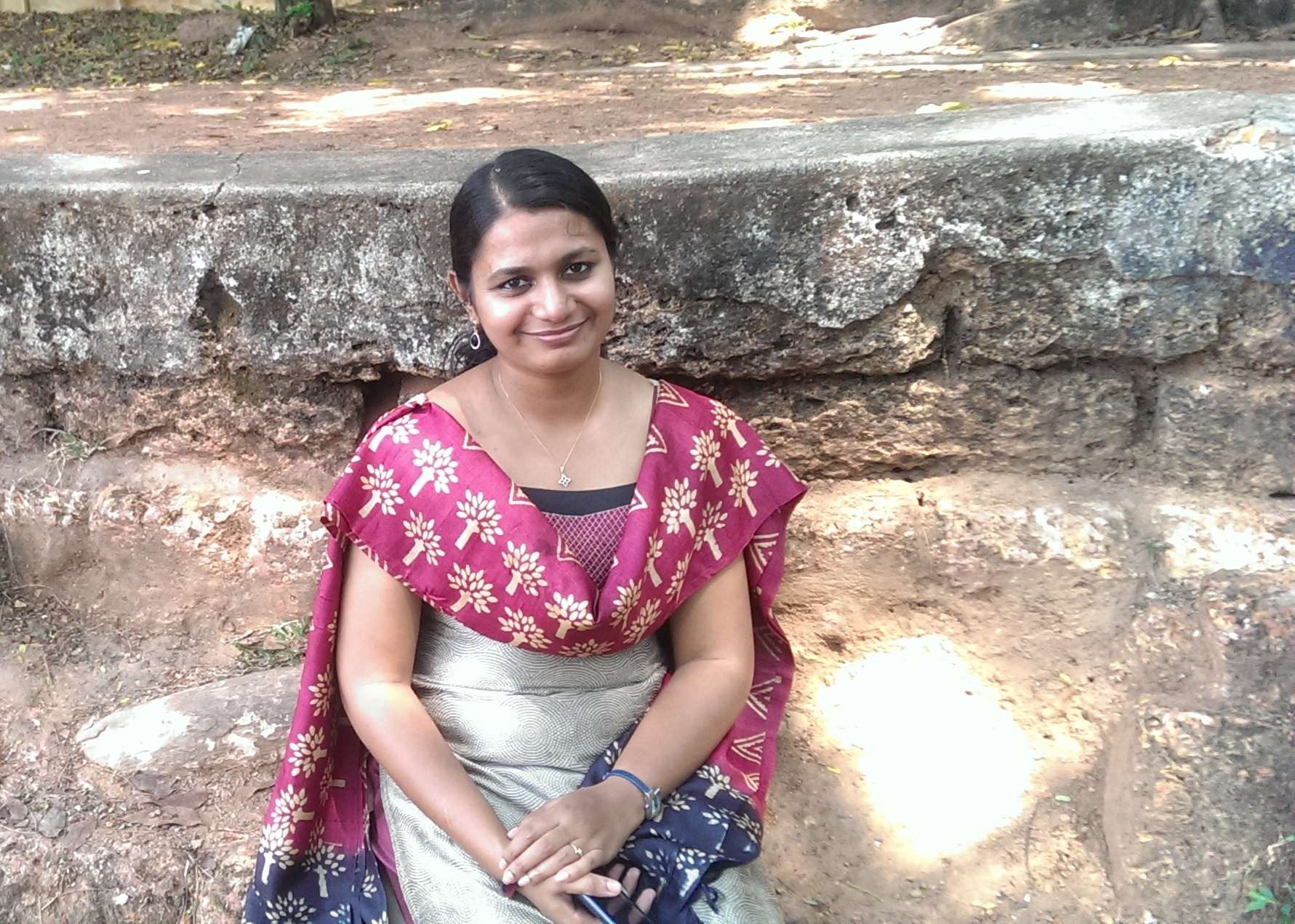 “Tarantulas are beautiful,” said Elizabeth V. Mathew. We were talking about the irrational fear of spiders.  Tarantulas have enough venom to cause necrosis that results in loss of limb in the rare chance one bites you, she conceded, but most spider paranoia comes from a misconception. “We let their appearance creep us out but actually almost no spider species is lethally venomous, at least in India.”

Liz was bitten by the spider bug since her first year of studying zoology at Sacred Heart College in Ernakulam. The college houses one of India’s few arachnology-devoted research centres so Elizabeth was in the right place. Once on a scientific trip abroad, accompanying her professor to a paper presentation on spider research, she decided that spiders would be the topic of her Ph.D. thesis.

Since most spiders are cannibalistic, it’s a futile effort to try and rear them. “The females (‘almost always predominant in the animal world’) eat their partners after mating so mixing them together is a bad idea,” Elizabeth explained.

This means that to study spiders, you just have to get out there. “It’s an all-out search,” said Elizabeth, whose Ph.D. project involves the taxonomy of Cyrtophora spiders. “From the architecture of their webs, you can predict what kind of areas you will find them in.” In the case of Cyrtophora spiders, their inverted tent-like three-dimensional webs mean that they cannot live in between huge trees but only amidst small shrubs. 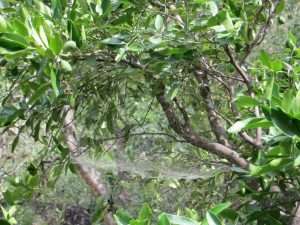 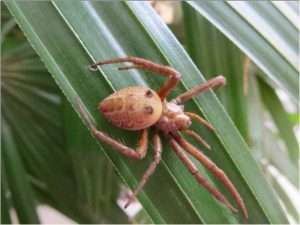 Once she spots a spider, she takes photographs, puts it in a specimen bottle which contains alcohol. At the lab, she observes it under a stereomicroscope (used to examine specimens where the field of study needs to be wider than a regular compound microscope allows).

However, spiders are best spotted early in the morning and late in the evening when the sun isn’t bright enough to drive them away. “Most of my colleagues walk along long stretches like railway tracks in hope of finding their targets, but to do so at these times for women is a risk,” said Elizabeth.

Risks are part of the game

Elizabeth has travelled all over the country in her search for the seven species of Cyrtophora spiders found in India. Very matter-of-factly she recalled how she once trekked across a forest in Tamil Nadu with a team of only men. “I just had to trust that their intentions in accompanying me were honest. In the chance that I was wrong and they wanted to harm me, then not even a trace of me would be found.” I must have looked alarmed because she went on to assure me, “It’s all part of the game. You have to be careful and accept that we’re not as free as men are.”

The only region she is yet to go spider hunting is the north-east. “The north-east and the Andamans are virgin areas with respect to spider research,” she said. They have much to offer but it’s difficult to get permits and conduct studies there. Nevertheless, the young arachnologist is determined to fill this gap very soon.

Elizabeth, 27, is currently an assistant professor of zoology at Union Christian College, Aluva, a small but busy town a forty-five minute bus ride from the city of Ernakulam in Kerala. She is continuing her Ph.D. research, but on a part-time basis to allow herself to pursue her lifelong love – teaching. 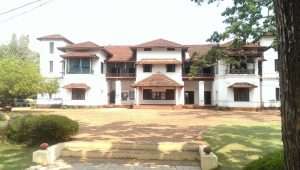 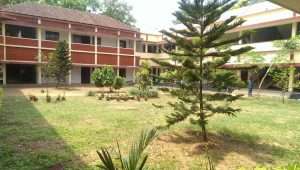 The building that houses the zoology department

Ever active in cultural activities and public speaking events right from school, Elizabeth considers herself too sociable to be limited to research. “For that you need to be an introvert whose only interests are lab work, field work and publishing. I’m not that kind of person. I like to be involved with people,” she said.

The pure sciences may have lost its popularity to more specialised courses like biotechnology, but it’s coming back, observed Elizabeth. “Many students are choosing to pursue the basic sciences in hope of landing a college lecturer post, which has become very lucrative.”

Zoology is particularly exciting because of the exploration involved. Elizabeth is sorry that dissections have been replaced by computer software. “Dissecting frogs can be sadistic but I think it is okay if lower animals like the cockroach could be studied,” she opined. “Looking at the computer screen to observe an animal’s cardiogram is not so interesting for students.”

Elizabeth’s years of research in arachnology no doubt influences her teaching philosophy. “You (a student) have to go out and see for yourself,” she says. Elizabeth frequently comes up with projects for her students that give them a chance to meet the species around them (there was one scheduled for the day of my trip to Aluva but lucky for me it got postponed).

“Recently, some of my students studied the biodiversity in ‘sacred groves’ in Thrissur,” she recalled. Sacred groves, known in Malayalam as ‘kaavu’, are pieces of land traditionally set apart by Hindu families as an abode of gods and goddesses. “These spots are protected and generally avoided by people and as a result exhibit rich biodiversity.” 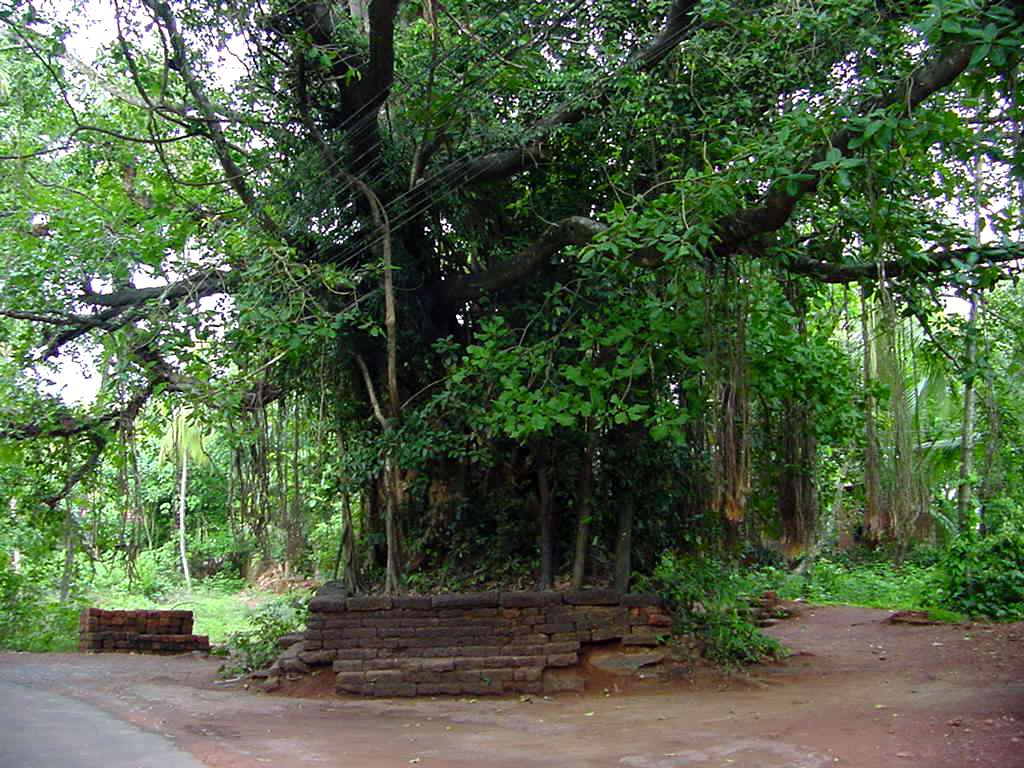 Of course, students do tend to prefer easy assignments restricted to lab work but usually with the right push and orientation, Elizabeth finds that they enjoy their outdoor assignments.  “I might be young, but they call me a tough nut to crack!”

Elizabeth thinks it would be great if teachers were given some time within their working hours to devote to extracurricular activities and research. “This would help keep away boredom, but we are so pre-occupied with completing the syllabus that we miss out on this.”

Though girls outnumber boys in Elizabeth’s zoology course, most of them have been brought up conservatively. “Since they are usually home all day, they enjoy these outings,” she said. “For them, listening to me tell my stories is like watching a genie coming out of nowhere!” she laughed.

Elizabeth tells us why spiders matter

Because they are one of the least studied groups to date and several species are at risk of extinction as their habitats get degraded.

Because they are an important part of our biodiversity! Because we’d lose out on a crucial predator, a natural pest control system, in the ecosystem.

Spider extract has shown to be medicinally important, and there is a gold rush to exploit the marvelous properties of spider silk. We’re waiting for someone to figure out a way to express it in large quantities and make it economically viable.

Taxonomy is the science of describing and classifying species based on different properties. It’s important to classify and make documentations of biodiversity of an area that can be understood and compared with other areas. Only if we do this will we be justified in labelling important spaces as biodiversity hotspots so that they can be given special protection.

Success (for now) in saving spiders from the Aranmula Airport project

One of Elizabeth’s colleagues published a study that revealed the existence of many rare endemic spiders in the area where the controversial Aranmula International Airport was proposed. This was one of the many environmental studies that strongly advised against the project and led to the National Green Tribunal stalling it in 2014.

4 responses to "Elizabeth and her Eight-legged Friends"

Elizabeth’s story as well as the stories of all the other wonderful scientists written here are very admirable and inspiring! Thank you, Aashima and Nandita, for starting this blog and more power to you and all these successful women.

– A woman in science

Thank you, Susan! You folk keep us going. If you don’t mind sharing, do tell us where and what kinda work you do 🙂

scary, but life goes like this. if one has motivation, nothing can stop him or her to stop doing. There are many successful stories in past and present, but it matters how content one is after reaching certain platform. Many young children who are struggling now a days would definately get motivated through these real stories. 👌

Reply
Pingback: International Day of Women & Girls in Science - The Life of Science